Aintopf from Spiegel: Hitler, Smolensk and again Russians are to blame for everything! 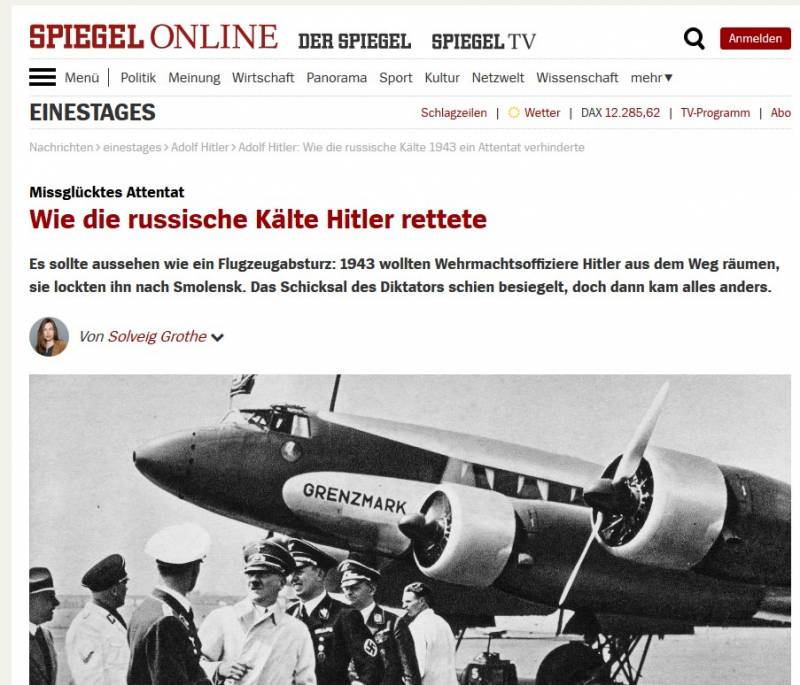 The Germans have such a dish, Eintopf. We have no analogues, in principle. It's like a hodgepodge, only with the addition of beans and pasta. In general, something else brew. But according to the Germans, tasty and satisfying. The main thing is to get into the cauldron, which is at hand. 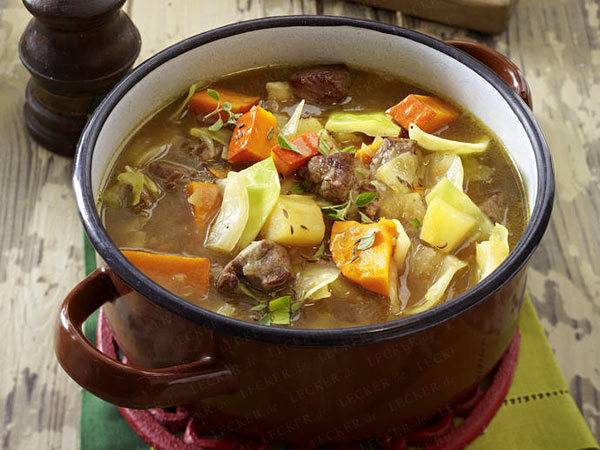 We are considering an Eintopf brewed by Frau Solveig Grothe from Spiegel magazine. Such a conscientious Eintopf, where Hitler, Stalin, Germans, Russians, Poles, Russian Frost are dumped in one pile.

Smolensk combines all this.

It would seem that frau clung to the Russian long-suffering city?

And everything is simple. In 1943, in Smolensk, a group of officers wanted to kill Hitler. Here, of course, everything is piled on the heap: another Hitler's secret bunker in Red Bor, called the Bear Den, and the arrival of Hitler, and an unsuccessful attempt.

An attempt was really planned. At first they wanted to shoot Hitler trivially, but the “rear” turned on von Kluge. There are many versions: either Kluge was afraid of the consequences for his family as a receiving party, or, as some sources describe, he was afraid of the massacre, which the SS guards from Leibstandard would definitely do.

The fact of the matter was this: von Kluge was afraid of himself and categorically forbade shooting von Treskov.

Because Hitler decided to blow up on the way back. Putting an explosive device into the plane under the guise of a parcel with brandy for the General Staff officer.

The “package” did not work, allegedly because of the frost, which didn’t allow something to be done by the mechanism. Okay, not our problems, after all.

All that they tried, but the gentlemen the Germans could not do, turned out perfectly for the Russians, who brought Hitler to samovypil two years later.

Let's return to the article. What is so frankly idiotic I found, since I am writing about her?

Yes, the whole article - dope and brew. But - in the German style. This is not an easy French croissant for coffee, this is an Eintopf, it should be understood.

The Germans should be, according to the proverb, in order. And since Alles has a place to be in Ordnung, this is what happened with Frau Grote.

Hitler wanted to kill in 1943, near Smolensk. The assassination was prepared by Major General of the German Army Henning von Treskov and his adjutant Fabian von Schlabrendorf.

Field Marshal von Kluge forbade the conspirators to shoot at Hitler during lunch.

Schlabrendorf and Treskov packed explosives in a box, and Treskov asked Heinz Brandt, who was accompanying Hitler, to hand over a “gift” to Colonel Helmut Stief.

The charge did not work, as if the frost had disabled the detonator. It happens.

Treskov returned the charge to the one who made it, Rudolf-Christoph von Gersdorf. For revision like.

And on this everything seems to be история is over. But no! Soup only boil!

Later, Gersdorf supervised the supervisory service during the exhumation of the remains of Polish officers at Katyn, the mass graves of which were found by representatives of the Wehrmacht.

And the aforementioned Schlabrendorf exercised legal control and execution of all documents.

As I understand it, Schlabrendorf was included in the list of conspirators just for this moment. Generally, only Treskova had complaints against Hitler, and he coped with all the moments in a completely normal manner. But where and how Schlabrendorf helped him - is not known for certain. But - sort of like the adjutant of Treskova was. Confidant…

But the great specialist Shlabrendorf established in some miraculous way that in Katyn "it was about Polish prisoners of war from those Polish cavalry regiments who did not oppose Germany, but only against Russia."

What is next? And then let me quote Frau Grote.

“Propaganda Minister Josef Goebbels wanted to use the discovery of thousands of soldiers killed in the back of the head in order to publicize the atrocities of the Soviet Union to split the anti-Hitler coalition. However, Stalin, in turn, accused the Germans of a crime and at the end of the war included a clause on the Katyn massacre in the indictment at the Nuremberg trial. ”

Well, how evil Stalin was among us, we all know. And who actually shot the Poles at Katyn? There are two opinions, and one of them is correct. From the point of view of Frau Grote, he shot the NKVD. And the fact that German weapon used - it is from deceit and cunning. They didn’t use anywhere, they managed to do it domestically, but it was precisely in Katyn that they gathered German.

In general, strenuously poking in the direction of the Soviet Union, these two nonentities, Schlabrensdorf and Gersdorf, begged for life. Telling not about how they couldn’t overthrow Hitler (although they tried very hard), but how they got to know the bodies of the Poles who killed them.

Obviously, the report of these Germans was so miserable that our allies, as if they did not want to, but they kept everything in the archives right up to 1990.

Shame did not want to, obviously.

“After 67 years after the unsuccessful attempt on Hitler, in 2010, a plane crash occurred in Smolensk. The fall of the Polish government plane killed President Lech Kaczynski, as well as numerous representatives of the country. They flew to the event dedicated to the memory of the victims of Katyn. In Poland, they suspect that this could be a terrorist act. ”

Beautiful, is not it? No, really elegant!

And most importantly, no questions!

And nothing to do with it. This whole tale about the spiritual torments of Field Marshal von Kluge's coward (you can write a separate article about participating in the plots of “Smart Hans”), about the crooked hands of Messrs Schlabrensdorf and Gersdorf, about their alleged participation in plots with von Treskov - all for one.

In order to once again spit in us Katyn.

Indeed, Goebbels, who was shouting about the destroyed Poles, is not a cake, as they say. But when the opponents of Hitler, who nearly killed him, speak about the same thing, you can definitely believe them.

All this fuss in the kitchen, it turns out, in order to once again say that the Russians shot the Poles at Katyn.

And all these attempts, not succeeded by the Russian frost, are all husks.

Yes, the German crushed, as it is crushed.

And not the same already. Some kind of liquid and stinks ...

Ctrl Enter
Noticed oshЫbku Highlight text and press. Ctrl + Enter
We are
Results of the week. "Everything! Kina will not be! Electricity is over! ”Reports from the militia of New Russia for 1 September 2014 of the year
Military Reviewin Yandex News
Military Reviewin Google News
29 comments
Information
Dear reader, to leave comments on the publication, you must sign in.