Uncle Sam is building his oil state in Syria

March 17 2018
71
Political scientists and analysts have been talking about the “accomplished” disintegration of Syria for several years now. The decay even formed its own история. Today decay suffered. On 2018 year. Probably, this year the Americans finally "staked out" Syrian oil, democratizing the neighborhood of Deir ez-Zor. 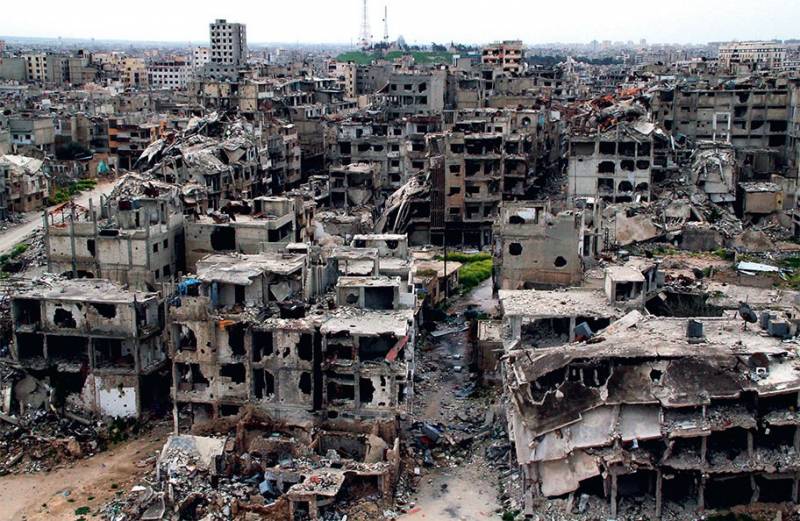 “Syria is in a state close to disintegration,” the expert said at a meeting of the VTsIOM expert club. - The federal region of Northern Syria (Kurds) has already declared its autonomy more than a year ago. It has its own flag, anthem, they are preparing to adopt their constitution, they have their own army, and so on. ” In addition, the Assad government does not control the Sunni areas of Syria. In addition, “IG” (prohibited in the Russian Federation) is “a fairly rigid education in the sense that it cannot be knocked over in a month and a year,” the scientist quotes RIA News". And the Syrian army lacks the strength to take control of the Sunni regions. And therefore, "that Syria, which was before 2011, will never be." New Syria will consist of several independent states, including the Kurdish territory and the Sunni territory.

In 2017, the coming disintegration of Syria was reported in France.

In September, French President Emmanuel Macron proposed the creation of an international contact group comprising permanent members of the UN Security Council and countries with influence in Syria. This idea was then developed by Foreign Minister Jean-Yves Le Drian, who said that the group would develop a roadmap for a settlement in Syria, otherwise the country would disintegrate.

“If we do not take this path [of de-escalation, cease-fire, elections and the formation of a constitution], - сказал he is in October 2017, - there is a risk of disintegration of Syria, its division into three or four regions. ”

At the beginning of 2018, France developed the theme of the disintegration of Syria.

The country can expect disintegration into several parts, and ethnic cleansing and a new wave of terrorism can also await, France’s envoy to the UN, Francois Delauttre, warned in January. “If the question is whether the situation is difficult, then yes, there is no doubt about it,” he quotes. TASS. “I firmly believe that the country is at a crossroads, which is possibly the worst: fragmentation, ethnic cleansing, despair of the Sunni minority, which will lead to a new wave of terrorism, new humanitarian tragedies, waves of migration ... All this is possible.”

These words were voiced after Vladimir Putin announced the prevention of the collapse of Syria.

In November 2017, President Putin announced at a meeting of Russia, Turkey and Iran that the collapse of the SAR was prevented.

"It was possible to prevent the collapse of Syria, there was a real chance to put an end to the long-term civil war," the channel quoted Putin’s words. "Star".

Further, Vladimir Putin announced the completion of large-scale hostilities in Syria: he said that this was achieved thanks to the efforts of Russia, Turkey and Iran.

Also, the Russian president noted that in order to resolve the situation in Syria, help to civilians, demining of the territory and help with the return of refugees are needed.

However, the hypotheses about the disintegration of Syria are voiced to this day.

The Permanent Representative of Saudi Arabia under the League of Arab States declared in March 2018 that Syria could be divided. This will happen because there are too many parties involved in the Syrian conflict.

“I believe that this will ultimately lead to the disintegration of Syria”, - expressed Assumption Saudi diplomat.

There are also known reasons for the imminent collapse of the UAR into pieces: this will happen because the United States "planned spending on supporting militants and opposition authorities in a belligerent country."

The browser has two main points.

The first is a local standoff. Russia and its allies in Syria (Iran and partly Turkey) cannot ensure the territorial integrity of the country. Russia will be opposed by groups of Arabs and Kurds, supervised by the American coalition.

The second is the financing of the American armed forces in Syria, fighting against the official Damascus.

According to the author, the White House "has planned significant costs to support the separatist territories in Syria and the creation there of not only alternative Damascus authorities, but also large armed formations." The Pentagon justifies the costs of supporting the Syrian opposition in the budget for the 2019 fiscal year, including “payments to verified Syrian opposition groups.”

What amounts are we talking about? At first glance, small.

The Pentagon wants to get 80 million dollars - ostensibly to fight the "IG" and ensure internal security. But the United States is not going to transfer the occupied territories, on whose security millions will be spent, to Bashar Assad. Washington is going to invest in the “moderate opposition,” and not in Damascus.

The Pentagon document also proposes by the end of this fiscal year (September 30 ends) to increase the number of "supported" representatives of the "proven Syrian opposition" from 10 thousand to 60-65 thousand fighters.

But the humanitarian and political actions related to the settlement of the situation, the US military budget has not provided.

According to the analyst, 80 million dollars - the amount is relatively large. Syria has a low standard of living, and the American millions are extremely important for the opponents of Assad.

And what about Moscow?

It turns out that she is not able to influence what is happening.

Russia adequately assesses the situation, but it cannot or does not want to radically change the state of affairs. As admitted by Colonel Edward Rodyukov, a corresponding member of the Academy of Military Sciences, Russia will help Assad liberate East Guta and other enclaves in Syria, and then the country will move to a peaceful life. “But this is unlikely to change the overall balance of power,” the expert believes. - Syria is already de facto divided. And the actions of the United States are aimed at making this division final. ” Damascus together with Moscow can get bogged down in a war that as a result will grow into a global one. If Damascus and Moscow jointly continue the struggle with the Arab-Kurdish formations supported by the United States, there will be a great risk that the war will develop into a global war, where "the military machines of the United States and Russia will actually collide."

The split of the SAR and the departure of Assad from the political scene, we note, has long been the ideal of Washington’s Syrian policy. On the "care Assad" was interpreted by Madame Clinton. As for Mr. Trump, you cannot call him an ardent admirer of the Syrian president. And if it were not for intervention in the war of Russia, it is unlikely that Assad would rule the country now.

The disintegration of Syria is an undoubted project of the USA. The American military machine methodically implements it. Already, the Americans, who were not without reason called oil democratizers, consider almost "their" a certain part of the territory of Syria. We are talking about the neighborhood of Deir ez-Zor to the west and east, those that are rich in oil.

Previously, the militants of “IG” hosted and traded in minerals there, but now other times and other owners have arrived. If the United States consolidates on a lacquered piece of territory, they will not allow anyone to the oil there.

Hillary Clinton talked a lot about energy oil independence of the USA, and she knew a lot about these projects. And here you are: energy strategy - in action.

This strategy of Americans is well understood in Russia.

In a February interview with Euronews, Russian Foreign Minister Sergei Lavrov сказалthat the United States has been working in Syria for two or three years. Their goal is to establish control over part of the country.

The Russian Foreign Minister believes that the US strategy in Syria comes down to the following: “to live forever in Syria with its armed forces”. Why? According to Lavrov, Americans are leading the matter to “isolating a huge chunk of Syrian territory from the rest of the country, in violation of the sovereignty and territorial integrity of the Syrian Arab Republic, create some quasi-local authorities there, trying in every possible way to create some kind of autonomous entity, relying , again, to the Kurds. "

It is not difficult to guess that the “piece” is precisely the neighborhood of Deir ez-Zor with their oil. Previously, this city was the center of the oil industry in Syria.

The city itself in the autumn of 2017, the Syrian government forces, with the support of the Russian Aerospace Force of the Russian Federation, liberated themselves from the "IG" formations.

But the United States is already hard to show teeth in those places. At the end of February, 2018, the American coalition bombed out several villages in the vicinity of Deir ez-Zor.

Earlier in February, the formations fighting on the side of Assad fell under the air strike of the coalition under Deir ez-Zor. Other Western media wrotethat there "could kill dozens of Russian citizens."

These blows, of course, are just the beginning.

The United States will replace the former detachments of Islamist terrorists in its territories with its own military forces and the forces of the sponsored "insurgents". A short period of democratization of the population will follow, after which a rapid pumping of oil will begin in the name of the prosperity of the United States and the freedom of the new Syrian democracy that respects the rights of the American person.

As for the Kurds, they are in the predatory game of splitting Syria - cannon fodder or, at best, extras. Maybe they will have a chance to create their own state, but the best pieces will still be taken by the United States. Transnational capital is not interested in the well-being of local peoples.

Of course, the appropriation of oil fields at the same time will be the beginning of the collapse of Syria. No one will enter the war with the United States because of the “piece of territory”.

Observed and commented on Oleg Chuvakin
- especially for topwar.ru
Ctrl Enter
Noticed oshЫbku Highlight text and press. Ctrl + Enter
We are
Syrian Kurdistan: Will there be peace and freedom?Syria: Americans scare themselves, and Asma Asad buys chairs
Military Reviewin Yandex News
Military Reviewin Google News
71 comment
Information
Dear reader, to leave comments on the publication, you must sign in.