"Great Romania" want to build at the expense of Ukraine

March 16 2018
44
In Romania, they do not lose hope to return those lands that belonged to the country before the Second World War. We are talking about the territories that became part of the Soviet Union in 1940 in connection with the Molotov-Ribbentrop Pact. Once again, the need for a parliamentary procedure for the abolition of the results of the pact was declared by the former Romanian President Traian Basescu. He headed Romania for ten years, from 2004 to 2014, and became widely known as a Pan-Romanian, a supporter of the creation of “Greater Romania” by combining “originally Romanian” lands, to which he includes not only modern Romania, but Moldova as well the territory of Ukraine.


The idea of ​​"Great Romania" was widely spread in the country in the first half of the twentieth century, which was due to the need to compensate for the offended sense of national pride. Romanian nationalists have always felt their country was wounded, forced to play a third-rate role in European politics. “Iron Legionnaires” Corneliu Codreanu and Marshal Ion Antonescu dreamed of “Great Romania”. At the end of World War I, Romania, acting in alliance with the Entente, acquired Transylvania, formerly part of Austria-Hungary, and the disintegration of the Russian Empire made it possible for Bessarabia to be annexed to Romania in the same 1918, formerly the former Bessarabian province of Russia. The period from 1918 to 1940 was the time when Romania had the maximum territory. The eastern border of Romania with the Soviet Union passed along the Dniester, that is, Romania included Bessarabia (today it is the territory of Moldova and south-western regions of Ukraine) and Northern Bukovina (Chernivtsi region of Ukraine). 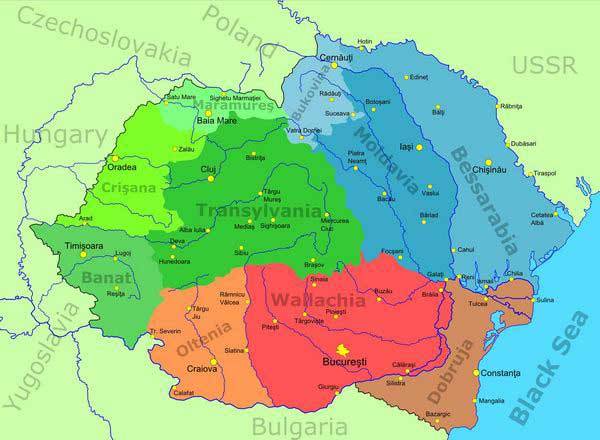 August 30 1940 by decision of the second Vienna Arbitration, which was initiated by Germany and Italy, Northern Transylvania was transferred from Romania to Hungary, and September 7 by 1940, Romania ceded the South Dobrudja region to Bulgaria. Thus, by the year 1940 Romania lost significant territories, which could not but affect the national identity of the Romanians. Romania’s participation in World War II was largely motivated by the desire of the elite to regain control of the lost territories. And in the east, the Romanian army hoped to conquer all the territories up to the Dniester.

But the defeat of Hitler and his allies put an end to the invasion plans of Romania. The country had to come to terms with the existence of already defined boundaries, although the pan-Romanian sentiments in Bucharest never disappeared, even during the socialist period stories country. Nicolae Ceausescu, a communist orthodox, managed to combine his communist views with Romanian nationalism and, although he could not openly present to the Soviet Union territorial claims on Bessarabia and Northern Bukovina, he did not hide his attitude to their entry into the USSR.

The collapse of the Soviet Union inevitably led to a revival of nationalist sentiments in the former Soviet republics and in neighboring states that had certain territorial claims against them. An impressive pro-Romanian lobby was formed in Moldova, where discussions about the possibility of uniting with neighboring Romania, which is linguistically and culturally related to Romania into a single state, have not yet ceased. Although unionist sentiments are not very popular among the Romanian population, they have some support from some of the political elite and business of Moldova. 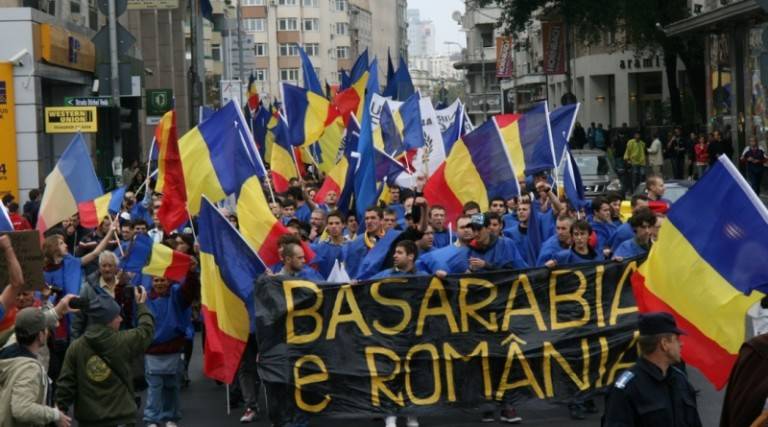 In principle, there is nothing surprising or bad about Moldovan unionism, since Moldovans and Romanians are close nations with a common history, very close languages, and similar culture. But the Romanian nationalist forces claim not only Moldova to be included in Romania (without Transdniestria or with Transnistria - it depends on the radicality of specific political forces and leaders), but also on the accession of other territories that had been taken away from Romania in favor of the Soviet Union. We are talking about Northern Bukovina, which now forms the Chernivtsi region of Ukraine, and about Southern Bessarabia, which is part of the Odessa region of Ukraine. But, unlike Moldova, in Ukraine such a scenario as the return of the two regions of Romania, of course, does not provide for anyone.

Before the coup d'état that took place in Ukraine in 2014, Romania expressed its thoughts about the return of Southern Bessarabia and Northern Bukovina very carefully, but Maidan, the war in Donbas and the subsequent large-scale political weakening of Ukraine did their job - now in Bucharest they declare the need to revise the borders of the 1940 very active.

Note that Traian Basescu is not a marginal street politician, but a former head of state who headed Romania for ten years and has a large political weight and, accordingly, support among the Romanian elite and among the population. His pan-Romanian positions reflect the point of view of a certain part of the Romanians, who rely on historical revenge and revision of borders. It is worth noting here that in Romania in general they are very sensitive to the issues of national prestige, territorial integrity, the unification of the Romanian nation. To create a united and “great” Romania is an old dream of the Romanian nationalists, which they are not going to give up in the 21st century. Moreover, now a very favorable situation has developed for the implementation of these plans. For this, it is necessary to pursue a pro-Romanian and unionist policy in Moldova, and simply put pressure on Ukraine, using the difficult economic and political situation that Kiev found itself in.

On the other hand, the Ukrainian authorities themselves are digging a hole under their feet. After all, the policy of Ukrainization, which was originally directed against the Russian and Russian-speaking population of Ukraine, also beats up numerous national minorities - Hungarians, Romanians, Bulgarians, Gagauz.

In 2017, the President of Ukraine Petro Poroshenko, within the framework of the program of Ukrainization, signed a decree on the termination of teaching in schools in the languages ​​of national minorities - from 2018, all classes should be transferred to Ukrainian from 5 and older, and from 2020, the school translation program The Ukrainian language should complete completely. Meanwhile, in the Chernivtsi and Transcarpathian regions there are schools that teach in Romanian. In Bucharest, they believe that Kiev should not restrict the rights of Romanian children to receive education in their native language. Thus, Kiev itself creates the ground for the deterioration of relations with its closest neighbors - Poland, Romania, Hungary, Bulgaria. 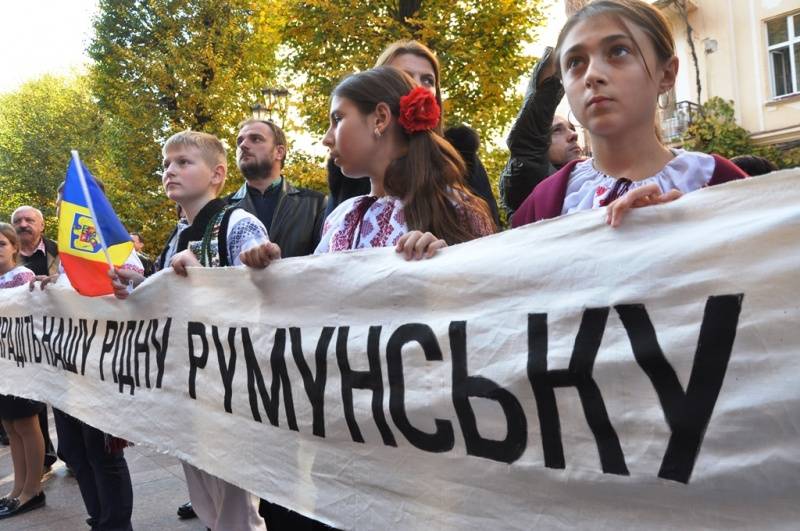 Romania, like Hungary, has an iron argument in its territorial claims against Ukraine - the protection of the Romanian population from linguistic, cultural, political discrimination. So far, the most actively criticized Kiev are engaged in Budapest, but Bucharest is on the way. Currently, at least 150 thousands of ethnic Romanians live in Ukraine. The vast majority of Ukrainian Romanians live compactly in rural areas in the southwestern part of Chernivtsi region and southeastern part of Transcarpathia. After Northern Bukovina entered the Soviet Union in 1940 and was incorporated into the Ukrainian SSR, the Romanian population retained a certain cultural autonomy here - Romanian was studied in primary and secondary schools, the department of Romanian philology at Chernivtsi University operated, newspapers were published in Romanian language.

In addition to Romanians, there are Moldovans living in Ukraine, whose numbers are even higher - no less than 258 619 people. The Moldovan population lives in rural areas in Odessa, Chernivtsi, Nikolaev and Kirovograd regions. Since the Romanian nationalists do not share the Romanian and Moldovan nations, then, from the point of view of Bucharest, about half a million Romanians and Moldovans live in Ukraine. In addition, the number of “Ukrainianized” Moldovans is considerable, which in Soviet and post-Soviet times, for various reasons, preferred to attribute themselves to Ukrainians, but in the event of a change in the political climate, they may well recall their roots and return to Moldovan or Romanian identity.

Back in 1994, Romania, taking advantage of the collapse of the Soviet Union, passed a law giving the right to Romanian citizenship to all ethnic Romanians and Moldovans. Then another law was passed - “On Repatriation,” according to which residents and descendants of residents of Bessarabia and Northern Bukovina, who were included in the Soviet Union in 1940, received the right to Romanian citizenship.

Thus, Bucharest hoped to ensure the creeping "Romanization" of the territories of Moldova and Ukraine, which are interesting for him. After all, Romania is a member of the European Union and for a resident of Ukraine, who has proved his Romanian roots and has gained Romanian citizenship, all prospects connected with the citizenship of the European Union are opened. Naturally, ethnic Romanians, especially those living in the Chernivtsi region, rushed to acquire Romanian passports. Currently, at least 100 of thousands of Romanians live in Chernivtsi region - and these are not visitors, but locals who have passed the procedure of obtaining a Romanian passport under the laws "On Citizenship" and "On Repatriation".

In addition to granting citizenship, Romania is taking active steps to "Romanize" the information and cultural space in the Chernivtsi region. Broadcasting of Romanian radio and television, publishing newspapers in Romanian, numerous Romanian language courses, festivals of Romanian culture - all this is not just cultural charity, but components of the targeted policy of the Romanian state. The plans of Bucharest are to ensure the national Romanian revival in Northern Bukovina, which will be one of the most important preparatory stages for the rejection of this region from Ukraine and its inclusion into Romania. The Kiev authorities, pursuing a policy of Ukrainization, did not take this fact into account, which soon caused a clash of interests of Ukraine with Hungary, Romania, Bulgaria and Poland - precisely on the problem of Ukrainization and the position of national minorities in the country.

Southern Bessarabia is a separate topic. Unlike Northern Bukovina, the purely Romanian population here is small, dominated by Bulgarians, Gagauz, Moldovans and Russians. Moreover, a significant part of the Bessarabian Moldovans is Russified and does not correlate with the Romanian nation. This is confirmed by a much smaller number of Romanian citizens in the Odessa region of Ukraine - there are just over a thousand 1 people living there, which is 100 times less than in the Chernivtsi region.

Although all the indigenous inhabitants of Southern Bessarabia, according to the law “On Repatriation”, have the right to obtain Romanian citizenship, the overwhelming majority do not seek to exercise this right. Rather, pro-Russian sentiments prevail in the Odessa region, which makes possible the annexation of the territory of Southern Bessarabia to Romania very problematic and painful. If the Romanians of Bukovina would most likely support this accession, then in the Odessa region it would be met with indignation.

However, Russia, despite its uneasy relations with Ukraine, is hardly worth rejoicing at the growing territorial claims of Romania. To begin with, Romania has a very significant role in the new coordinate system being built by the United States in Eastern Europe. Together with Poland, Romania, as a large and ambitious state, should play the role of striking force in a possible confrontation with Russia. Therefore, the United States and are very condescending to the Romanian territorial claims against Ukraine. Romania for the United States is a more promising and reliable satellite than Ukraine, so if necessary, Washington will easily give the go-ahead for rejection in favor of Romania and Northern Bukovina, and Southern Bessarabia.