Fiends on the Black Sea. Little-known crimes of the Nazis in the area of ​​Novorossiysk. Part of 7

March 19 2018
9
In the previous parts, the author tried to systematically systematize hell, however, I could not abstract from emotions, as lawyers do. Billions of times more difficult work was done by Major General Ion Nikitchenko and Colonel Alexander Volchkov, who represented the accusation from the USSR at the Nuremberg Tribunal. And I’m not talking about the volume of evidence and testimony (simply incomparable), but that justice most often does not accept emotions - only dead wood of built-up facts that are necessary for a scoundrel who you want to just strangle with a guitar string in your heart is just punished.


Very often, for the need to build this very dead of facts, to systematize them, in order to try to present to the public the edge of hell that requires condemnation, you miss its content. That is, the daily state of the underworld, which disfigured people by hiding behind seemingly particular instances of military reality. Sometimes these are cases of this kind that are not subject to serious punishment. Well, who, tell me, after a big bloodbath will punish the stolen chicken, even though it was the last? Or, for example, for beating a woman to an unconscious state? Even their sometimes throw backhand - easily got off. Who will be responsible for the tested horror of being in the "new European order" when you go out and see the gallows with decaying corpses every day? 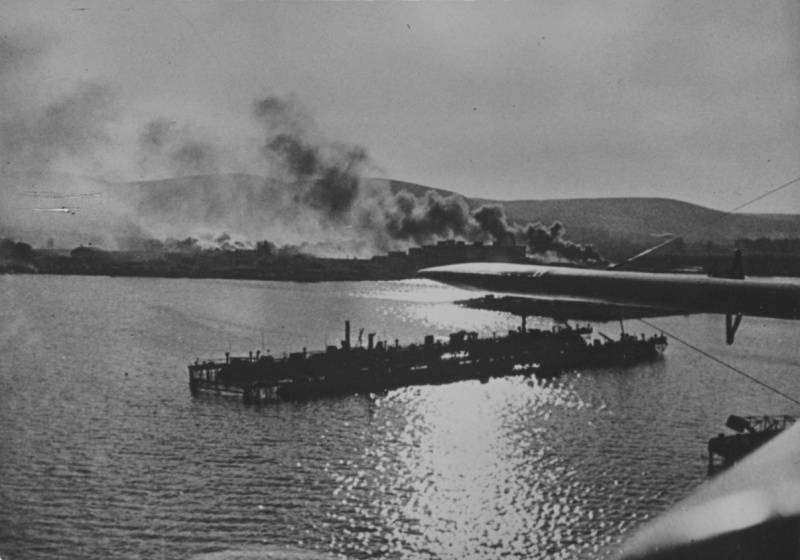 It’s not worth talking about single murders that will be written off to the reality of war. Or executions of partisans (and sometimes allegedly partisans, since there is no logic of survival in hell) and the Red Army men and Red Navy will be very concerned about someone other than those who have seen it? It is doubtful. After all, time passes. And for us, who idly sticks around shopping malls with some coffee in a cup and a fan of discount cards in their pockets, is it so easy to understand that reality (if at all possible)? But let's try to imagine the everyday life of the occupied city that does not fit into the systematics of crimes.

Separately for those who ask a logical question why the population did not run - I will explain. First, in the city there were mostly women, elderly men, very old and old women, as well as children. To overcome the rocky mountainous rugged terrain to these categories of citizens is at least very difficult.

Secondly, despite the burning desire of the Nazis to clear the city of the population, this does not mean that they were ready to close their eyes to the departure of people from the city. The word “cleansing” was understood by the Nazis as either physical extermination or forced eviction with hijacking as slaves.

Thirdly, any citizen, be it a man, a woman, an old man or a child, caught in a mountain wooded suburban area, was considered as partisan. He was either shot on the spot without question, what else, no matter how cynical it might sound, was not the worst outcome, or he was tortured and his identity was found out. If it was possible to identify the caught Novorossiysk, the execution or the gallows was waiting not only for him, but for all his relatives without exception. Such cases in the archival documents reflected a lot.

One of the obligatory attributes of the Novorossiysk landscape during the Nazi occupation was the gallows. The unfortunate hanged occupiers, on pain of execution, were barred from shooting. Day after day, women, children and old people had to pass by them, looking at what they might expect in the near future, because the Germans and their accomplices did not make any gender or age differences. 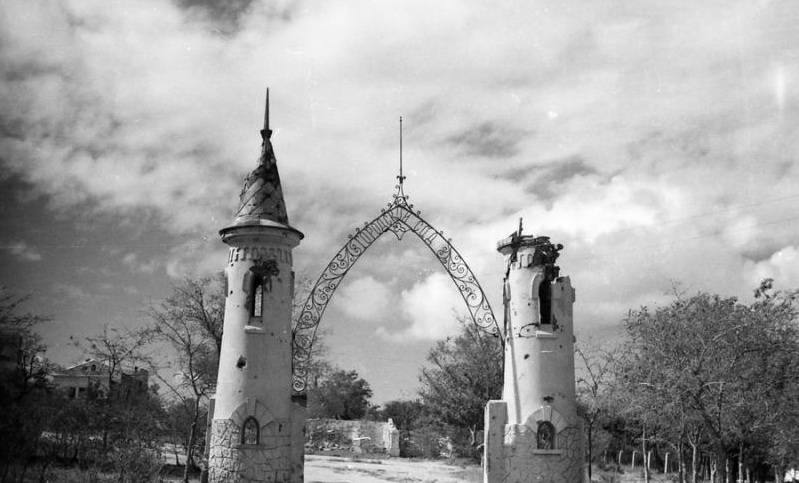 Destroyed decorative turrets, once decorated the entrance to the park, during the war the Germans "decorated" it differently

Residents of Novorossiysk Euphrosyne Feodorovna Babicheva (ul. Gubernskogo, 9) and Anna Sergeyevna Tkachenko (street of the Paris Commune, 1) testified that on various streets of the city were hung the gallows who did not have time to go empty. Especially the whole gallery of the hanged men, which the Nazis staged in the Lenin's garden, crashed into the memory of women.

The Germans “decorated” not only the city itself, but also its suburbs with gallows. Tatiana V. Kalinina, a school teacher at the state farm Myskhako, testifies:

“... the Germans gathered the population of the state farm into the garden of the village, and right there in front of the assembled people built the gallows, then surrounded the population with machine gunners. A German officer, whose name is unknown to me, went out to the circle of those who had gathered and began to read lists of driven people, seeking to indicate which of those named was a Communist. Not having achieved anything, the officer finished the interrogation. Immediately, three Romanian soldiers, pushing with their butts, drove two Russian sailors. Both were hanged. The corpses for 10 days were forbidden to shoot on pain of execution. A few days before the landing, the Germans often brought residents shot and hung them. ” 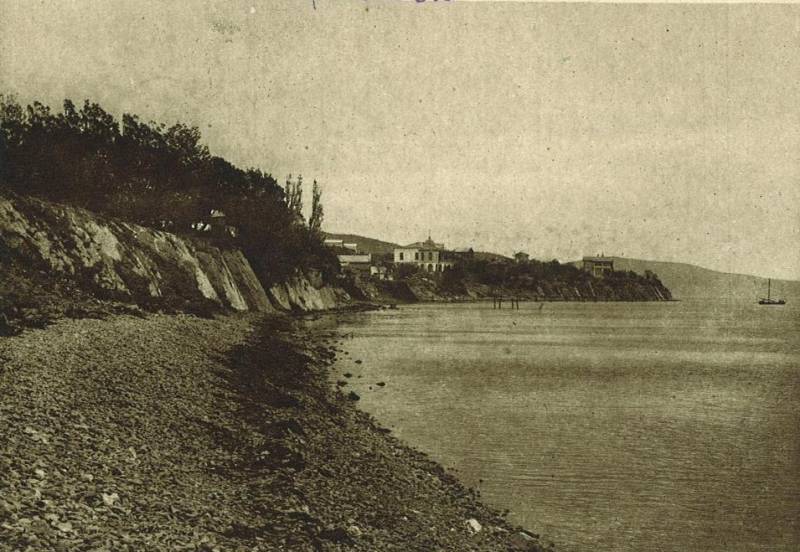 The absence of any morality, worse, even the absence of a purpose for which they use inhuman cruelty and violence, no matter how terrible this goal may be, can drive you crazy. Life turns not just into waiting for death, but into torment in anticipation of a no less painful death. Here they are - the routine of the German occupation.

Citizen Tkachenko testifies (initials are illegible, perhaps the same name of the witness already familiar to the reader or herself):

“... In July, a German and a Cossack came to my apartment, and they started asking me about the partisans. I didn't tell them anything. They cut my lips in four places, tied my hands and threw me away, because of the pain I lost consciousness. And when I woke up, they were no longer around me ... "

“I was for an unknown reason arrested by the police and I was held only one day. 1 September 1943 brought me to the basement, and I realized that I was being shot. The policemen were taken to execution: Krivenko, Yemtsev and Maureen. As soon as I entered the basement, Krivenko fired a shot at me, a bullet hit me in the ear, I immediately fell. Yemtsev told Krivenko that I was still alive, then Krivenko shot again and hit me in the neck. Consciousness, I have not lost and decided to pretend to be dead. I was searched and a meter and a half ottyanul away. They decided that I was dead. They brought one woman and a man, whose names I do not know, and immediately shot them. They were piled on me and the three of us were covered with tin sheets. From the basement, since he was not guarded, I fled at night. ”

“In February 1943 of the year along the Griboyedov street, the Germans shot ten Novorossiysk residents. The provocative shot of a German soldier at a chicken wandering along the street served as a pretext for execution. Among those shot were Ziletsky Stepan Antonovich 60 years, Gordeyev about 70 years, Solovyov - father and his 15-year-old son ... "

Praskovya Danilovna Gorodetskaya 53 years witnessed, in my opinion, indicative evidence of the complete contempt of the soldiers of the "new Europe" of any truly human feelings. Praskovya’s houses were led by several people who had been hijacked into the Reich. One of the women from grief constantly crying and grabbing stones from the ground to kiss them goodbye to their beloved city and homeland. Having noticed this so human manifestation of the feeling of love, the officer shot her on the spot. 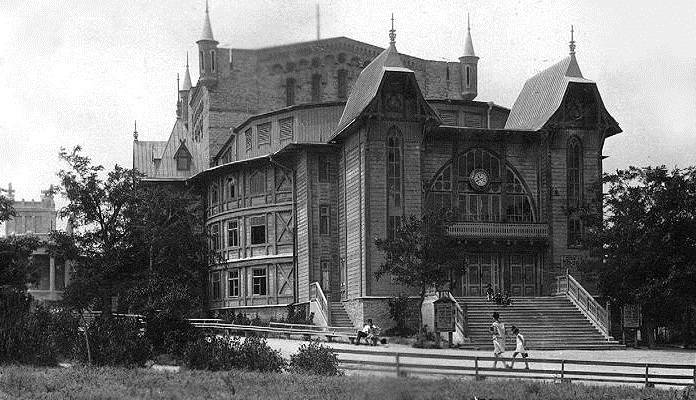 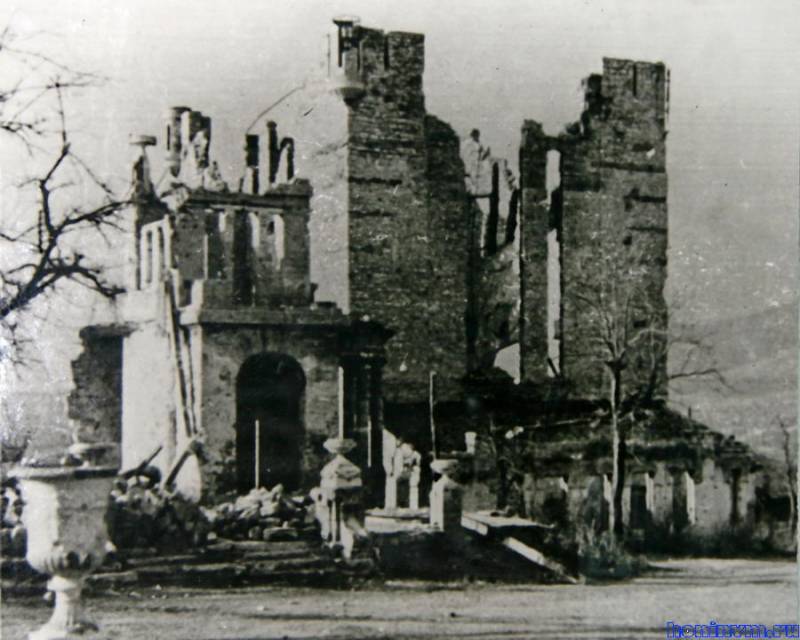 Interestingly, these facts were familiar to our glamorous paratrooper Bondarchuk (the youngest, naturally), when he was filming his hack, hiding behind the glorious name of "Stalingrad"? Or is the episode of the Hitler’s tender love for a Soviet citizen with the face of a modern top model in the initial stage of anorexia just a “creative” vision of the director? Or maybe it’s worth wiping out the real facts so that any man in the street won't cry out that we are kindling something with our own memory or offering to bomb someone? Questions are rhetorical, but they need to be asked. And remember the past is necessary.

The final touch to the portrait of the everyday "life" of the occupied Novorossiysk will be история one more shot. The shooting, which directly says that in the hell of Nazism, the hope of survival is stupid, because in this place only one hope can live - to preserve their own dignity. So, Feona Ivanovna Gavozda (Moskovskaya St., 9) became an eyewitness, as in one of the occupational days during the next round-up the Germans broke into the apartment next to her. There lived the intimidated, and therefore absolutely loyal to the new order, Nikolay Oleinik (non-partisan, which is especially noted in the archival data), an old weak person in everything pleasing the invaders. Despite all these facts, indisputably known to the German commandant's office, the Nazis first beat a screaming old man half to death, and later shot him dead. Draw your own conclusions.

Ctrl Enter
Noticed oshЫbku Highlight text and press. Ctrl + Enter
We are
Yegor Volchkov becomes the new commander of the Somalia battalionDay of the legal service specialist in the Armed Forces
Military Reviewin Yandex News
Military Reviewin Google News
9 comments
Information
Dear reader, to leave comments on the publication, you must sign in.