March 14 2018
59
Rex Tillerson paid for reckless remarks about Russia. Secretary of State Tillerson found Russia guilty of the poisoning of Sergei Skripal in the UK, and President Trump did not find it. As a result, Tillerson deals with Mr. Pompeo, and experts write that it is time to move from insults and threats to Washington to cooperate with the Russians. 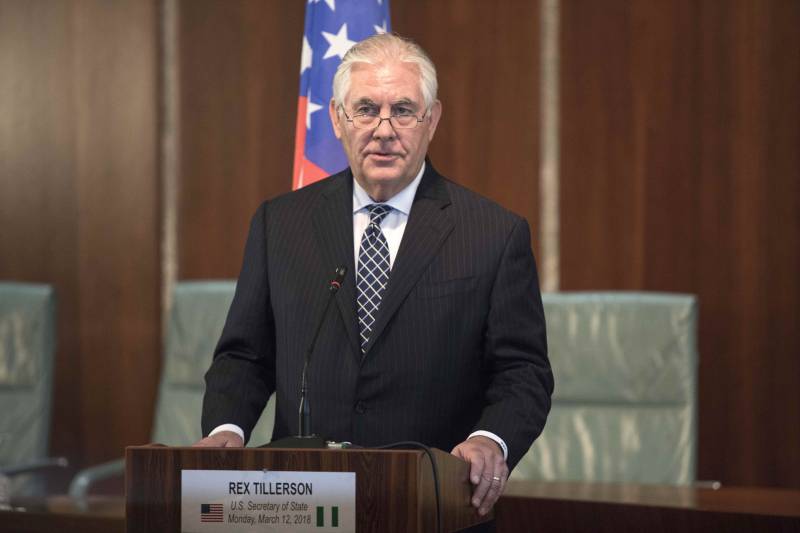 A few hours ago, US President D. Trump announced his decision: Rex Tillerson will be dismissed as Secretary of State. To hide the reason for the decision, Trump did not: he explicitly announced that he (Trump) had "disagreements" with Mr. Tillerson on his way of thinking.

Observers and analysts in the United States immediately clung to the connection between the statement of Tillerson about S. Skrypall's poisoning in Salisbury (United Kingdom), which Moscow allegedly stands for, and the current decision of President Trump.

Recall, on the eve of the State Department in the face of its chief officially agreed with the British government and the parliament, opposed to Russia. The Department of State considered that the Kremlin was probably responsible for the poisoning of Sergei Skripal and his daughter. About "full confidence" in this, but without any evidence, the head of the State Department Rex Tillerson said through the website of his department: “The United States was in contact with our allies in the United Kingdom ... We have full confidence in the UK investigation and its assessment that Russia is probably responsible for the nerve attack that occurred in Salisbury last week. Such attacks - assassination attempts on a private citizen on the land of a sovereign nation - have never been justified, and we are outraged that Russia seems to be doing it again ... ”

Despite the “likely” and “similar”, the statement turned out to be very tough and, in fact, unambiguous.

The candidate for the post of state secretary has already been designated: this is Mike Pompeo, who previously headed the CIA. The candidate must still approve the Senate.

Tillerson’s resignation is scheduled for March 31, which Tillerson himself kindly told the press and State Department staff.

Jonathan Chate at "New York Magazine" in connection with Tillerson’s imminent resignation, he ironically compares the fact that the Secretary of State’s statement was harsh with Trump’s decision: “Trump denies Russia’s guilt in the murder [sic]: Murder. - O. Ch.]. Tillerson recognizes her. And he is fired. Hm! ”

The reason for the resignation of the Secretary of State is that Tillerson "clearly called Russia the culprit for the murder of Sergei Skripal in the United Kingdom, and Donald Trump did not do that."

In addition, the White House press secretary Sarah Sanders on Tuesday condemned the poisoning as a "reckless" and "outrageous" act, but repeatedly refused to approve the withdrawal of the British government that Russia was behind this. She said that Washington is ready to support Britain, to help her, but did not recognize the culprit of the incident with the poisoning of Moscow.

But Rex Tillerson unambiguously made it clear that the attempt was “obviously” made by the Russians. And the next day, in the morning, Trump had already sent Tillerson to resign "without any prior notification," writes the journalist. After that, Trump "briefly appeared on the lawn of the White House," where he was caught up with the press. When asked about the Violin poisoning, he replied: "We will condemn Russia or that ... whoever it is."

Whoever it is? No, this is almost a coincidence: the dismissal of Secretary of State Chate finds it associated with a sharp statement of that. At the same time, Chate is surprised: what kind of “innocent” explanation can the Trump administration give to Skripl if he was “the closest ally of [the US] in whose territory the murder occurred, clearly indicated who committed it?” 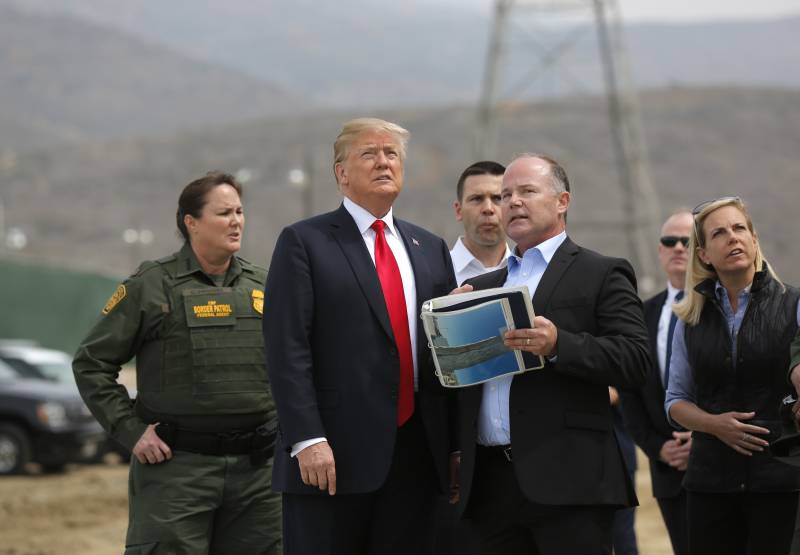 No, there are no Russians there!

Some experts spoke very timely about the necessary changes. From insults to Moscow, it’s time for Washington to move on to cooperation.

P. Lukyanov is an American entrepreneur, an investor with more than 20 years of experience in Russian-American enterprises, a publicist, author of materials about Russia and the USSR.

It is time for Americans to recognize: the time has come for “pragmatic cooperation with Russia,” Lukyanoff believes.

Despite the long-term collapse of communism in Russia and the independence of Russia, many in Washington still cannot imagine “productive relations” with the Russians. But before 1917, Russia was the only major power in the world with which the United States "had neither wars nor serious diplomatic disputes," reminds the expert. The Russians even supported and defended America during difficult periods: the American Revolution and the Civil War. And President Jefferson once said that Russia is the “force on the Earth” most friendly to Americans.

And today one people blames the other people for interfering. But shouldn't the United States look for ways to have good relations with Russia, shouldn't the Americans do it “for the sake of America’s national interests”? But the opposite is being done: the endless repetition of sanctions has forced Russia to move closer not with the United States, but with China. Chances of confrontation are growing - political, economic, nuclear and others.

But the Russians have already done to the Americans, and more than once, proposals for partnerships - in business, and in the fight against terrorism, and in European security.

Now the United States is compelled to restore mutual respect and try to interest Moscow "with its proposals." Why? Because история and pragmatism show: constructive cooperation with Russia is in the interests of America!

Lukyanoff proposes that Washington "clear itself" of "prejudice towards Moscow."

The time has come, the expert believes, to shift the emphasis of US foreign policy - to move away from the concept of the Cold War, from the very old-fashioned notions of a long time ago and “rethink business relations with Russia.”

Lukyanoff recalls that Russia has repeatedly tried to get close to the United States. In the 2000 year, in his first year in office, President Putin even offered to join Russia to NATO. After the September 11 tragedy, Putin became the first world leader to offer condolences to President Bush. He even contacted the leaders of the Central Asian countries to allow American troops to use the military bases of the former Soviet Union. Putin provided intelligence by supporting the American war in Afghanistan. Such actions would be unimaginable during the Cold War.

In 2007, Putin proposed a compromise on joint missile defense to Washington. After being elected in 2008, President Medvedev suggested working together a few key initiatives. In turn, President Obama came up with the idea of ​​a "reset". Be that as it may, but the proposals of Russia were not perceived by America sincerely.

According to the expert, Washington should recognize the gestures of the goodwill of Moscow. After all, these political gestures were "a sure sign of Russia's sincere desire to cooperate with the United States," while avoiding the "Soviet ideological paradigms." Russia's efforts were to lead to a strategic partnership with the United States. But Washington “failed to seize the opportunity,” the author notes bitterly. Instead, he “continued to treat Russia like the USSR” (“America’s geopolitical enemy number one”). , The inability to distinguish Russia from the Soviet Union poisons the relations of the two states to this day, the author sums up. The US media draws Russia "the enemy and the aggressor."

The sanctions that the Americans prescribed for the Russians are “doomed to failure,” the expert further notes. Pragmatic collaboration would probably be “more productive,” he ironically. America should not live the habits of the cold war. She must restore confidence through updating the staff of diplomats and politicians. These people should strive to prioritize trade, not conflict. These people should know Russian. This approach will work. This is clear, because many Americans who work in modern Russia are “pleasantly surprised”, revealing discrepancies in comparison with stereotypes.

The United States should think about this and recognize the benefits from the great potential of constructive relations with Russia - the very country that has been one of the strongest American allies for almost a hundred and fifty years.

The resignation of Mr. Tillerson, who by the very “habit” that Lukyanoff sarcastically spoke of, accused Moscow of Slippery poisoning, shows that the degree of Russophobia in Washington can still be reduced. It is not excluded that congress hawks will now once again put a broken record with the single “Trump - an agent of the Kremlin”, but Trump is unlikely to cancel his decision. And the future Secretary of State, M. Pompeo, if only he is approved, is unlikely to cut himself off his shoulders in his statements, scattering unsubstantiated accusations for Russia.

In addition, as the same Mr. Lukyanoff rightly says, Americans, first of all politicians, should learn: Russia is not the Soviet Union at all. Economically, it is much weaker, and technologically it is much lower than the United States. Developed socialism in the country and does not smell - the Russians have long been accustomed to the twists of capitalism and the market. There are no reasons for the confrontation between the two political systems. The thinking in the spirit of the Cold War, characteristic, for example, for ancient Senator McCain and his associates, became outdated at the end of the 1980s. Politics is a dirty business, but it seems to cleanse itself when politicians find compromises and take the planet away from total nuclear war. Or when terrorism is victorious.

Hardly, of course, Mr. Trump, who takes the militarist Reagan as a model, will cause the two states to come together. It remains to hope that he will not spoil the relationship even more, and his successor will be more to the world than to militarization and the arms race.

Ctrl Enter
Noticed oshЫbku Highlight text and press. Ctrl + Enter
We are
Bitter thoughts of the West. Will Russians poison Donald Trump and Theresa May?Situational analysis of the death of the MH17 flight (Malaysian Boeing 777), made on the basis of engineering analysis from 15.08.2014
Military Reviewin Yandex News
Military Reviewin Google News
59 comments
Information
Dear reader, to leave comments on the publication, you must sign in.