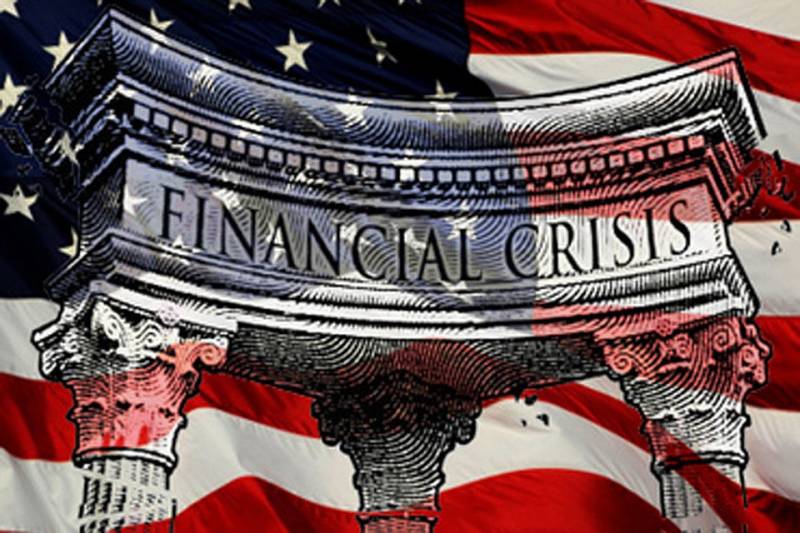 What we call chaos is patterns that we cannot recognize.

Here is the opinion of Chinese General Qiao Liang on the striking patterns of geopolitics of the late XX - early XXI centuries. and associated economic shocks for the whole world. No unnecessary conspiracy and complex concepts. All that the Chinese general says is well-known facts, from which the simplest (and such obvious!) Conclusions follow.

The cornerstone of the newest stories became “Nixon's Shock” (1971) - the one-sided refusal of the United States to peg to the gold of the dollar. From that moment on, America became a financial superpower and began to plunder the world through the dollar.

You say you heard this story a million times. But who noticed how the “robbery”? In silence, behind closed doors of banks? Why no one hears, and begins to notice the consequences, only when the money once again flowed to the United States?

The Americans are robbing under the deafening roar of wars and economic crises.

A full cycle takes about 12 years. The first decade is accompanied by a weakening of the dollar, when the countries of the “first world” are actively investing in developing economies. Then the US currency sharply increases. The countries that experienced rapid development are plunged into an economic crisis, which is accompanied “in time” by the outbreak of war. Money and investors, in fear, flee from the depressed region to the US, where the Americans are buying up all the assets at the expense of a stronger dollar.

The cycle is complete, you can start again. 10 is ahead of years of a weak dollar.

For the first time this method was tested in Latin America. In the 1970s, there was a significant upturn in the economies of countries in this region. For decades, political stability, coupled with the active involvement of Western capital, has made it possible to increase the pace of modern production in mechanical engineering, energy, extractive industries and agriculture.

The United States carefully looked after the “bed”, feeding the soil with cash loans, providing technology and, of course, delivered weapons - in the future it will definitely come in handy. Everywhere concern for stability was shown. The condor operation, a campaign to suppress the opposition through the joint efforts of the six most epic dictatorial regimes in South America (Argentina, Brazil, Paraguay, Uruguay, Chile and Bolivia) with the direct support of the CIA, was a touching example of cooperation.

As a result of all efforts for the 1980 year, the total gross domestic product of the countries of Latin America was three times higher than the level of the 1960 year.

The Americans decided it was time to harvest.

In 1981, an economic crisis broke out that shook the entire region. Against the background of a shaky economy, Argentine President L. Galtieri did not find anything better than to get involved in a war.

The Falklands conflict was an outstanding staging of R. Reagan: the former actor played one of his main roles. He gave a warm welcome to Galtieri during the visit of the Argentine leader to Washington. He called him his friend and "stronghold of the fight against communism." What was the conversation behind closed doors and what guarantees did Reagan give to the Argentine president? We do not know for certain.

But we know that the war began next spring. In the best spirit of the Chinese strategists, Reagan immediately supported the UN anti-argentine resolution (No. XXUMX) and sided with the British, giving them a military base on Fr. Ascension, ship fuel and space intelligence data. Along the way, in order to further destabilize the situation in the world and distract the attention of the USSR, he forced Israel to launch a military invasion of Lebanon.

The Falklands War was lost. Galtieri in June 1982 flew out of the presidential palace. The military junta and the economy of Latin America began to collapse like card houses. Profit flowed into the pocket of the United States, but the vector of American politics has already been sent to another strontium.

Thailand, Indonesia, Malaysia, the Philippines, as well as four “Asian tigers”: Taiwan, South Korea, Hong Kong and Singapore, which experienced an unprecedented economic boom at the turn of 80-90.

About the phenomenon of the emergence of "Asian tigers" legends. How did these tiny countries, devoid of any resources of the country, which have nothing but earthquakes and troubled neighbors, suddenly become leaders of the world economy? Analysts and experts are accustomed to explain the miraculous rise of “tigers” by the hard work of the Asians themselves and their business acumen. However, this naive theory has its weak points.

According to economic studies, the average annual growth rate of labor productivity in South Korea for the period from 1966 to 1990 was only 1,7%. In other countries of East and Southeast Asia, the productivity growth factor also played a minor role. The main factor behind the growth of tiger economies was the attraction of huge investments from abroad.

The beginning of the economic recovery coincided strangely with the weakening of the dollar and the “dollar rain” that hit the region in 1986. “Tigers” were specially fattened for slaughter.

In 1997, a powerful economic crisis swept through Southeast Asia like a hurricane tearing down the old roofs of pagodas. Unlike other global processes, growing out of unremarkable events, the economic crisis of 1987-98. had his instigator. It all started when Soros and his Quantum fund attacked the weakest currency, the Thai baht, which caused a chain reaction with the collapse of the region’s economies.

The military component was not required; economies weakened by financial turmoil, as they wanted in Washington. As a last resort, a special tool has always been prepared for the countries of East Asia - the DPRK.

It took another 10 years

In China's “fat zero” annual GDP grew six times, reaching a value of almost 7 trillion. against the background of the weakening of the American currency in 2002, the PRC experienced an unprecedented influx of investment. The average annual GDP growth topics at that time exceeded 10%. The Chinese economy ranked second in the world, becoming the next target for the attack of raiders from Capitol Hill.

The global economic crisis has halted the growth rate of China’s economy. The strengthening of the dollar was traditionally accompanied by the accumulation of explosive situations. A territorial dispute with Japan over the Senkaku Islands, a dispute with the Philippines over Fr. Hainan, disagreements with Vietnam over the drilling platform. For the diversity of the internal political life of the PRC, a Maidan was established in Hong Kong.

However, China has withstood. China is not being provoked.

During the territorial dispute, he chose to remove the oil platform in the South China Sea, despite the fact that the Kuandao Islands are considered to be the territorial possessions of China, and the armed forces of the Middle Kingdom have a clear superiority over the Vietnamese army. Yet China retreated. He understood what threatens his economy with a “small victorious war”. And how this war wanted to see in Washington.

“Chinese project” did not seem to bring the desired results. But this is unlikely to force the United States to abandon the strategy of managed bankruptcy of other states.

The main question is: who will be a claimant to “dispossession” in the next decade?

Everything that is written above is just science fiction. Scenario for a powerful detective.

All names, figures and facts are true. Conclusions - simple matches. And as a final chord I will give a short story, a parable.

President of the Royal Statistical Society, Sir Frank Yeats, was asked a question by a historian. In the preamble it was reported that eight English kings named Henry died on Friday, as confirmed by the annals of the royal court. "Is Friday the fateful day for the English Henry?"

Sir Yeats's answer was concise: “The statistics you provide do not contradict the statistical hypothesis you formulated. The Royal Society of Statistics recommends that you continue your observations. ”

Ctrl Enter
Noticed oshЫbku Highlight text and press. Ctrl + Enter
We are
Results of the week. "Who you are lucky, in fact, and will carry a cock, and such a bird as you, I, too, will rush!"Results of the week. "Well, do not change me because of every idiot!"
Military Reviewin Yandex News
Military Reviewin Google News
22 comments
Information
Dear reader, to leave comments on the publication, you must sign in.