March 15 2018
86
A beautifully built system of relations between states is bursting at the seams. What we were told from the high tribunes for many decades turned out to be fiction. International treaties, agreements adopted and ratified by states, conventions and so on. It turned out that the whole история humanity is just fiction. The main laws of how there were, and remain the laws of the wolf pack. The one who is stronger is right. 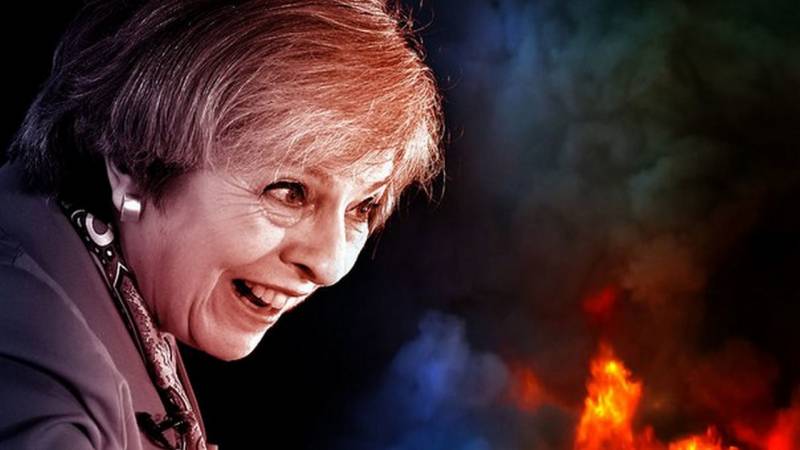 You are guilty of the fact that I want to eat. Our fabulist Ivan Krylov was right. But it was written many years ago. In a completely different era. Strength is everything. But only until such time as another force appears. Equal, and maybe more. Then the place of the strong passes over to another. And the old leader goes to die. Or die on the spot.

It is interesting in this aspect to consider the ultimatum of Britain. That arrogance and some recklessness, which showed the Prime Minister of the Kingdom. What is it? Phantom pains of a great empire or the stupidity of modern English politicians?

Alas, neither. Britain has long been the master of the fate of the world turned into a capo, working for the US administration. Prisoner of a concentration camp, who for the sake of an extra piece of bread mocks others. Mocks sometimes much tougher than the supervisor. But he has no rights and is completely dependent on the administration.

To take seriously what happened in the English Parliament, it is impossible. Ultimatum, like all the talk about the punishment of Russia, will quietly go nowhere. Investigation of the next "attempt" on the life of an English subject has already been classified. Similarly, it will happen to everything else. In the worst case, sanctions will be taken against the next group of Russians.

To understand the general situation in the Syrian theater, it is enough to recall a number of preceding events.

What happened next? And then, on Monday, the United States Permanent Representative to the UN, Nikki Haley, announced the readiness of the Americans to ban Russia from inflicting air strikes in Syria. And at the same time, about the readiness, without international decisions, to strike at Syria "in connection with Asad’s failure to implement the UN Security Council resolution on a cease-fire."

Literally in parallel with these statements, the head of the Pentagon, James Mattis, spoke about the intelligence available to intelligence about the upcoming chimataks in Eastern Gut. But ... "the Pentagon has no evidence that Damascus uses chemical weapons."

At the same time, Russian diplomats at all platforms are talking about training himatacs already by militants. Moreover, on the day when Haley angrily “denounced” Al-Assad and Russia in the UN Security Council, the Russian military presented evidence of the chemical weapons production by the militants. A handicraft workshop for the manufacture of chemical weapons was found in Gute.

Probably the only honest statement about the situation in Syria was made by President Assad. "... just blackmail, usually used only as an excuse to inflict air strikes on the Syrian army." It is clear that the successes of the Syrian army, the successes of the Turkish army in the fight against the Kurds force the Americans to intensify the use of aviation and other weapons. To help with military force or to forget and leave to their own devices.

There is a thought that American “rakes” are even more attractive than all the others. Washington with the stubbornness of an idiot is jumping on a rake. Although, in my opinion, again, it would be better to jump on a shovel shovel. The blow falls not on the forehead, but on another place that American politicians think.

The United States plays exactly as they played with the DPRK. The fact is that the "pacification" of the DPRK is advertised as Trump's victory over the Korean leader. Moreover, the advertising campaign is so active that even the political opinion of the United States strengthened the “winning opinion”. They are sure that they “broke” Kim Jong-un. Broke their own military strength.

In principle, the logic of the Americans is clear. Russia's responses to calls were always delayed in time and therefore interpreted remotely from the event itself. With appropriate information flips answers can always be masked. Therefore, unexpectedly for the Pentagon, the words of General of the Army General Valery Gerasimov, Chief of the General Staff of the Armed Forces of the Russian Federation, were heard.

"In the event of a threat to the life of our servicemen, the Armed Forces of the Russian Federation will take retaliatory measures both on the missiles and on the carriers who will use them."

What happened in reality?

For any attitude toward America, it’s not worth talking about the fact that the generals are less educated than in Russia in the American headquarters. The generals there are well prepared and understand in military affairs. That's why they shut up today. Two or three sentences from the speech of the head of the General Staff of the Armed Forces of the Russian Federation produced the effect of a bombshell.

The first thing that became clear to the Americans: Russia is well aware of the preparation of attacks on the Assad army. Thoroughly prepared himatak imitation operations in Eastern Gute and other areas of Syria are disclosed. Moreover, the Russians now no longer speak to the Americans "through closed channels", but spread their own intelligence information into open access.

And the second. For the first time, Russia openly announced the possibility of a tough response to American strikes. Nobody in the world made such statements after the collapse of the USSR. Even Kim Jong-un spoke of a limited strike. Gerasimov dotted all i. The answer will be not on rockets or airplanes, but on carriers! And which carriers are mainly used by the United States? Where should it fly from?

The coming days will be decisive in resolving the conflict. Americans are put in a situation where any decision will lead to a change in attitude towards the United States as the leading military power.

If there is a decision to strike at Damascus, the Americans will have to go into direct confrontation with Russia. Without neutralizing the air defense system, an air strike is impossible. It means that it is necessary to destroy the Russian systems managed by the Russian military. The answer, according to Gerasimov, is not long in coming.

Will the Americans refuse to strike? The image of the superpower will be lost. Although after the conflict with North Korea, it is silly to talk seriously about the superpower. Yes, and a businessman in power shows the most disgusting features of modern business, and not politics. The campaign will begin on "explaining to Russian the statements of the permanent representative to the UN."

In general, to talk about a possible full-scale war today is not worth it. Americans understand their own capabilities in such a war. There is no chance to win, but it is quite possible to get a lot of negativity in your own country for any outcome.

The upcoming events that await us are the assault of Eastern Guta by the Assad army. Storm hard. The elimination of terrorists there will no longer be connected with the agreements in Astana and Sochi. And according to intelligence data, military advisers of Western countries, mercenaries and other Western "ichtamnets" are in Gut today.

Washington went for broke. And got an unexpected result. So who beat someone?

Ctrl Enter
Noticed oshЫbku Highlight text and press. Ctrl + Enter
We are
Situational analysis of the death of the MH17 flight (Malaysian Boeing 777), made on the basis of engineering analysis from 15.08.2014Results of the week. “In our cooperative, the board is always agreed”
Military Reviewin Yandex News
Military Reviewin Google News
86 comments
Information
Dear reader, to leave comments on the publication, you must sign in.