Fondue from Russian mercenaries from "Liberation" 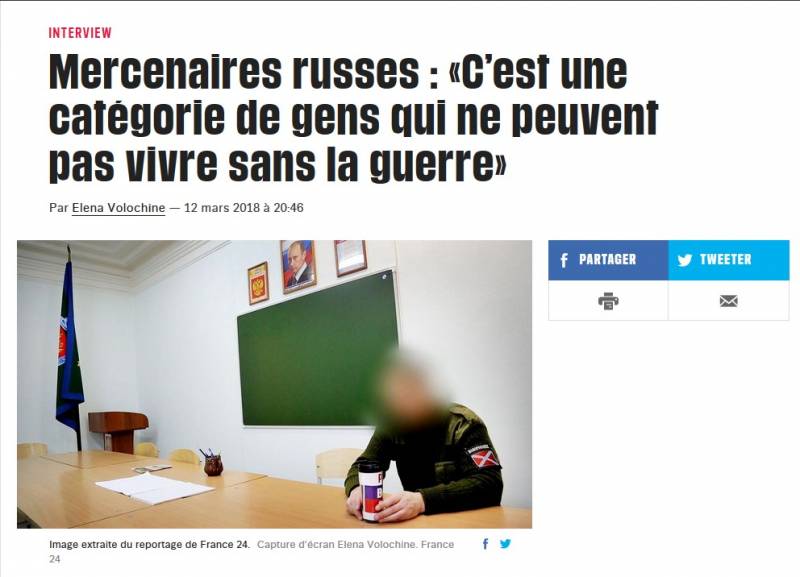 Since the topic of Russian mercenaries in Syria has begun to fade away, the topic of Putin’s promises has already been nibbled on, and the British topic with the poisoning of a former intelligence officer has not yet entered a normal orbit, we must probably splash gasoline on the old coals. What if it burns out?

In such an attempt caught one of the largest newspapers in France, "Liberation". With the filing of the channel France 24. The correspondent of the channel, one Elena Voloshin, talked to someone. Someone in a green uniform gave Elena some information on the topic of Wagner's mercenaries, and this one was filed as a "recruiter of mercenaries who collaborates with the main Russian private military company."

Recruiter Russian mercenaries: "This is a category of people who can not live without war"

I understand that in France and not such a croissant is cracked, but then “Libe”, as the newspaper is shortly called, was screwed up in full. But - in the spirit of events and tastes.

Mrs. Voloshin, communicating with this either a “field commander” or a “recruiter”, she herself was definitely not defined, gave him out as a citizen of Russia who was very well versed in these matters.

But either the budget failed, or the heads worked off rather badly, but in reality everything turned out in the style of the “Red Heat”. 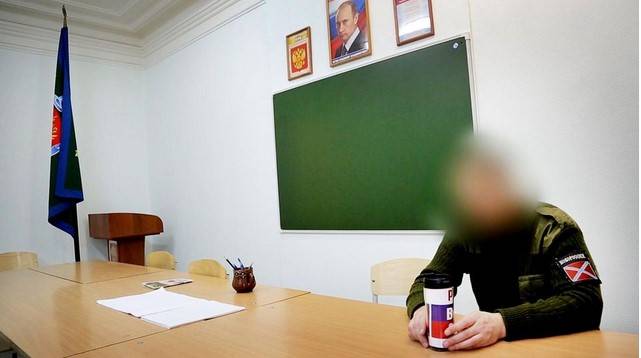 Everything is so nothing, and Putin's portrait on the topic, and the tricolor circle ... Here is the emblem of Novorossia completely out of topic for “Russian”, but there's nothing you can do. In the absence of a stamp on the pipifax. Where the bear, vodka and "Caliber", I did not understand.

I will return to the ownership of this Mr. Somebody at the end, but for now it is worthwhile to carefully read the heresy he gave to Mrs. Voloshin.

Although the option that all this nonsense in my head gave birth to Voloshin, I also do not exclude.

“The recruiter of mercenaries, who cooperates with the main Russian private military company, testifies that PMCs are present in Syria, and confirms that the bodies of the dead fighters are not returned to their families. The problem can be solved after Putin’s re-election, he believes. He told reporter of France 24 channel in Russia Elena Voloshinoy about the activities of these groups, shrouded in state secrets. Interview published in the newspaper Liberation ".

Great, right? Intrigue, what a! Especially the solution to the problem of returning the bodies "after the election of Putin." Before that - no way. They will lie somewhere and ...

"What is the main purpose of the presence of" PMC Wagner "in Syria?" - asked journalist.

"This is a fight against the Assad regime. The struggle for oil to make money. The reason for the existence of a private military company is to make a profit. And then the defense of the interests of the state where it cannot employ a regular army. In Syria, on the one hand, there is a battle against of global terrorism in the face of Islamic State *, and on the other hand, the collection of revenues in favor of our country so that Russia can seize a huge market of oil resources. It needs to ensure control over them. I think this is right. We are not Chali this war, but we will finish the job "- said the source.

This is serious. It smacks of a diagnosis, you know. For now, we will remember that the main goal of PMCs is “the fight against the Assad regime.”

Well, “Russia's seizure of the oil resources market” - this is it, gold! A smart man, of course, understands that in order to capture the oil market, it is not necessary to fight in Syria. It is necessary to fight on the stock exchange. But since in the opinion of such a highly set recruiter, the world market for oil resources is in Syria, we will not argue.

In general, it is difficult to argue with such ... Anyway, you lose.

"How is the cooperation with the Russian Ministry of Defense?"

"The Ministry of Defense defines combat missions. Wagner's mercenary soldiers act in tandem with the Russian aviation, with the support of artillery, - explained the field commander. - Ministry of Defense supplies mercenaries weapon, ammunition and equipment. But this cooperation is outside the law. That is, it does not officially exist. "

Russian aircraft bombed terrorists. Artillery hammer their own. Together with the army SAR. That is, along with Assad. Yes, they often choked up “non-system opposition” everyone there, but there is nothing to run around where serious guys do things.

Excuse me, but what did Mr Somebody say in the first question? We look. See: "This is a struggle against the regime of Assad." What is the result? We all ruptured here, telling how our army and the VKS help the legitimate president Assad to fight ISIS *, and this Somebody, excuse me, takes and declares the opposite.

Okay, we have places where not so much to hear. And there are people like Voloshin, ready to carry this nonsense around the world.

Although I think I should have found at least one sane person in the editorial office of Libere who would call 15. To come and ukolchik done.

Well there, cooperation is outlawed. You can digest, although he still ratatouille. Throw ammunition, suhpaykov ... Well, swallow. Albeit with a screech.

It is interesting, and there you can still remain normal (and I hope for the simplicity of the soul), if such a thing is charged in the brain. Shoigu and his entire headquarters are sitting and defining combat missions for the VKS and PMCs. Against Assad. In order to overcome the plants and wells.

Parisians, I feel sorry for you sometimes. Anyway, all the French who read this nonsense. After all, believe it, right? He writes the largest newspaper, with the name, with the past. Yes, today the affairs of the "Liberation" are not a fountain, Mr. master Rothschild drives at a loss, but still ...

And all the cases - they took some body in the Donbas. Photographed against the background of the portrait of Putin and the black flag (apparently, this is the PMC flag) of this Someone in uniform with the flag of Novorossia, and that’s all. It is clear that in the Donbas, in the DPR, and in the LPR, Putin is hanging in every office, there are no others there. Well, yes, the essence is not even in the design.

"If you are recruited in PMCs, it means that you sold yourself for money. She can use you as she pleases. According to the contract, you have no right to disobey. What will happen to you after death? You will be in a state of minced meat. And what about the bodies? put in a bag. They will be sealed in a zinc coffin. They will be sent home ... at best. At worst, they will be buried on the spot. "

Strong. Hard to say. Interestingly, and the state of minced meat is a prerequisite, or is it possible to do without it? From a bullet or a splinter there - is not an option?

Peculiar approach and understanding of the issue. Even a Frenchman who is aware of customs and morals in the Foreign Legion of France, will shudder. In the bag, chopped into minced ... Brr ...

"Do volunteers often come to you to go to Syria?" - asked the interviewer.

“Very often. Five to six people a week,” said the recruiter. “Young, old, someone has experience of fighting, someone does not. Cossacks and civilians. They want to join the PMCs.”

"The first soldiers were recruited in 2015 year, and if my memory serves me, then the salaries reached 450 thousand rubles per month (6,5 thousand euros), at the moment the guys get from 150 thousand (2,1 thousand euros), depending on the combat missions performed. "

Strange, right? Recruiter - and does not know how much mercenaries receive. It's funny even. We once gave the order of numbers. Received just from direct participants. And, to be honest, I wouldn’t work for such pennies in this grabber, only accidentally masquerading as PMCs.

"It is always difficult for anyone who returns from war to adapt to ordinary life. Because if a person fought for a year or a year and a half, when he returns, where does he go to work? A guard in a supermarket? Where is the half-drunk 18-year-old young man who will teach him life and humiliate "He is used to solving all his problems by pressing the trigger, his hands itch. This is a category of people who are called a" man of war. They cannot live without war. A private military company is always waiting for them "

Strong land Donbass storytellers, strong. Right there is no other place for the veteran, as a security guard in the supermarket, right? Spattered and humiliated. Well, well ... And, even at the gas station, you can insert a filling pistol. The third is not given. The third is in PMCs. On the way to the bag of minced meat, buried in the sand.

Just to repeat: I feel sorry for the French, who are being fed by someone with such filth. Because the fondue from you understand what - it is all the same you understand that, poured over with melted cheese or chocolate. Not much better taste.

Obolvanivanie. Mass, ruthless and merciless, unfortunately, there is. Alas, it used to be some kind of competition, who is smarter, who will give more material. Now - who's bad. If only it was hotter and believed at least a little.

And this is in the country of the first democratic revolution. Although ... What is there to argue. "Liberation" is "liberation, emancipation." That freed. And liberated. Re-evolved.

Ctrl Enter
Noticed oshЫbku Highlight text and press. Ctrl + Enter
We are
PMC Wagner and St. Petersburg FountainResults of the week. “If I am leaning against a warm wall in a quiet place, then I’m still nothing at all!”
Military Reviewin Yandex News
Military Reviewin Google News
11 comments
Information
Dear reader, to leave comments on the publication, you must sign in.