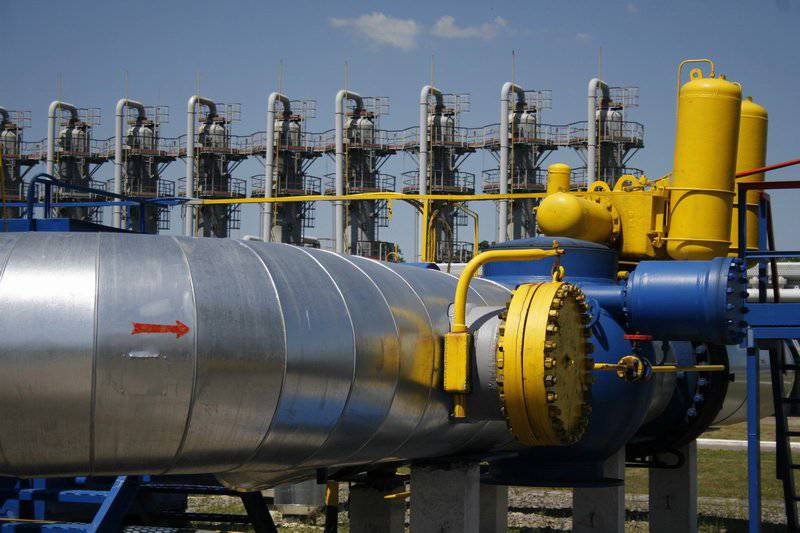 The statement of the Prime Minister of Ukraine, Mykola Azarov, that Ukraine is interested in the implementation of the Trans-Caspian gas pipeline project, has caused a slight stir in our country and abroad, primarily in Russia. In particular, the Ukrainian prime minister said this during a meeting with Azerbaijani President Ilham Aliyev in Baku in early April. The head of government recalled that Ukraine is interested in diversifying energy supplies to the country. In this regard, Azarov said, when the parties involved in the construction of the Trans-Caspian gas pipeline, reached an agreement, Ukraine is ready to consider the question of its participation in it.

Also, the details and conditions that the government of Ukraine has put forward to this project have become known. Thus, according to mass media, Ukraine is ready to invest in the construction of the Trans-Caspian gas pipeline 790 million euros, provided that it includes a branch to the LNG terminal in the Georgian port of Kulevi, from there gas can be supplied to Ukraine by sea (for this purpose it is necessary to build a branch from Trans-Caspian gas pipeline, which will allow increasing the volume of transshipment through the terminal in Kulevi from the current 10 to 20 billion cubic meters of gas per year). In Ukraine, the gas will receive the LNG terminal, which is planned to be built at the port of Yuzhny. Also, according to some data, Kiev has already sent a formal proposal for its participation in the project to Turkmenistan and Azerbaijan.

The reason for the resonance, which caused these plans of Kiev, has a purely political flavor: as you know, the Trans-Caspian gas pipeline project causes rejection of Russia, since it is intended to connect Turkmenistan to the Nabucco project. While the latter has the main objective to provide the EU countries with Caspian energy bypassing the Russian Federation, i.e. reduce the energy dependence of the European Union on Russian gas. It is also no secret that Nabucco is the main competitor of the Russian South Stream gas supply to Europe, bypassing Ukraine.

In particular, the Trans-Caspian Gas Pipeline (TCG) project involves laying a “pipe” of 300 km in length along the bottom of the Caspian Sea in order to connect Turkmenistan and Azerbaijan. Further, this gas pipeline, partially using the existing South Caucasus gas pipeline, should ensure the delivery of Turkmen gas either to Nabucco or to the Black Sea coast of Georgia. Further, there are various options for delivering gas to European consumers - either to the west coast of the Black Sea and then to EU countries, or liquefying it and transporting it in tankers to European LNG terminals, or via the White Stream. The route Tengiz (Kazakhstan) - Turkmenbashi (Turkmenistan) - Baku (Azerbaijan) - Tbilisi (Georgia) - Erzurum (Turkey) is planned to transport annually 20-30 billion cubic meters of gas. The project cost is estimated at 7,9 billion euros, while the gas pipeline in the Baku-Tbilisi-Erzerum section is already operational.

The EU perfectly understands the prospects that this project opens in the field of diversification of energy supplies to Europe. And it was the “big games” around this project that caused last year’s serious differences between the European Union and Russia. In particular, in September 2011, the Council of the European Union approved the mandate to hold EU negotiations with Azerbaijan and Turkmenistan on the conclusion of a legally binding agreement on the construction of the Trans-Caspian gas pipeline. The Russian authorities immediately expressed "surprise" with this decision of the Europeans, indicating that this would lead to a complication of the situation in the region.

Expressing the Kremlin’s position on this matter, the Russian Foreign Ministry said: “As far as we know, for the European Union this is also the first such experience, and we are surprised that it is supposed to be“ delivered ”to the Caspian Sea, to the shores of which none of the European Union states goes.” Moscow stressed that “attempts to intervene in Caspian affairs from the outside, especially on issues that are sensitive to the members of the Caspian Five, can very seriously complicate the situation in this region and adversely affect the ongoing five-sided negotiations on the new legal status of the Caspian Sea.” According to the Russian side, "decisions on such large-scale projects should be made with the participation of all the Caspian littoral states." “We hope that the Council of the European Union will give due attention to the position of Russia and other member states of the Caspian Five and refrain from actions not agreed in the appropriate format,” concluded the Russian Foreign Ministry.

Thus, Russia, speaking against the construction of the TKG, focused not on its economic interests, but on the political situation in the Caspian region, where the issue of determining the sea border and the distribution of Caspian resources still remains unresolved. On disagreements over the marine part of the project, they play in the Russian Federation, taking Iran as an ally. In particular, Russia and Iran believe that the issues of laying pipelines on the seabed should be resolved with the consent of all the Caspian littoral countries. While Azerbaijan, Kazakhstan and Turkmenistan assume that this issue can be resolved by two contracting parties, and not by all five littoral states.

Europe did not respond to this position of Moscow in any way, and in October 2011 r, now ex-President of the Russian Federation Dmitry Medvedev again raised this issue, expressing the hope that Russia's partners in the Caspian basin would adhere to the previously reached agreements in the field of energy cooperation. “I would like to draw the attention of members of the Security Council (RF) to one of the topics - the topic that we discussed, and I discussed with my colleagues - the Trans-Caspian gas pipeline,” said Medvedev, expressing the hope that the partners of the Russian Federation on the Caspian Summit, “Who think through various energy cooperation procedures, will adhere to previously adopted agreements”. According to him, the gas pipeline project is “a rather complicated issue, which, of course, is directly dependent on the status of the Caspian Sea as an inland sea and requires the coordination of the positions of all the states participating in the Caspian summit.” At the same time, he added that “in any case, Russia should formulate its position in order to bring it to the attention of our Caspian partners.” According to Medvedev, it is primarily about legal status and environmental safety issues, "to which we must pay attention, taking into account what is currently happening in the Caspian Sea basin."

Thus, Moscow strengthened its position (or, at least, so decided): the “environmental aspect” of the TCG project was added to the really difficult issue of the legal status of the Caspian Sea.

At the same time, recent events indicate that the dialogue with Russia around the TAG has gone into a deaf corner. Thus, the statements of the Ukrainian Prime Minister Mykola Azarov on the project coincided with the talks in Baku between Russian Foreign Minister Sergei Lavrov and the Azerbaijani side, during which the participants could not find a common language on the planned construction of the Trans-Caspian gas pipeline. Both Russia and Azerbaijan declared the need to conclude the negotiations of the Caspian states on the status of the Caspian Sea as soon as possible, but further disagreements began. “We proceed from the assumption that external players (EU) will respect the opinion of the Caspian states,” Lavrov said, pointing out that the Caspian states first need to agree on the status of the Caspian Sea, and then lay something along its bottom. In Baku, they send Moscow to Brussels (hence the words of the Russian minister about external players) and indicate: Azerbaijanis will build their part of the pipe only on their own territory, and then deal with the main customer of gas - the EU.

By the way, before these negotiations, the Minister of Industry and Energy of Azerbaijan Natik Aliyev informed that the Trans-Caspian gas pipeline is an important and large project, and Azerbaijan is interested in its implementation. According to him, this project will allow Azerbaijan to turn from a gas producing country into a transit country. "It’s about how Turkmenistan’s participation in this project will be. It’s not just gas reserves, but also who will build this gas pipeline. There must be mutual commitments, after which this project can be implemented,” said Aliyev . Earlier, Natik Aliyev said that two important documents are being prepared, which are planned to be signed this year. The first document is political in nature and expresses support for the Southern Gas Corridor (of which the Trans-Caspian gas pipeline is a component). It will be signed by the presidents of Azerbaijan and Turkmenistan, Ilham Aliyev and Gurbanguly Berdymukhammedov, as well as the head of the European Commission, Jose Manuel Barroso. The second document is an intergovernmental agreement between official Ashgabat and Baku on the construction of the Trans-Caspian gas pipeline, which will define the responsibilities and guarantees of the parties for the project.

In fact, these statements by the Azerbaijani side are very important. The bottom line is that earlier the TCG project rested not only and not so much on Russia's position, as on disagreements among the project participants themselves. The question arose as to how active Azerbaijan would be in supporting the TAG, since de facto this country and Turkmenistan are competitors in the supply of gas to the European market. In fact, it is Baku’s position that is key to the implementation of the Trans-Caspian gas pipeline project and the subsequent transit of Turkmen gas to the Black Sea coast. The current statements of the Minister of Industry and Energy of Azerbaijan actually put an end to these doubts, giving the project a green light. Although, in fairness, we note that another Caspian state represented by Kazakhstan today has not demonstrated a clear position on the project, although there is no “competition problem”, as is the case with Baku.

As for Ukraine, in the case of the implementation of the Trans-Caspian gas pipeline project and our country's participation in the project, Kiev would have fulfilled its old dream, becoming the recipient of Turkmen gas in four to five years (of course, with the planned implementation of the TAG). This would allow Ukraine to get off the Russian “gas needle” and at times reduce the political urgency of the gas issue in the Ukrainian-Russian dialogue. Although in this case, as we see, we are talking not only about the political will of the Ukrainian leadership, but also about many other external factors that Ukraine is often unable to influence.

However, regarding the political will of Kiev, not everything is clear. It is not at all possible that Azarov’s statement about Ukraine’s readiness to take part in the TAG is no more than an attempt to blackmail Russia with the goal of achieving the desired discount on Russian gas. But get to the point, and Kiev will quietly step aside, not wanting to go for a tough confrontation with the Kremlin.

In addition, it is not completely clear where the Ukrainian government will find money to participate in the TAG - in the light of squeezing funds for Yanukovych’s social initiatives, Azarov has every penny in his account.