Iran: a strong country or a colossus with feet of clay?

March 15 2018
20
Iran, one of the key states of the Middle and Near East, a regional power, has been trying to pursue an independent foreign policy since 1979, when an Islamic revolution occurred in the country. In recent years, Iran has become a major regional ally of Russia, demonstrating a common position on a number of issues of fundamental importance to our country. First of all, it concerns the situation in Syria, where Iran, like Russia, supports the current President Bashar al-Assad. Naturally, Russia is very interested in preserving a united, stable and strong Iran. The collapse of this state or even a serious destabilization of the situation in this country of Russia is extremely unprofitable, since it will inevitably affect the situation on the southern borders of the Russian Federation. Iran is holding back the activity of radical terrorist organizations in the Middle East, just as Gaddafi Libya was a natural barrier for African migrants on their way to Europe. 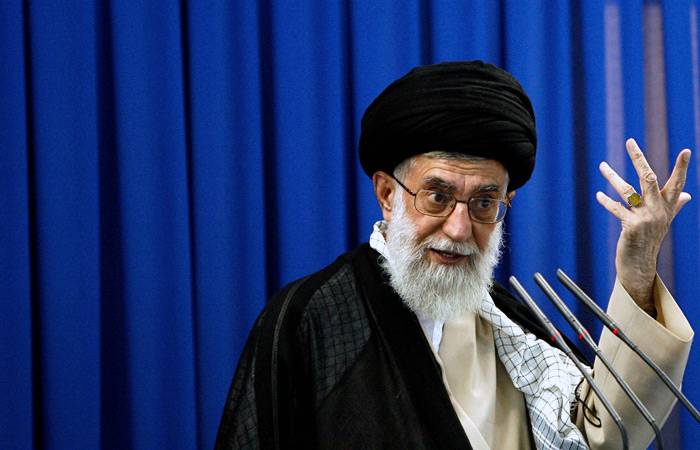 Political stability in Iran and the strength of this ancient state give rise to the most contradictory assessments. Some experts argue that Iran is the most robust and centralized state in the Middle East, in fact, devoid of the problems that most other states are facing, including Turkey. Another point of view draws our attention to the numerous internal contradictions in Iran - between the “conservative” fundamentalists and the more secular part of society, between the Persians and other peoples of the country.

The specificity of Iran lies primarily in its multinational composition of the population. Currently, the population of this country is approximately 78,5 million (estimated 2015 of the year). Persians - the dominant people of Iran, who gave the country the name, the state language, and culture. Persians account for about 50-60% of the population. The exact ratio of different peoples and ethnic groups is unknown, since many Iranians are of mixed origin, and national borders are gradually eroding. Almost all the Persians are Shiite Muslims. The Persians are approached by several other peoples of Iran who are linguistically and culturally close and who do not seek separation. These are Iranian-speaking Talyshs, Gilians and Masendrans on the southern coast of the Caspian Sea. They account for about 7% of the population. In the south-west, Iranian lurs and Bakhtiars live, with whom the Iranian authorities also never had any particular problems. 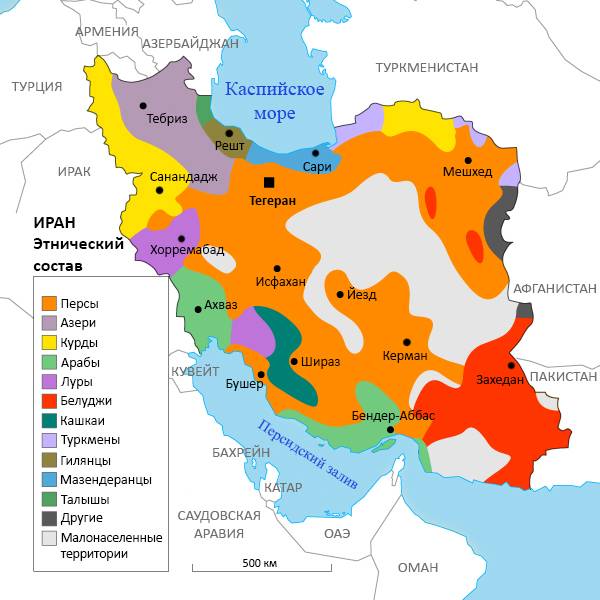 However, Azerbaijanis are not offended in modern Iran. For example, Ayatollah Ali Khamenei himself and many high-ranking religious, political and military leaders of the country are ethnic Azerbaijanis. But this circumstance does not prevent Azerbaijani nationalists from discussing discrimination against the Azerbaijani population in Iran. However, among the overwhelming majority of Iranian Azerbaijanis, these arguments do not arouse any particular sympathy. Another thing is that speculation on Persian-Azerbaijani relations can be activated due to the participation of some external forces. Of course, in the US, “sleep and see,” as Iranian Azeris begin mass protests against Tehran’s “discriminatory policies.” True, so far “fighters against discrimination” from among politicized Azerbaijanis live in the West, where there are representative offices of a number of opposition organizations, mostly very small in number and not using any real influence on the situation in the country.

More difficult is the situation with two other large and active peoples of Iran - the Kurds and Balochi. Kurds inhabit the west of the country, the border with Turkey. Of course, the situation in Iranian Kurdistan is not as tense as in Turkish and, especially, in Syria, but the Kurdish factor is present in Iran and even those who have no doubt about the power and political unity of the Iranian state admit it. The West is making the most active efforts to intensify the Kurdish separatist movement and kindle the flames of civil war in Iranian Kurdistan. To this end, opposition organizations, rebel groups that, however, do not pose a serious threat to the Iranian state, are funded.

More difficult situation - in the extreme south-east of the country. Here, in the desert Ostan (province) of Sistan and Baluchistan, there are Baluchis, an Iranian-speaking people, who, unlike the Persians, are Sunni Muslims and have close ties with Baloch tribes in neighboring Afghanistan and Pakistan. The Baluchi is an archaic nation that preserves tribal division, the power of traditional tribal leaders, and is poorly controlled by state bodies. Since 1970-x - 1980-x. among the Baluch, radical groups of a religious fundamentalist nature were active, weapons in the hands against the central government. Since then, Balochistan has been a real headache for the Iranian leadership. Periodically, terrorist attacks occur in this region, primarily against government officials and Iranian military personnel.

Due to the unstable situation in Balochistan, Tehran is forced to hold in the region impressive forces of the Islamic Revolutionary Guard Corps. By the way, instability in Balochistan has its own explanation - this region is of great importance for the economic development of the country, because it is through it that Iranian exports to neighboring Pakistan transit. In the framework of the development of exports of Iranian natural resources, primarily gas, to Pakistan and China, Balochistan plays a crucial role. Therefore, it is easy to predict that terrorist groups in the region will not slow down their activity - even with more active opposition from Tehran, they will be sponsored and supported by US intelligence agencies. 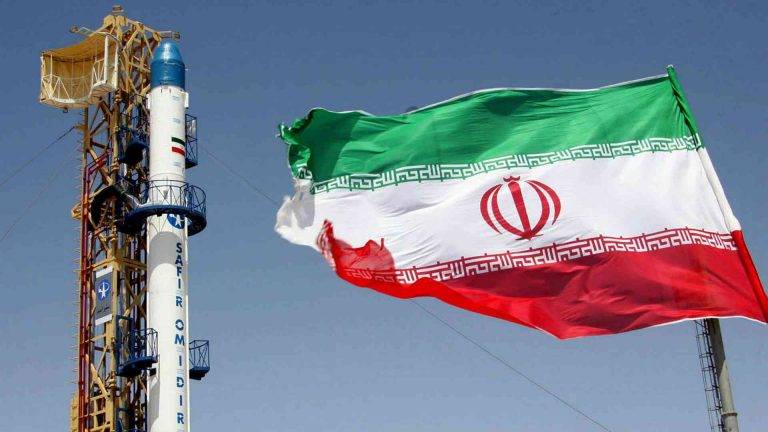 Ethnic problems are not the only factor that could worsen the internal political situation in Iran. There are indeed contradictions in the country between the authorities and the part of the Iranians who are more inclined to secular values ​​and lifestyle. Cultural globalization is bearing off in Iran, where many Iranians, especially intellectuals, and businessmen, are beginning to suffer from the restrictions that the ayatollah regime imposes on life in the country. For this part of the Iranian population, ideas of at least relative liberalization of cultural life in the country look more attractive. The Iranian authorities, investing in the development of science and education, including technical and natural science, themselves "dig a hole", contributing to the gradual spread in society of skepticism about the dominant ideology. On the other hand, Iran cannot fail to develop science and education - being in hostile relations with the West and claiming the status of power of the Islamic world makes Tehran seriously engage in the development of the military-industrial complex and the creation and promotion of new technologies.

Socio-cultural schism in Iranian society is growing. Its “advanced” part today lives, despite the restrictions imposed by the authorities, almost like Europeans. Yes, there are prohibitions on alcohol, there is a certain “dress code” for women and men, norms of behavior, but otherwise the differences are not significant. Another thing - the Iranian province. In the remote areas of the country, time has stopped - agriculture at the level of the mid-twentieth century, national clothing, the lack of basic amenities and normal infrastructure. On the other hand, it is the provincial conservative majority that gives the main support to the existing government. Therefore, it is safe to say that Tehran really represents the interests of the majority of Iranians - perhaps not the most "advanced" in cultural and educational terms, but the majority.

Iran is experiencing numerous economic problems associated primarily with the presence of sanctions imposed on the country at the initiative of the United States and supported by many countries of the world. Sanctions seriously impede the economic development of Iran. For a long time, Washington tried to isolate Iran from nuclear technology, rightly fearing that, following the “peaceful atom,” Tehran might be concerned about the use of nuclear technology in the military sphere.

But both Russia and even the countries of Western Europe have shown in this issue a stubborn reluctance to go on about the United States and continued contacts with Tehran in the field of nuclear technology. By the way, it was Washington’s sanctions that led Iran to worry about the development of both independent nuclear physics, its energy industry, and the industry producing the corresponding equipment. That is, as in the case of Russia 2014, the sanctions went to Iran not only to harm, but also to benefit. But for ordinary Iranians, not only Tehran’s success in the energy or military industry, but also the problem of ensuring domestic consumption, which remains low in Iran, is becoming increasingly important. This circumstance contributes to the gradual spread of opposition sentiments in the urban environment among the Iranian middle strata.

Finally, one should not discount such a serious factor as possible contradictions within the Iranian religious, political and political elite. It is worth noting that even in the early stages of the Islamic Revolution, its elite and leaders were not united. Ayatollah Khomeini managed to push aside all potential rivals and reduce possible risks from their activities. Now the situation has changed. Firstly, Ayatollah Ali Khamenei, unlike his predecessor, still does not have such authority and comprehensive control over the situation. Secondly, the contradictions between religious authorities and the military elite, traditional for the East, remain. Iran, like other eastern countries, is no exception - here the army is a carrier of secular principles. It was precisely in order to create a counterweight to the army that the Ayatollahs created the Corps of Guardians of the Islamic Revolution - in fact, the second armed forces of the country with their own ground forces, aviation and maritime units. 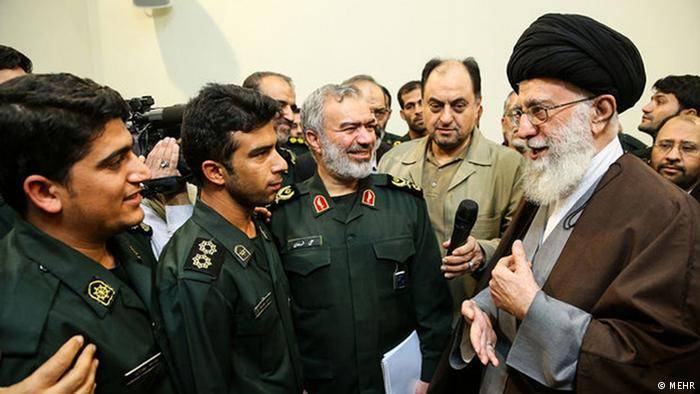 The generals and officers of the IRGC are more reliable due to their deep ideological motivation, however, here the ayatollahs sometimes encounter contradictions. For example, back in 1999, a group of 24 senior officers of the IRGC wrote a letter to President Mohammed Khatami, expressing concern about the involvement of the army in dispersing student unrest in the capital. Now one of those officers, Major General Mohammad-Ali Jaafari, is the commander of the Islamic Revolutionary Guard Corps. True, the authority of Ayatollah Khamenei among the military is very high, because it was he who turned the Islamic Revolutionary Guard Corps from ordinary militia into the country's elite armed forces.

It is clear that there is not yet any talk about a large-scale conflict of interests within the Iranian elite, but the division into “right” conservatives interested in preserving the ideals and values ​​of the Islamic revolution, and “left” renovationists seeking certain political reforms, is still present. It will be exacerbated with further political changes in the country, which will inevitably follow after the departure from the political scene of such a significant figure as Ayatollah Ali Khamenei, who has actually run the country since 1989, for almost thirty years. Iran’s Supreme Leader Ali Khamenei will be 79 in years in July - a very old age. Of course, the advantage of the Iranian political system is that religious leaders, of course, will be able to quickly navigate and choose a new great ayatollah from their midst. But Ali Khamenei, Khomeini’s closest ally, was the one who created modern Iran, was at the forefront of the existing political system. Therefore, his departure will inevitably cause big changes.

Thus, it is premature to say that the political risks for Iran are very great, but they should not be discounted. At any time, the political situation in the country can change, and then all the problems that are minor at this time can come to the fore, and then Tehran will not avoid big trouble.

Ctrl Enter
Noticed oshЫbku Highlight text and press. Ctrl + Enter
We are
Results of the week. “If I am leaning against a warm wall in a quiet place, then I’m still nothing at all!”List of CIA-funded Russian public organizations
Military Reviewin Yandex News
Military Reviewin Google News
20 comments
Information
Dear reader, to leave comments on the publication, you must sign in.