Russian provoked diarrhea in the residence of the British Queen 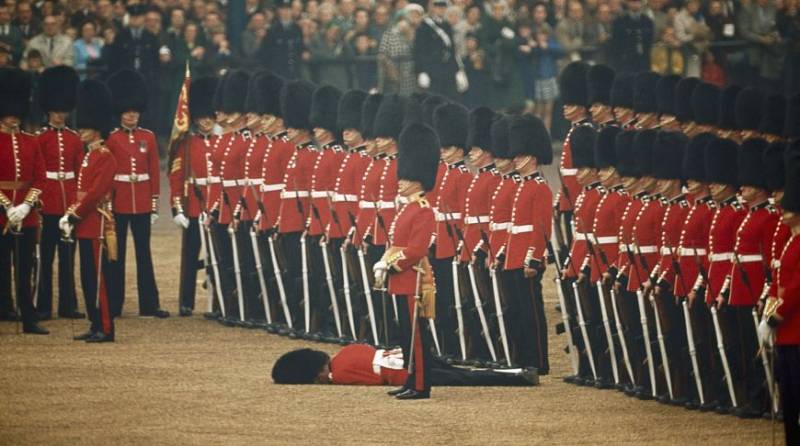 Despite the harsh statements of British Prime Minister Theresa May, and her warning not only to send Russian diplomats out of the country, but also to count the poisoning of ex-Colonel Sergey Skripal and his daughter as an “act of aggression”, Russia continues to interfere in the internal affairs of the state.

Outrageous and inexplicable, but Russian agents, probably, easily penetrated into the territory of Buckingham Palace. They are supposed to have applied an unknown substance that caused the strongest indigestion in the staff of the residence of the British royal house.

The Government of Her Majesty still refuses to comment on this incident, and, in particular, whether the queen and her family members were struck by this disease.

British intelligence agencies immediately stated that they were ready to provide irrefutable evidence of Russia's possible involvement in the epidemic of diarrhea in Buckingham Palace. In particular, as noted in the secret intelligence special service "SIS / Military Intelligence, MI6", the Russians had developed special preparations back in the 40s of the last century, which, when spraying over the battlefield, caused the strongest indigestion in the enemy.

It is significant that the activation of this drug did not occur immediately, but by a special audible signal! ”, Which began to be issued by Russian troops. In English, it sounds like this: “Ur-rr-ra!” ... Diarrhea acquired an avalanche-like, uncontrollable character after the Russians began the second stage of impact on the enemy with exclamations “Za Stalina!”

Even then, the entire civilized democratic world demanded that the Russians stop using this misanthropic and inhuman weapon.

However, Russia, apparently, not only retained it in its arsenals, but also significantly improved it. Now, probably, this substance, after its delivery to the objects of aggression, is activated in connection with the statements of Russian officials, and is provoked by hackers from the same country.

MI6 has the data that Russian agents, disguised as tourists in the square near Buckingham Palace, chose the moment when the wind was blowing in its direction, and sprayed the drug. The first victims of his use were the soldiers of the Life Guards of Her Majesty's Coldrial Regiment, who were on guard near the palace. Having changed from the service, they went to rest in one of the pubs, where the poisoning occurred. Currently, the guards are in intensive care. The exact number of poisoned soldiers is unknown.

Then, after some time, it is possible that poisonous substance entered the Buckingham Palace, where huge queues to the toilets, consisting of butlers, maids, and other personnel, were formed due to the loose windows.

The queen was even forced to deliver dry closets to the palace, due to the fact that the existing points of departure for natural needs could not cope with the flow of visitors.

The epidemic of diarrhea at Buckingham Palace has troubled NATO. “Using diarrhea is a terrifying and unacceptable act. The UK is an extremely important ally, and this incident is of utmost concern to NATO. The Alliance is in close contact with the United Kingdom authorities on this issue, ”said NATO Secretary General Jens Stoltenberg.

US Secretary of State Rex Tillersen is outraged by the behavior of the Russian Federation, which, according to him, continues to be an irresponsible force that carries instability to the world.

He also said that Washington is fully confident in the UK investigation and its estimates that Russia probably organized a massive indigestion among thousands of British citizens.

“There is never any excuse for such an attack, for organizing mass diarrhea, and we are outraged that Russia seems to be demonstrating such behavior again. From Ukraine to Syria, and now to Great Britain, Russia continues to be an irresponsible force, carrying instability to the world, operating with open disregard for the sovereignty of other countries and the lives of its own citizens ..., ”the US Secretary of State firmly noted.

This incident will soon be considered at the regular session of the NATO Council.

Meanwhile, the allies of Britain have already begun to provide assistance, sending large quantities of medical preparations to neutralize the effects of diarrhea.

British citizens have the right to ask their government how long it will gaze at the actions of Russian agents through their fingers? Is the government capable of ensuring the safety of the citizens of the United Kingdom? Or should we expect such a large scale epidemic of indigestion in the English that it will grow into a real ecological catastrophe?

Britain must call on the entire free world to give a decent response to such Russian intrigues. In such a situation, it is necessary to boycott the upcoming FIFA World Cup, which will be held in Russia, since the players of the English national team will most likely be destined to become the next victims of indigestion.

Ctrl Enter
Noticed oshЫbku Highlight text and press. Ctrl + Enter
We are
About Stalin and KhrushchevWhat you didn't want to know about England
Military Reviewin Yandex News
Military Reviewin Google News
138 comments
Information
Dear reader, to leave comments on the publication, you must sign in.