The case of General Slashchev

March 17 2018
80
The great success of Soviet intelligence at the beginning of the 1920s was the return to Russia of a major white emigration figure, General Slashchev [1]. 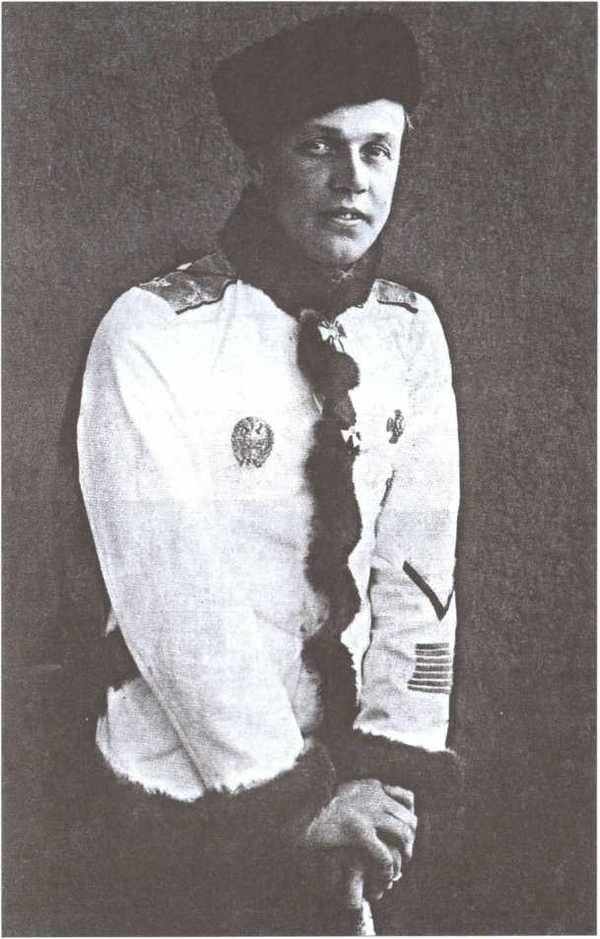 This история overgrown with many rumors and speculations during the life of its main character. Its official version, presented by the President of the Society for the Study of the History of Domestic Special Services A.A. Zdanovich in the book “His and Others' Intrigues of Intelligence” reads as follows: “The struggles of Slashchov with the Wrangel entourage and directly with the Baron (Wrangel [2]. - PG) split the defeated, but not completely broken, White Army. that fully complied with the interests of the Cheka and the Red Army Intelligence Agency in Constantinople. Therefore, without refusing to work with other generals and officers, the Soviet special services focused their efforts on Slashchev and the officers who shared his views.

It was recognized that it was necessary to send a responsible officer to Turkey, with a request direct contacts with the general ...

Commissioner of the Cheka (in the case of Slashchev. - PG) became Ya.P. Tenenbaum. His candidacy was proposed by the future Deputy Chairman of the VChK, I.S. Unshlicht [3] ”[4] as a person personally known to him from the joint work on the Western Front, where Tenenbaum under his leadership was successfully engaged in the disintegration of the Polish Army. “In addition, Tenenbaum had a wealth of underground experience, knew French well, which in Constantinople could be useful given the activity of French counterintelligence” [5]. Tenenbaum, who received the pseudonym “Yelsky” [6], was personally instructed by the chairman of the RVSR [7] Trotsky [8] and Unshlicht. 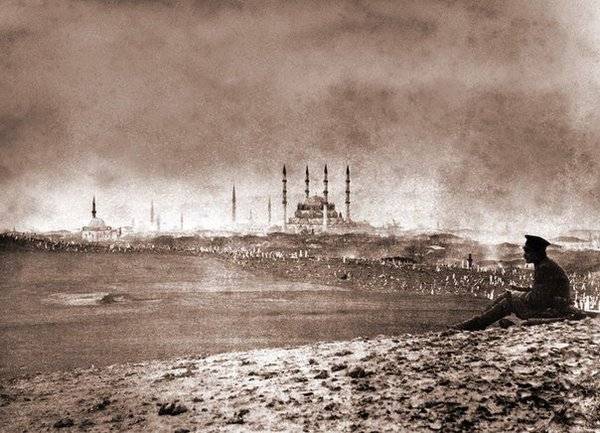 “The first contacts of the authorized Cheka with Slashchev took place in February of 1921. They were more likely to be exploratory in nature: the positions of the parties were clarified, possible joint actions in Constantinople were determined. At that time, Yelsky did not have the authority to propose to Slashchev to return to Russia ... In turn, Slashchev could not help but have serious hesitation in making a decision to leave for Soviet Russia.

Yelsky had to arrange meetings with Slaschov, observing the strictest conspiracy. He used all his skills as an old underground worker in order to protect himself and the officers with whom he maintained contact from failure at the initial stage of work. After all, at least three official counterintelligence agencies acted in Constantinople. [9] All of them were well paid and could recruit numerous agents to identify the underground work of the Bolsheviks ”[10].

The decision to return to their homeland Slashchev took in May 1921. This was stated in a letter from Constantinople to Simferopol, intercepted by security officers, and this gave them decisiveness in their actions. When embarking on the operation to return Slashchev, the Chekists allowed "amateur activities", as the Soviet political leadership had not yet made a final decision on this issue. Under the circumstances, the operation began in mid-October, since at the beginning of the same month a report was received by the Politburo by an officer of the Intelligence Agency of the Ukrainian and Crimean forces Dashevsky, proposing to transfer Slashchev and several officers from Turkey to Soviet territory.

In the end, “Slashchev and his like-minded people managed to leave the country house on the shore of the Bosphorus unnoticed, to get into the port and dive onto the steamer“ Jean ”.

The French counterintelligence through the agent of the number of Russian émigrés quickly found out that former Assistant Minister of War of the Crimean regional government, Major General A.S., secretly left with Slaschov. Milkovsky, commandant of Simferopol, Colonel E.P. Gilbikh, head of the personal convoy, Colonel M. Slaschova Mezernitsky, as well as his wife Slaschova with his brother.

A day later, the steamer “Jean” moored to the pier in the Sevastopol bay. VChK employees met his passengers at the pier, and a personal train, Dzerzhinsky, was waiting at the station. The head of the VChK interrupted his vacation, and together with Slashchev and his group, he left for Moscow. ”[11].

The newspaper "Izvestia" of 23 in November 1921 published a government report on the arrival in Soviet Russia of General Slashchev with a group of military men. Upon returning to their homeland, they signed an appeal to the officers who remained in a foreign land with a call to return to Russia. The transition of General Slashchev to the side of Soviet power prompted many participants in the White movement to return from emigration. [12] 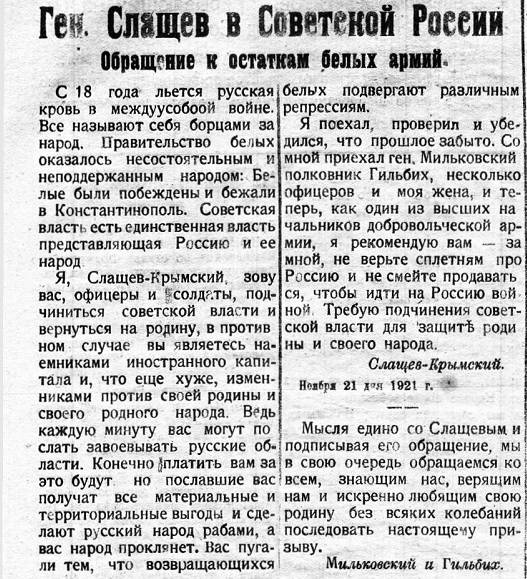 However, the official version is challenged by information from the essays "The Work of the Comintern and the GPU in Turkey", written in Paris in 1931 and unpublished, by the former Deputy Trade Representative in Turkey I.M. Ibragimov [13], in which he says: “The same Mirny [14] told me that General Slashchev did not voluntarily return to the USSR: they just negotiated with him, lured him to some restaurant, got him drunk, and, because he was a drug addict, they pumped him with cocaine or opium and took him to a Soviet steamer, and he allegedly woke up only in Sevastopol, and then he had no choice but to sign the famous appeal addressed to the officers (I leave all responsibility to the truth story on the Peace) ”[15].

Author:
Pavel Gusterin
Articles from this series:
Moses Axelrod as a scout in the Middle East