How does the US use the Ukrainian puppet Security Service of Ukraine for provocations against Iran?

March 13 2018
11
A few days before the onset of 2018, and during the first few days of this year, Iran was known to be shaken by protests. With clashes with the police, with the victims, with cries that "someone must leave" and all the rest in this spirit.


The Western media immediately began to publish materials in which the protests were called "spontaneous" and allegedly connected with the "deterioration of the economic situation in Iran." I wonder how “spontaneous” protests could have arisen at once in several large cities of Iran, including Mashhad, Tehran, Tabriz and Shiraz, which are clearly not city-neighbors.

And not only because in the cities of large ... The so-called opposition raged in the provinces, albeit less actively than in the Iranian metropolitan areas, but still. Coordination went, as in a whole series of other cases with “dissatisfied civil society”, through social networks, instant messengers and other types of network communication.

It is noteworthy that as soon as the Iranian authorities, to put it mildly, corrected the work of the mentioned messengers, the activity of “spontaneous” protests of “discontent with economic indicators” began to decline.

What else drew attention then: zealous oppositionists on the streets announced the "failed economic policy of the current Iranian authorities." What are the economic indicators of this country in recent years? It turned out that the growth of Iran’s GDP in 2016-2017 could well be the envy of the economies of most countries of the world. So, in 2016, the Iranian economy grew by 4%, in 2017 - it added more than 4,2%. This is higher than the global average.

It is clear that the protests were not spontaneous, and the voiced "unintelligible indicators of the economy" certainly to the main reasons for the release of "dissenters" to Iranian streets can not be attributed to the root cause. But an interesting fact: at the same time, when local “mayorites” were walking around Iran with calls to send the current authorities at least to resign (or even the gallows), Trump in the United States openly declared that the so-called nuclear deal with Tehran was “extremely is bad. The same thesis was repeated in Israel, the capital of which Trump recognized Jerusalem. Allegedly, by lifting anti-Iranian sanctions, Tehran was given an opportunity to continue work on “top-secret facilities” on a nuclear program that “will bring chaos to the Middle East”. And before the conclusion of a “nuclear deal” with the Iranian authorities in the Middle East, everything was quiet, peaceful, and the water, of course, was a balm, Iran, who else? ..

In Tehran, they responded by saying that if Trump did get out of the deal, to which the parties went for years, Iran will resume all previously curtailed programs and will not pay attention to any proposals from the “partners”.

At the same time, the States made new efforts to expose Iran as an “evil empire”. Quite unexpectedly, star-striped ears showed themselves in this direction in Ukraine. Nobody misheard ... It was in Ukraine. We are talking about a very strange episode, when, against the background of protests in Iran, employees of the SBU counterintelligence department detained two Iranian diplomats at the exit of one of Kiev’s cafes. Both detainees were representatives of the Iranian embassy in Ukraine and had appropriate diplomatic immunity.
About the arrest of diplomats, carried out in a very tough form by armed officers of the SBU, said Ukrainian journalist Maria Dubrovskaya on the website "Correspondent". 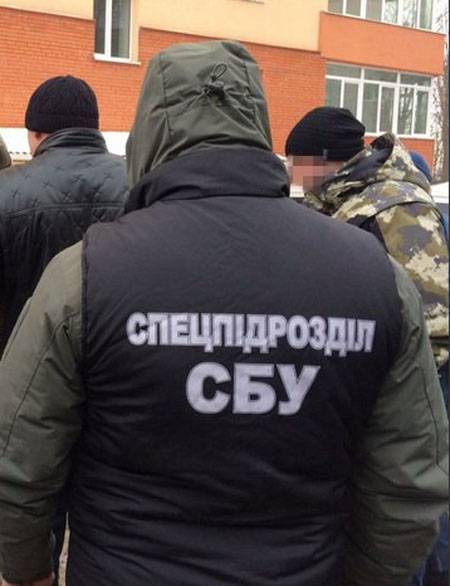 The article was told that the staff of the diplomatic mission were handcuffed, after which they were taken to the building of the SBU, where they confiscated personal belongings, including means of communication. An Iranian consul was summoned to the SBU, to whom representatives of the Ukrainian special services working "on behalf and on behalf of" the Central Intelligence Agency of the USA, announced the discovery of diplomats in the car of allegedly parts related to military equipment. It was also announced that these parts are prohibited for export from the territory of Ukraine.

The highlight is that these “forbidden to export parts” to Iranian diplomats were previously handed over by an employee of the Ukrainian (read - American) special services in Kiev. The SBU called this operation “controlled supply,” which, in fact, was a blatant provocation.

It is noteworthy that earlier the "esbeushniki" announced the prevention of the export through Kiev airport of components of the Fagot ATGM to the Islamic Republic of Iran. At the same time, in the Ukrainian media it was noted that in this case the components for armament turned out to be among Iranian diplomats with the help of the same “controlled supply” by the Ukrainian special services.

As a result, Iranian diplomats were announced by scouts who wanted information about "Ukrainian weapons." Apparently, the provocation should have resulted in something even more ambitious, including statements about the “controlled transfer” of parts, such as missiles. For what? Yes, all for the same - Iran, they say, crosses the red line and is actively developing "rocket technology", and also trying to circumvent weapons embargo. And that means sanctions, means a way out of the deal.

Well, and then - all by the typical American thumb: against the background of the protests, declare that now there is definitely “evidence of Tehran’s militaristic plans in the Middle East” with all that it implies. A little more and, it seems, will ripen to the next version of the “Powell Test Tube”, in order to once again legitimize attempts to influence the political processes taking place in another country, if not by force, then by means of a disinformation-provocative way.

Ctrl Enter
Noticed oshЫbku Highlight text and press. Ctrl + Enter
We are
Separatism in Iran. Will the country's unity destroy internal conflicts?Situational analysis of the death of the MH17 flight (Malaysian Boeing 777), made on the basis of engineering analysis from 15.08.2014
Military Reviewin Yandex News
Military Reviewin Google News
11 comments
Information
Dear reader, to leave comments on the publication, you must sign in.