One belt. One way. And one chairman

March 13 2018
19
Xi Jinping may be the lifelong party chairman of the PRC. Similar happened in stories. For example, in the Soviet. Brezhnev ruled for life, and after his death, the "stagnant" country collapsed in a few years. In the US, they could not believe their eyes - so quickly the “evil empire” cracked at the seams and dispersed, ran away. Does a similar sad fate threaten China? No, it does not threaten. 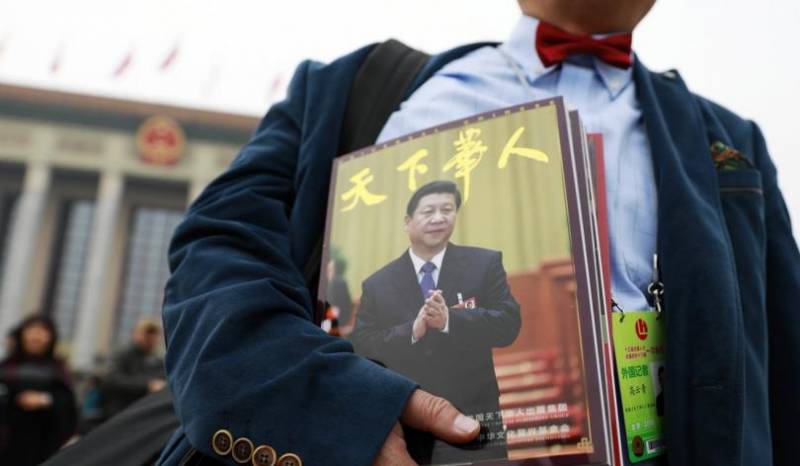 The last step to the life rule of Xi Jinping was left behind. As we told on "Military Review", for a change in the Chinese constitution voted 2958 people. Only two comrades were against, three more abstained.

The abolition of constitutional restrictions should ideally serve to ensure the authority of not only Comrade Xi, but also of the entire leadership of the Central Committee of the Chinese Communist Party (CCP). It must be assumed that a change in the constitution is intended to strengthen the governance system in the country and emphasize the single vector of development of the PRC. This is quite obvious: the Chinese economy is developing very fast and technologically advanced, and it is quite difficult not to notice this fact.

Along with this there is a strong personality cult. The real power in the country has long been lost by a person who is formally considered the second in the ruling party: State Council Premier Li Keqiang. The Premier of the State Council in the People's Republic of China is, in fact, the head of the Chinese government. But in reality now it is nothing more than a shadow of a manager.

Opponents of the new, “unlimited” Xi have already discerned ahead a return to violence, to the era of Comrade Mao. In addition, many Chinese people do not like the non-stop propaganda machine: almost every day, state-run television plays movies where people express delight in the actions of their chairman.

Ideas were added to the Chinese constitution, for example, Deng Xiaoping, but without specifying a name. Now there may appear a name.

“This is a very important step, since the Chinese constitution is a thing unshakable, and, most importantly, only ideas of Deng Xiaoping and some formulations of Jiang Zemin and Hu Jintao were added to it before, without including their names,” he said in an interview "RT" Alexey Maslov, Head of the HSE School of Oriental Studies. - That is, for the first time since the days of Deng Xiaoping, the new name will be spelled out in the constitution. There is a fixation of Xi Jinping in history. ”

So, the "constitutional" C will rise not only on the same level with the rulers of the past, but also higher. Ideas C will have to be studied by schoolchildren, students and party members. Last year it became clear that Comrade C's “Thoughts” would go to universities.

In the fall of 2017, two Chinese university faculties announced that they would devote themselves to the “chairman’s philosophy”. In addition, the ideas of “study groups” began to move throughout the country. The group participants initially included themselves as “followers of the new era” of Xi Jinping.

«The Guardian» referring to the "Beijing Daily" reported that the leading scientists were instructed to investigate the work "The Thoughts of Xi Jinping about Chinese Socialism in the New Era". A representative from a university believes that "the idea of ​​Xi Jinping ... is of epochal significance."

There is, however, a different opinion. Opponents Xi believe that “peaceful and educated citizens of China” may resist even more ideology in their “classrooms”. The reluctance to put up with the dominance of ideology can become a barometer of attitudes towards the ruling regime. Will, for example, parents of middle-class children be happy that their children will have to learn the “latest version of Chinese Marxism”? And if the current party elite pursues the goal of building a totalitarian society, then society can reject such an idea. Now is the 21st century, and we need to look forward, not into the past, says Susan Shirk, an expert on the politics of the PRC.

The “thoughts” of Comrade Xi, we add, were included by the XIX Congress of the Communist Party of China (October 2017) in the party statutes. The congress itself began with the speech of Comrade. C, which was delayed, like Gorbachev, for three hours. Let us explain to those who do not know how long Gorbachev spoke: for the sake of his speeches, broadcast on the “Time” program in 1980's, this TV program could stretch to infinity, and the programs after it were postponed “later”.

From now on, when Xi can consider himself a life ruler, when his work began to be studied at universities, arguing with him in China, perhaps, is meaningless. At least, this means opposing the statute and authority of the CCP, which in China is unlikely to lead to a good outcome for an opponent.

On the other hand, not all Western experts believe that China under Comrade X has slipped or is slipping into an unequivocal autocracy, not to mention totalitarianism.

Director of the Institute for Chinese Studies at Kings College, K. Brown, for example, does not consider that there is autocracy in China now. Perhaps this is the “intention” of autocracy, but no more than that.

“What is happening now, many will call autocratic rule. But I cannot say that this is an autocracy, I would say that this is more an intention, and until 2023, we will not know for sure what this intention is, much can change, the expert said BFM.ru. - And while everything is going well, Xi Jinping can hold on to his position. But if difficult times come, people will ask: you said that you have all the answers, can you answer us now? But at the moment, Xi is certainly a consolidating force in China. The main goal of China is to become a powerful, strong country. The Chinese want a good status. And Xi Jinping as a conductor of this idea is very popular. Here he can be calm ... "

Yes, and hardly the Chinese, beginning with the party members, are rushing back to the Mao era.

“Only in order to emphasize the ambitious character of Xi Jinping’s personality and the authority he has already won, you can compare him with Mao,” "BBC" opinion of the Deputy Director of the Institute of Asian and African countries Andrei Karneev. - And so it is a completely different era, different people. And no one in China, including the entire top of the CCP, dreams of going back to the past. ”

Finally, Comrade C set a vivid example of how to fight corruption at the state and party levels. And here he is really popular.

As recalled "BBC B" Art. Vasily Kashin, a researcher at the Institute of Far Eastern Studies of the Russian Academy of Sciences; during the five years of C's rule, one million three hundred thousand people passed through the central commission for discipline inspection. Yes, most of them got off with penalties on the party line: from reprimand to dismissal from work. However, 10-15% of the defendants of the cases still went to jail.

The fight against corruption, which raised C, is in full swing in China. And this is to some extent a role model. Somewhere abroad, we note, could take an example.

Not all Chinese comrades are very happy to fight corruption. Not welcome to those whom the fighters gave a hand, and their relatives. However, just such a struggle, even if it is conducted “authoritarianly”, that is, uncompromisingly and on behalf of the top of the party, means not in a mythical bright future, as in the USSR, but in the real present consolidation of the party and, accordingly, the government.

Which of the well-known ranks received in the PRC in the neck in recent years?

The most notorious case was, perhaps, with respect to Bo Xilai. This is a careerist, former secretary of the CPC Committee in Chongqing. In 2013, he was sentenced to life imprisonment. He was accused of corruption, bribery and abuse of official authority. The sum of his "left" income was 4,3 million dollars. Previously, this party member was considered one of the most promising Chinese politicians.

Less than two years passed, and another high-profile case was “stitched”. In the summer of 2015, people in the People's Republic of China sentenced Zhou Yongkang, a former member of the Politburo Central Committee Politburo, to life imprisonment. The court found this party member guilty of abuse of office, bribery, and even the deliberate disclosure of state secrets. The process itself was closed due to secrecy. But it is known that Comrade. Zhou and his relatives bribed 130 million Yuan, or, at the then exchange rate, 21,3 million dollars. The relatives promoted the distribution of state contracts to bypass the law and caused such actions to damage the Chinese budget of 1,49 billion yuan, or 240,5 million dollars.

Both of these persons were not only corrupt officials, but also represented a force capable of creating Xi Jinping party opposition. At the time of the struggle for power and for the consolidation of power, the suppression of such opponents is a rather typical action. On the other hand, the fight against corruption in the PRC does not at all serve as a screen for eliminating critics of the regime. And the punishments and dismissals from the grain posts of many of those who were guilty there are very real, not connected with “transfer to another job”. Therefore, the C program, which is hardly in the interests of obscure party clans, finds a response among the people and consolidates both society and the party.

The party, after all, is communist. With bright ideals. Hence, perhaps, the bright thoughts of the Chinese leader.

In fact, Xi Jinping has become a true symbol of the new Chinese era. This is bad or good, but he cannot avoid the personality cult. Will you be able to overcome the temptation of the cult? If China continues to develop rapidly, turning into a powerful technological power before the eyes of the whole world, then a little cult to Comrade Xi, perhaps, will not hurt. The idea of ​​the Chinese “belt and way” was voiced by them. And under his leadership, she comes to life. Not by promises, but by deeds.