How to get to the “Peacemaker” instead of the Crimea

March 12 2018
80
Opponents of the Ukrainian Maidan and the regime that came on its wave have been trying for four years to find the bottom to which Ukraine has fallen, but every time they “knock from the bottom”. But there is a current Ukrainian government and fans in the face of Russian liberals. It was to them that Kiev presented a good lesson: if you strongly advocate for the interests of Ukraine, you can get ... to the infamous site “Peacemaker” - alongside the active “Colorado” and “quilted jackets”. Is not it insulting the soul of the liberal? 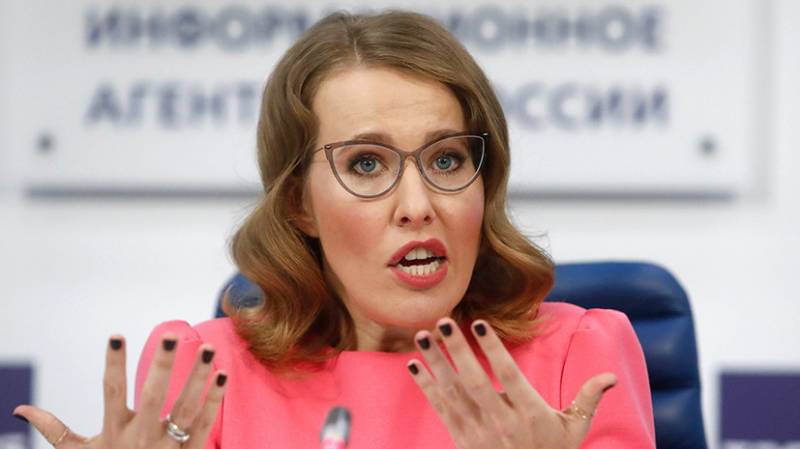 Among the candidates for the presidency of Russia, there are those who are in favor of tearing away from the country an important part of the territory along with the residents, the Crimea. Earth, reunited not only with great difficulty, but also with extraordinary joy both for Crimeans and for most people from the mainland. It is difficult to say what such candidates are counting on, but still they have their own circle of supporters.

One of these candidates is Ksenia Sobchak, a TV presenter known for her scandalousness. Either she wanted to please the liberal part of society, or official Kiev, but went beyond banal liberal fairy tales about the status of the Crimea (Yavlinsky also likes to tell them). Ksyusha decided to be consistent and principled: to ask Ukraine for permission to visit the Crimea, since she considers the peninsula to be Ukrainian territory. Submitted to the Ukrainian embassy a corresponding appeal. What I said on the air of Ekho Moskvy: “If I go to the Crimea, then only through Ukraine. If I get permission for this entry, I will go there. ”

It would seem that Ukraine had a good chance to support “its own” person in “enemy” Russia, who would like to resolve the Crimean question in favor of Kiev. But ... Instead, the Ukrainian government once again demonstrated the depth of its fall. Ukrainian Foreign Minister Pavel Klimkin did not appreciate the emotional outburst of violent Xenia. He called this rush "political schizophrenia."

And here is the reaction of Sobchak herself to the words of Klimkin:

“He refused my request, accusing me of political schizophrenia. I really do not want to respond to the highest official of a sovereign state in the spirit of “such a one”, but think about it: the Ukrainian authorities prevented the only Russian politician who supported their national sovereignty. Which of us has schizophrenia? ”

Indeed, there is reason to wonder. Oh, how I tried to please, but I was so embarrassed!

Only the label of “political schizophrenic” is not the only consequence of this demarche for Sobchak herself. As a result, instead of the Crimea, she went straight to the Peacemaker website. It happened after it turned out: Sobchak had previously visited the peninsula. And this happened after the annexation of the Crimea to Russia - in April 2014 of the year. And then the permission of Kiev did not ask.

"Mitigating circumstances" such as liberal views, support for Maidan, the position on the return of the Crimea to Ukraine "do not roll." The creators of the "Peacemaker" do not know forgiveness and make no exceptions. So, if a criminal case is brought against Sobchak for appeals to secession of a part of Russian territory, then it will be more difficult to ask for political asylum in Ukraine.

And, in fact, to whom exactly did Ksenia want to curry favor? Before the liberal electorate? Yes, how many of him there, of the electorate! Before the Maidan authorities of Ukraine? Well, I got it. Or, in front of those who are behind the Maidan authorities of Ukraine? This is most likely. Only here the other day, US State Department Special Representative Kurt Volker made a proposal to impose personal sanctions for visiting the Crimea. So theoretically, now a supporter of the return of the Crimea to Ukraine may even fall under these sanctions.

Sobchak is not the only one whose illusions were destroyed by the Peacemaker website. Even actress Liya Akhedzhakova, who constantly repented and asked Ukraine for forgiveness, was disappointed after her friend, actress Alisa Freindlich (together with several other artists) got to the Peacemaker. And not only on the “Peacemaker”, but also blacklisted by the Ukrainian Ministry of Culture. Akhedzhakova called the Ukrainian authorities "fools" and "idiots." True, the problem arises, who can be called those who all these years supported the Maidan junta and apologized to her on every occasion and for no reason. Well, okay, we omit this question.

The fact is that Sobchak and other Russian liberals are faced with exactly what we have been talking about for four years. In Ukraine, the Democrats came to power. In Ukraine, neo-fascists came to power. Only she is hardly fully aware of this, as, incidentally, other fans of all kinds of Maidan. And if they understand, they will try not to show it as well: how, such a myth is destroyed!