"Companion" through the eyes of the enemy

March 12 2018
40
Most recently, the Kalashnikov concern published the results of winter testing of a whole range of new products, including two combat robots: the Companion and the Freeloader, at one of the testing grounds near Moscow.


The tests, of course, ended successfully (it is difficult, by the way, to recall that some time it was reported about unsuccessful trials), and it was reported that new combat robots could operate in winter conditions and interact with infantrymen in the storming of buildings. 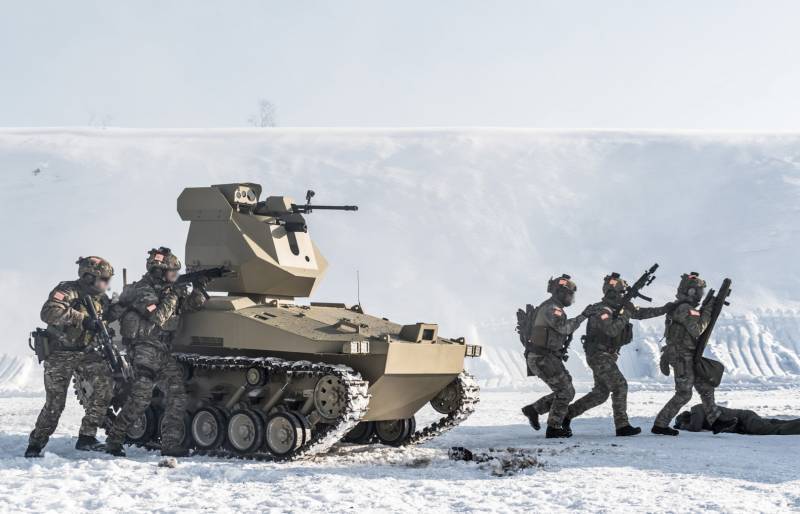 The development of combat robotics in Russia is of great interest to me. It is obvious that a large horde of robots will sweep away any enemy on the battlefield. Autonomous war drums, in my opinion, will open a new page and in stories weapons, and in the history of wars, because such machines will completely change the nature of the battle and war in general. However, so far in Russia, not a single sample or prototype has been created, which could be called an autonomous combat strike machine without the slightest exaggeration.

Well, okay. The Kalashnikov Concern, as well as other developers and manufacturers of combat robots in Russia, make their products on the basis of a well-defined concept of combat use of robots. Apparently, the ideas of "marching to the last sea" of lava automatic combat vehicles, they are not addicted. Therefore, to evaluate their products from the point of view of other concepts of the use of combat robots, by and large, it is meaningless.

You can consider the same UAS-01G BM "Companion" in terms of the concept in which it is developed. This is a machine of direct infantry fire support in the assault, sweep, various special operations - a kind of mobile and shooting armor for infantry or special forces, as can be seen in the photo from the tests.

Since some personal experience speaks for the fact that domestic concerns are not at all susceptible to criticizing their products, neither friendly nor constructive, then, I think, you can resort to setting up such an intellectual experiment: look at the “Companion” through the eyes of the enemy. What to do, how to fend off this miracle of modern military technology? Moreover, this experiment is close to the real situation, since the adversary will have to develop methods of counteraction, having the minimum information about the new technology, well, approximately, like us, the most brief description and a few photos.

Concern "Kalashnikov" may think anything, but the enemy will undoubtedly carry out such work and try to determine even before the first battle, where the "Companion" has vulnerabilities, which can be taken from the available arsenal and how. If the critics can still be brushed aside or kept silent in words, then the enemy will undoubtedly confirm the correctness of his conclusions by destroying this battle robot on the battlefield.

The first thing that catches your eye is that the “Companion” is a large and very noticeable car on the battlefield. In its modification, which was tested in winter conditions (with a tower for AG-17A and PKTM, as well as for an optical unit), the height is more than two meters, which can be clearly seen by how much the tower towers over the infantrymen. If we take the average height of the infantry in 170 cm, then the total height of the vehicle will be about 2,3 meters. Approximately, as at T-90.

From this it follows that a car with such dimensions in height will be very difficult to disguise and on the battlefield it will most likely be well distinguishable. Even in the case when the combat robot will be used as a passive firing point (this possibility is provided), then digging the machine will take time and effort, and still the tower will rise above the position, unmasking it.
Why not make the combat robot as flat as possible, and install the armament on a rising bracket? Flat, with a small height (about a meter or a little more than that), the car will give in to camouflage is incomparably better than this armor-mounted monster. Good disguise and sudden fire is half the battle success.

The second conclusion from the general view of the car - it is most likely armored. What does it follow from? Firstly, the overall dimensions of the machine are not so large: the length is approximately 2,5 meters, the width is 2 m, the height of the body (without a tower) is about 1 meter. Secondly, the main part of the zabronevogo volume takes the engine. Most likely, this is something common, for example, diesel UTD-20С from BMP-2. Its dimensions allow you to squeeze a diesel engine into such a body (length - 79 cm, width - 115 cm, height 74 cm). A part of the hull is also occupied by a transmission, and in the fenders there must be fuel tanks. Machine weight about 7 tons. The engine with the transmission is about a ton, the tracks are about 500 kg each, together with wheels and tracks with suspension in the amount of about one and a half tons. Well and still the tower will pull on 500-600 kg. Total, the body accounts for about four tons of weight. Approximately we will calculate the booking area (it turned out approximately 15,5 square meters), and we will define how much weight falls on this square meter. Counting gives 258 kg steel per square. meter. If you look at the table of steel-rolling standards, then this weight is per square meter. The steel sheet meter corresponds to the thickness 33 mm.

Taking into account all the blots and errors of such an approximate calculation, it can be assumed that the Companion has a booking thickness of not less than 30 mm, and its frontal projections of the hull should definitely have such a reservation.

From the overall assessment of the combat robot, it is obvious that weapon no good. More chances for large-caliber machine guns. From the DShK, you can try the BS 12,7 chuck from a distance of approximately 400-500 meters to pierce the front of the case, it can work out, although without a special guarantee. But if the breakthrough is reached, then the diesel will most likely be hit and the combat robot will be immobilized.

Despite the fact that the DShK and other large-caliber machine guns most likely will not be able to take the “Companion” in the front of the hull, this does not mean that they are useless. On the contrary, even a large-caliber machine gun is most likely to hit the robot in the board, and especially the tower, which is unlikely to have thick armor. Since the hull is most likely occupied by diesel, the mechanism and electric motors for turning the turret are clearly located in its lower part.

Total, fire from a large-caliber machine gun can hit: board the car above the tracks (engine damage), fender shelves (damage to fuel tanks), lower part of the tower (defeat of the mechanism of rotation of the tower), as well as the upper part of the tower (defeat of the optical unit and guidance mechanisms) . In practice, it turns out that a long queue from an ASC or something like that in the middle of a side projection is likely to lead to the exit of a combat robot. 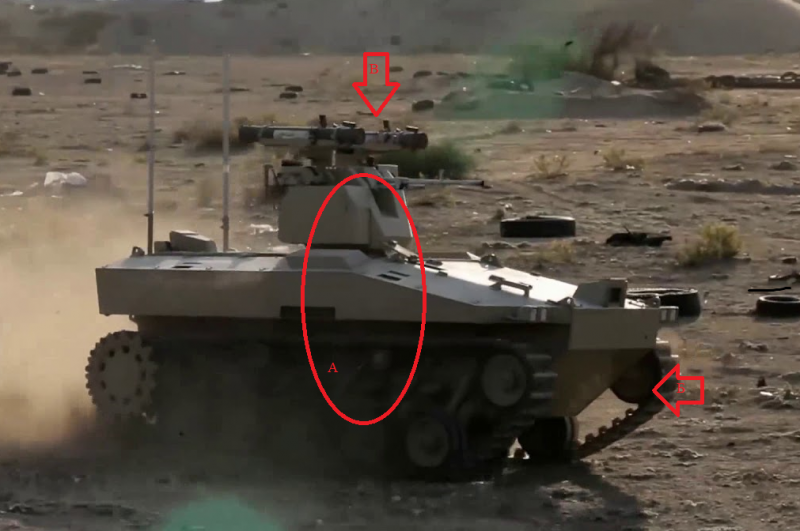 The most vulnerable places of the BM "Companion": A - the most advantageous area of ​​fire from a large-caliber machine gun, B - unprotected guide wheel suspension, C - tower, vulnerable to being hit by hand grenades (in the photo is another modification of a combat robot, without protective shields on the tower)

Grenade launchers of different types, starting with the RPG-7, of course, will hit the combat robot, that in the forehead, that in the board. Their armor penetration is enough for a confident defeat. Hitting a cumulative grenade approximately in the center of the frontal or side projection will undoubtedly lead to the destruction of the combat vehicle.

Since the combat robot, judging by its tests, is supposed to be used as a mobile shield for infantry (which, in general, corresponds to the usual practice of using armored vehicles in urban combat), it is more expedient to bombard the combat robot with several shots or a volley of rocket launchers when detected. This will destroy or damage the robot, and disperse the infantry hiding behind it.
The defeat of a combat robot with mines and grenades can most likely be expected in a city battle. Hand grenades, such as the F-1, may well be used against a combat robot if there is a possibility of approaching the throw distance. The most vulnerable part of the Companion, which can be hit with hand grenades, is the tower and the equipment located in it. If you throw a few grenades, aiming so that the grenade hits the top of the tower or explodes above it, you can beat the optics and damage the weapons pointing mechanisms. The shards will also disperse the infantry hiding behind it.
For close combat, it is necessary to note one more vulnerability of a combat robot - an unprotected guide wheel suspension assembly, which is perfectly visible on any photograph of a combat robot. This is a design defect, clearly the result of saving and reducing the weight of the machine. A comparatively weak explosion in front of a combat robot, including a hand grenade or anti-personnel mine, is enough to knock down this steering wheel or at least damage it, which will lead to immobilization of the vehicle. A sheet of the bottom of the frontal part of the body will protrude in the explosion with a screen that will send a shock wave to these unprotected guide wheels. 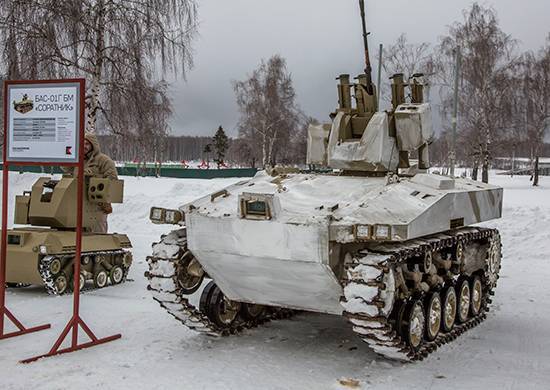 This photo clearly shows how vulnerable the steering wheel of the combat robot track is.

A very good tool against such a combat robot, especially in terms of tactics demonstrated at the test site, will be a mortar. Mortar shelling must cut off infantry from a combat robot, so that later it can be shot from grenade launchers or a large-caliber machine gun. If the mortar crew and the gunner are good, then you can try to achieve a direct hit in the tower. It seems that hit 82-mm mines in the tower "Companion" will be enough for the robot to lose its combat value.
The conclusion from this consideration of the combat robot "Companion" from the point of view of the enemy turns out to be quite interesting. All that is said above is a consequence of a visual introduction to the machine, literally from several photographs and openly published reference data. Any infantry unit that is armed with anti-tank grenade launchers, large-caliber machine guns or mortars, not to mention something more serious, will quite easily break off this combat robot. A rather expensive and complicated machine is a serious danger only for those who are armed only with small arms (but even then, in battle, there may be an opportunity to successfully throw a grenade).

So, it is permissible to believe that such a fighting robot will not frighten any organized and armed enemy, and means and methods of counteraction will be quickly found against it. Anything can be developed and tested, but the “Ally” and similar combat robots are unlikely to become so effective as to bring a revolution in the conduct of hostilities.