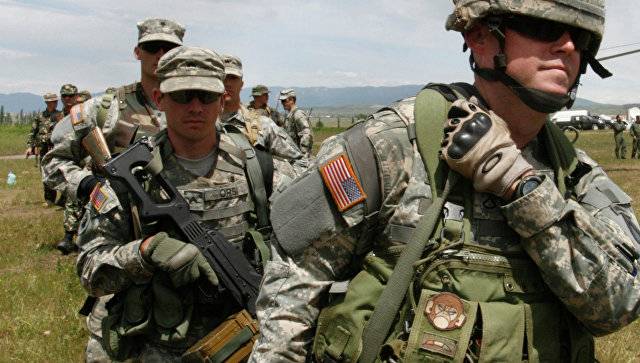 Totalitarian propaganda is capable of tearing the mass consciousness from earthly rock no worse than a carrier rocket to carry off into a vast distance a spacecraft. A typical case of such a flying state of mind is now demonstrated by Ukrainian society. And not even that part of him, with which everything has been clear for a long time, due to her complete lack of brains. But those who are struggling with all their might in this madhouse to maintain at least minimal adequacy and sobriety.

However, it turns out they have, every time, everything is worse. The endless drumbeat of endless Ukrainian “Peremog”, in the style of “Let's buy gas in Europe even more expensive than coal in America!”, Will ultimately drive even the most cold-blooded intellectual.

Another paroxysm of withering the brain of Ukrainian delight was the enrollment of Ukraine into the so-called "NATO graduate students." The utter nonsense and meaninglessness of this “event”, in full accordance with the inverted logic of this theater of the absurd, is presented by the local propaganda as “well, just the final Peremoga, which cannot be anything more than that !!!”.

People who listen to this media nonsense from morning till night, who see and hear the same thing from their fools neighbors, who repeat television spells with foolish little smiles, like “Well, now we’re trying to make sure of this klyatskim Muscovites!” , drift towards this collective insanity. Moreover, it is not very safe to be sober-minded white crow in today's Ukraine.

These days from my seemingly perfectly sane Odessa interlocutors come news, clearly talking about the "creepy waves," reigning in other local heads. Here it is, for example:

“Finish the game. The NATO bases in Ukraine, covered by a treaty of assistance with NATO, are much worse than the current situation. Now it is possible to resolve the issue with military force without consequences, although, of course, the media will explode and the overall situation will worsen - up to exclusion from the UN. And then the military solution to the issue will be difficult. ... And they plan it approximately to the end of Putin's last term. Even Georgia in the company - the environment is obvious. The situation is no better than the end of 1942 year. "

In general, almost like a classic: “Chef! Everything is lost! Gypsum is removed. The client is leaving! Aaaaaa !!! ”Especially in the topic - about“ Georgia in the campaign ”that surrounds Russia ... And then Poroshenko throws the“ ember ”about the fact that Russia will soon collapse and all its property abroad arrested in payment of debts of Gazprom.

And what would you say to think typical Odessa citizen when around such a "Thunder of victory, be heard!". And his attempts to gain optimism on the Russian Internet end, as a rule, with the reading of the next local whining on the topic of “Putin-unified”, or the exposure of some “authoritative expert” who knows for sure that in Russia all are cardboard missiles. In short, the full “Guard!”, Russia will soon have a skull and hope for nothing more.

Therefore, especially for my Odessa acquaintances and not only for them, I want to clarify something. Perhaps, it will somehow help them to pick up with higher brain activity and look at the world with an eye that is not covered with Kiev propaganda.

Firstly, about the fears about the alliance of Ukraine and NATO. I advise everyone on this subject to completely calm down. Ukraine, de jure, will never be in NATO. In the sense - absolutely never. Because she has completely different tasks, which do not imply such transcendental happiness. There is no need for an artillery projectile designed to explode in an enemy trench, to give guarantees of its own safety. And, moreover, no one would cling to this projectile with the engine to explode with it.

As for the situation of the DE-FACTO, it is also possible not to worry too much - Ukraine has long been in NATO. And therefore, I advise those who are very concerned about this “perspective” to relax. Everything has already happened. American troops and military bases are already in Ukraine. And there are a long time. These are just the unthinking kids in some local editorial offices who recently opened their eyes with the help of some Swiss newspaper that the US military, it is frightening to think (!), Settled at the test site in the Lviv region.
The author of these lines wrote about it and, as they say, he sounded all the bells and two or even three years ago. For example, September 1 2016:

“Recall that today there is a presence of military personnel, at least three of the American ground forces formations:
- 173 Airborne Brigade
- 2 Infantry Brigade 3 Infantry Division US Army
- 4 Motorcycle Division, USA
At the same time, it cannot be completely ruled out, but rather it is even logical to assume that the United States Armed Forces in the given territory and other, as yet unidentified, combat, staff and rear units. Thus, it turns out that the US military presence in Ukraine is no longer limited to a single combat brigade. And maybe not limited to two or three. They just prefer not to talk about it. " »Http://antifashist.com/item/karpatskij-forpost-ameriki.html#ixzz59SkEeJzF

But alas, there is no prophet in his homeland! We always need some kind of Switzerland to enlighten us, about what is happening under our nose.

So Ukraine has long been turned into an American military training ground, where army brigades of US ground forces, as part of regular rotation, systematically and comprehensively study and master the Ukrainian theater of military operations under the beautiful sign of training local militants.

Base points for US troops are being hastily built throughout Ukraine. In the Black Sea Ochakovo, an “engineering center for naval operations” is being built at an accelerated pace by the American engineering unit. American intelligence and transport aviation they feel at home at the military airfields of southern Ukraine, in particular in Odessa and Nikolaev. Especially for strategic transfers in the interests of the United States, the Ukrainian Ministry of Defense decided to re-open a military airfield in Artsyz (Odessa region), capable of receiving the heaviest aircraft. 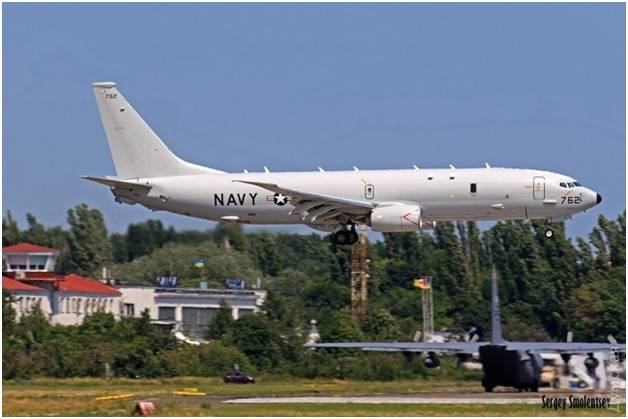 In order to ensure the secrecy of such transfers, special events have been held in Ukraine more than once with the aim of completely closing the largest civilian airports to receive aircraft of the US Air Force transport command.

But this is only the visible part of the iceberg of the full-scale involvement of Ukraine in the military structures of the West, which has long been a fact. Ukraine has been conducting military exercises only with NATO troops for many years and fully adapts its army to NATO standards. The whole process of training and combat training of future Ukrainian officers is under the complete control of American military instructors. 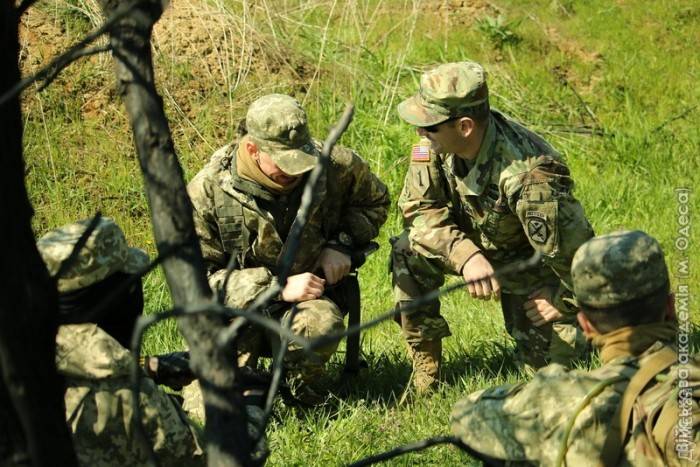 "American Observer" from the 10-th Mountain Infantry Division of the US Army at the exercises of intelligence cadets of the Odessa Military Academy (April .2017)


Americans completely control the special services of this pseudo-country, including military intelligence. The one that chose the sword stuck into the map of Russia as its emblem. And in fact they rule these “offices” in their own interests. It is from the Ukrainian territory that the most active espionage and sabotage activity against the Russian Federation is being conducted.

Under the auspices of the United States, divisions of cybernetic operations are deployed on the territory of Ukraine, which are provided with all the necessary personnel, technical equipment and financial resources to conduct a full-scale electronic war against Russia. Most psychological special operations, the object of which becomes the population of the Russian Federation, are also defined as outgoing from the territory of Ukraine. And this is despite the fact that two years ago in this country there was neither the strength nor the means to conduct such aggressive actions. It is quite obvious that this direction is supervised by Western experts.

In the leadership of the Ukrainian armed forces and the local defense industry sit American emissaries, defining the nature and main tasks of the Ukrainian military construction. It is clear that they “optimize” this activity exclusively against the Russian Federation. And so on in the same vein.

Thus, the current "weeping of Yaroslavna" on the part of some particularly nervous citizens about, they say, threatening Ukraine of membership in NATO, was late for a very decent number of years. Ukraine, through the efforts of its anti-Russian rulers, who see America as the only guarantee of their comfortable existence, has long been turned into a full-fledged military bridgehead of the West. The main feature of which is the large-scale use of the native infantry, saving the West, at least for the time being, from the need to deploy its own large garrisons here.

As for the so-called “threat of war against Russia”, which, they say, requires an urgent response from her side, because, as they write to me from Odessa, “the situation is no better than at the end of 1942 of the year”, then again I have to inform such alarmists that they are a little under-held with their assessments. There is no "threat of war" anymore! BECAUSE IT ALREADY GOES FULL!

Historical the enemy of Russian civilization, having conquered Ukraine, crossed the Rubicon a long time ago and crossed all conceivable "red lines" beyond which there is no turning back. And the fact that battles like the Kursk Bulge and atomic warheads are not rumbling right now, this, in fact, does not change anything. Because, in principle, it is wrong to focus on what used to be. Each new war has its own specifics and its own set of tools. You should not only doubt that they have already been launched. Including Russia. And they are applied in the quantity and quality that a specific military-political situation requires. The war is different from the banal cabaret fight. that its participants do not wave their fists, smearing bloody snot on their cheeks, but use forces and means in accordance with an accurate calculation and goals outlined at this stage.

But about the fact that this is a war that has already begun, it is better to immediately drop all doubts. And finish, finally, relax in the hope that everything will somehow manage and be formed. Because "the train has already left."

And one should not be afraid of what mythical Ukraine’s membership in NATO is, because it has long been under the boot of the West. And not the “threat of war” that has already begun. And only in order not to make some kind of nonsense in the course of this struggle, for which you will have to pay a lot with your own blood. So far in this sense, Putin and his brain headquarters, basically, everything seems to be doing right. Taking into account the real situation, and not the phantom philistine illusions on this subject. And God forbid that they also have a sober assessment of the situation, sniper accuracy in making strategic decisions and, of course, military happiness in the future. Which in war is never superfluous.

Ctrl Enter
Noticed oshЫbku Highlight text and press. Ctrl + Enter
We are
Results of the week. “In our cooperative, the board is always agreed”Results of the week. "God forbid to see Russian revolt, senseless and merciless!"
Military Reviewin Yandex News
Military Reviewin Google News
28 comments
Information
Dear reader, to leave comments on the publication, you must sign in.