In the wilds of barbed wire. H.2

March 17 2018
33
We continue to talk about positional defense on the Russian front of the First World War and its elements (see In the wilds of barbed wire. H.1). Its most important element was machine guns.


Machine guns that possessed such significant quality for positional defense (as compared to rifles) as the accuracy of fire were mounted on the most tactically important and threatened positions (on the reverse slopes of heights and directions of the enemy's likely offensive) and flanks (which allowed the crossfire of machine guns). Ideally, they tried to achieve the fire coverage of the attacker.

Machine guns could be impregnated into rifle positions or set up independently (i.e., separately — mainly in platoons; in this case, special machine-gun trenches were constructed). 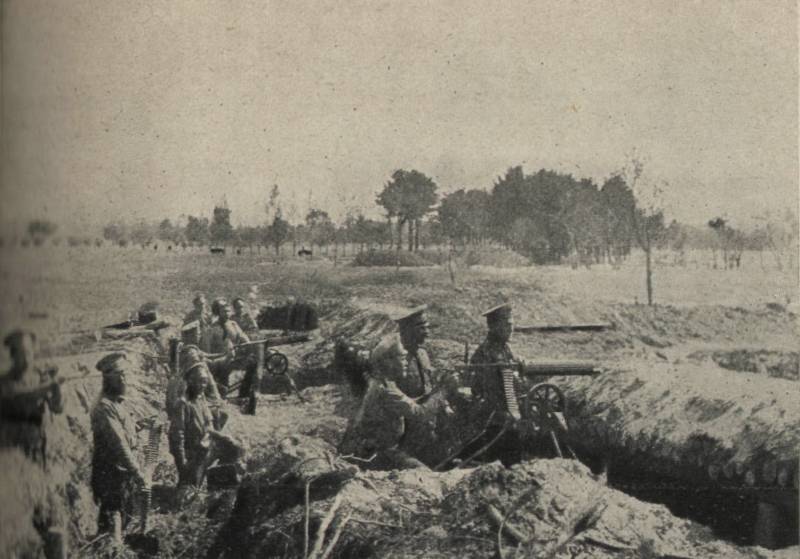 Machine gun company on the position.

Machine guns were recommended to be placed in armored shelters. 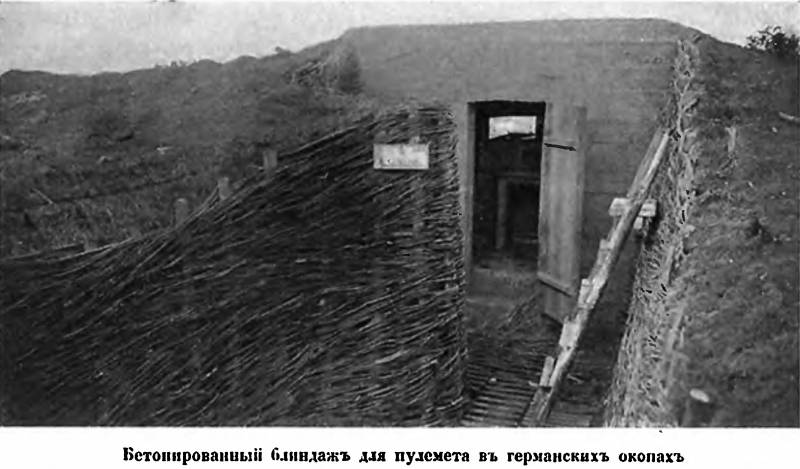 Machine guns that are directly in the line of fire, carefully masked, connecting with the rear positions of the message.

1) For permanently operating machine guns, which were not only to repel enemy attacks, but also to shoot at long distances at emerging individual groups of enemy soldiers and officers, reconnaissance aircraft, etc. to fire with large sectors of fire.

2) For melee machine guns, designed exclusively to repel enemy attacks, flanking approaches to a position, etc. The nest for such a machine gun was to consist of a solid chair that could be fired over the parapet in different directions. Nearby there was a shelter (“foxhole”), in which the crew could take shelter from heavy shells along with the machine gun, as well as ammunition. 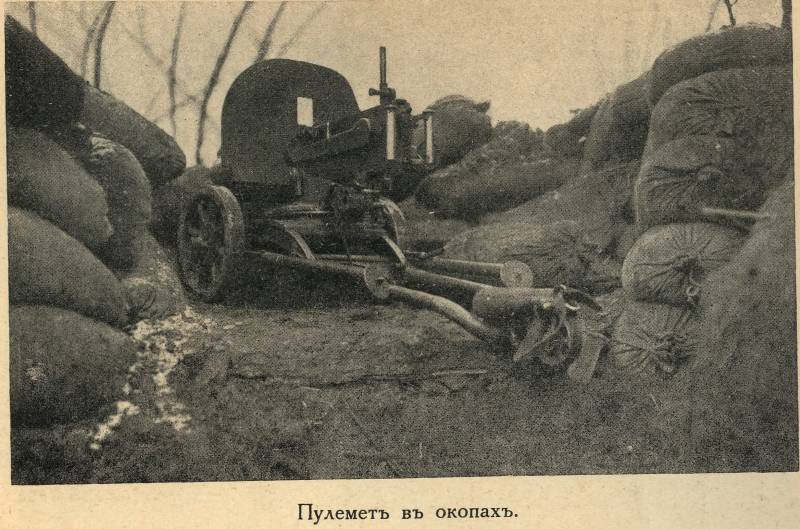 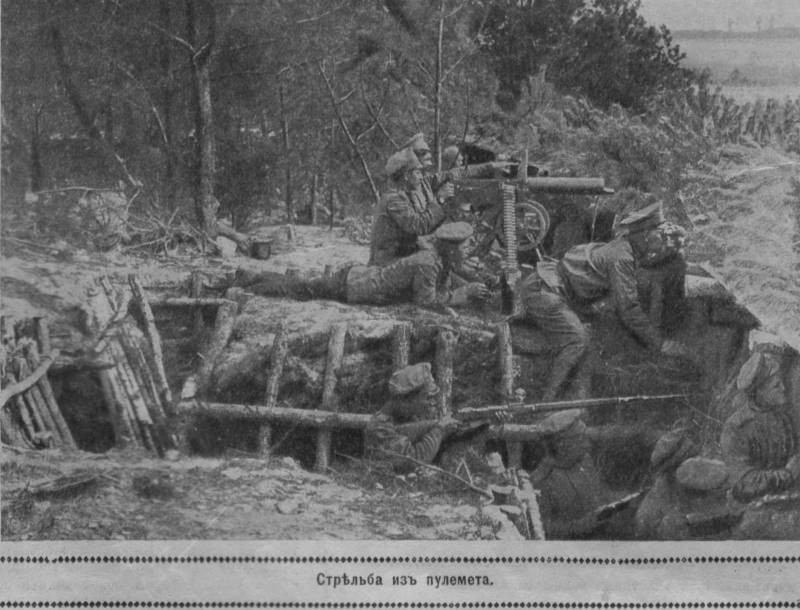 Bombers and mortars were ordered to be placed behind the return slopes of heights and terrain folds, preferably away from the trenches, and change positions for them as often as possible. Bombers and mortars were in special trenches - in 50-ti and more steps behind the rifle positions (so as not to bring on the enemy’s return fire). Mortar and bombing trenches were connected by communications with infantry trenches and with their own shelters. 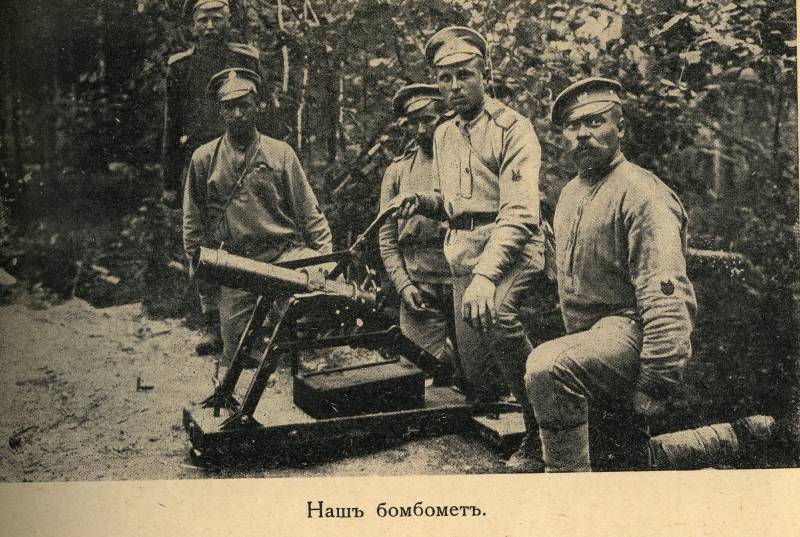 Hand grenades were used in carrying out attacks, to repel enemy scouts, to counteract the destruction of wire barriers, etc. 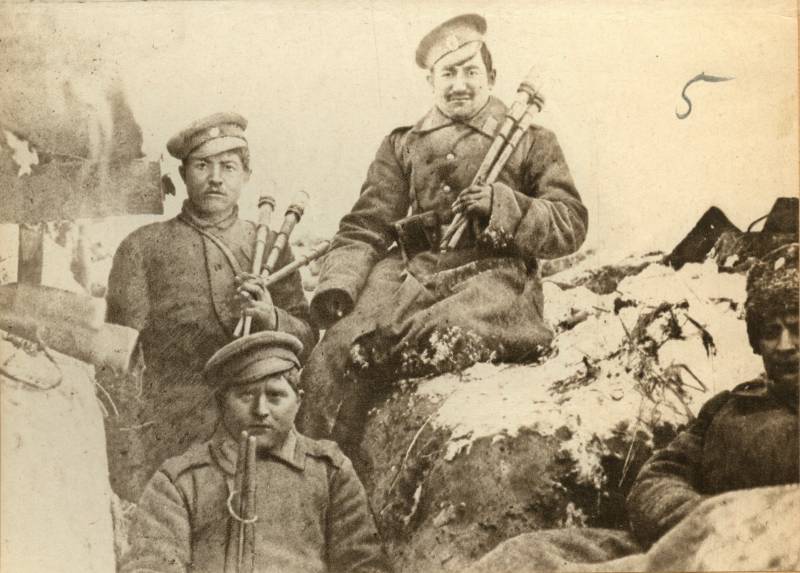 With the beginning of the chemical war, the Russian command began to organize careful observation of the enemy's behavior in order to detect in advance the preparation of a chemical attack. If it was possible to detect the installation of gas cylinders, they opened artillery fire. For the timely warning of the beginning of the gas attack, special observation posts were put forward before the positions - they signaled with signals about the appearance of a gas cloud. At the signal of a chemical alarm, the fighters put on gas masks, made fires and prepared to repel the attack of the enemy. 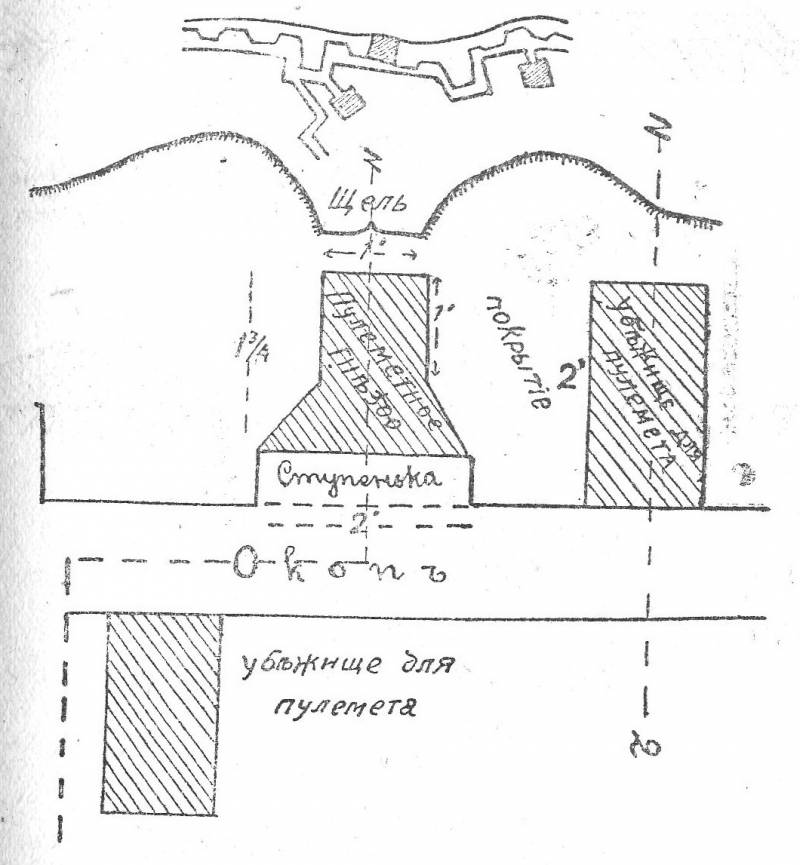 The key place was given to artillery.

Part of the available guns was placed in the battle line, and the other part - was credited to the general reserve. The guns at the positions were placed in special trenches, mainly being in closed positions. Heavy batteries were located at a distance of 3-5, and light batteries - not further 2-x km from the front. Batteries had spare positions.

Sometimes heavy rails were laid on the firing positions of heavy batteries, along which trolleys with ammunition moved.

Increased attention was paid to the issues of massaging artillery fire and ensuring its concentration at the appropriate point - above all the most important approaches to the defended position. Whenever possible, they tried to disperse artillery - guided by the principle: “being together, shoot together”.

Artillery observation posts were built to observe the results of the fire. They could serve and high buildings, trees, hills. 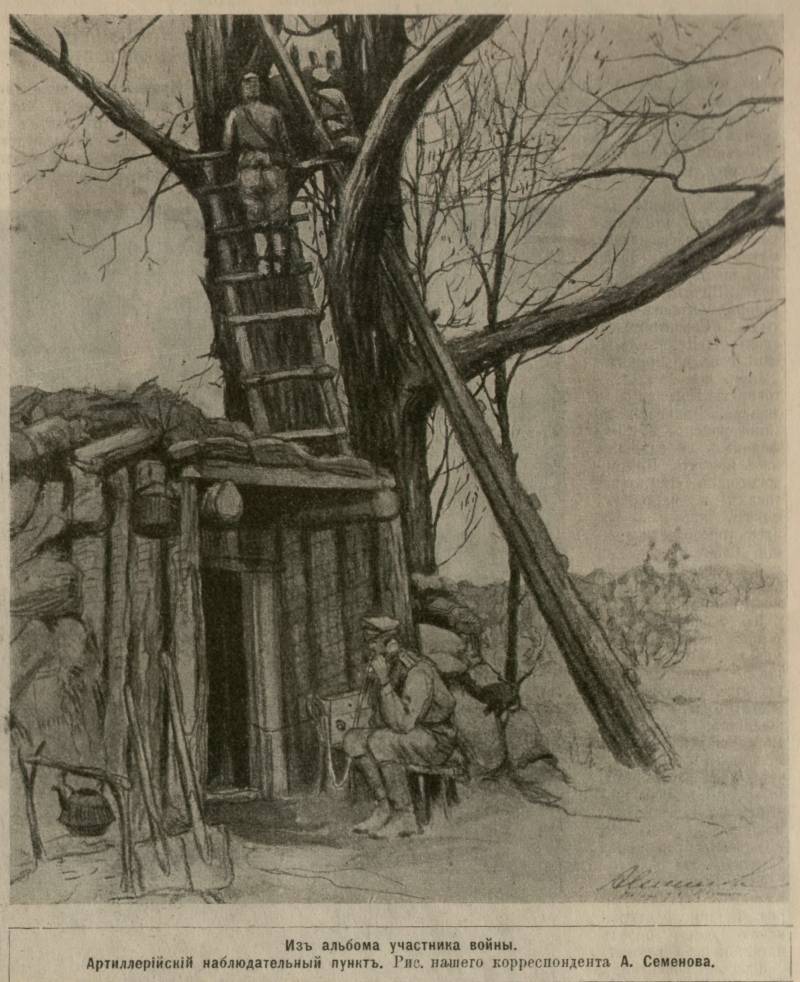 An artillery cover was obligatory assigned to artillery - it defended the guns and assisted the gunners in carrying out heavy work.

Barrage of artillery and machine guns was a key factor in repelling the onslaught of the advancing enemy. Improving the organization of such a fire made it possible to reduce the number of fire units in the warhead and increase reserves. The practice proceeded from the fact that from the moment of calling the fire and before the opening of the barrage artillery firing should take no more than 2 minutes. Artillery densities were considered optimal in frontal shelling — no more than 100 meters per battery, i.e. about 15 meters (width of one gap) per gun. The barrage plan, envisaging a combination of artillery and machine-gun actions, should have provided for the advancement of such fire inside the defensive line in case the enemy broke into it. Without fail, the trenches were also shot, where enemy infantry accumulated before the attack.

The external, qualifying sign of the positionality of hostilities was the presence of so-called artificial obstacles in the battle line and ahead of the fortifications. Such obstacles impeded the advancement of enemy infantry, dismembering its order of battle, and (not least) under heavy fire of the defender. After all, even a slight delay of the advancing infantry under fire led to serious losses.

The main requirements that were imposed on the obstacles were the maximum “invisibility” for enemy artillery observers, intractability and the ability of the system to cover effective fire.

Combat experience has demonstrated that it is impossible to overcome obstacles immediately on the whole front. Well, if they managed to break through in several points. And it was precisely to these passages that the main efforts of the attacker were directed. Accordingly, the most important task of the defender was the preservation of artificial obstacles - through a specially designed system of measures.

Water ditches with a width of at least 4,2 m and depth of 2 m were considered to be the strongest in the series of artificial obstacles. The effect increased with the strengthening of the ditches by underwater barriers.

But the most widely used common wire fences - which had a standard width of up to 4,5 meters. Barbed wire barriers became the strongest and most successful artificial obstacle in the defender's arsenal. This is not surprising: after all, the barriers hindered the movement of manpower - the main power of the armies of the First World War. However, due to the use of wooden stakes (3 stride is the standard distance between the stakes), barriers unmasked the shooting trenches immediately behind them. 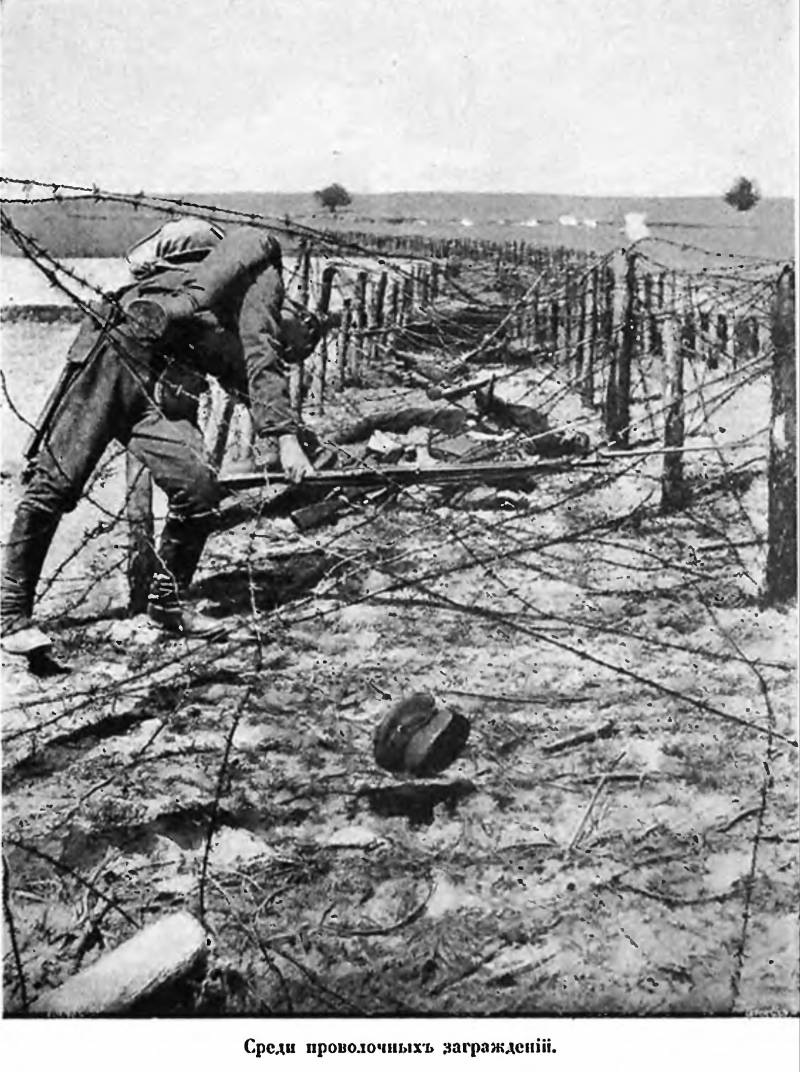 Wire obstacles were sought to be installed at a distance from the trenches, which exceeded the distance for throwing grenades (60-80 steps) and, preferably, in several rows (since for each row a separate adjustment was required, this made it difficult to destroy the obstacles with artillery). The distance between the rows of the barrier should have prevented the enemy from maneuvering freely (the standard distance between rows is an 1,5 step). Therefore, it was believed that it is better if the barrier has more narrow lanes than less wide lanes.

Wire fence. Manual on military engineering for all branches of the military. SPb., 1910.

Tight barbed wire was not stretched - winding around stakes that were driven in at the corners of equilateral triangles. The boom count was connected to the 6's adjacent stakes with wire - and on the whole the wire net was tried to impart as much irregularity as possible. For this purpose, the height of the stakes did not match. 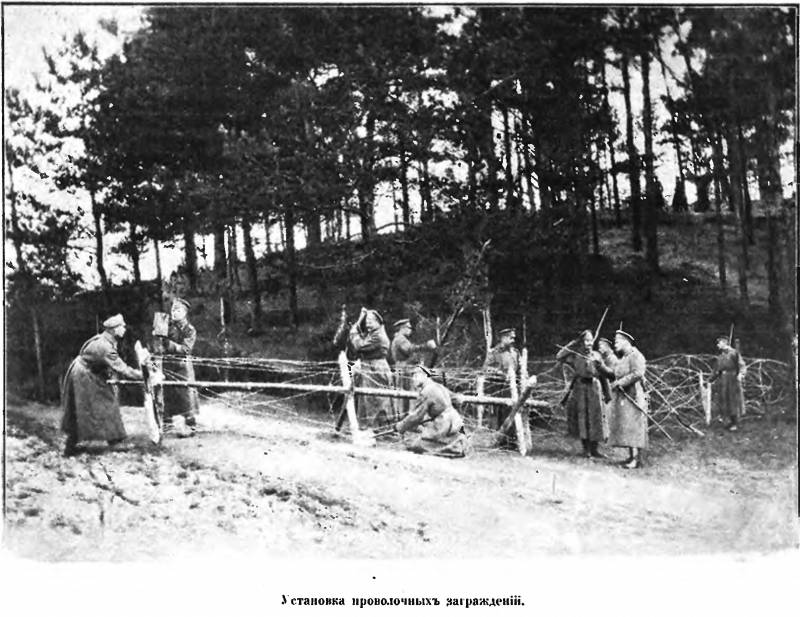 Various variants of wire barriers appeared - for example, by 1917, there appeared: a) leg loops, b) barricades on several rows of slingshots (thickly braided (in the form of "leg loops") with barbed wire), c) wire snares. 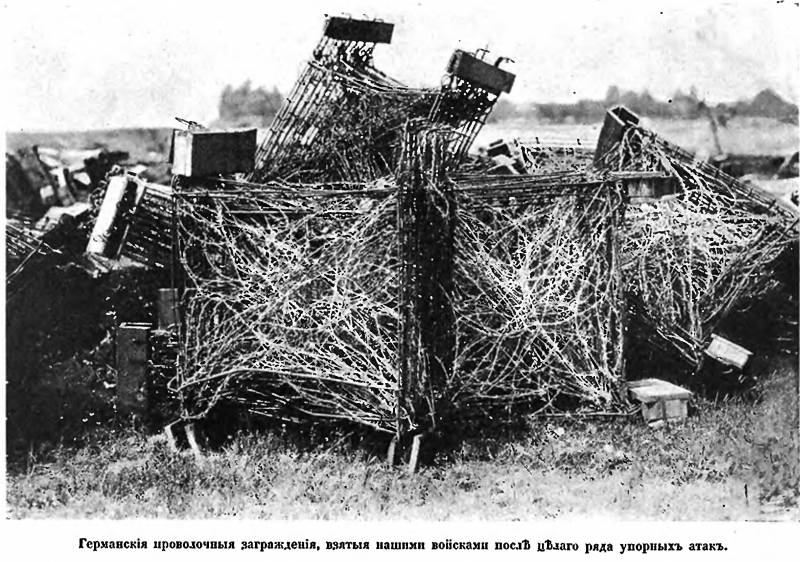 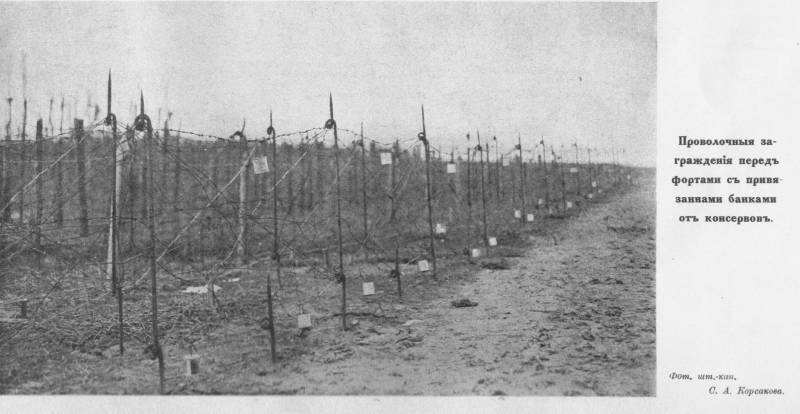 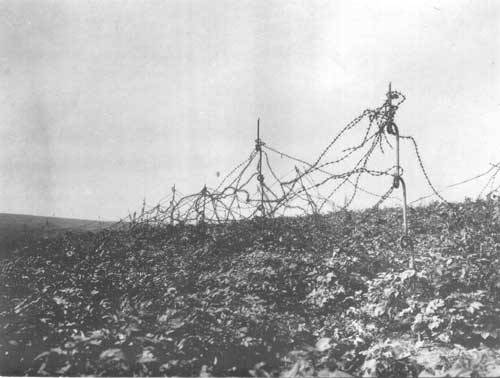 An electric current was sometimes allowed through the wire, which gave the barrier even greater force.

The Russian army also used such barriers, albeit on a smaller scale. The first experience of creating electric wire barriers was carried out on the South-Western Front by a mobile automotive power station, which was installed on a 2-ton truck and adapted to generate a voltage of 230 volts. The transformer installed on the truck allowed to increase the voltage to 2400 volts. At the front, the station was put in der. Hlubochk-Velky and electrified wire fences, built around with. Kurovtse.

The Riga section of the 12 Army of the Northern Front was provided by 4 high-voltage automotive power stations - they fed a network over a length of 12 kilometers (and counting with a cable over 50 kilometers). Electric barriers were installed on the first line of the second frontier of the Riga positions, on the section from Sukhoy Dvina to the Zarinsky knot inclusive. Obstacles were checked daily and kept in constant combat readiness for use at the request of the commanders of combat sites. They were installed on one or two rows of stakes, depending on the local situation and the nature of conventional wire networks. The power supply cables were laid partly on poles, but mainly (to protect against breaks) underground. Distributors were placed in the dugout. A telephone message was established between the distributors, electrical stations and military units in the positions. A workshop, a garage for cars and a warehouse of equipment for electric car stations and electric wire barriers were created for the repair of machinery, appliances, and storage of spare property. The networks were serviced by special electrotechnical teams.

In addition, by decision of the Chief of Staff of the 12 Army, work was carried out to create electrical protective obstacles on the closest approaches to Riga - in the area closest to the city. First of all, electric outposts were installed along the roads leading to Riga - on the Mitavsky highway, Long road, Bausskoe highway, Kalnetsami highway, Shlokskoe highway (in places that were difficult to get around). At the same time, electrified obstacles were placed at the bridges across the r. Dvina in Riga. Upon completion of these works, they switched to connecting individual electrified areas to a single system of electric barriers. It was intended to power these barriers from the city’s central power station — through 4 transformer stations.

Wire nets are often connected to wolf holes. This artificial obstacle deeper than 2 m had a pointed stake at the bottom, driven into the ground. The pits were staggered in several rows - with the stakes also driven in between (wire nets were tightened on the latter). 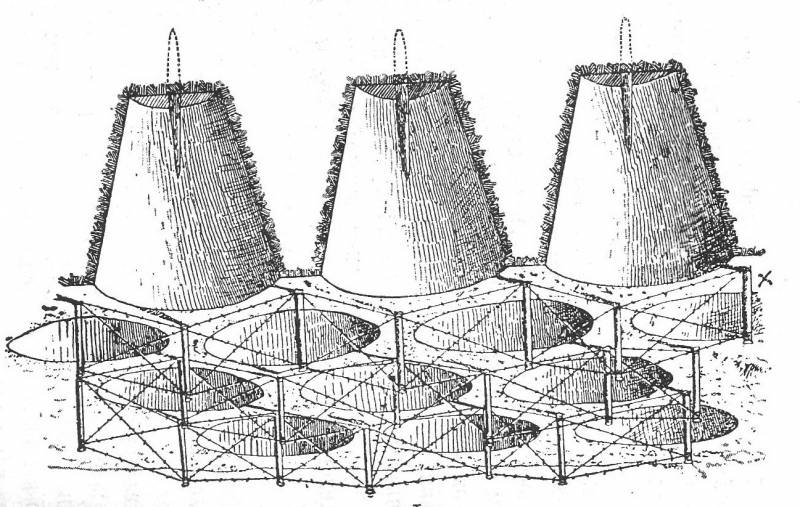 Wolf holes reinforced with a wire net. Manual on military engineering for all branches of the military. SPb., 1910. 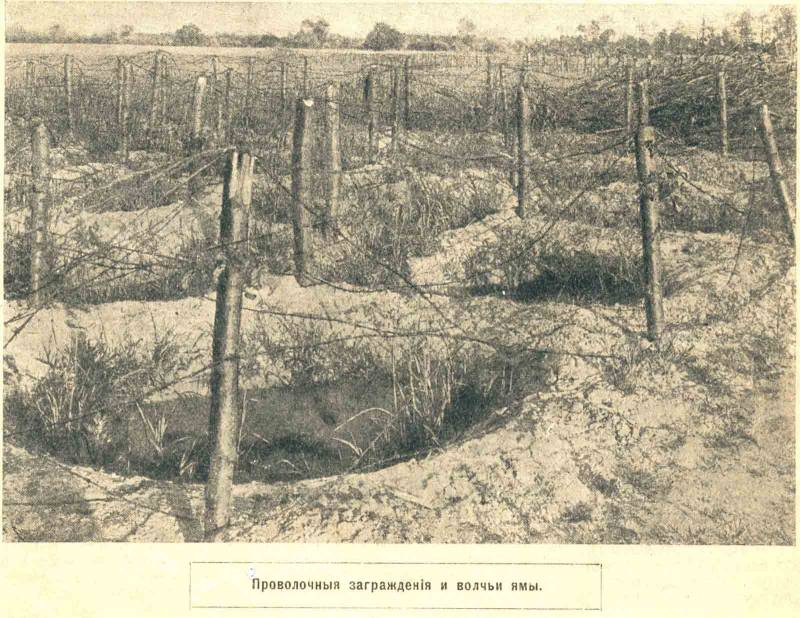 Austrians were great connoisseurs of wolf holes. But, in contrast to notching and wire obstacles, wolf holes were neutralized most simply - heavy artillery fire stirred up holes and craters into the total earth mass.

Effective artificial obstacles were notches. They were formed from 3-x rows of trees - so that the tops of the rear trees covered the front trunks (if necessary, the obstacle could be strengthened with poles). The zaseki were attached to the ground with flyers.

Such an obstacle not only seriously impeded the movement of the attackers - it was difficult to destroy even by heavy artillery.

Similar mines were created by the Germans on the Riga, Dvina and Mitav fronts.

Seen from short trees. Manual on military engineering for all branches of the military. SPb., 1910. 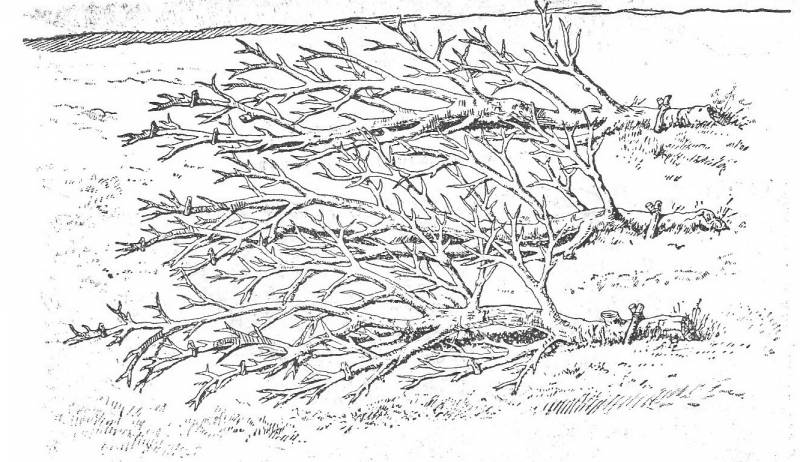 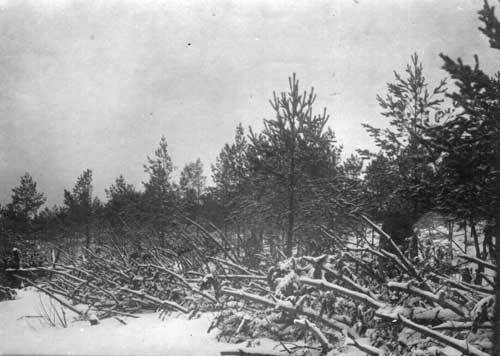 Palisade was built from pointed logs, which were buried one next to the other and were tied together by horizontal boards, which were nailed by the defender. The obstacle resembled a fence and was, as a rule, in front of the positions - in the pit.

The slingshot consisted of 2-3 poles of cross (height up to 107 cm) and a cross member that connected them (length 1 - 1,5 m). On ribs and diagonals, the slingshot was woven over with barbed wire. To make it difficult for them to take apart, the slingshots were also fastened together with barbed wire. Slingshot was a mobile barrier, was used to repair stationary wire barriers, blocked the aisles in the wire barriers. 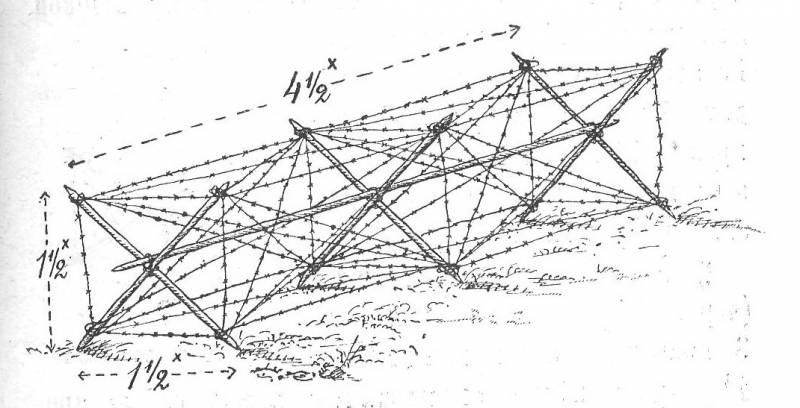 Slingshots. Manual on military engineering for all branches of the military. SPb., 1910. 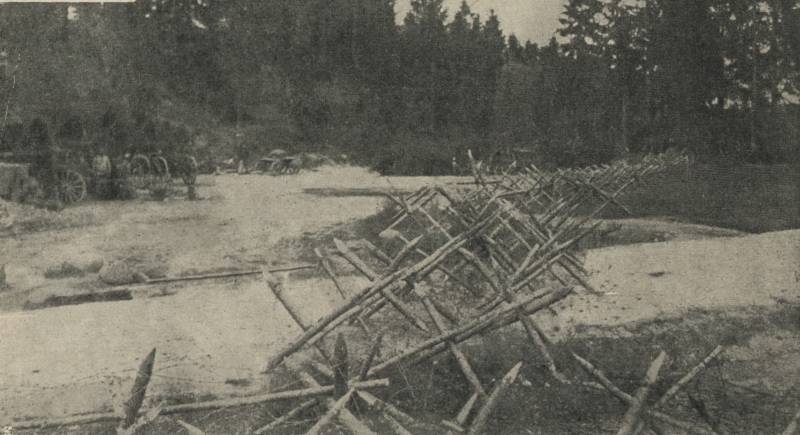 Sometimes dry moats were created, which were amplified by a horizontal wire net. The network was located at the height of the ditch at the height that obstructed the work with wire-scissors, which were put on the rifle. 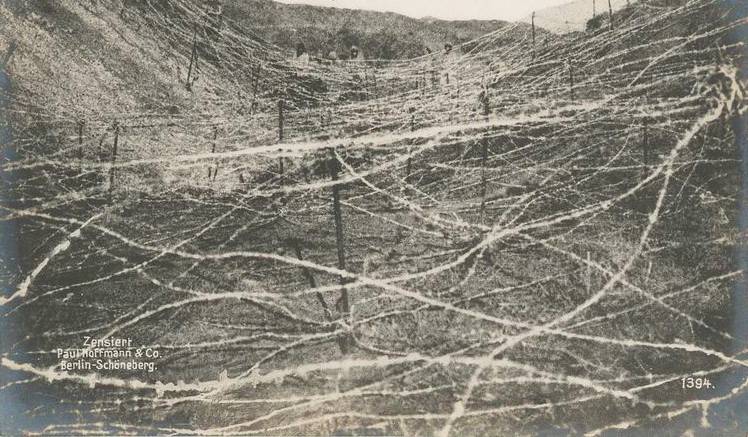