Russian military will fight with Bandera in Syria

March 12 2018
81
Militants of the Ukrainian armed forces and Nazi gangs carry out integration into the Western community individually - by hiring in private military companies. 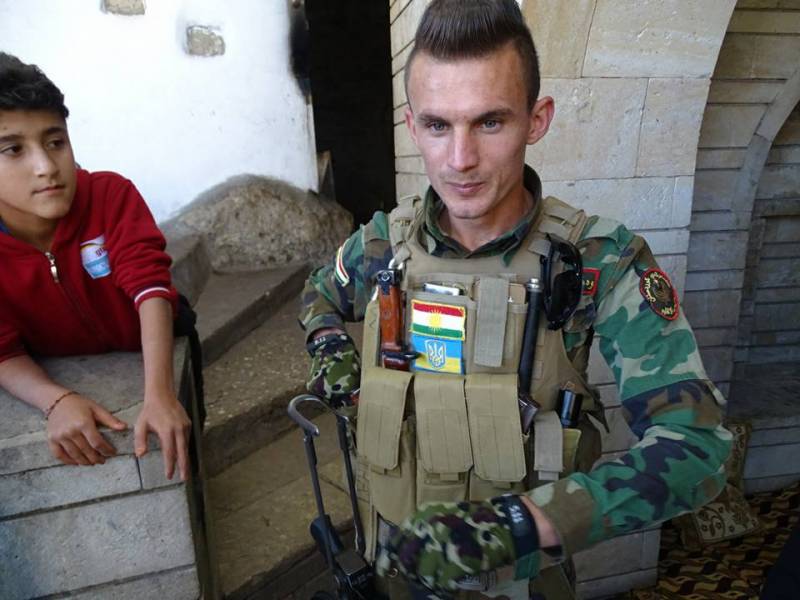 And this is quite natural - each war reproduces a certain number of "extra" people who have received combat skills, but are not able, for one reason or another, to adapt to peaceful life.

So, after the end of the Second World War, former SS men and militants of collaborationist formations from different countries of Europe became almost the protagonists of the “50-60-s wars in Africa of the last century. And after the active phase of the conflicts in the territory of the former Yugoslavia, hundreds, if not thousands of their participants - Croats, Serbs and Bosniaks, joined the French Foreign Legion in various PMCs.

According to him, there are mercenaries in Western PMCs from various punitive battalions who fought in the Donbas.

“Yes, such proposals were received, and I always say that I don’t want to turn our guys into cannon fodder. It is clear that we do not control those people who are sent, for example, to protect some gas pipeline in Kurdistan, relatively speaking, we will send for the appropriate money, but the guys will die there not for a goat soul, to say the least ...

For volunteers who travel around the world - this is their right, after all. If the state does not provide such things, they, unfortunately, go there, fight. I know such facts, that a lot of guys from “Aydar”, “Dnipro”, various dobrobat, “Azov” of the same, they dispersed around the world and this is bad, ”said Yarosh.

It is obvious that the former leader of the Right Sector, an extremist organization banned in Russia, is somewhat flirting. To get to Western PMCs for the "ATO veteran" is a great success today. In a country with a collapsing economy, and galloping unemployment, the alternative for it is “work” in one of the many street gangs. Well, still picking strawberries, or washing toilets in Poland.
We also note that one of the "bonuses" for volunteers in the National Guard, terbats and the Armed Forces of Ukraine, recruiters quite officially and openly pointed out the possibility of training under the guidance of Western instructors, which in turn opens up opportunities for them to hire foreign PMCs.

In an interview with TV channel, Yarosh blurts out, recognizing that in addition to “volunteers who travel around the world” who independently hired in private security companies, a certain part of the militants heads of their gangs and factions actually “sell” to private companies, “by sending, to protect some gas pipeline in Kurdistan ".

Today, the private military business is developing dynamically and the services of military contractors are in high demand. However, it is unlikely that the Ukrainian militants from the neo-Nazi formations are of great interest to the "elite" PMCs who "sit" on the contracts of the US and British government structures, protect the property of TNCs, form and train foreign armies. For this work, the Ukrainian "veterans of the ATO" lacked neither experience, nor education, nor knowledge of Western standards. But there is a lot of bad habits, a tendency to robbery, looting and not motivated by violence. That also does not increase their value in the eyes of employers.

However, they are really recruited, and, moreover, quite energetically. Obviously, some of them will be used, and are already being used as consumables in Syria, to reinforce several YPG units that have recently thinned out (observers indicate that the number of mercenaries of European appearance in these formations has increased significantly). But it cannot be ruled out that the CIA, which oversees a number of PMCs, will try to use such "strengths" of Ukrainian mercenaries as Slavic appearance and command of the Russian language for various provocations against the Russian military contingent in Syria and our allies.

Recall that at one time it was one of the most popular methods of Bandera - pretend to be Soviet partisans Sidor Kovpak, and then, after the liberation of Western Ukraine - the MGB special group. With the help of this masquerade, the UPA fighters tried to set the population against the Soviet regime, and also to identify people sympathizing with it.

It is likely that in this way the Ukrainian punitive can be used in Syria. For example, for the organization of the "war crime" vagnerovtsev. The provocations with "chemical attacks" have become a bit boring, and are no longer so convincing.

In any case, it cannot be ruled out that our military in the Middle East will meet in battle with Bandera. Ukrainian mercenaries in the region already have, in particular, there is information about their presence in the VTS units.