Dushanbe and Tashkent have set their sights on "strategic partnership"

March 12 2018
47
On Friday, March 9, at a meeting in Dushanbe, the presidents of Uzbekistan Shavkat Mirziyoyev and Tajikistan Emomali Rahmon signed a series of documents on the normalization of relations between the two countries. We agreed, in particular, to abolish the visa regime between Uzbekistan and Tajikistan, as well as to resume road, rail and aviation message. The Tajik president has promised to gradually restore the work of all 16 checkpoints at the border. In response, the Uzbek leader said that in the near future relations between the two countries will reach the level of “strategic partnership”. 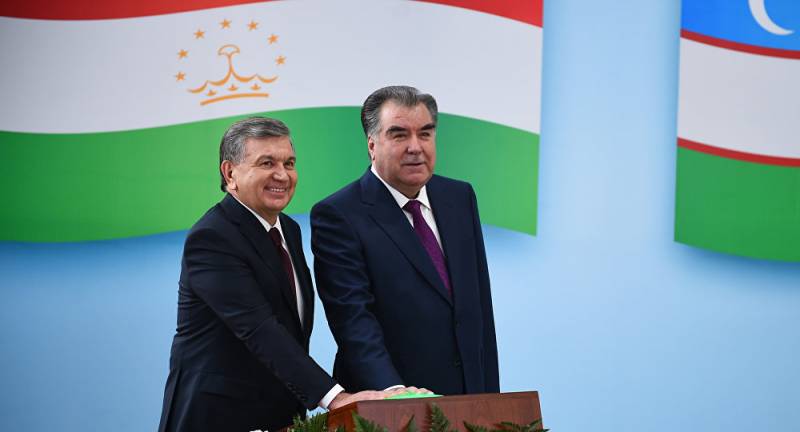 Pans are fighting - at the lackeys of the forelocks crack

Something like this, translated into Russian, you can imagine a picture of the protracted Cold War between Uzbekistan and Tajikistan, caused by a quarrel between the leaders of the two countries. This quarrel has two aspects - ethnichistorical and economic. Let's start with the latest history, which it was made for the population of the two countries during the years of Soviet power.

In 1924, political topographers from the Bolsheviks conducted a national-territorial delimitation of Central Asia. It resulted in the emergence of the Tajik Autonomous Republic as part of the Uzbek SSR. This option was not the most successful. The fact is that the Tajiks are somewhat arrogant towards Uzbeks (something similar to the attitude of our citizens to the villagers).

Tajiks consider themselves to be a nation of more ancient culture and history, hence this light snobbery. The Bolsheviks were far from such ethnic subtleties and therefore put the Tajiks in a subordinate, dependent position on their Uzbek neighbors. Later they tried to correct the mistake.

In 1929, Tajikistan was transformed into a full-fledged union republic. But the sediment remained, moreover, material and visible. An entire Tajik enclave was attributed to Uzbekistan, including the ancient cities of Samarkand and Bukhara, which are the pride of the history and culture of the Tajik nation.

Admittedly, the Uzbek leaders felt the nuances of national relations and behaved with subordinate neighbors not only correctly, but even defended the interests of Tajikistan in high Moscow offices. This tradition has been preserved for many years even after the actual equalization of the republics in rights.

More populated and economically stronger Uzbekistan in every possible way took care of its “well-born” neighbors. Uzbek politicians explained this with the thesis about “one people with two languages” invented in Tashkent. True, it is not only about languages. Peoples are really different.

Tajiks are, according to ethnographers, the northern Persians. Hence their peculiar language, which some experts consider as a Farsi dialect. Others are an independent linguistic branch of the Persian language. Most of the Tajiks live in northern Afghanistan, about a third of the nation (one of the largest in Central Asia) has united Tajikistan.

Uzbeks are Turkic. It is believed that their ethnogenesis based on the ancient Iranian tribes was strongly modified after the invasion of Central Asia by the Mongols and other nomads. The ethnonym "Uzbek" was brought into use after the actual assimilation of the indigenous population with the conquerors and the adoption of a variety of the Turkic language.

Behind this unpretentious picture of the difference between two peoples lies another thousand nuances, more known only to the aborigines of those places. Sometimes these differences led to ethnic conflicts, caused, however, by economic reasons (disputes over the distribution of water, land, etc.).

The communist authorities abolished these conflicts skillfully, without eliminating the causes of them. So, by the time independence of the Tajik and Uzbek republics, they had formed a certain conflict base. It manifested itself primarily in the relations of the leaders of the two countries.

At first, the President of Tajikistan, Emomali Rakhmon, traditionally called his Uzbek counterpart Islam Karimov “atamiz” (“our father”). Then he accused Karimov of oppressing the whole of Tajik. Rakhmon recalled how once during a visit to Uzbekistan, he appealed to a local resident and asked him to name his nationality. The man looked apprehensively at the President of Uzbekistan who was present during the conversation and answered: “I am Samarkand”.

Probably, Rakhmon’s claims were somewhat justified. At least, under Karimov, only 1.5 million people wrote to the Tajik in Uzbekistan. Unofficial sources expand the size of the Tajik diaspora to 11 millions.

Over time, disputes between Rakhmon and Karimov began to escalate into quarrels. Once, at a closed press conference, the Tajik president admitted that he “had argued with Karimov many times, even fought twice. Nazarbayev separated us once, Kuchma the second time. And I told him: "Samarkand and Bukhara, we still take!".

Water and gas as an apple of contention

Rahmon's revelation migrated from a closed press conference to public space. The Uzbeks didn’t react to this, they kept silent. But the observant experts quickly tied up the summits in which Tajik and Uzbek leaders took part, followed by closing the borders between neighboring countries, introducing a visa regime, blocking transport communications and other inconveniences that the two presidents gave their people.

Meanwhile, the claims of the Tajiks to Samarkand and Bukhara, if they were significant in these conflicts, are far from the first. There were disputes over the mutual supply of gas, electricity, and the "utilization" by Tajikistan of the water of the Vakhsh River. In Soviet times, a whole cascade of six hydroelectric power plants was built on it. They started to build the largest one - the Rogun hydropower station, but they fell into long-term construction.

Nevertheless, the capacity of the existing stations was enough to provide the Tajik Republic with energy during the high water summer and even support neighboring Uzbekistan, which stopped its gas-fired thermal power plants for summer preventive maintenance.

In winter, the situation was changing. Due to the lack of water, the generation of electricity at Tajik hydropower plants fell, now the republic was supported by Uzbek thermal power plants. This established order over the years began to fail in the years of independence of the two republics. It got to the point that the shortage of electricity in Tajikistan in winter periods exceeded one third of the total energy consumption of the republic.

The situation was aggravated by the fact that Uzbekistan began to hold not only electricity, but also natural gas. In Tajikistan, people sat without light and heat, they were freezing. Sometimes it led to tragedies. For example, “in the winter of 2008, newborn children died in the country due to power shortages,” these are words of President Rahmon.

Now the Tajik leader not only scolded the Uzbek "atamiz" with the last words, but was looking for a way to save his republic. The solution lay on the surface - to complete the Rogun hydroelectric station in the upper Vakhsh. Below the cascade to build two more smaller stations - Sangtuda HPP-1 and HPP-2.

This time they were already worried in Tashkent. Here they started talking about the “disposal of Vakhsh water by the Tajiks”. The threat was serious. The world knows such examples. Here are the good Americans to regulate the waters of their famous Colorado River. They built reservoirs, dams, dams, drainage outlets, and Colorado stopped flowing into the Pacific Ocean, quietly dissolving in the sands of the American deserts.

The last time the river, as they say hydrologists, "kissed the ocean" in the high flood 1998 year. The ocean survived this, but the adjacent Mexican territories became a zone of ecological disaster. New Vakhsh power plants promised a close picture.

Uzbekistan reacted decisively and blocked the border of Tajikistan. Cut it off from contact with the world through its territory. For Dushanbe, it was, in fact, the only (through Uzbek territory) communication connecting it with other countries. There was an international conflict. Iran has stood up for the Tajiks, whose companies have already gone to the construction of the Sangtuda hydroelectric station 2.

Tehran was able to achieve some relief. Other partners of Tajikistan helped him to establish a motor connection with Russia (through Kyrgyzstan), China (with access to the international Karakorum highway), Afghanistan. Russian power engineers completed the Sangtuda HPP-1. In 2016, the Vakhsh riverbed was blocked to fill the reservoir of the Rogun hydroelectric station.

Already then it became clear that Karimov’s sanctions against Rakhmon did not work. We need to sit down and negotiate, but old grievances and personal ambitions prevented the restoration of relations. Only after the death of Islam Karimov did Tashkent make direct contacts with Dushanbe.

The new Uzbek leader, Shavkat Mirziyoyev, spoke about the normalization of relations with Tajik neighbors and even personally met Emomali Rakhmon. Not only rhetoric began to change. Last summer, O'zbekiston TV channel made a film titled “Uzbekistan-Tajikistan: friendship tested by time”.

The Ministry of Foreign Affairs of Uzbekistan immediately placed the film on its website. Later, speaking at an international press club in Tashkent, Foreign Minister of Uzbekistan Abdulaziz Kamilov described the film O'zbekiston as “a very good film about Tajik-Uzbek relations”.

With such signals began the convergence of the two countries, which ended on March 9 with the signing of breakthrough documents in bilateral relations. Whether they become, as Shavkat Mirziyoyev would like, “strategic”, time will tell. Too many problems between the Tajiks and the Uzbeks gave rise to modern history.

So far, only progress has been made in restoring contacts between the two countries. The next step is the normalization of economic relations. At its lowest point, the annual trade turnover between Tajikistan and Uzbekistan was estimated to total 2,5 million dollars (so much alone exclusive Swiss watches). Now, countries want to trade in the figure of $ 500 million, as they did in their best years.

However, the most serious test of the friendship of “one people with two languages” will be the development of further self-identification of the Tajik and Uzbek nations. And here the issue of the historical affiliation of Samarkand and Bukhara can again become acute on the agenda.

The geopolitical mines, thoughtlessly laid by the Bolsheviks, will still freak out not only the leaders of the post-Soviet countries, but also their peoples.