The historian who seized machine guns

March 14 2018
45
It is always wonderful when theory is combined with practice. AT stories The Russian army has a man who not only wrote fundamental historical works, but also accomplished feats on the battlefield.


His name is Nikolay Andreevich Sytinsky, the author of "Outlines of the History of the 90 Infantry Regiment of the Onega Regiment". This wonderful fundamental work, which appeared in 1903 year and tells the story of one of the best regiments of the Russian army, is familiar to lovers of national military history.

But the author made a feat on the battlefield.

Born in a merchant family in 1871, the city of Helsingfors, Nyuland Province, Nikolai Andreevich, having graduated from gymnasium, entered 1888 as a volunteer in the 90 th Infantry Onega Regiment. And from then on, his life was connected with this regiment. N. A. Sytinsky graduated from the Vilna Infantry School, subsequently participated in the rank of head captain in the Russo-Japanese War.

And 26. 08. 1914 was the custodian of traditions and the historian of the regiment, as well as the commander of the last company 11 of the last captain N. A. Sytinsky had to dislodge the enemy from the forest edge. The Austrians managed to dig in, and the attack was not easy. Before the attack, the captain-historian made a short speech in front of the company formation. Although for several days the fighters hardly slept, the speech made a deep impression - the morale of the soldiers rose.

Moved forward. Initially, the enemy did not notice the Onezh citizens, but then opened fire on the guns and artillery.

At the right moment, the company officer raised his fighters to the attack - and was in the forefront of the attackers. N. A. Sytinsky led both the battle and the pursuit of the enemy.

During the battle, the officer was wounded - a bullet hit in the right side.

He was wounded when the enemy’s trenches were occupied, and a violent hand-to-hand fight was on. Despite the wound, the captain continued to lead the battle, and when the Auezhis secured the edge of the forest, he lost his strength and fell. The unconscious company was bandaged - but this bandage had to wait for 10 hours. 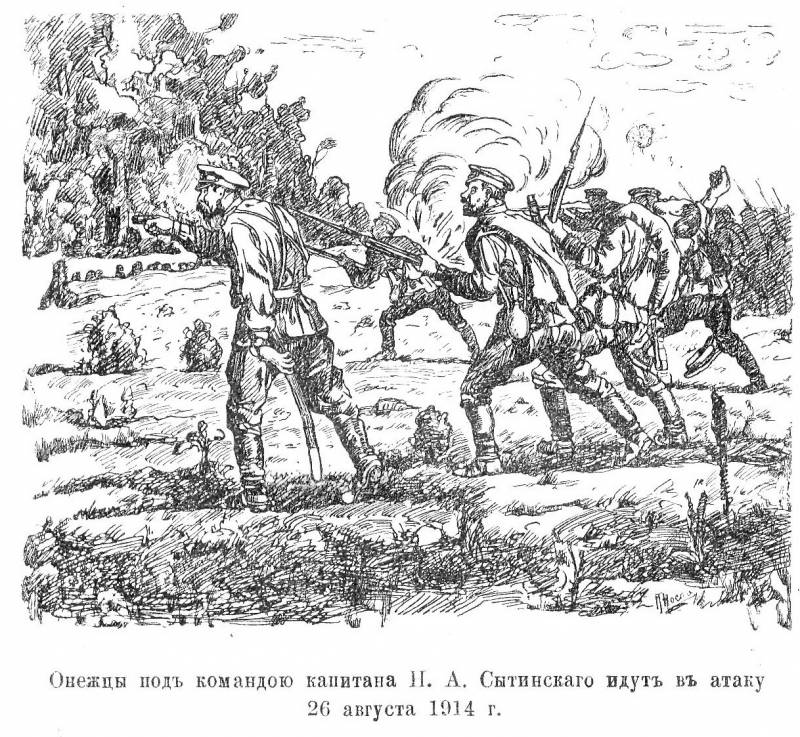 The injury was serious, and the captain was sent to the rear. The company fully completed its combat mission, and 2 machineguns became its trophies. For capturing the fortified position of the enemy and capturing in this battle by his company of operating machine guns, the captain was awarded the Order of St. George 4 degree.

One of the machine guns was captured by an ordinary 11 of the company Yermolayev. An Austrian officer in cold blood fired from this machine gun - inflicting heavy losses on the attackers. Yermolaev ran up to the machine gun, knocking over the "hell machine" with his shoulder, and with the rifle butt smashed the machine gunner’s head.

By his personal example, the officer-historian showed his subordinates an example of courage, tying together the past and present combat history of the 90-nd Onega Regiment - and he himself became an adornment of the history of his native unit.