March 12 2018
25
The arrest of the SBU Vladimir Ruban, head of the Prisoners' Liberation Center "Officer Corps", is astounding in its scope. During the arrest-seizure on the demarcation line in the Donbass at the checkpoint "Mayorsk" in the car Ruban found not just an arsenal weapons, but the arsenal for arming almost a battalion. In less than a day, he was charged with plotting the assassination of President Poroshenko and plans for an armed attack on the Verkhovna Rada and the Presidential Administration, the assassinations of top officials of the regime, and they are listed by name: Avakov, Turchinov, Yatsenyuk. 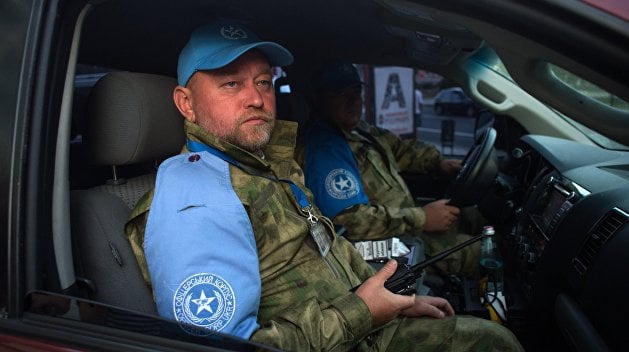 For the organization of such a terrorist act, one of Ruban is obviously not enough, here the whole organization of the “Officers' Corps” and all his acquaintances and friends will go under arrest with him.

Vladimir Ruban denies all accusations, says that they are “making terrorist number XXUMX” out of him, in reality the Cedar esseushnik substituted him, asked to transport furniture from uncontrolled territories, and arrested him with this furniture and with boxes of grenades, grenade launchers and machine guns, a mortar and even 1-mm mines. The fact that they are making terrorist No. 120 out of Ruban is true, but it was not Kedr who set him up, he will be too small for this, here the SBU worked, and most likely, under the direction of the CIA.

Poroshenko’s main victim of the conspiracy spoke very promptly and informatively: he made a statement that the evidence of Ruban’s conspiracy, provided by the head of the Security Service of Ukraine, Vasily Gritsak, “is irrefutable, the goal is to destabilize society through massive terrorist attacks”. Gritsak immediately added the head of the DPR, Alexander Zakharchenko, and the entire leadership of the republic to Ruban's plot. And a little later he said that Ruban cooperated with the movement “Ukrainian Choice” of Viktor Medvedchuk, was his confidant, their connections are now being studied by the SBU.

Vladimir Ruban is also good, not only engaged in the exchange of prisoners, but also fulfilled the instructions of the SBU, as it turns out. On it also the whole general in retirement got. He imagines himself untouchable, he is with the authority of the negotiator for the exchange of prisoners. For esbeushnykh sixes he really untouchable, but in the game with the devil, in which he climbed, there is no untouchable, but there are all sorts of combinations.

Judging by the quantity and quality of the barrels and ammunition thrown to Vladimir Ruban, and the accusations made, Ruban was required by the SBU-CIA as an outlet for the head of Ukrainian Choice, the former prime minister and chief negotiator for the exchange of prisoners in the Donbass Viktor Medvedchuk. He, apparently, will be declared the head of a conspiracy to eliminate Poroshenko and shoot the Verkhovna Rada. What is their real relationship - it is the tenth.

No wonder, the Nazis of all orientations in Kiev have long been grinding their teeth on Medvedchuk, accusing him of having links with Moscow and personally with President Vladimir Putin. Just now, the American protege of Saakashvili and his henchmen attacked Medvedchuk. However, he, too, was untouchable, carried out some orders of Poroshenko himself, often flew to meetings with Putin. But someone strongly pressed Poroshenko himself. Who could it be?

Obviously, Medvedchuk will be accused of fulfilling the task of Vladimir Putin to intercept power in Kiev with the help of the "organized terrorist group" Vladimir Ruban. All this implies mass arrests and a demonstration trial of "terrorists" in the spirit and scope of the Third Reich. Instead of arson of the Reichstag - the planned execution of the Verkhovna Rada.

The staging is conceived grandiose, one SBU will not pull this one, because it needs the support of the world fake media, which only the CIA can provide. Most likely, the CIA is the developer of this operation, and the conclusion suggests itself that its ultimate goal is Vladimir Putin. To get an additional reason for delegitimizing the presidential elections in Russia.

But Vladimir Putin and not such charges were brought, one more - one less, what's the difference? Just now the world doping scandal survived. Putin is the president of Russia, which possesses the newest weapons, and no fake scandals can affect it. That is, Putin may not be the ultimate goal of Operation Ruban - Medvedchuk.

The ultimate goal of this operation may be Poroshenko himself, because Medvedchuk is his creature, he fostered and defended him, for some reason he allowed to fly to Moscow. About the possibility of such an ending says that Ruban is credited with two goals at once: not only an attempt on Poroshenko, but also the execution of the Verkhovna Rada. When the flywheel of this process goes up, Poroshenko can go from the category of victim to the accomplices of the “terrorists”, he can be accused of secret complicity with Medvedchuk. They write that the attack on Poroshenko was staged, and the real purpose of Ruban was the execution of the Verkhovna Rada and the murder of Avakov, Turchinov, Yatsenyuk. So Poroshenko wanted to get rid of their political rivals.

The obvious political objective of this operation is the elimination of the remnants of the “pro-Russian opposition” in the country, all the unreliable from the point of view of the Nazis, including Poroshenko himself, and the establishment of an overt nationalistic dictatorship. About which Bandera has long dreamed of.

Theorists have long expressed that Nazism lives by expansion, and if it is impossible outside, it turns inside. The show with the search and repression of the enemies of the nation, external or internal, must continue, because nothing more can be presented by the Nazis to the masses. What Bandera power built in Ukraine for four years, created, equipped? Nothing, the country's GDP fell by 50% - this is devastation, and Bandera needs to blame it on someone, to throw dust into the eyes of indicative lawsuits. Poroshenko is very suitable for the role of a scapegoat for all the "peremoga" achieved under his leadership.

Washington is interested in getting a Bandera national dictatorship ready to fight with Russia, but if something goes wrong, it goes to “Plan B”: destabilization of the whole country will occur, civil war will break out all over Ukraine, which the United States also arranges: Europe will reliably cut off from Russia by a zone of civil war, and Washington will wash its hands, accusing Moscow of what is happening. US Special Representative Kurt Walker had already guessed in advance to accuse Moscow of the growth of nationalism in Ukraine, so the offender accuses the victim that his use of violence forced her to resist.

The combination is difficult, but also fit into it seriously. Many interested parties understand everything, and will somehow defend themselves, do something to save them. The notorious "night of long knives", without which there is no real revolution and the establishment of the dictatorship of revolutionaries, is probably already near. Such a comprehensive "plot of Ruban - Medvedchuk" implies a very large number of conspirators, and from the top down. Now it all depends on who thinks better. Especially in the APU, which will thin out primarily from all unreliable from the point of view of the Nazis.

Ukrainian political scientists and journalists who consider themselves “independent” blame everything on internal disassembly and spring aggravation. Vladimir Ruban did not represent any danger to the authorities, and of course he did not plan any murders. "This is the degradation and debilization of the state Ukrainian organism." Characteristically, militant ATO volunteers sing along with them, they believe that Poroshenko is simply clearing the clearing of unwanted politicians, and Medvedchuk's turn came.

Indeed, a single sniper with a rifle is enough to assassinate Poroshenko, this was enough even for the American President Kennedy. Killing Poroshenko in itself would have led to the destabilization of the regime, without any military operation in the center of Kiev. At the same time, the execution and assault of the Verkhovna Rada and the Presidential Administration do not guarantee the achievement of the objectives attributed to Ruban, the president and the leadership of the country can be saved, because they have armed guards. President Yanukovych in a similar situation managed to escape.

The plan attributed to Ruban is a script for a cheap action movie, not a special operation. Why is the SBU not afraid to present it? According to Goebbels' covenant: a lie must be enormous, so that people believe in it, and so that it can be used for mass repression.

Being in the whirlwind of events, “independent” journalists and volunteers do not see that Ruban and the “Officer Corps” are the first signs, tomorrow they will be declared “enemies of the nation and terrorists”. It is well known in stories political aberration of vision of victims of future repression - they never believe that they are following in line, because they are “theirs” and do not do anything illegal, they believe, as Vladimir Ruban believed. The hero of Ukraine, the people's deputy Nadya Savchenko, already arrested Vladimir Ruban, gave honor. Does she give a report that becomes a conspirator? She feels untouchable, which Ruban felt like yesterday. There are a lot of such Nagy in Ukraine, and they will all come after them.

Everyone in Ukraine, who has a good attitude towards Ruban and Medvedchuk and shares their views, must now think about saving their lives.

Ctrl Enter
Noticed oshЫbku Highlight text and press. Ctrl + Enter
We are
Reports from the militia of New Russia for 27-28 September 2014 of the yearHeadsets Serdyukov surfaced at the "Northern Shipyard"
Military Reviewin Yandex News
Military Reviewin Google News
25 comments
Information
Dear reader, to leave comments on the publication, you must sign in.