Movie hall: how rubber Rodchenkov made al Qaeda on Oscar-2018

March 11 2018
23
Well, finally, the main “authoritative” film event of the year was thrown off. Another detachment of the elect took part in the Oscar's golden candies. The main lollipop went to the director Guillermo del Toro with his over-politically correct drama “Form of Water” about the love of a disabled woman and the sea monster, whom evil doctors want to put on experiments. Most recently, Guillermo pleased the audience with a completely unconscionably empty, but entertaining and highly entertaining film theater about the war of the kaiju monsters with the giant robots in a picture called the Pacific Rim. And now the Mexican decided that it was time for the gringo to fork out for an Oscar. The truth in the luggage of Guillermo's paintings were already golden candies, but for makeup, scenery and camera work. Before the officially communed genius is clearly not enough.


And so, Guillermo poraznul brain and decided that if he got into the trend of the maximum even fantastic (in the literal sense) political correctness, then the candy is guaranteed to him. And I didn’t lose it, I didn’t lose it so much that the prediction of the recipient of the golden candy was absolute. Those. now for the "universal" recognition of genius and the offering of laurel brooms, a conformist chuyk and craft skills are enough. Visionary work, creativity and a little bit of dissent died out, because they were poorly controlled. “Democratic” lobbying and screaming crowds on the streets, protecting LGBT, feminists, “green”, and even deserted ground squirrels, slowly ousted concern for cultural, and most importantly social, aspirations of the people at all.

Guillermo did not have time to wash his lollipop with champagne, as domestic citizens from the film industry began eagerly to smooth out a figurine of a new recognized genius. At the moment, a whole column of “film critics” lined up with my favorite film expert with the face of a heavy cherub drinker Anton Dolin. I don’t remember such an obsequious champing since, in Cannes, a drama about the love of two lesbians “Life Adele”, triumphantly paraded like a cockroach. Then only Antosha rolled a few songs of praise for this film in various media, including the purely state ones. And this is in a country where its head declares an irreconcilable struggle for traditional values? And it would be possible to drown it in sophistic arguments about views on creativity, but I have nothing to do with creativity, as I have already explained. 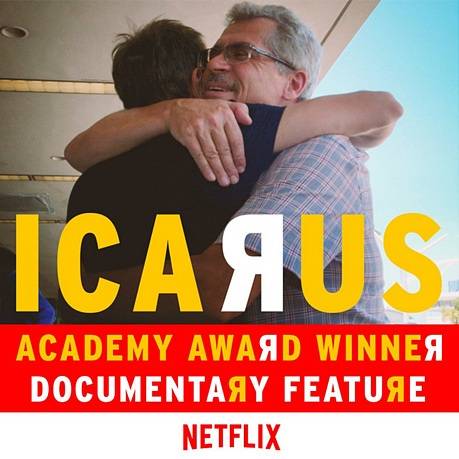 But this is so - the touches to the portrait of “unbiased and professional” film award of world scale and homegrown adherents of foreign trends. But the most interesting thing begins when this curtain, woven from a joyous squeal, is opened slightly. After all, the main candy for the documentary was awarded to the creators of the film “Icarus”, which bypassed the other “non-runners” - Middle Eastern creators of the “Last People of Aleppo” film.

Long disassemble all peripetias stories with Grigory Rodchenkov I do not see the point, I will only indicate the essence. As it turned out, the mentally not very stable citizen Rodchenkov was haggling with specific drugs from under the floor. After he flew out of the Moscow laboratory with the prospect of initiating a criminal case (by the way, with the help of WADA), the guy ran for the cordon. There he was quickly sewn with angel wings, as the former hostage of the regime who chose a free life.

Recently, the disease even made a plastic of the physiognomy and quickly presented the result to the public, accompanied by a statement about the fears about their lives. Then, however, he caught himself and pulled on his face balaclava and glasses. This is true, one of the unique cases in history, when an 60-year-old man did not understand that a condom should be worn before sexual intercourse, and not after.

The painting “Icarus”, from a purely craft and propaganda point of view, was done professionally. Then you and disturbing music at the right moments, and the pictures of the ominous Kremlin, and hourly flashing, like the eye of Sauron, the face of Vladimir Putin, and even the Victory Parade, annually forcing the western "partners" to vibrate, crammed. In general, all that is needed is that a foreign philistine who is prone to hysteria, even peeking on hats in the form of the female genitalia, will be sick of epilepsy at the mere mention of "Russians."

The director of this Oscar-winning masterpiece is Brian Vogel. By the way, it was this creator who helped Rodchenkov get out of the country. Apparently, Brian at the same time and helped Grisha to enter the role more skillfully. To say that after the disclosures and the skillfully directed coil of anti-Russian scandals played out, Vogel’s career went up - to say nothing. This apprentice, before his “triumph”, made only one single penny comedic melodrama, which had failed in all respects and is now in the frankly trash “red” zone of the rating. Here is a talent ... 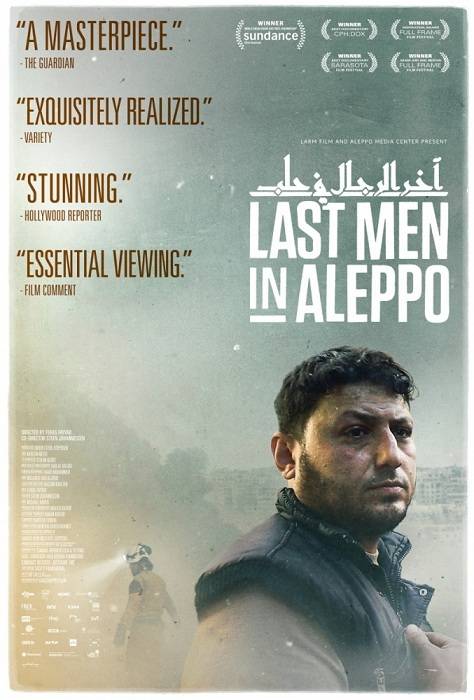 Competitor "Icarus" on agitation force is not inferior to the opponent

However, one of the contenders for this year’s lollipop was the sentimental “Last People of Aleppo” tape, which touched the uncomplicated narrow-minded feelings of the Western consumer from the cohort of eternal activists no less skillfully. And the comrades who worked on this picture, as they say, deserved. For example, one of the directors, a certain Steen Johannesen, has already proven himself in the field of anti-Russian propaganda, having spent his euro during the making of the film “Putin’s Kiss”. In addition, the protagonists of the painting “The Last People of Aleppo” are “white helmets” licked by the west to a glossy shine. The very “helmets” that have already been convicted of such close ties with al Qaeda that many political scientists do not make any differences between these interest groups. This is in addition to allegations of trafficking in human organs. 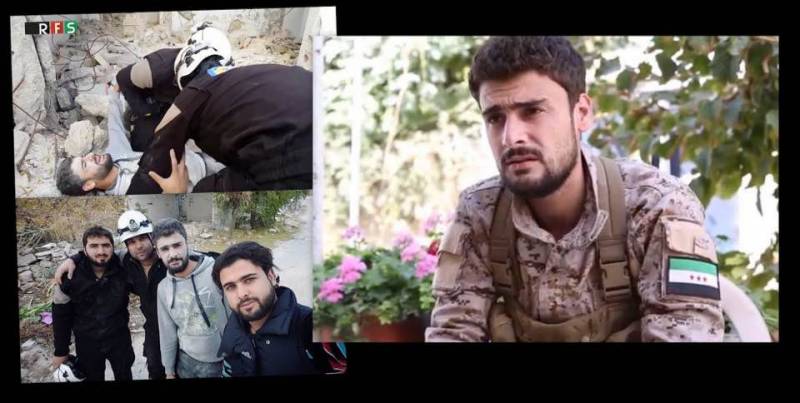 One of the caught "victims of Russian-Assad aggression"

So why the cherished golden lollipop swam away to the film about Rodchenkov and his “revelations”? How rubber face could beat al Qaeda? Firstly, the Olympic year dictates our rules to our “independent and non-living”, there is no time for creativity - timeliness, you see. It is required to somehow justify this disgraceful sports farce.

Secondly, the "helmets" have already received their share of cinematic trinkets last year with the help of the "white helmets" documentary film. To tell the truth, even if we abstract away from all the bloody facts related to this organization, the film “White helmets” is so cloyingly teary tape that it fills mouthwash after the first viewing. Squeamishly pitiful songs accompanying the endlessly hysterical and whining Kaskonostsy look disgusting and false. True, this did not prevent advanced Hollywood bohemians to take a picture with a bang.

Netflix festival potential "true to itself" year after year

Thirdly, one of the most interesting companies, Netflix, slides along the seam of all the “documentary” paintings that carry the golden lollipop. This American entertainment company has long settled in a “documentary” anti-Russian film. One of the company's debuts is the tear tape Winter in Fire. Ukrainian struggle for freedom. The absolute one-sidedness of the picture looks at us directly from a poster, in which a juvenile villager in a characteristic wreath and embroidered shirt "confronts" the Kiev police in the form of a deliberately black and gray mass of "Berkutovtsy". After this quite successful campaign, Netflix "supervised" and "White Helmets" and "Icara". In this case, all this with a brick face lack of commitment and impartiality. And Oscar took it all with delight. And Netflix, by the way, is a very powerful mouthpiece of the information war, which does not have its own broadcasting except in China. 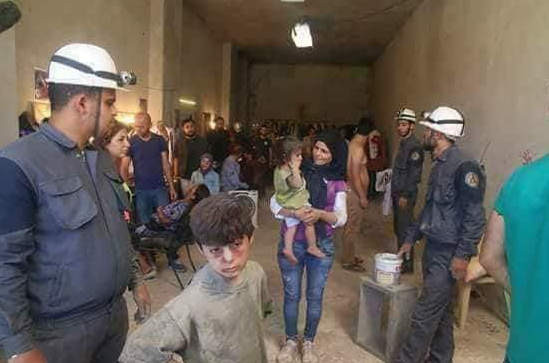 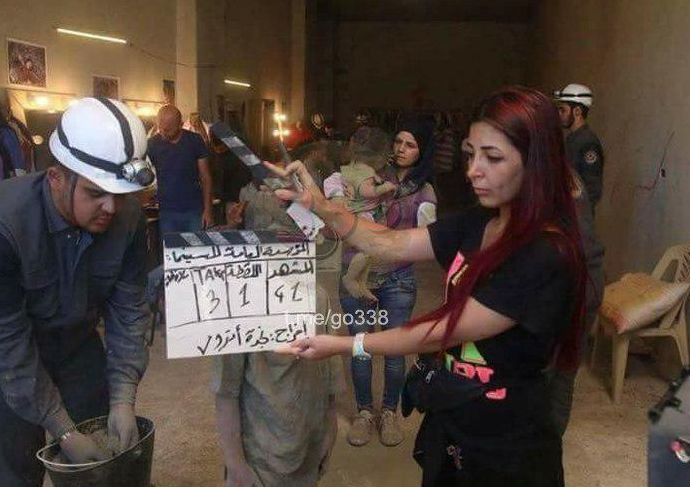 Fourth, apparently, it became too inconvenient for Western citizens to ignore the white helmets that have been unmasked flayed over and over again with lamb persistence. And in general, who in the State Department managed to hire such stupid Arabs as God’s lambs who would be resurrected at the wrong time, then the viper would jump out from under the concrete slab, then during the staging of the next terrible bombardment they allow the dead kids to walk around the shooting area ... 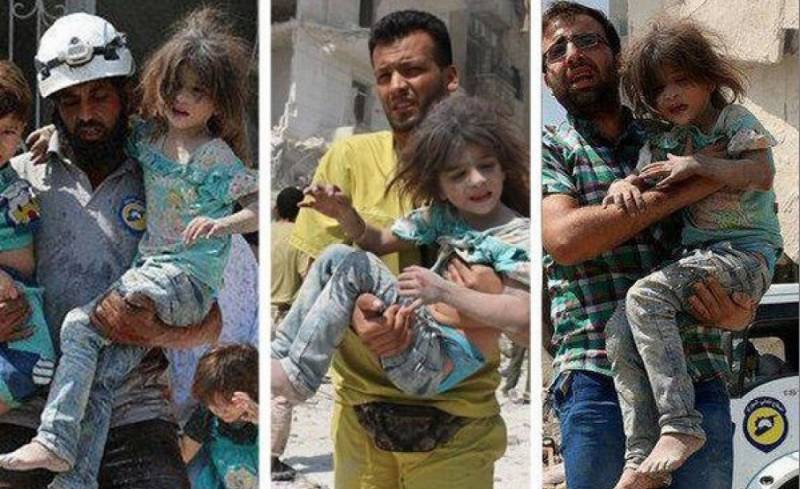 If only the girl changed

But the attention "Kasuchka" relying on itself was still received. The official representative of the US State Department Heather Nauert immediately after the Oscar congratulated the creators of the film "The Last People of Aleppo" with the nomination for such a sweet golden lollipop. So the agitprop, which the home-grown “geniuses” bumped for almost 30 for years, turns out to be in the country of freedom and democracy in such a color that the Bolsheviks are far from it.

The main thing is that no matter how frightening this propaganda machine may be, it stands on clay feet. And, to balance the information space, at least in his own country, a lot is not necessary. But who will be doing this? "Artdokfest", obsequiously looking into the mouth of the West and sawing silversmiths 30? Directed that can not deal with their young mistresses? Actors stepping on the stage with their own fume? Alas.

Ctrl Enter
Noticed oshЫbku Highlight text and press. Ctrl + Enter
We are
Project "ZZ". Olympic sport, chemistry, bottle, hara-kiri and chamber for looniesResults of the week. "Well, do not change me because of every idiot!"
Military Reviewin Yandex News
Military Reviewin Google News
23 comments
Information
Dear reader, to leave comments on the publication, you must sign in.