Flight of the Buran - as it were 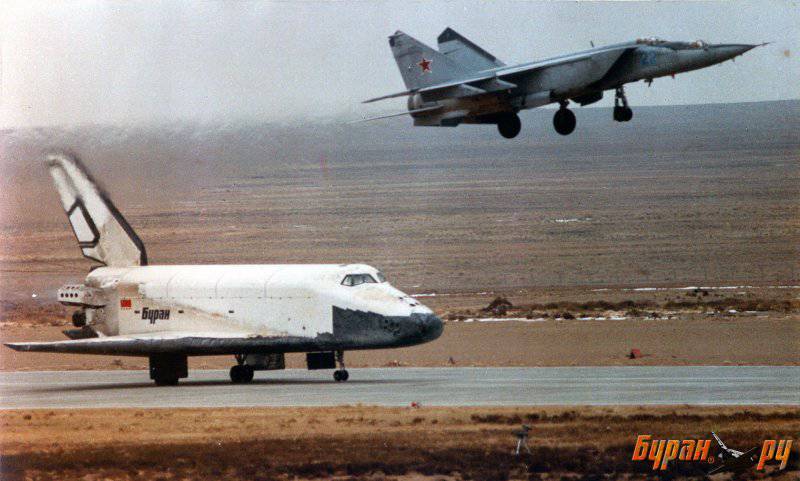 15 November 1988 of the year took place the launch of the space shuttle "Buran". After the launch of the universal rocket-space transport system “Energy” with “Buran”, he went into orbit, made two orbits around the Earth and made an automatic landing at the Baikonur cosmodrome. This flight was an outstanding breakthrough in Soviet science and opened a new stage in the development of the Soviet space research program.

First of all, it should be noted that the sources of the Soviet national space science are two outstanding people - M. Keldysh (President of the USSR Academy of Sciences) and S. Korolev (Chief Designer). It was thanks to their efforts and authority that the Soviet Union took a leading position in the global cosmonautics 60-70-s. It was in those years that the Academy of Sciences adopted a program for the study of space. The program envisaged conducting scientific works in two directions: conducting studies of Venus, the Moon and Mars with the help of spacecraft, as well as the development of space around the Earth with the help of satellite satellites and spacecraft. After the death of Keldysh and Korolev, significant changes were made to the program, and the activities of the Academy itself were aimed at serving the Soviet military-industrial complex. As a result, it turned out that no one bore any responsibility for the failure or success of this or that space project. It was in such conditions that the creation of the Buran spacecraft began. 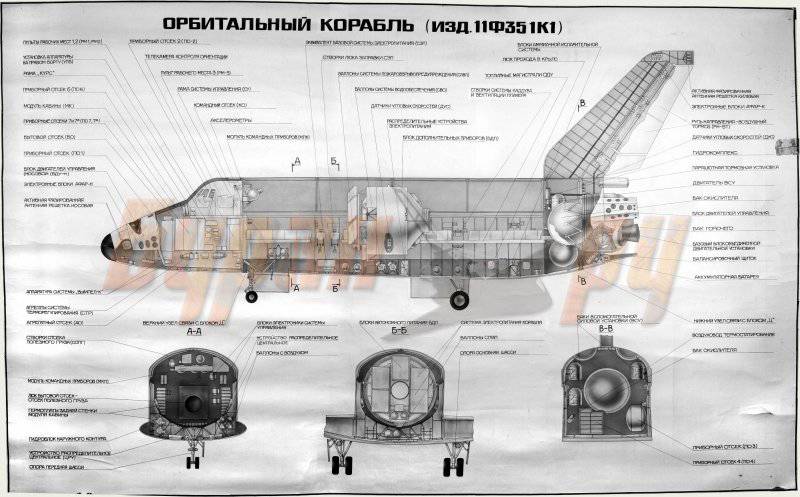 The fact that in the Soviet Union it is necessary to create a domestic reusable space system that would serve as a counterweight in the policy of deterring potential adversaries (Americans) was told by analytical studies conducted by the Institute of Applied Mathematics of the USSR Academy of Sciences and NPO Energia (1971-1975). Their result was the assertion that if the Americans launch the reusable Space Shuttle system, they will receive an advantage and the possibility of launching nuclear missile strikes. And although the American system did not pose an immediate threat at that time, it could have threatened the country's security in the future.

Work on the creation of the program "Energy-Buran" was launched in 1976 year. About 2,5 of millions of people who represented 86 ministries and departments, as well as about 1300 enterprises throughout the Soviet Union, took part in this process. For the development of the new spacecraft, the NPO Molniya was specially created, headed by GE.Lozino-Lozinsky, who already in 60's worked on the reusable space rocket system Spiral.

It should also be noted that, despite the fact that for the first time ideas for creating spacecraft-airplanes were voiced by Russians, namely Friedrich Zander, back in 1921, domestic designers didn’t hurry, because it seemed to them extremely troublesome . True, work was carried out on the design of the Planning Spacecraft, but due to technical problems that have arisen, all work was stopped.

But work on the creation of winged spacecraft began to be carried out only in response to the beginning of such work by the Americans.

So, when in the USA, work began on the creation of the Dyna-Soar rocket plane in the USA, the USSR launched the P-60, P-1, Tu-2 and Tu-130 rocket-planes. But the greatest success of the Soviet designers was the project "Spiral", which was to become the forerunner of "Buran".
From the very beginning, the program for creating a new spacecraft was torn by conflicting requirements: on the one hand, the designers were required to copy the American Shuttle in order to reduce possible technical risks, reduce the time and cost of development, on the other hand, the need to adhere to the program put forward by .Glushko about the creation of unified missiles intended for the landing of the expedition on the surface of the moon.

During the formation of the appearance of "Buran" were proposed two options. The first option was similar to the American "Shuttle" and was a scheme of a plane with a horizontal landing and the placement of engines in the tail. The second option was a wingless scheme with a vertical landing, the advantage of which was that it was possible to shorten the design time by using data from the Soyuz spacecraft.

As a result, after the tests, the scheme with a horizontal fit was taken as the basis, since it most fully met the advanced requirements. The payload was located on the side, and the second stage cruising engines were located in the central unit. The choice of this location was caused by the lack of confidence that in a short time it will be possible to create a reusable hydrogen engine, as well as the need to maintain a full-fledged launch vehicle that could independently put into orbit not only the ship, but also large volumes of payloads. If you look a little ahead, we note that this decision was fully justified: Energia managed to ensure that large devices were placed into orbit (it was 5 times more powerful than the Proton launch vehicle and 3 times - the Space Shuttle).

The first and only singer of "Buran", as we said above, was held in 1988 year. The flight was carried out in unmanned mode, that is, the crew was not on it. It should be noted that, despite the resemblance with the American Shuttle, the Soviet model had several advantages. First of all, these ships were distinguished by the fact that the native could take into space, besides the ship itself, also additional loads, and also had a greater maneuverability during landing. "Shuttles" were designed in such a way that they landed with the engines off, so they could not try again if necessary. “Buran” was equipped with turbojet engines, which provided such an opportunity in case of bad weather conditions or any unforeseen situations. In addition, the “Buran” was equipped with a system of emergency crew rescue. At a small height, the cabin with the pilots could be catapulted, and at high altitudes there was the possibility of disconnecting the module from the launch vehicle and making an emergency landing. Another significant difference was the automatic flight mode, which was not on American ships. 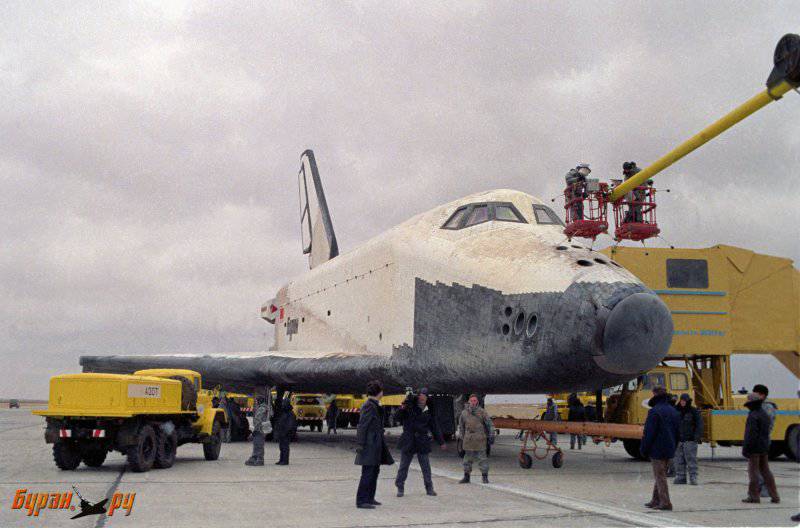 It is necessary to note the fact that Soviet designers did not harbor any illusions about the efficiency of the project - according to calculations, the launch of one “Buran” managed as the launch of hundreds of disposable missiles. However, initially the Soviet ship was developed as a military space system. After the end of the Cold War, this aspect has ceased to be relevant, which cannot be said about spending. Therefore, his fate was decided.

In general, the program to create a multi-purpose spacecraft "Buran" provided for the creation of five ships. Of these, only three were constructed (the construction of the rest was only laid, but after the program was closed, all the groundwork for them was destroyed). The first of them was in space, the second - became an attraction in the Moscow Gorky Park, and the third is in the Museum of Technology in German Sinsheim.

But first, full-size technological mockups (total 9) were created, which were intended for strength testing and crew training.

It should be noted that the enterprises from all over the Soviet Union took part in the creation of the Buran. Thus, at the Kharkov Energopribor, an autonomous control complex Energia was created, which brought the ship into space. At Antonov ASTC, the design and manufacture of parts for the ship was carried out and An-225 “Mriya” was created, which was used to deliver the “Buran”.

To test the Buran spacecraft, 27 candidates were prepared, which were divided into military and civilian test pilots. This separation was due to the fact that this ship was planned to be used not only for defense purposes, but also for the needs of the national economy. Colonel Ivan Bachurin and Igor Volk, an experienced civilian pilot, were appointed as leaders of the group (this was the reason that his group was called the "wolf pack").

Despite the fact that the Buran's flight was performed in automatic mode, still seven testers managed to go into orbit, however, on other ships: I.Volk, A.Levchenko, V.Afanasyev, A.Artsebarsky, G.Manakov, L. Kadenyuk, V. Tokarev. Unfortunately, many of them are no longer among us.

More testers lost a civilian detachment - testers, continuing preparations for the Buran program, while experiencing other planes, flew and died one after another. The first died O. Kononenko. A.Levchenko left him. A little later, A.Shchukin, R.Stankyavichus, Y.Prikhodko, Y.Sheffer also passed away.

Commander I. Volk himself, having lost so many people close to him, left his flight service in 2002. A few months later, the trouble happened to the Buran ship itself: it was damaged by fragments of the roof of one of the assembly and test buildings at the Baikonur cosmodrome, where the ship was in storage.

In some media you can find information that in fact there were two flights of “Buran”, but one was unsuccessful, therefore the information about it is classified. So, in particular, it is said that in the 1992 year from the Baikonur cosmodrome another launch vehicle similar to the “Buran” - “Baikal” was launched, but the engine failed in the first seconds of the flight. Automatics worked, the ship began to come back.

In fact, everything is explained very simply. In 1992, all work on the "Buran" was discontinued. As for the name, the ship originally bore the name “Baikal”, but the top Soviet leadership did not like it, which recommended changing it to a more sonorous one — the Buran. At least, G. Ponomarev, the commander of the engineering and testing department of the Baikonur cosmodrome, which was directly involved in the program, said so.

To date, disputes about whether “Buran” was needed at all, and why it was necessary to spend such a huge amount of funds for a project that is not even used now, have not subsided. But be that as it may, for that time it was a real breakthrough in space science, and even today it has not been possible to surpass it.