March 10 2018
143
Well, the hype about the speech of V.V. Putin's introduction of new types of weapons is gradually ending. The press "revealed all Russian military secrets", "the entire bluff of the Kremlin", "Putin’s struggle for the presidency for the next term." As much attention as was paid to this speech, not one of the speeches of modern politicians in the past few years caused, perhaps. 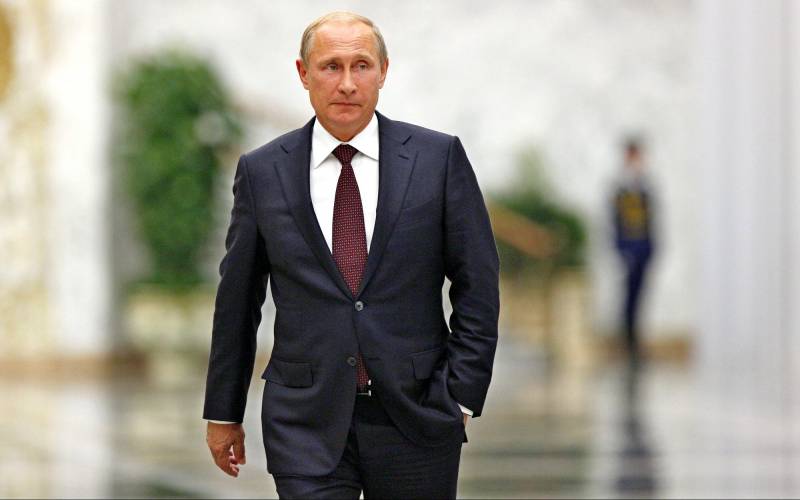 Talk about the performance of those weapons, which told Putin, I will not. Not because it is necessary to keep military and state secrets. Just really, the work was done in such secrecy that few know the reality. Even from the top leadership of the country. At least that was how it was possible to perceive their reaction to the words of Vladimir Vladimirovich.

So, Russia has ceased to catch up. But this is exactly what the USSR was doing. It was about this situation that quite recently almost everyone spoke. "In response to ... US, we will deploy our ...". Instead of a dot, you can insert any next weapon or initiative of the US or NATO in the military field.

Catching up is always harder than running away. Just because you are limited in maneuvering the actions of the evader. So, you spend much more manpower and resources to keep up with it completely. Although we cannot talk about the already forgotten arms race as uselessly spent forces and finances.

It was then that Russia received the shield that today reliably covers the country from the attack of the aggressor. It was then that many existing defensive systems were developed. It is on these systems that the development of Western design ideas today is oriented. Today we are reaping the fruits of the lost, in the opinion of some, the arms race.

I already wrote that in conditions when we are forced to “catch up” with the probable enemy, our not completely stable economy will inevitably lose to the West. We will be forced to spend more than we can and still lag behind. We are not ready to confront the consolidated West. And besides the shield, we also received a sword.

For the first time, Russia has become a runner-up from evading. Those systems that are named by the president are not so much for defense, but for retaliation. And if we discard the "peace-loving rhetoric", then for the attack. Now we can also "misinterpret" something.

I think among the readers there are those who have not forgotten the speech of US presidential candidate Hilary Clinton. Remember her warning in plain text? If Russia subjects the US to cyber attacks, then this should be perceived as a direct military invasion. And in these conditions, the United States has the right to attack Russia with all the means at its disposal.

At the same time, it never occurred to anyone that the "war in cyberspace" is virtual. And the evidence there can be cooked up a lot. Any evidence. And after the attack by military means and the destruction of the country who will understand? Winners are not judged. There are many examples of such actions even in recent decades. Yugoslavia, Libya, Iraq, Ukraine, if you like.

Let's look at what Putin said through the eyes of an ordinary soldier or officer. No matter which army of the world. We will see from the point of view of the possibility of opposing this weapon today.

Intercontinental ballistic missile RS-28 "Sarmat". With external similarities with its predecessors, this is a completely new type of rocket. Sophisticated systems of deception of the enemy's missile defense system, a huge range of flight, allowing you to attack from any direction, a large throw-in weight, allowing you to carry not only real warheads, but also false ones. And at the same time, a faster start, a higher flight speed and the ability to change course during the flight.

And now the conclusion of Western experts about the possibility of intercepting this rocket. For guaranteed interception "Sarmat" you need at least ... 500 antimissiles. The figure may be overstated in order to get new allocations for scientific research, but I do not think that much. And if you add to the "Sarmatian" already known glider U-71? Will the American missile defense cope with such a missile? It is doubtful.

Complex "Dagger". Many people remember sea-based missiles "Zircon". This is the brother of this aircraft carrier killer. Only at times great opportunities. Air basing practically makes the complex "omnivorous." The highest speed (12 000 km per hour), long range (2 000 km), the ability to maneuver makes the Dagger not just the AUG assassin, and without harm to the wearer (MiG-31 fighter), but also the assassin of objects far to the rear of the potential enemy.

But there is still a rocket "Avant-garde" with 20-multiple sound speed and the ability to change course. There is a nuclear-powered rocket, with virtually no range limitations. There is an unmanned nuclear submarine "Status-6" with a depth of immersion beyond 1000 meters and a speed that while nothing on the water moves. It is about this boat that is spoken of as a possible carrier of a hydrogen bomb capable of causing tsunamis in coastal areas.

Now a little about the "obvious-unbelievable." That everyone knows. About what "almost nobody knows". Think, can you name the Soviet or Russian weapons that would be exported abroad without the existence of much better weapons in our army?

And now from the recent past. Russia has concluded contracts for the supply of C-400 systems with some countries. In particular with Turkey. Similarly, with some other types of weapons. On the other hand, for some reason, we are not interested in exporting "Armatu" ...

It was the C-400 supplies that pushed Western experts to the idea of ​​the possibility of exporting the systems Putin was talking about. On the sidelines of NATO and the Pentagon are actively discussing this very thought. The thing is that the sale weapons really redraw all foreign policy in the world. The example of the DPRK showed everyone that with the presence of even a minimum of serious weapons, the "strong countries" start enuresis from fear for their own lives.

In the near future, we should expect speeches by American and NATO generals, in which this very thought will be voiced. Understanding that Russia will not do this in the near future is in the military circles of the West. But such a "scarecrow" for their own people and the government not to use would be a great folly. Money money money...

Today it should be recognized that the multibillion-dollar costs of the United States in the fight against products of the arms race that has sunk into oblivion, have been reduced to a minimum by Russia. All these AUG, European missile defense and other "gadgets" of Americans are almost crossed out by us. In the event of a real conflict, we will be able to face the American army on an equal footing. At least on equal terms.

The USA “yesterday” needs to install its own anti-missile shield on the continent. I will repeat the idea that has already been voiced repeatedly, the ocean has turned from an ally of the United States into an enemy. More precisely the oceans. Again, after the speech of Putin and a beautiful cartoon on the screen.

But, in my opinion, a completely different scenario is more likely. We do not need to sell anything. Until the moment when there will be systems that can withstand ours. It is enough just to have them. That's enough.

No matter how much our “European partners” can boast of their freedom and independence, most of them tend to have one, not very pleasant, but existing, quality. They readily move from one camp to another, betray their master allies, exactly at that moment when they realize that the enemy is stronger.

Exactly when the Europeans understand, as the Turks understood, for example, that all the talk about American invincibility is just talk, the mass "enlightenment" of European governments will begin. The first, those who come running to Moscow "at the head of the peloton", will get enough preferences. The rest will get miserable "leftovers". Oh, and the stampede will begin in the queue for admission to the Kremlin offices.

Thus, this year we should expect not only the easing of sanctions against Russia, but also the appearance of the first "defectors" in Europe. So, the change in the entire system of relations between countries. The US will be forced to reckon not only with the opinion of Russia, but also with the opinion of those countries that will go under its protection. Again there will be a rebirth of two at least opposing blocs.

The only thing that is not yet very clear is whether China agrees with the role of "head of the region" or enters into an alliance with one of the parties as a "junior partner" ... And the answer to the question I asked the readers a little higher is simple. By 2020, around Moscow, the X-NUMX battery of the C-4 “Prometheus” SAM system should be installed ...

Ctrl Enter
Noticed oshЫbku Highlight text and press. Ctrl + Enter
We are
Situational analysis of the death of the MH17 flight (Malaysian Boeing 777), made on the basis of engineering analysis from 15.08.2014Results of the week. “In our cooperative, the board is always agreed”
Military Reviewin Yandex News
Military Reviewin Google News
143 comments
Information
Dear reader, to leave comments on the publication, you must sign in.