Wroclaw City, bronze gnomes and diorama of the battle of Raczawica (part 2)

March 18 2018
97
On the subsequent events that followed these, the historian N.I. Kostomarov. in his monograph "The Last Years of the Commonwealth" reads: "Ygelstrom sent against the rebellious Madalinsky and the troops sticking to him General Denisov, who stopped in Skalmerzha, and sent a detachment to the enemy, under the command of Major General Tormasov. Reckoning that the enemy had a little more, Denisov gave Tormasov a small detachment, only two battalions and two infantry companies, six cavalry squadrons and a Cossack regiment. Kosciusko learned that Madalinsky was in danger, left Krakow and united with Madalinsky before reaching Tormasov before him. Brigade of Mangeta and Valevsky, Zayonchek with popular cavalry and 16 cannons were with Kostyushka. According to Russian news, with him were 7 battalions, 26 squadrons and 11 guns, and up to two thousand men with peaks and scythes. In addition to the troops, detachments of gentry from the ravish, Sieradz and Lenchitsky voivodeships came and were brought - young landless gentry, who had almost nothing to lose. . . 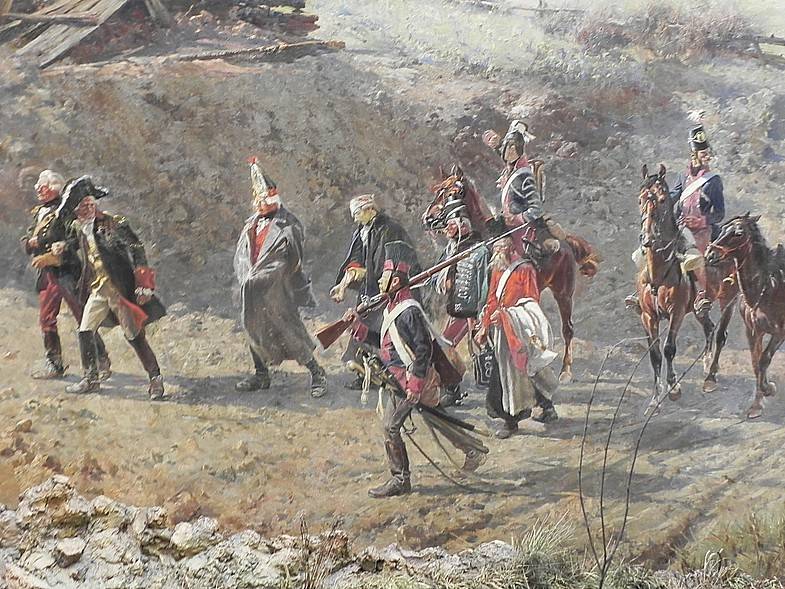 Hostile troops met at the village of Raczawica. The deep valley divided both troops. Tormasov made an attack. At first, things went well for the Russians. Folk cavalry could not stand the attack and fled. But Kostiushko, concentrating his forces, struck at the Russians; Cosineers rushed forward — flakes armed with braids; Russian troops turned out to be smaller, and it entered the valley, where it was inconvenient to turn around. Tormasov ordered to break into bayonets. But the Poles pressed them so hard that the Russians could not stand it. 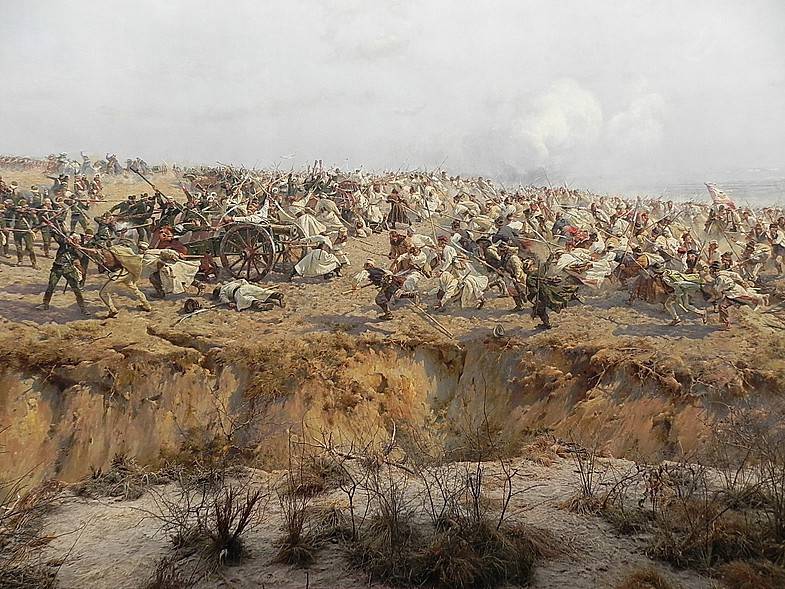 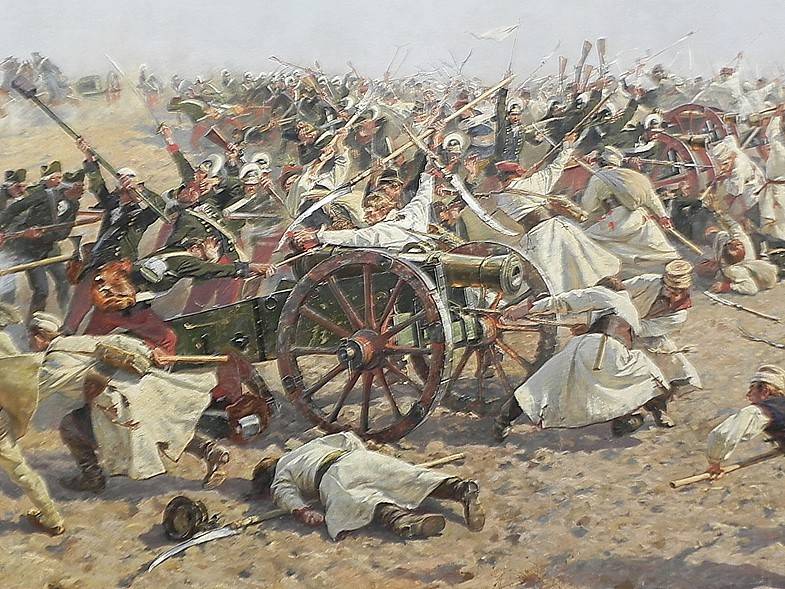 Fragment of the panorama. "Fight for guns." 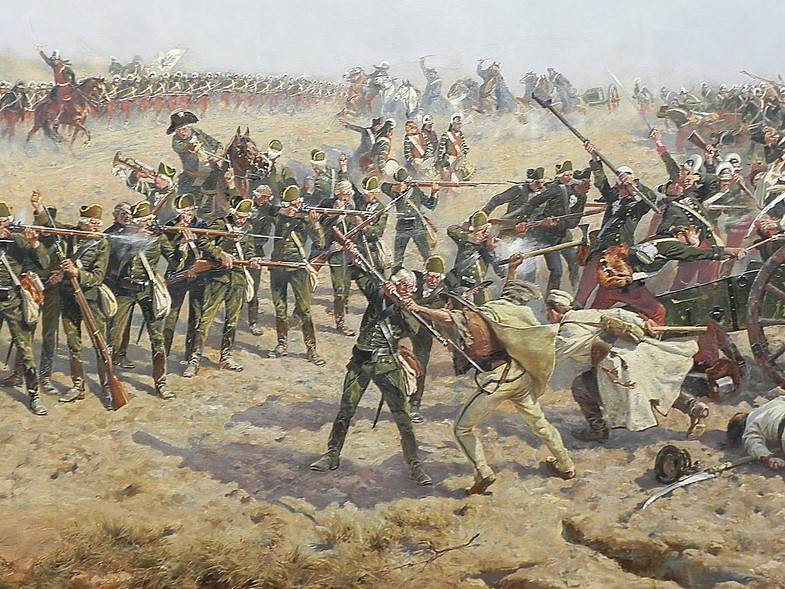 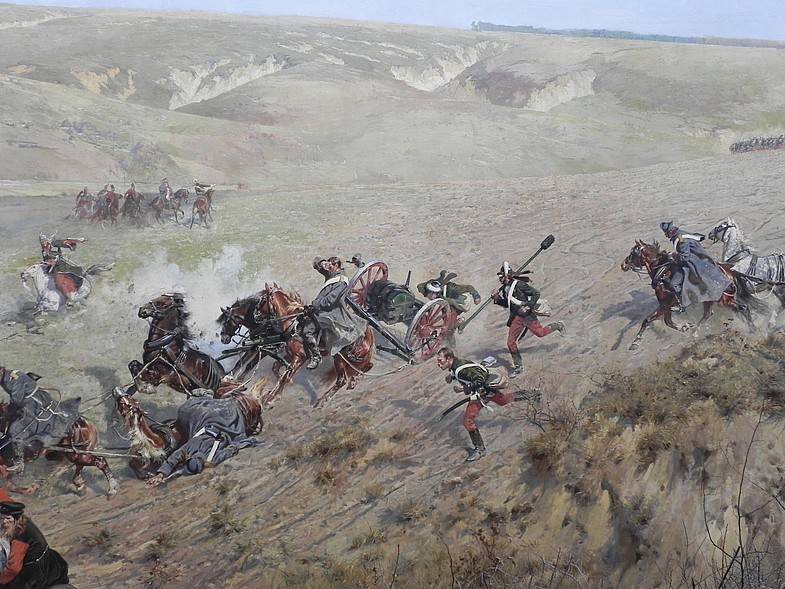 Diorama "Battle of Raczlawitz". Russian gunners are trying to divert the gun from the position. By the way, Tadeush Kostyushko wrote about the Russian artillery the following: “The corps of Russian artillery is usually numerous. The attack of the army corps is preceded by uninterrupted volleys of this artillery. Artillerymen shoot fairly quickly, but they are poorly controlled by fire, and they don’t target well with guns. ” One could not believe it - after all, the enemy writes, but at that time many of those who served in our army wrote about the poor state of the artillery of the Russian army. So it is not surprising that the Poles could not stop the volleys of Russian guns in this battle! 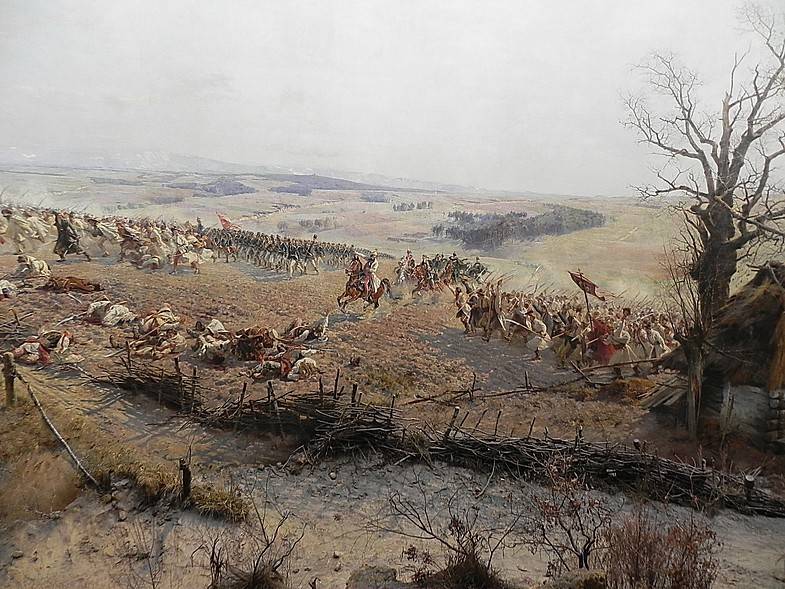 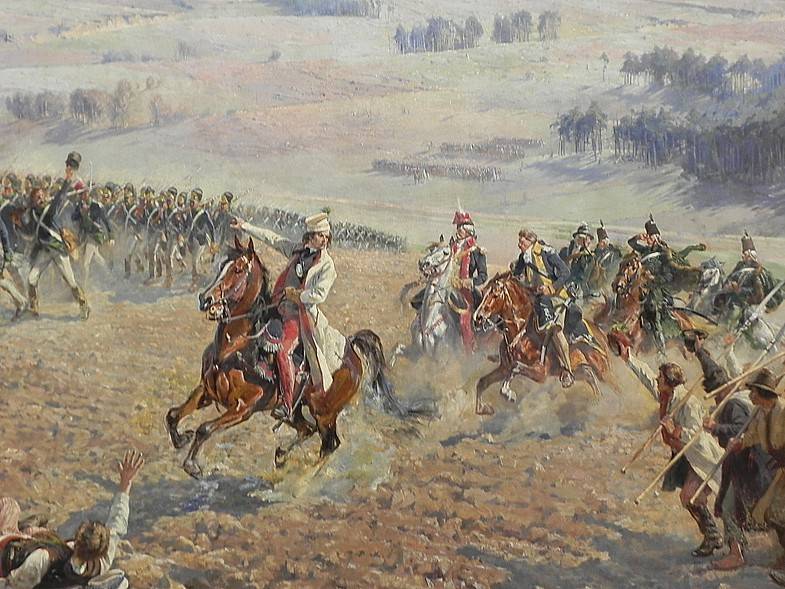 Fragment of the panorama. Tadeusz Kosciusko, in the a la man guy, heads the attacking trainers.

First ran the grenadier battalion of Count Tomatis, abandoning his gun. Tormasov moved a regiment of the Uglitsky regiment into the company, but this company followed the example of its comrades and, abandoning its rifles, fled. The third battalion held out more than the others, but at last it was mixed and ran into the forest. Colonel Muromtsev with four squadrons rushed to the enemy's cavalry, but was killed. Russian guns went to the winners. The Russians numbered killed: two staff officers, ten chief officers and privates 425. Among those killed, besides Muromtsev, was another staff officer, Lieutenant Colonel Pustovalov, who was previously distinguished by his bravery. Kostiushko of two claps made an officer for the courage shown in the capture of Russian guns. 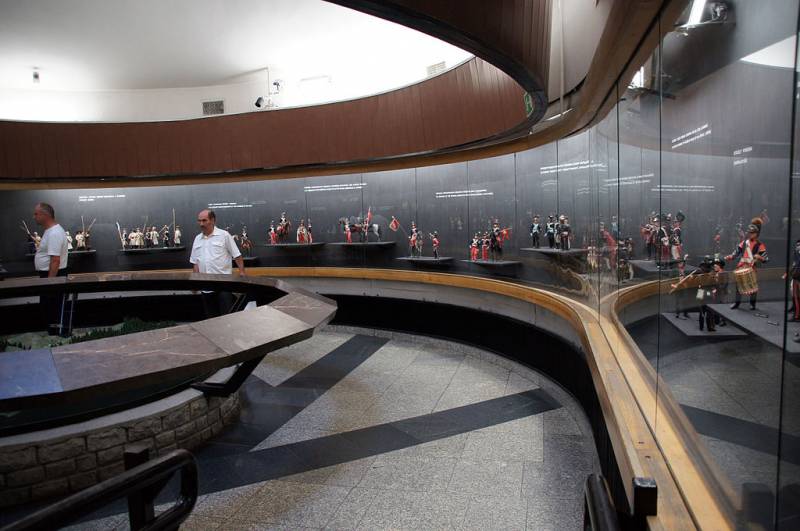 And this is a “small panorama”. In the center of the layout of the battlefield, and around the perimeter of the figure in the uniforms of the battle.

Denisov, meanwhile, was in a hurry to help Tormasov, but it was too late. Kosciuszko, defeating the Russians, retreated and became in a fortified camp near Promnik, not far from Krakow. ” (Kostomarov N.I. Last years of the Commonwealth. Historical monograph. - 2nd ed. - SPb., 1870. - SS. 708-709.) Such was the description of the battle of Raclawice - one of the first battles during the uprising of Tadeusz Kosciuszko against the Russian Empire. It happened on April 4, 1794 near the village of Raclawice in the Lesser Poland Voivodeship. 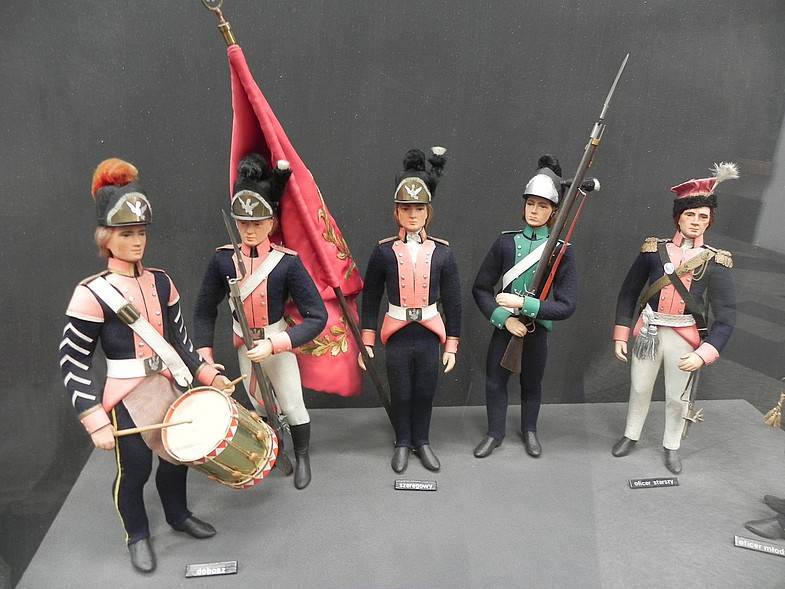 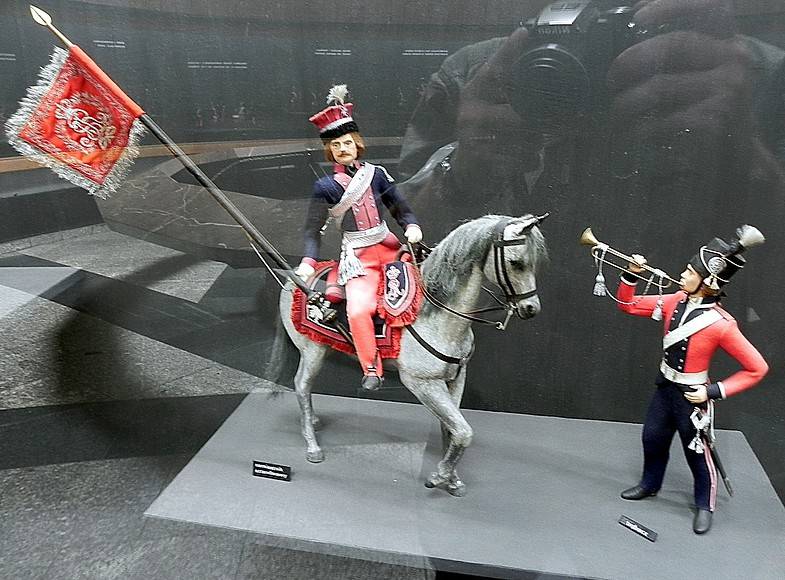 Polish cavalry in 1794 uniforms of the year.

In addition, the Małopolskie Voivodeship was able to put 11 cannons and 2000 peasants to the insurgents, armed with peaks that were transformed into peaks (the so-called “cosiniers”), who had a decisive role in this battle. 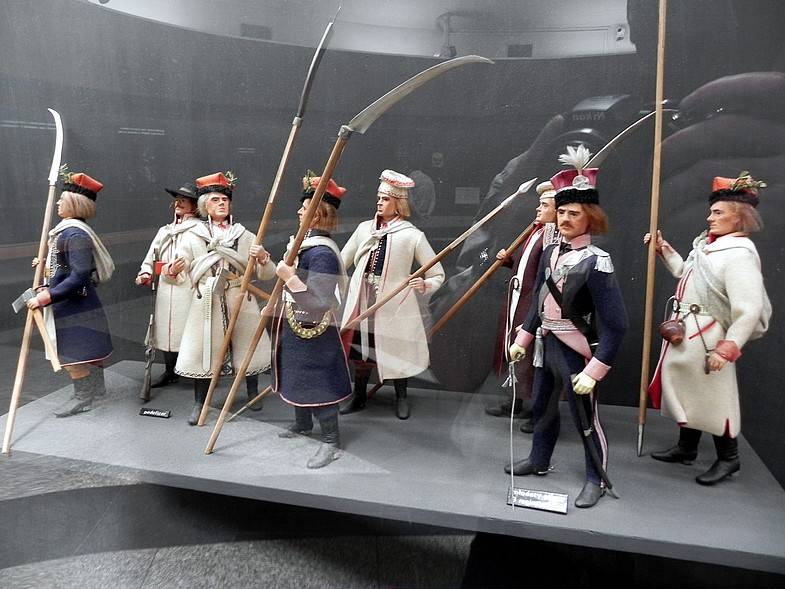 Carpenter claps in their traditional Jupana. 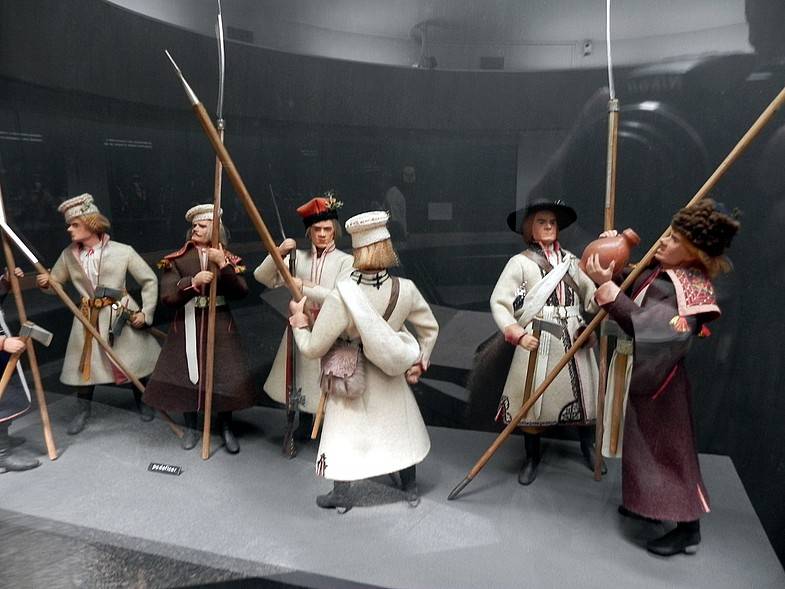 And this, too, they. Some are shown in a very funny way, aren’t they?

Unfortunately, the exact description of this fight does not exist. Descriptions of different authors sometimes differ quite significantly. However, in general, we can restore its course approximately as follows. First of all, it should be noted that General Tormasov, meeting with the enemy and having at his disposal considerable forces, superior to the forces of the enemy, attacked the Polish troops, turning to them in front. Russian troops attacked the traditional closed ranks, lining up in a line, shoulder to shoulder, in several rows. That is, everything was done in the best traditions of the linear tactics of the Prussian military school of Frederick II. This system made it possible to conduct on the enemy frequent and effective fire, when the first rank gave a volley from the knee, and the second over the heads of the first. The disadvantage of such a triple system was its poor maneuverability and dependence on the terrain. 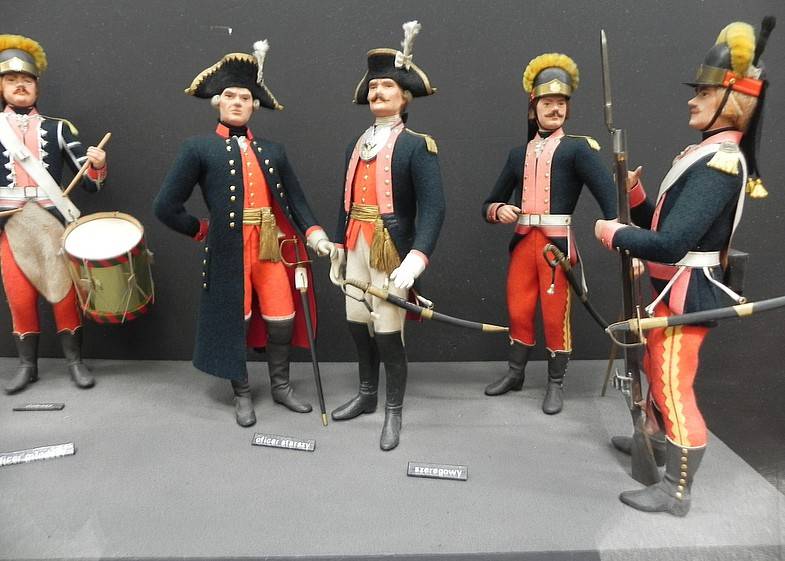 Well, these are Russian soldiers in the famous “Potemkin uniform”.

Meanwhile, Tadeusz Kosciuszko, who participated in the War of Independence 1775 — 1783, had more advanced tactics. His soldiers, like the Americans in clashes with the British, fired at the enemy, applying to the terrain, using natural shelters. While there was a firefight, the detachments of men-makers, whom Kostyushko personally commanded, were able to quietly bypass the positions of the Russian detachment and were in his rear. Tormasov did not notice this, and when the makers went on the attack it was already too late. The attack of the trainers was so rapid that they managed to capture all the Russian guns and thereby forced the Russian troops to flee from the battlefield. But, although this was a victory, Kostiushko’s forces were still too small compared with the forces of the Russian army to decide to pursue the Tormasov detachment, so that the Russian troops, after the defeat suffered, could continue their actions in the Malopolska province. 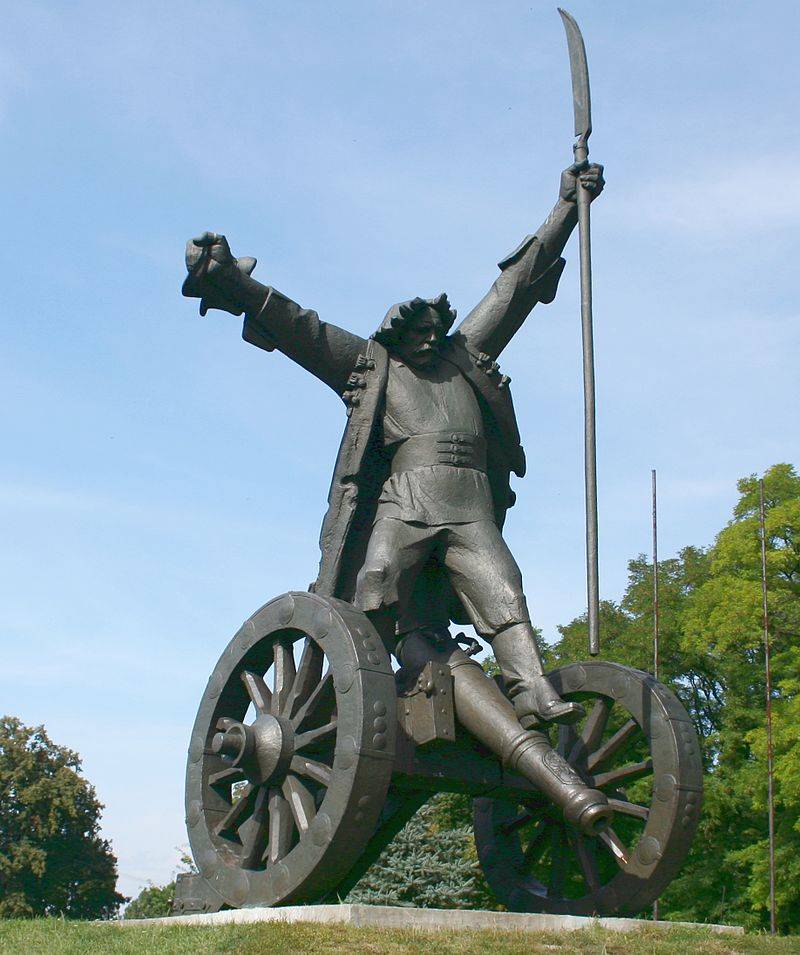 The monument to Bartosh Glovatsky, who managed to rivet one of the Russian guns.

That is, the victory at Racławice represented only a tactical success, although it contributed to raising the morale of the rebels. After him, they were joined by the majority of the Polish lands, as well as by Lithuania and Courland, after which the uprising began in Warsaw itself. It forced Russian troops to leave the city on April 17. Well, after the battle, Kosciusko noted the peasant volunteers who distinguished themselves in it, who were given the rank of cornet for their valor. And in honor of the victory in Warsaw at the parade, the kosyneri passed in their national clothes of the small peasants, that is, in the sukmanas, which were long-haired homespun kaftans. One of the serfs who participated in the battle, Bartosh Glovatsky, who riveted a Russian cannon, later became a national hero of Poland. 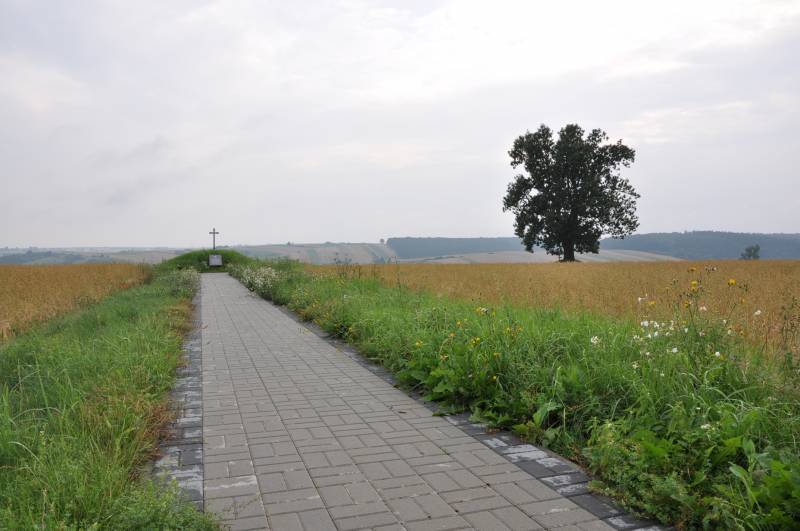 In the place of this battle today there are monuments everywhere ... Well, I want the small people of a small state of "great victories" over a strong neighbor. Let not now, at least in the past.

By the way, it is interesting that the caps of the “Confederate” that the troops wore during the days of this Polish uprising, and the two crossed braids during the Second World War became the emblem of the Polish 303 fighter squadron.

However, I already learned about the squadron later, and it was then that time was already pressing for me very strongly. Although three museums turned out to be right next to the diorama building: the National, Technical and Architecture Museum, and also a monument to the victims of the UPA, which I would also like to look at. But time was running out. Therefore, I looked at the map and went, and went very quickly. A glance noted how many language centers in Wroclaw, all sorts of “delicious eateries” and restaurants, there are very few foreign tourists on the streets (not at all, for example, what can be seen in Prague), really incredible cleanliness on the streets and universally new tiled roofs ... 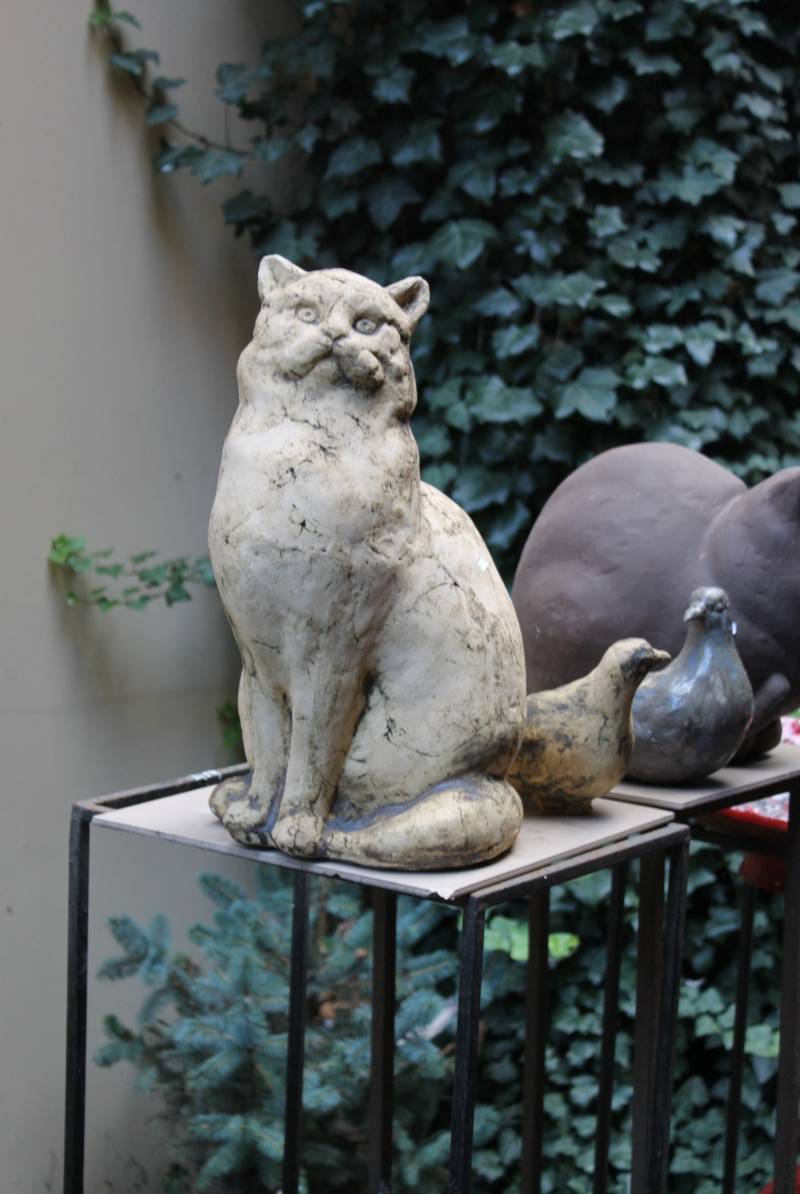 Photographing at this speed was especially no time. But this stone cat was not impossible to capture. I hope that lovers of cats and cats, which are quite a lot on HE, will like it. It is worth it in some alley and it seems even for sale ...

To the rendezvous point - a taxi stand near the Opera House, I approached exactly one minute. I couldn’t just take a lot of things, but “my women” managed to take a whole series of photos. 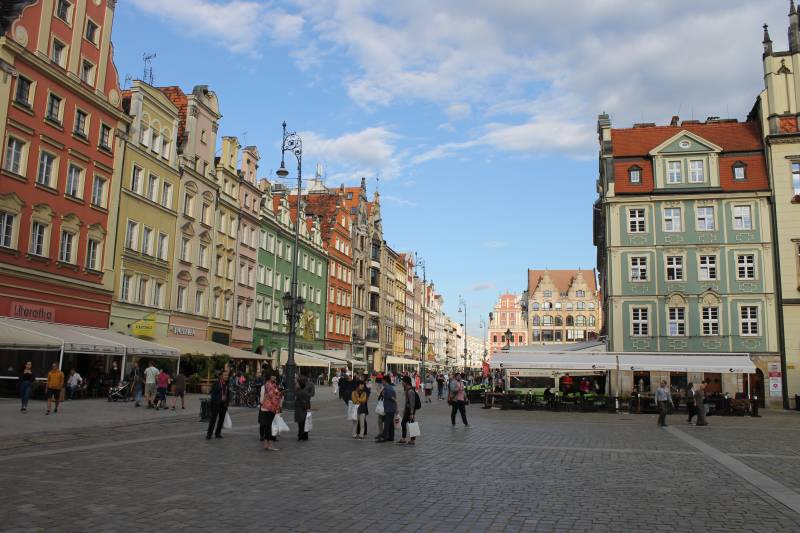 For example, a photo of this street. At home, it’s just like a toy or from a fairy tale about a princess and a flint. 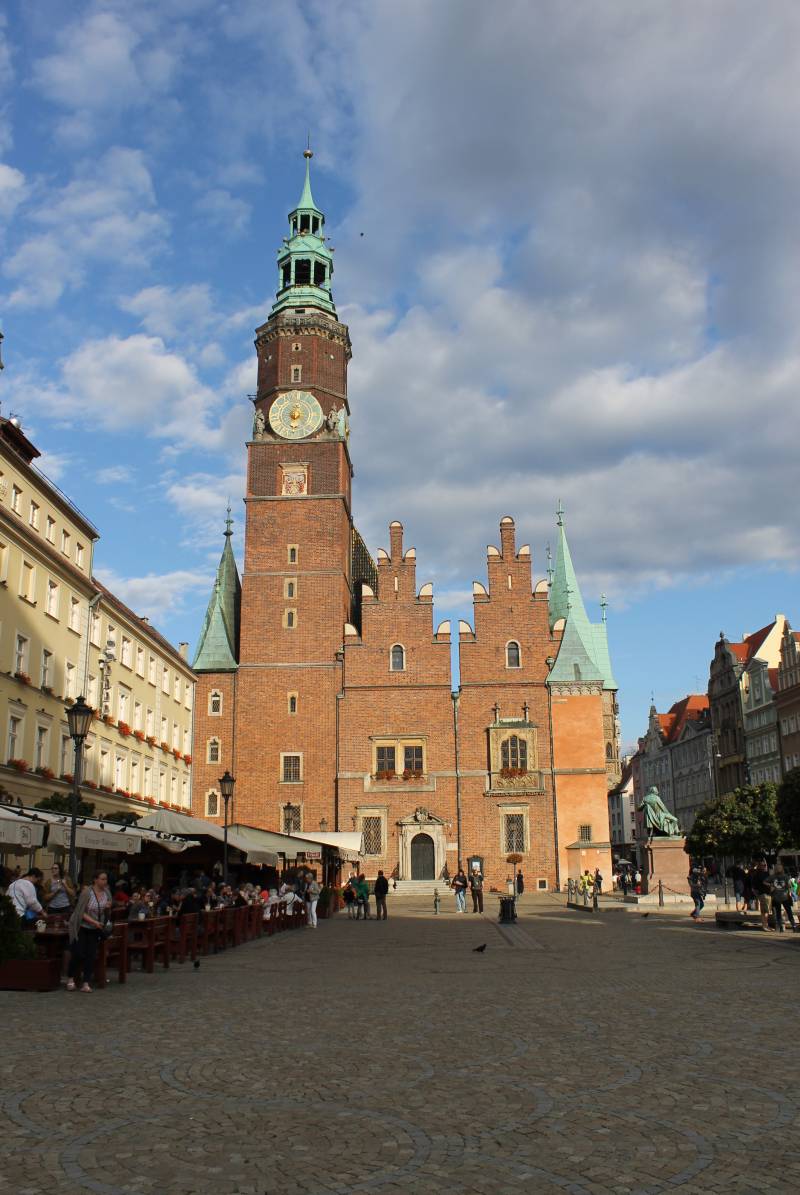 Well, this clock tower belongs to the old town hall. They appeared on it in 1550 year. 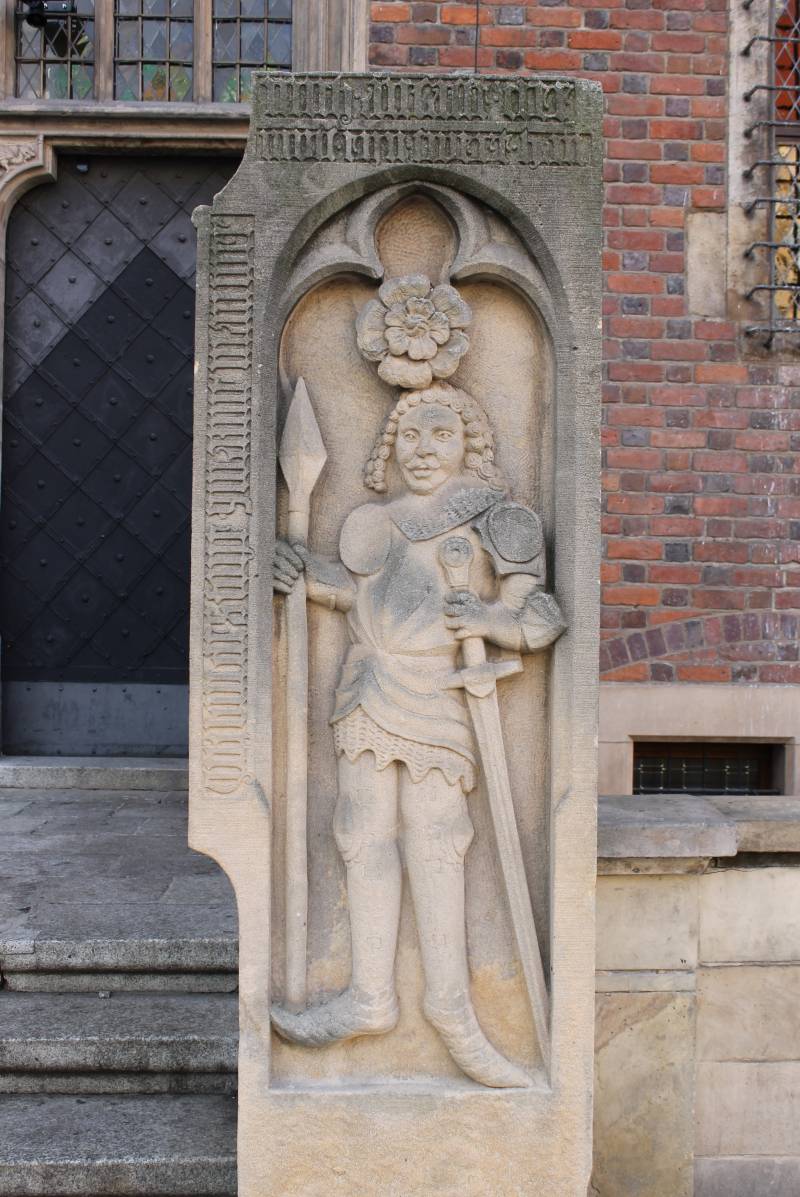 Here was a museum in front of which this effigy stood, which they specially photographed for me. But what kind of museum it is and who owns this effigy I never knew.

We will have to visit Wroclaw again ...