Ukrainian trace in the "Afrin slaughter". Merged Ankara project of the system "Rain" will change the balance of power in Syria 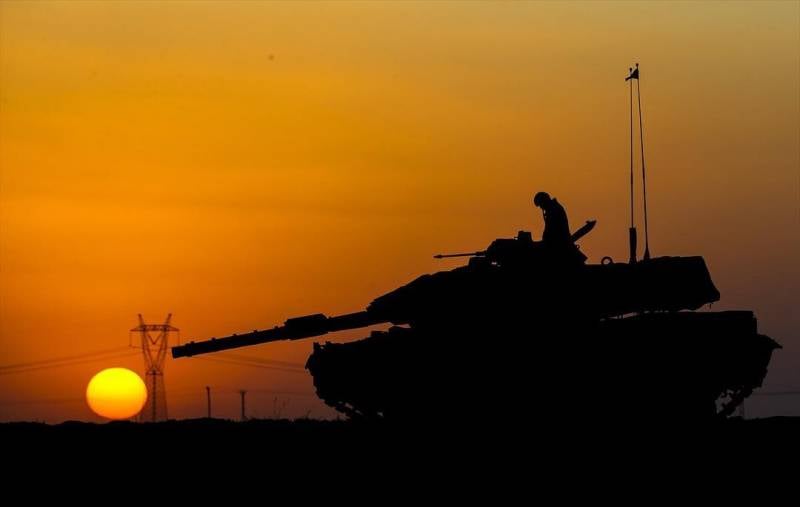 While the leading Western European and Russian analytical agencies are focused on covering the situation in Eastern Ghouta, where the Tiger Forces, contrary to the hysterical scream of the American, French and British establishment, are conducting a successful offensive operation against the militants of al-Nusra and the Free Syrian Army under tactical support aviation The Russian Aerospace Forces, events no less decisive for the Syrian Arab Republic are taking place in the Kurdish canton of Afrin. Despite the fact that these lands of Aleppo province are exclusively under the sovereignty of Syria, both the Turkish Armed Forces are trying to gain comprehensive control over them during the bloody Operation Olive Branch and the US Armed Forces, relying on the "slipping" of the 5th assault corps SAA. And it seems that Ankara has absolutely no intention of waiting for an attempt to transfer the SDF to Afrin, reinforced by the state marines or the Syrian Arab Army, and therefore decided to force the operation by selectively modernizing the advanced tank units that entered Syrian territory from the direction of the Hatay and Kilis silts.

We are talking about equipping Turkish main battle tanks M60T "Sabra Mk1 / 2" with an integrated modular active protection complex "Akkor Pulat" ("White-hot steel"). According to the information of the armyrecognition.com publication referring to the Twitter page of the Deputy Minister of Defense Industry of Turkey Ismail Demir, KAZ Akkor Pulat passed all stages of fire tests and is ready to be adopted by the Turkish Armed Forces in the near future. Obviously, the Turkish General Staff, taught by the bitter experience of using the Leopard-2A4 and Sabra tanks on Afrin’s difficult elevated relief (with the overwhelming superiority of the anti-tank complexes at the disposal of the YPG / YPJ Popular Self-Defense Forces), decided to fundamentally turn the tide.

The Akkor Pulat active protection complex was developed by the Turkish military-industrial giant Aselsan, which is also known for designing and fine-tuning such high-tech products like the Koeral multi-element mobile complex and the AselPOD optical-electronic reconnaissance and target designation navigation container designed to equip transitional fighter jets. Nevertheless, the Turkish company founded in 1975 year has a much lower scientific and technical potential than the Tula Instrument Engineering Design Bureau JSC (KAZ Arena) or Israeli companies Rafael and IAI (KAZ Trophy) and therefore could not develop the “Hot Steel” only on its own constructive and element base. As a result, the Turkish specialists decided almost in the literal sense of the word to copy the project of the Ukrainian complex of active protection "Zaslon-L", which is licensed under the name "Hornet" in Poland. Moreover, it is known that specialists of the state enterprise BCT “Microtech” were involved in the programmatic adaptation of the complex for the Turkish tank information and control systems, an agreement on which, apparently, was reached after Erdogan’s October visit to the Square. That is why the complex acquired operational combat readiness unusually quickly.

But what is the Akkor Pulat active protection complex capable of not in video presentations and PDF presentations on the official pages of the manufacturer and resources close to the Turkish Defense Ministry, but on the Syrian theater of operations, taking into account all its complexity and abundance of PT-vehicles with different flight paths ?

In order to more accurately answer this question, it is necessary to immediately determine the type of complex that is being prepared for entering the Turkish troops. Back in 2015, there was a mass news posts regarding the development by the company "Aselsan" of the KAZ "Akkor". This product is fundamentally different from the Ukrainian KAZ "Zaslon-L", and hence "Akkor Pulat". Akkor is built on a completely different radar and firing architecture. In particular, to detect ATGMs, anti-tank grenades or tank guided missiles, a 4-sided radar with active phased or slotted antenna arrays with an azimuth and elevation angle of about 90 degrees is used for each radar module responsible for the front, rear and lateral hemispheres. respectively. The radar operates in the high-precision Ka-band at frequencies up to 40 GHz, which makes it possible to follow the approaching high-precision elements with an accuracy of several centimeters. weapons at a distance of three tens of meters.

As a means of destroying the enemy’s missiles, small-sized unguided interceptor shells launched from twin-type swiveling turret launchers of an inclined type are used. Interceptor shells are equipped with a radar fuse, an annular antenna array which forms a radiation pattern perpendicular to the longitudinal axis of the anti-projectile. The fuse is triggered when the interceptor projectile turns out to be side by side with the enemy’s attacking ATGM at a distance of several tens of centimeters. The advantage of Akkor KAZ is the ability of the radar antenna modules to be positioned at an angle of 45 degrees to the normal, which makes it possible to bring the scanning beam angle to 90 degrees, which can destroy rockets attacking in the slide mode, in particular, FGM-148 “Javelin ". Allows you to do this and an inclined turret.

The nominal “Akkor” operating range in the elevation plane (without turning the antennas) is from –5 to + 45 degrees. The principle of operation of “Akkor” is similar to the Israeli complex “Hetz Dorban” (“Iron Fist”), or the South Korean KAPS (“Korean Active Protection System”), designed to equip Black Panther type K2 tanks. Due to the high accuracy of the radar there is the possibility of intercepting artillery shells, while modern armor-piercing feathered sub-caliber shells cannot be destroyed due to the high speed of approach (more than 1450 m / s) and the absence of complex structural elements (besides a heavy-duty uranium or tungsten core). For covert operation in standby mode, it is possible to synchronize with an infrared longwave or UV sensor that detects the torch of the launched ATGM in a passive mode at a distance of several kilometers (in this case, the anti-projectile radar is activated only when the attacking missile is approached for as long as possible to hide the location of the tank from enemy funds RTR)

However, the more advanced and complex Akkor complex can be found only in the form of mock-ups on product presentations from Aselsan, or in video presentations on YouTube, while real fire tests never reached from the Korean KAPS).

Let us return to the consideration of the analogue of the Ukrainian KAZ “Zaslon-L” - the Turkish complex “Akkor Pulat”, which, due to the simplicity of the design and the corresponding principle of operation, the specialists from “Aselsan” managed to repeat in a fairly short time. We also recall that “Zaslon-M” is not a development of the Ukrainian “Microtech”, but refers to the Soviet achievements of the All-Russian Research Institute of Transport Engineering under the “Rain” project. Before us is the separated architecture of 4 autonomous single or twin combat modules that are built into the side projections of the fore and aft parts of the unit. Each combat module is represented by a compartment with avionics and a multiplex data bus for integration into the TIUS (tank information management system) and obtaining data on the approach of an anti-tank missile of the enemy. After that, the anti-projectile bar (depending on the customer’s requirements there may be two units) is put forward from the combat module. When various means of high-precision weapons fall into the main lobe of the radiation pattern of the RL sensor, the command is sent to undermine the combat "equipment" and the bar breaks into thousands of high-speed metal fragments, which hit the enemy’s missiles at speeds exceeding the speed of sound.

Notably, despite the simplicity of the design, the Akkor Pulat complex is simply unique and makes it possible to withstand even armor-piercing sub-caliber shells with a flying speed of more than 1500 m / s, which was confirmed during firing tests of the similar Ukrainian Barrier-L still in 2009 year. The counter-equipment “equipment” of the complex allowed the destruction of the BOPS ЗБМ-22 “Pin”, the initial speed of which can reach 1760 m / s. The large disc-shaped sector of fragmentation and a large mass of explosive compensate for the low accuracy of the complex, but also pose a great threat to infantry and unarmored friendly vehicles, located a few dozen meters from a tank or BMP equipped with Akkor Pulat modules. 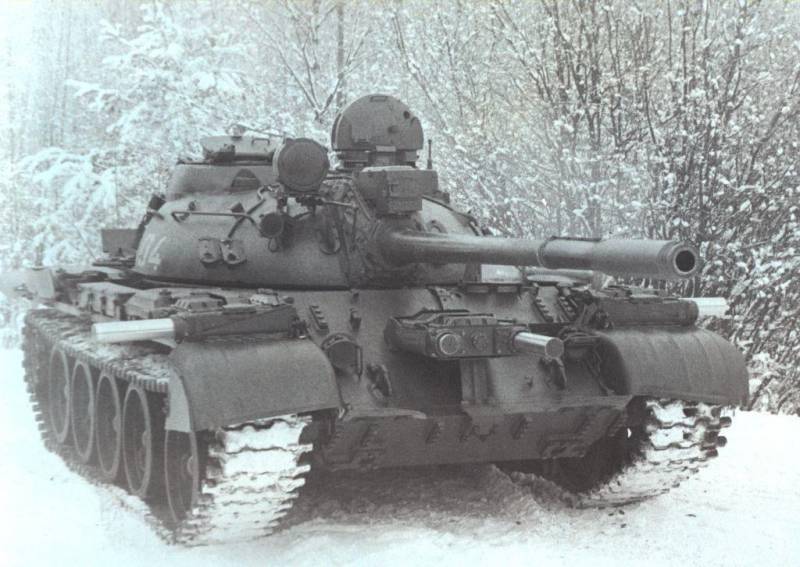 It is necessary to recognize that the documentation transferred to the Turks on the projects “Zaslon-L” and “Rain” can make very serious operational and tactical corrections in the layout of the Afrin theater of operations, and the Kurdish YPG troops, as well as the Syrian militia from the National Defense Forces and Hezbollah will have to look for a way out of the current situation, because KAZ Akkor Pulat is able to destroy any anti-tank weapons (from Konkursov-M to Metisov-M) approaching the tank units of the Turkish ground forces.

But the “window” of opportunities for the Afrinsky Kurds still remains, because the Turks have not yet distinguished themselves with special ingenuity in the procedure of installing single Akkor Pulat modules on M60T “Sabra Mk2” tanks. The demonstration sketch from “Aselsan” provided by military-analytical resource militaryparitet.com with reference to the Council for Scientific and Technological Research of Turkey TUBITAK, you can see the modules of the complex “Akkor Pulat” that are not neatly embedded under the anti-cumulative screens and “wings” of the corps “ Sabra ", but just lie on the upper surfaces of the tank. This suggests that the modules are extremely vulnerable to heavy fire of Kurds from large-caliber small arms. The open arrangement of the modules will lead to their disabling at the first aimed shooting from 12,7-mm machine guns, which are in service with the defenders of Afrin with an excess.

The next point is that due to the compactness of the Sabra tanks (this applies to the entire M60 family), Aselsan focused on the single module version of the KAZ Akkor Pulat, and therefore for the front and rear projection the tank is responsible only for one “explosive” bar, and for covering the side projections - two similar retractable rods. As a result, for the full development of the KAZ Akkor Pulat ammunition at least one projection of the 1-2 blast, the PG-7В grenades aimed at it, after which you can safely use your favorite Kontrius-M or TOW-2A / B. Moreover, if the Ukrainian version of Zaslon-L provides for placing the 5 module on the tower’s roof, which covers the tank from ATGMs attacking from the upper hemisphere (Javelin and Spike-MR), then Turkish Aselsan moment did not provide, which also gives food for thought.

Ctrl Enter
Noticed oshЫbku Highlight text and press. Ctrl + Enter
We are
A coalition led by the United States is preparing a hybrid strike on Syria. "Green berets" seen in the "el-Babskiy bridgehead"Situational analysis of the death of the MH17 flight (Malaysian Boeing 777), made on the basis of engineering analysis from 15.08.2014
Military Reviewin Yandex News
Military Reviewin Google News
39 comments
Information
Dear reader, to leave comments on the publication, you must sign in.