Locks of Perigord, one after the other ... (part three)

March 16 2018
76
So we finally got to the castle of the opponents of the lords of Castelnau, the castle of Beynac. The place where he stands is a high limestone rock about a hundred meters in height, clearly indicates its attractiveness. Remember the Russian folk tale: “I stand tall, I look away!” Everything was exactly the same here. Archaeologists say that people settled here in the Bronze Age, which is not surprising. Tourist brochures report that Beynak can be called the most impressive fortress throughout the valley of the Dordogne River, and if this is an exaggeration, it is very small. 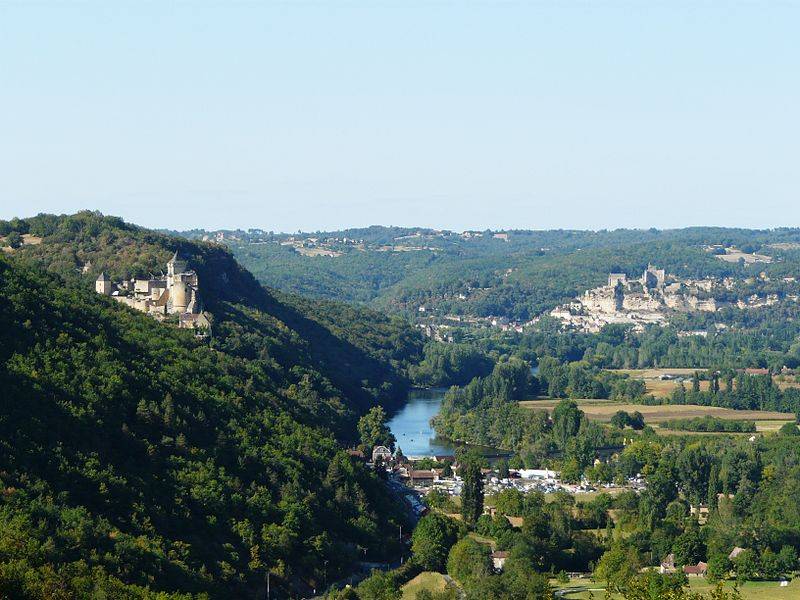 Two strongholds - everything is just like in Tolkien: the castle of Castelnau is on the left, Beynak is right afar. 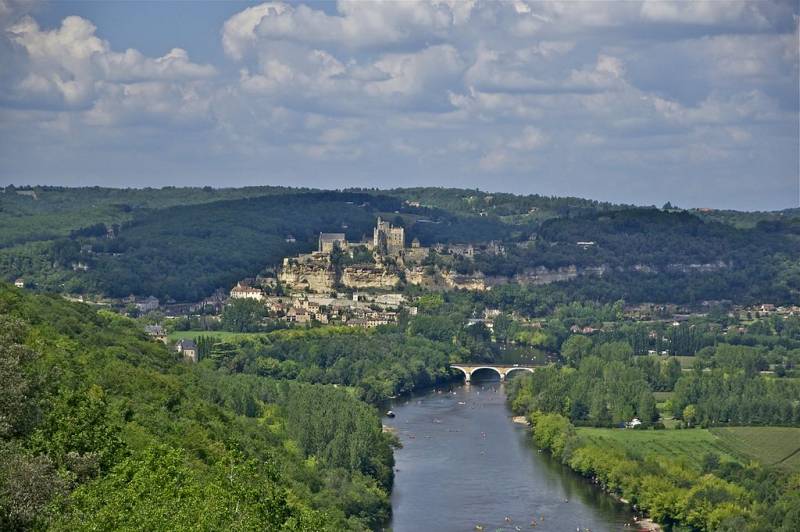 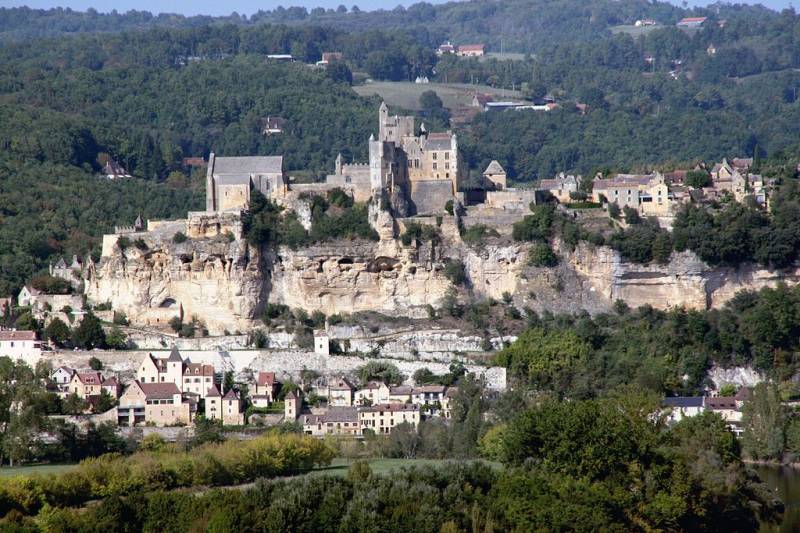 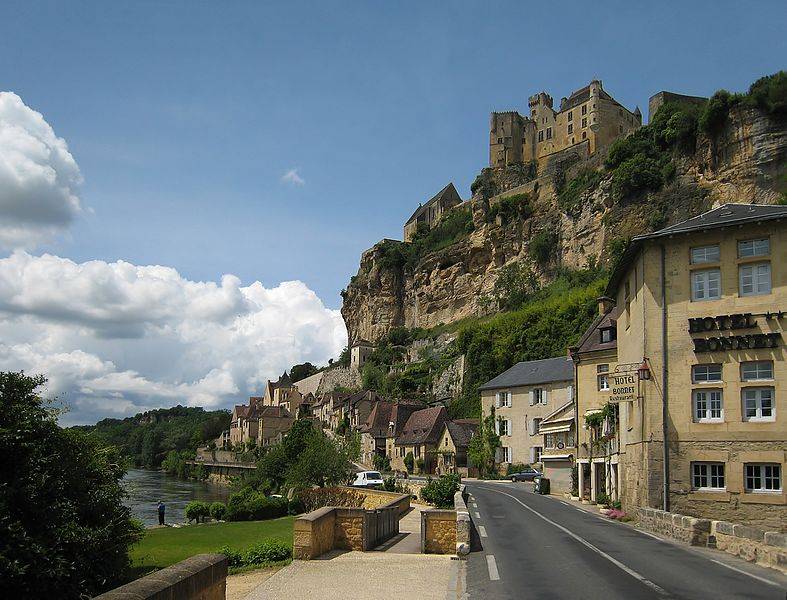 And here we are on the road going at its foot. You can stay at the Hotel Bonn (on the right).

It is known that the name of this castle was first mentioned in 1115 documents of the year, due to the fact that local Perigord feudal lords, among whom was a certain Meinar de Beynac, donated obviously serve him as a godly man. Here, and at about the same time, in a dense forest, that is, away from worldly temptations, another monastery was founded - Kaduin. And he, too, was given the land, and the acts of donation are reflected in the monastery’s cardiarias, and it is clear from them that the land holdings of the de Beynac family were not affected by this, since they were very large. 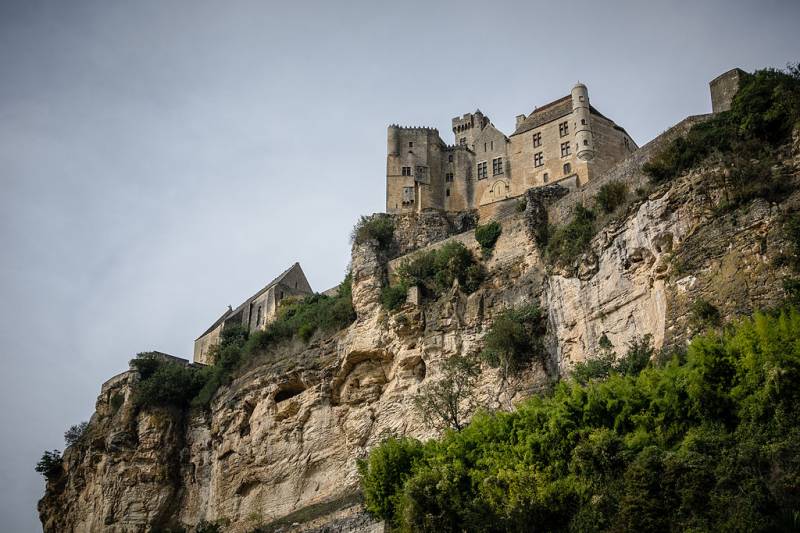 It is unlikely that there will be a person in his right mind who will climb the castle by storm over these cliffs!

But by the will of fate it turned out that the son of Meinar de Beynak, Ademar, who took part in the second crusade from 1146 to 1148, died and did not leave a direct heir. And it happened in the very year 1194, when King Richard the Lionheart returned from captivity. 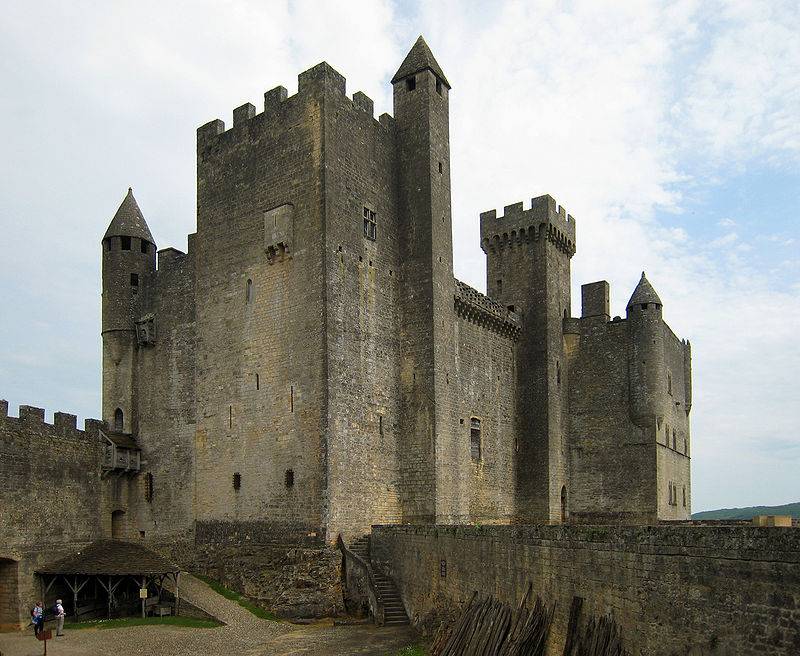 Usually at this time they preferred to build towers with round ones, since in this way they were better able to resist the blows of throwing machine nuclei. But here we see square towers. Pay attention to the loopholes in their walls and toilet cubicles. On the left is one of the entrances to the castle. Above him is a wooden "booth" for the guard. 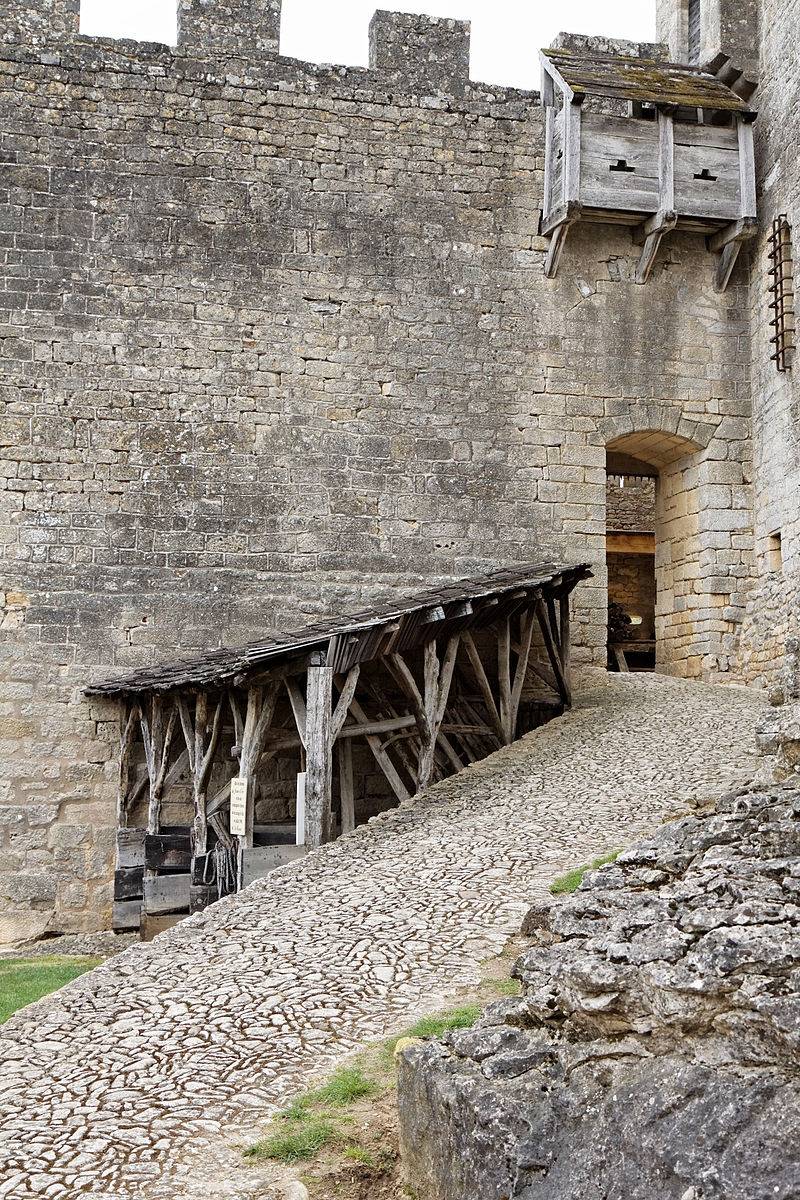 Here it is this "booth." Right above the entrance. Holes were made in the floor to throw stones down. 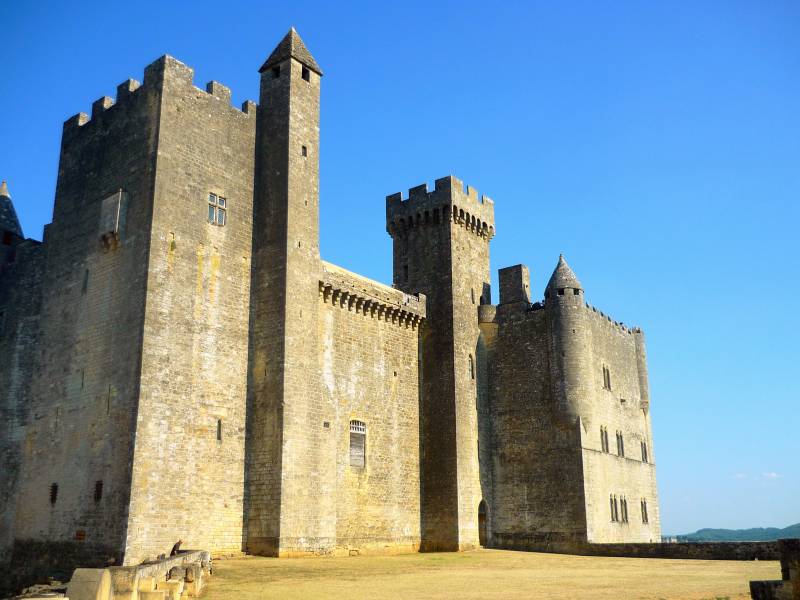 "Square" in front of the castle. On the walls and towers there are stone machiks for the same purpose.

Naturally, such a fortress as Beynak could not be left unsupervised, in the sense of the absence of her husband who was loyal to you, and Richard the Lion Heart presented Bainak to his follower Mercadier, who in his absence controlled the locks of Aquitaine. He was delighted with the gift, but he did not enjoy the property for long, as in 1200, Merkadier was killed in Bordeaux by another mercenary, and the castle again returned to the family of de Beynac, now to the nephews of the aforementioned Ademar. 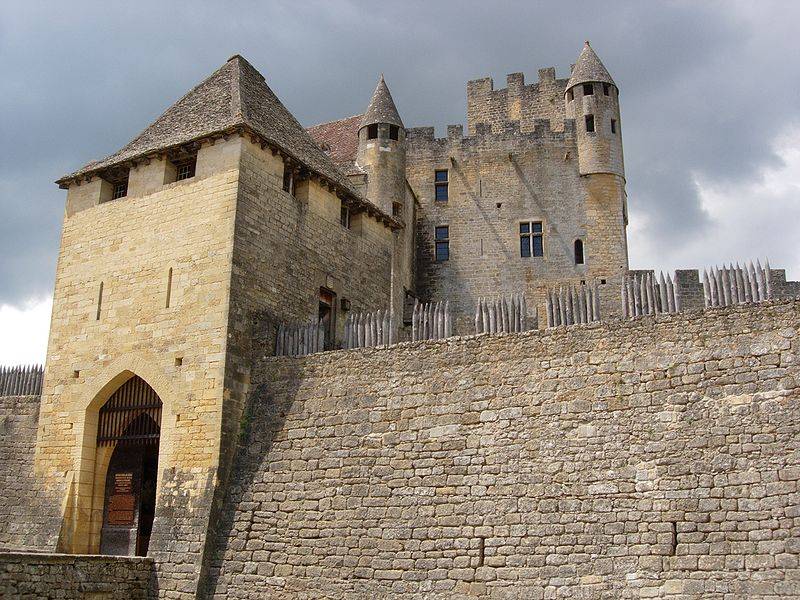 Entrance tower, protected by a moat and a lowered grating. 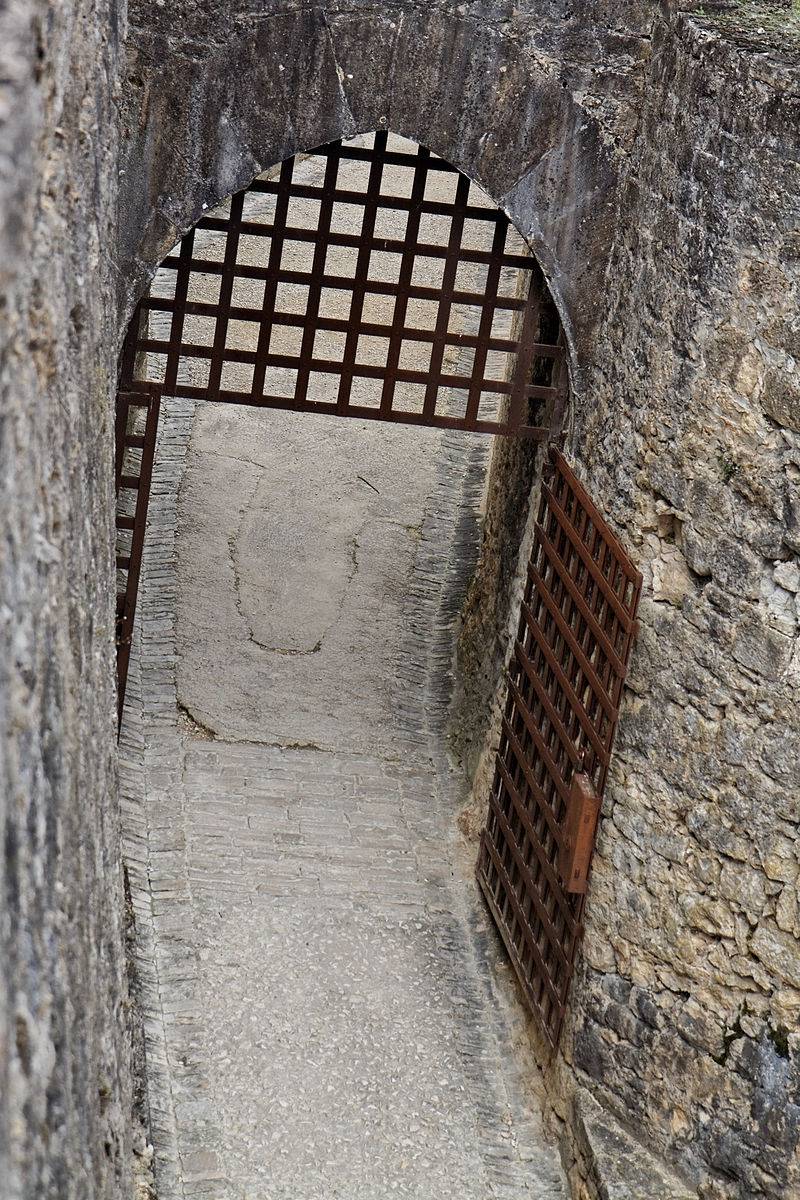 One of the many inputs and outputs. 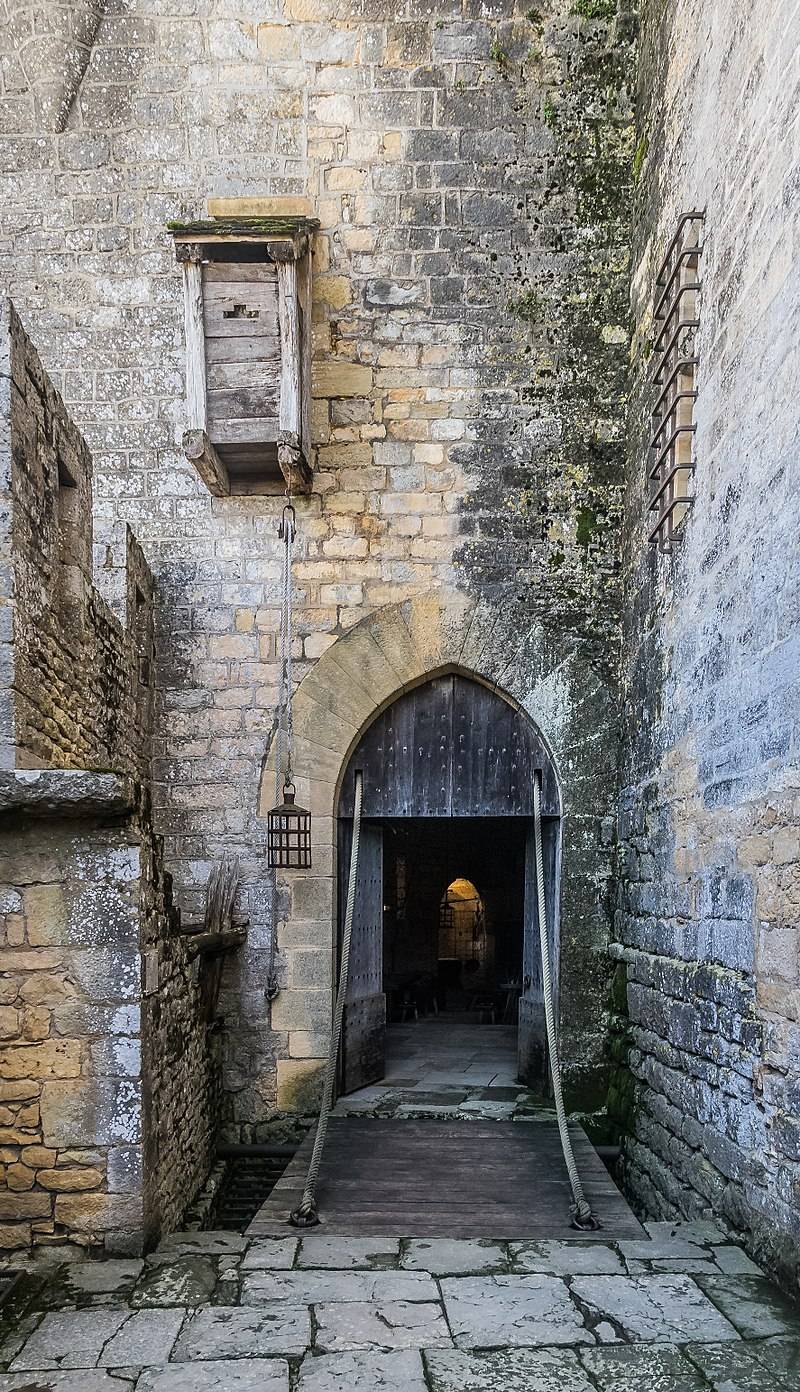 Here the entrance to the castle closed suspension bridge. On the left is a guard booth and a lamp hanging under it.

Not so much time has passed since the sadly glorified Simon de Montfort appeared in the Dordogne valley, who came here in September 1214 to eradicate the Qatari heresy. He captured the castles of Montfort, Domme and Castelnos, which were nearest to Beynak, and finally came under his walls. Moreover, according to the chroniclers, the castle at that time belonged to the “cruel, violent robber and oppressor of the church.” That is, the owner of the castle was ranked among the Cathars. The castle was stormed, half destroyed, but the Beynaki returned it after a year, and all the people of de Montfort, whom he had left in it, were exterminated. It would seem that there is a serious violation of feudal obligations, in essence, a revolt against the king. However, the king of France for some reason supported Beynakov, and the castle remained to belong to their family. In addition, after this event, as the chronicles say, the de Beynac family finally learned the joys of wealth and a peaceful life. So religion here, most likely, had nothing to do with it. I liked the castle and the land, for it is known that a strong man is always powerless to blame. So it was probably in this case. 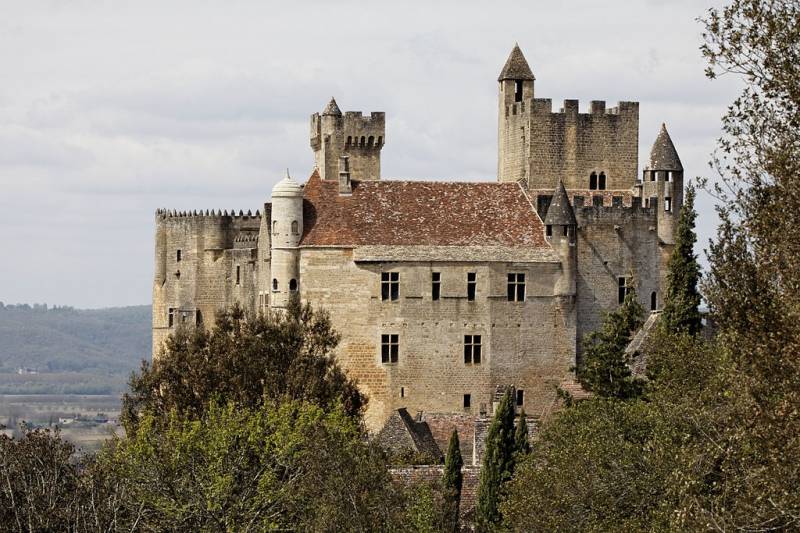 As you can see, the castle from all sides had many viewing towers. So getting close to him unnoticed was not at all easy.

In 1241, the Beynac county, where another castle stood - Commark, was shared by two brothers: Geyard and Maynard de Beynac. But in 1379, the scattered possessions were once again united into one thing - family matters are sometimes inscrutable.

The owners of the castle and the lands surrounding it were vassals of Bishop Sarlat, and, like him, the whole of the Hundred Years War was supported by the king of France. But the owners of the neighboring castle Castelnos stood behind the King of England. Moreover, if the castle of Castelnau was continually attacked by the French, then the British, no one attacked Beynak and did not dare. And in the end, namely in the 1442 year, the lords of Beynack, united with several local barons, managed to drive the British out of Casteln. That is, in their centuries-old discord they seemed to have won ... 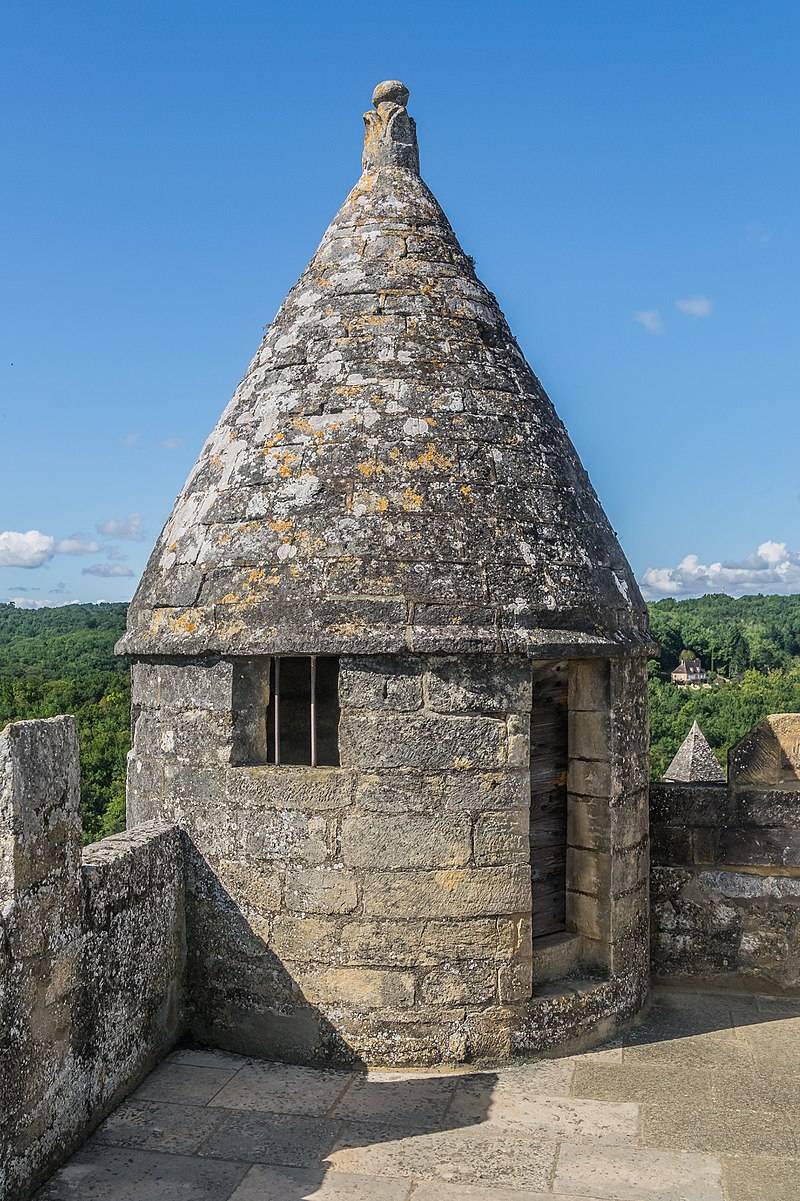 One of these towers on the corner of the dungeon. It had to be cold to hang around them on duty in the winter and gawk around, if the enemies from Castelnau were going to the castle, or the damned British, led by the Black Prince himself. Only wine, probably, saved themselves ...

And then the “War of Faith” series began, when Protestants slaughtered Catholics, and Protestant Catholics, and the de Beynakov family participated in it. Participated, but ... it all ended in the fact that in 1753, there was no male heir to the gens, and all their possessions in 1761 passed to the Beaumont family when Marie-Claude de Beynac was married to the marquis Christophe de Beaumont. So, after eight centuries, the Beynakov family disappeared, leaving behind only an impressive castle. Well, the Bomonov family, in turn, left it at the end of the 19th century. However, there was a distant descendant in the family, the Marquis de Beaumont, who again settled in the family nest, engaged in its reconstruction, but ... went bankrupt without calculating his strength. Such a lock was very difficult for individuals to maintain, so in 1944, it was assigned to monuments stories, and the state became involved in servicing the castle. And then in 1962, the castle was bought from the state by a private individual, Lucien Grosso, although the status of the historical monument behind it was preserved. The castle was brought to them in exemplary form, and tourists are allowed to visit it. 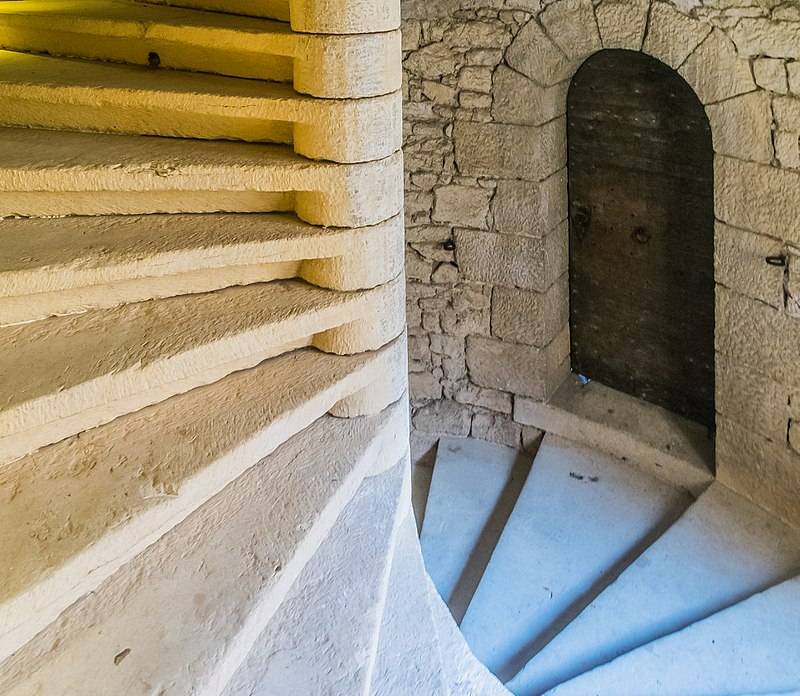 Spiral staircase inside a round tower. 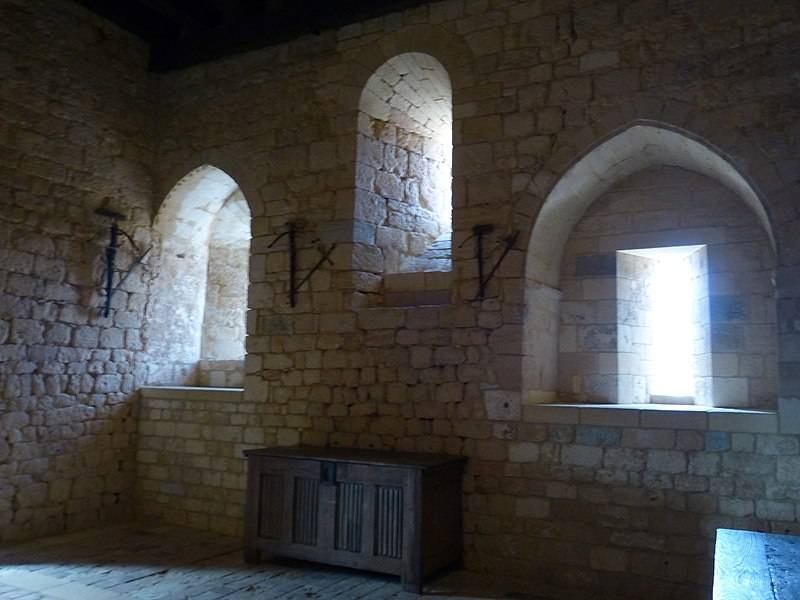 And this is how the donjon looked from the inside.

At this castle you can (and should!) Explore the medieval defensive architecture. Already the sheer cliffs on which it was built were reliable protection. Well, where the entrance to the castle was, double crenellated walls, double moats were erected, one of which was deepened by a natural ravine, and two watchtowers. 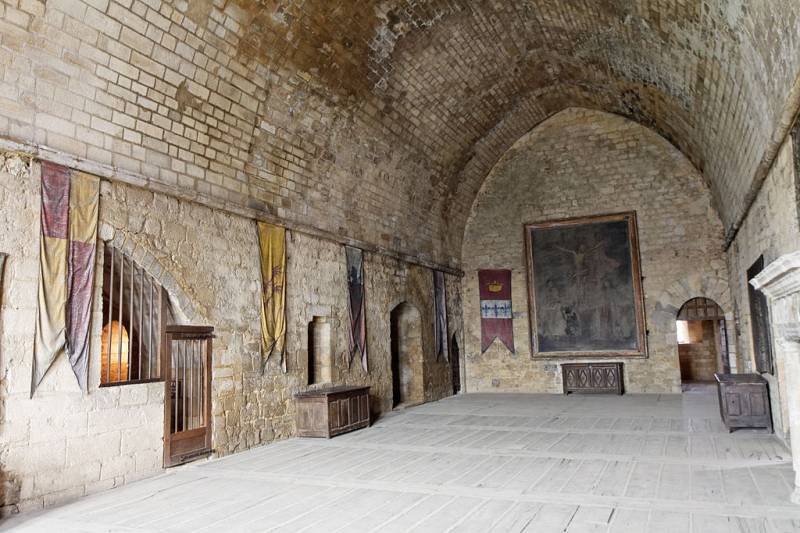 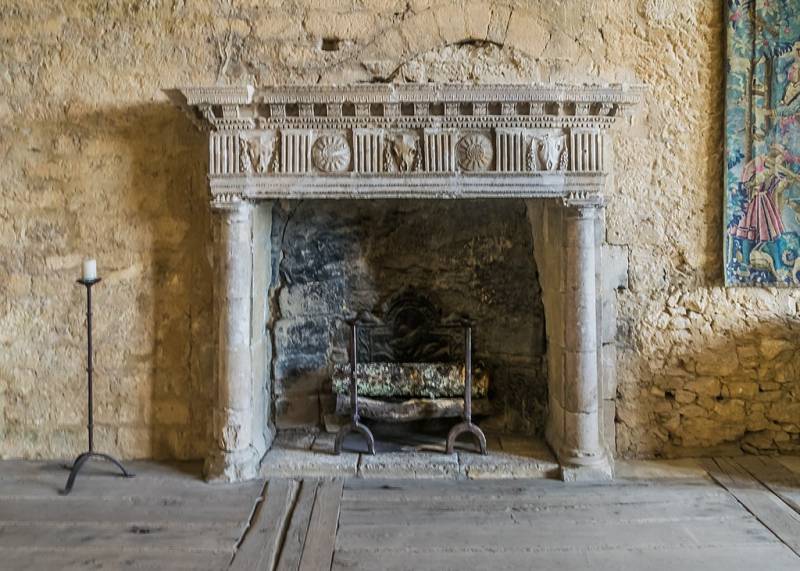 And this is a fireplace in this room for some reason decorated with bas-relief images of bull skulls. Well, a very ... inspiring example of art. Could it not be possible to make something more fun?

The oldest part of the castle was a massive square-shaped building in the Romanesque style, within the walls of which loopholes were made, and watchtowers with narrow spiral staircases inside were attached to the walls. 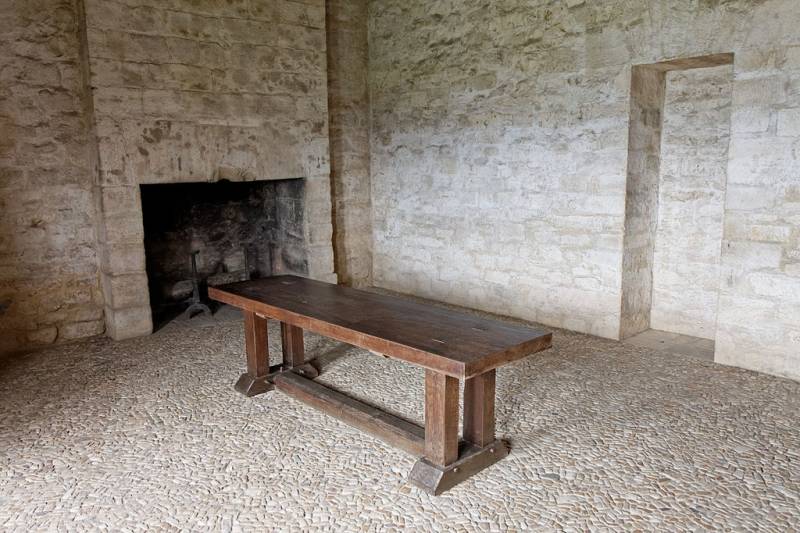 There are a lot of fireplaces in the castle. Probably, they burned a whole forest. But the furniture is clearly poor. 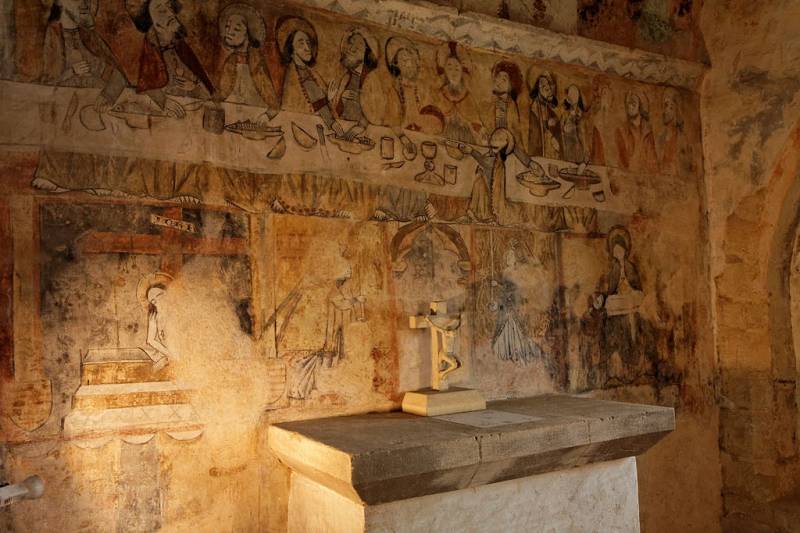 But on the wall of the chapel shows the "Last Supper". Of course, this is not Leonardo da Vinci, but ... a very curious example of medieval painting. 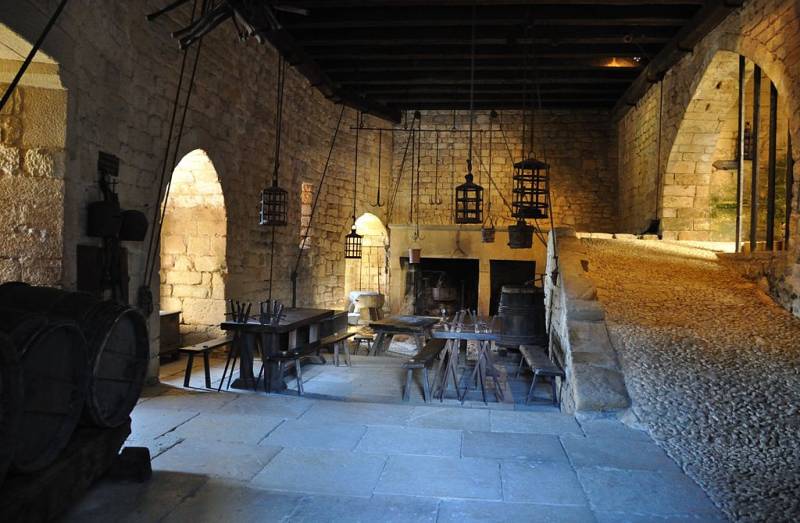 Kitchen. Well, there is only a movie to shoot. Everything is ready! 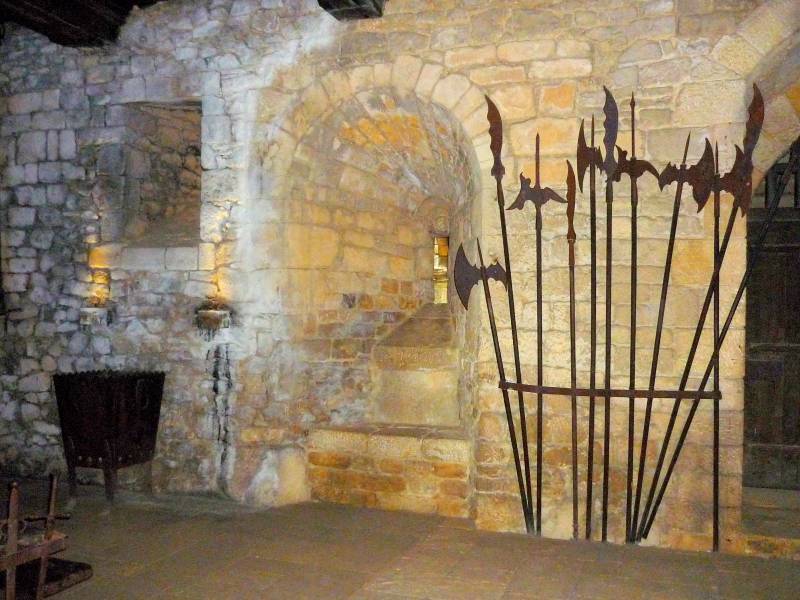 And a whole "heap" of rusty iron on the fan!

A number of buildings of the castle was rebuilt in the XVI and XVII centuries. But many of its buildings have been preserved since the 14th century, and side by side with the more modern ones. In the castle, open to tourists, preserved woodwork and painted ceiling of the XVII century. The main hall of the Renaissance preserved fireplaces and a small hallway with frescoes of the XV century. 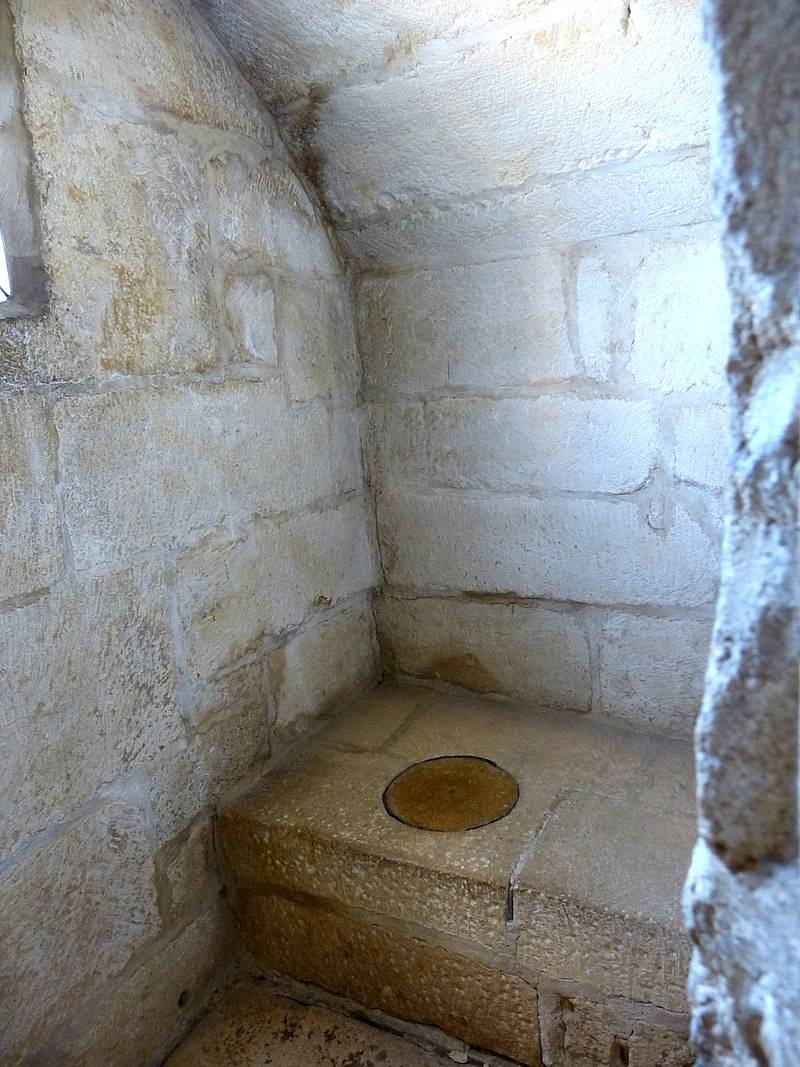 One of the castle toilets. But does not work. 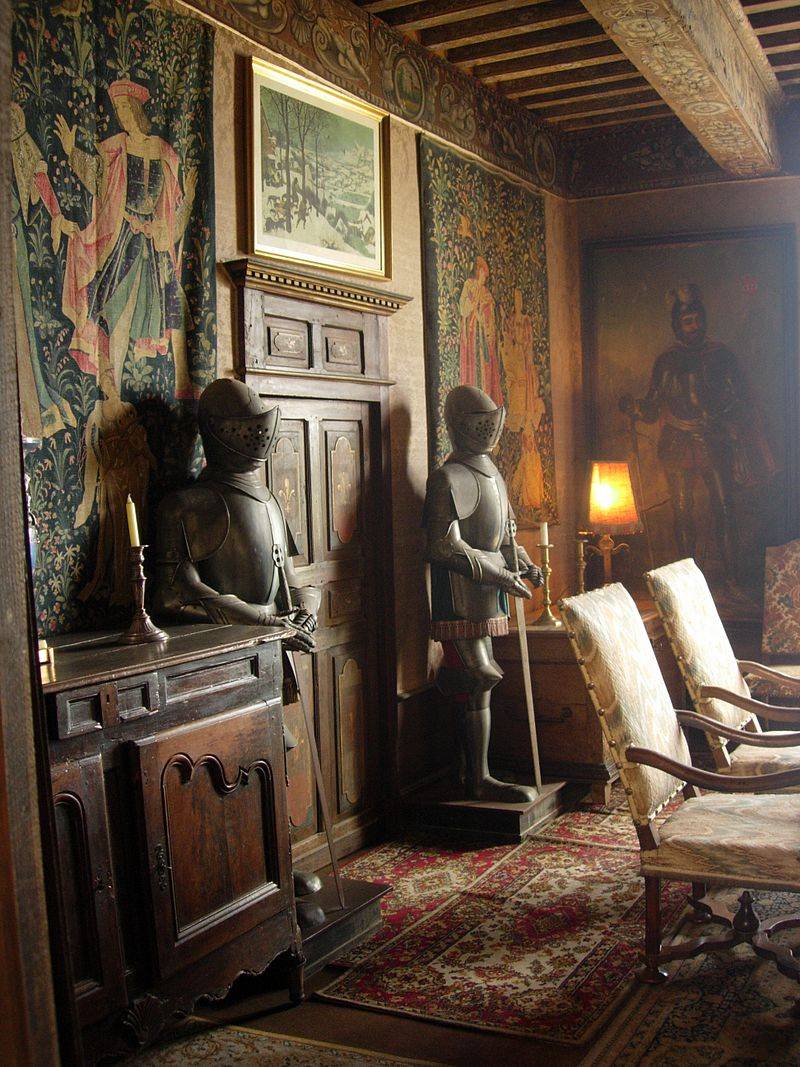 Some chambers of the castle look very impressive, here are just armor obvious remakes. Even from here it can be seen. 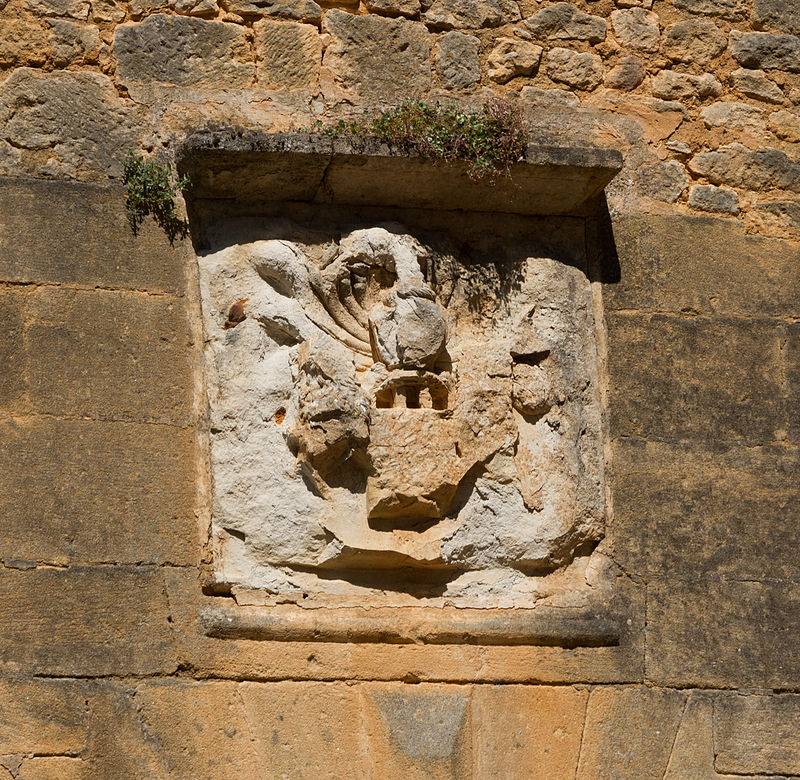 Well, these are traces of revolutionary barbarism. The emblem of the family was broken during the Great French Revolution. 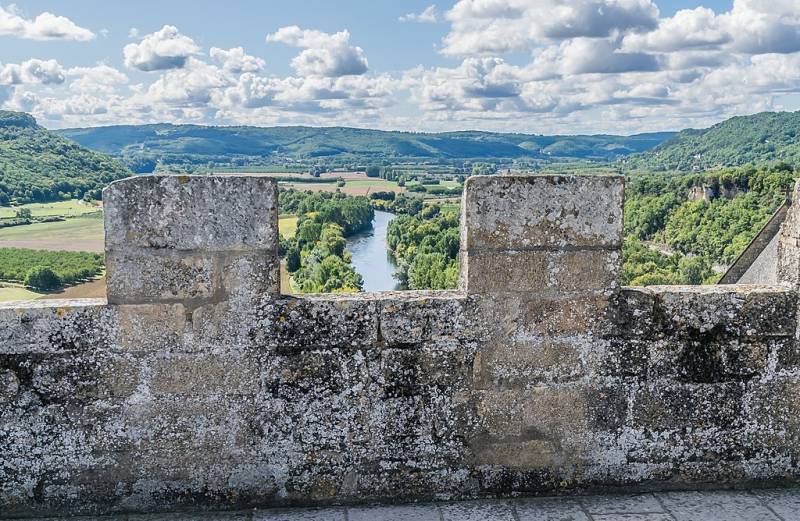 On the walls of different types of teeth. There are such… 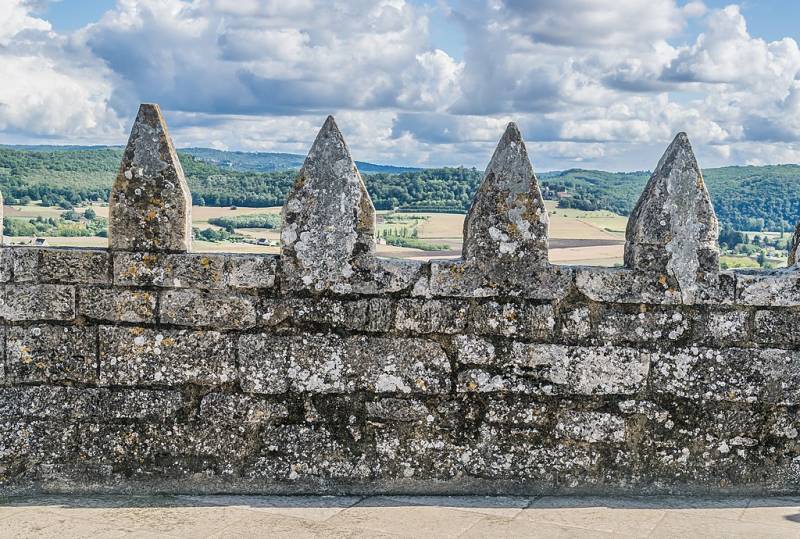 And there are such. Those who like more are the ones who take pictures!

From the height of the towers and walls of the castle on the neighborhood offers a beautiful view. However, it is not so easy to climb to him from the village of Benak-e-Kaznak located at its base. You will have to go all the time uphill and uphill, which is not easy for many to find. 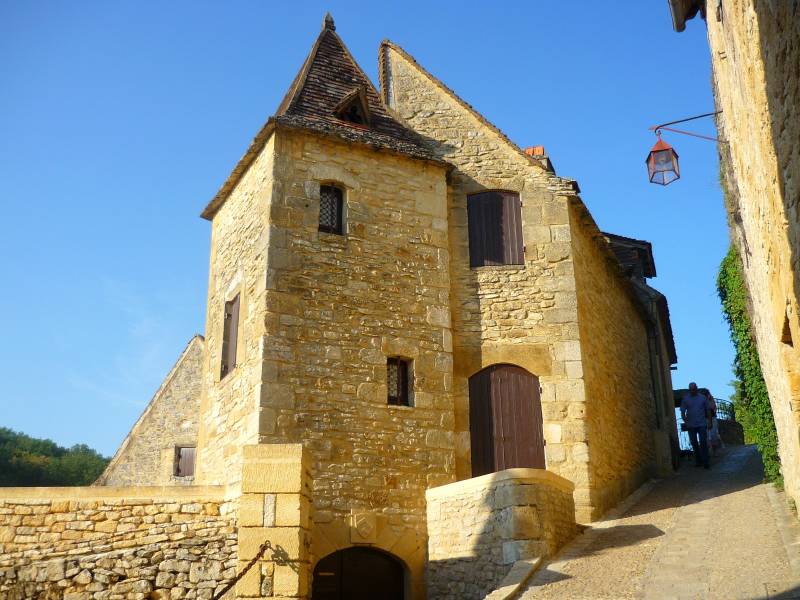 Beynak Castle is also famous for the fact that a lot of movies were filmed in it, including “Aliens” on 1993, “The Three Musketeers” with Bertrand Tavernier in 1994, “The Eternal Love Story” with Andy Tennant in 1998 and Jeanne d'Arc "by Luc Besson on 1999. The village, located at the foot of the castle, also served as a place for the filming of the movie “Chocolate” in 2000 year.

After seeing the castle from the inside, for a fee, you can rent a boat, swim along the Dordogne River and admire it from a distance. 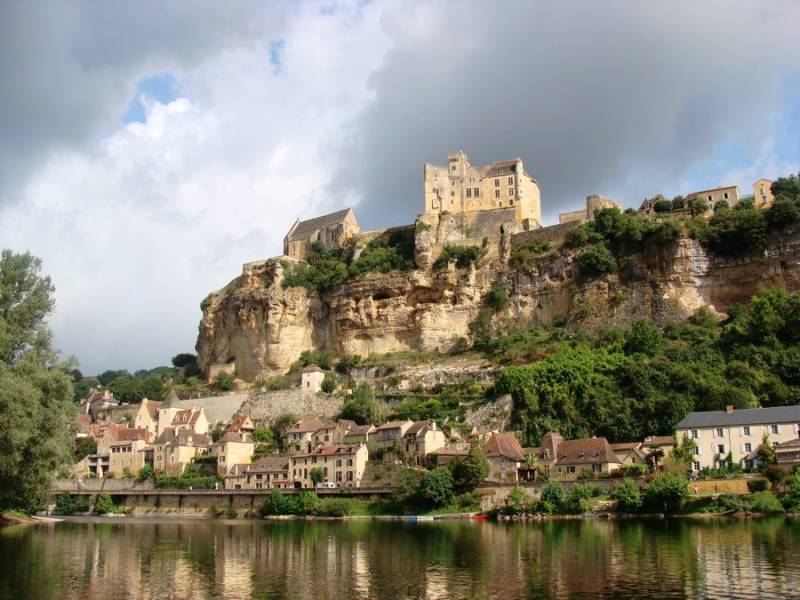 Very beautiful view, is not it?