March 10 2018
28
Perspective models of weapons and equipment must be passed a full test cycle, including inspections in different climatic conditions, before being put into service. The onset of winter makes it possible to carry out tests at low air temperatures on landscapes that have changed accordingly. Not so long ago, the Kalashnikov concern conducted winter tests of a number of new samples. weapons and equipment, including two robotic complexes.


March 6 concern "Kalashnikov" published information about the recent tests of equipment and weapons, the purpose of which was to check the operation of all systems in conditions of low ambient temperatures. The company published a brief description of recent events, and also shared with the public photos and video. The press service of the concern showed exactly what the specialists were doing during the recent tests and what tasks were fulfilled. 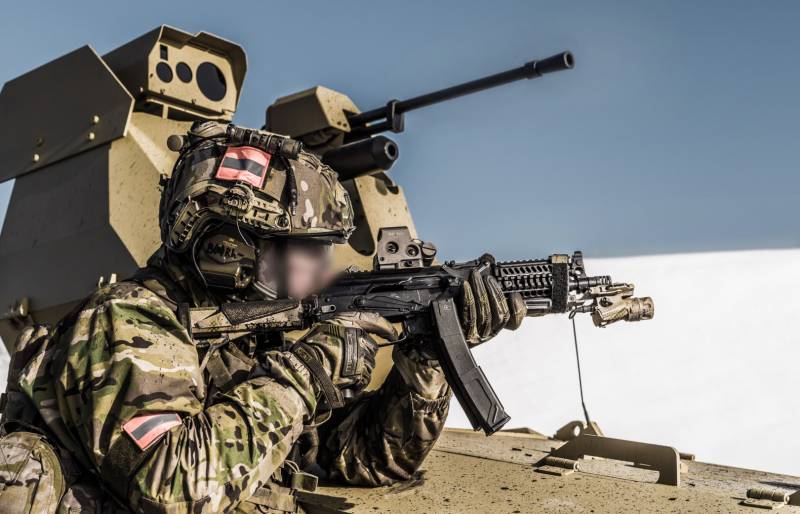 It is reported that the experts of the Kalashnikov concern at one of the testing grounds near Moscow conducted a test of a whole set of various products intended for the army and security forces. A new multi-layered set of military clothing from the 99 Group, various samples of equipment for the fighters, remotely controlled portable platform PPDU, buggy "Tourist", promising motorcycles, etc. came to the test. A special place in the test program was occupied by the combat automated systems "Companion" and "Nakhlebnik".

A short video with selected test moments was attached to a short description of recent events. For obvious reasons, it was mounted in a clip-advertising style, but in this form is of great interest. Viewers were shown how robotic systems can move through the snow and work in low temperatures. Also demonstrated the interaction of automated systems with people in the framework of solving a common combat mission. Of particular interest are footage of the use of weapons of robots. Performing an assault built with a conditional enemy, one of these machines used jet weapons, after which the other system used a machine gun. 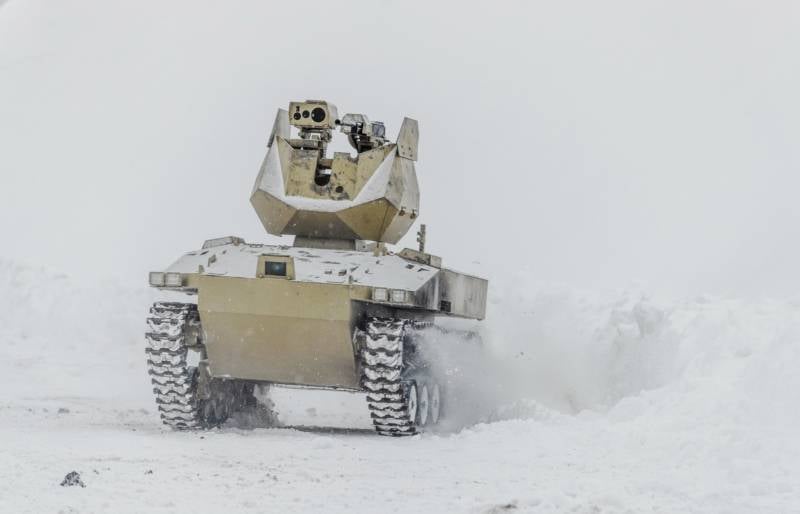 "Companion" at the site

Among all the novelties of recent years, recently tested in winter conditions, so-called combat automated systems "Companion" and "parasite". These products are not fully novelties, since they were presented for a long time. At the same time, they still attract attention, and their development cannot but interest the military or the interested public.

The project of the Combat Automated System (BAS) “Companion” was developed several years ago, and the first demonstration of the finished sample of this type was held as part of the military-technical forum “Army-2016”. The project provides for the creation of a medium-sized self-propelled tracked platform suitable for mounting various types of weapons or special equipment. The development of the project was carried out by Kalashnikov concern specialists in accordance with the task of the Ministry of Defense.

The basis of the “Companion” system is a multi-purpose tracked chassis. This car, equipped with light armor, is equipped with an internal combustion engine and a mechanical transmission. A tracked undercarriage was used with five small-diameter support rollers on each side. The rollers have an independent torsion bar suspension; some of them also use additional shock absorbers. 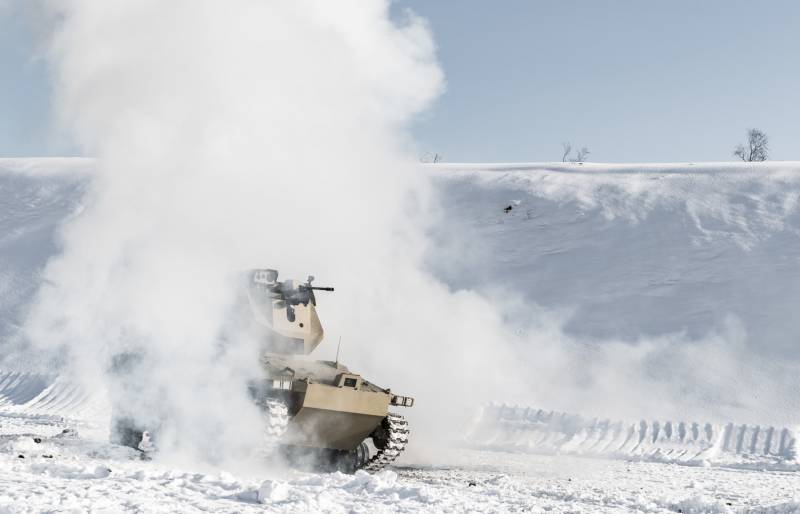 On the case of the Companion there were initially several large covers to accommodate the means of observation in the form of video cameras. In the latest versions of the project, which was built on the recently shown prototype, large armor parts were replaced by units of reduced dimensions. In this case, obviously, the characteristics of the surveillance systems are not reduced. The signal from the video camera is transmitted by radio to the operator’s console. Commands for the power plant and transmission, as well as for the target equipment, are sent back through the two-way channel.

On the roof of the body of the armored vehicle there is a seat for the installation of a particular equipment. First of all, the "Companion" BAS is considered as a carrier of light infantry weapons, suitable for defeating manpower, unarmored vehicles and unprotected buildings. In this regard, starting with his “premiere”, the complex was constantly demonstrated with various combat modules. The last tests, during which the “Companion” interacted with the infantry, were no exception.

This time the combat automated system received a turret with a rented placement of small arms. An interesting feature of the new module was the use of an additional shield. A complex-shaped armor shield is installed in front of the main body of the module, designed for the installation of optical-electronic equipment, providing protection against attacks from the front hemisphere and from the side. The machine gun and the block of optics, in turn, are located above the upper edge of the front sheet. 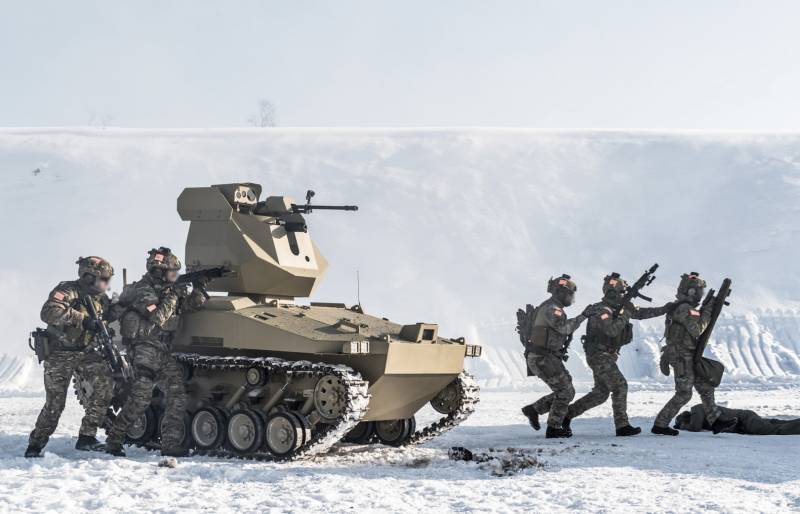 Robot and humans working together

On the left, on the combat module, which passed the winter tests, is a protected unit with optoelectronic equipment. Several lenses on its front wall indicate that the operator has a video camera, a thermal imager and a laser rangefinder, which interact with the fire control system.

To pass the recent tests, the Companion UAS received a set of barreled weapons, allowing to solve various combat missions. On the combat module mounted machine gun PKTM rifle caliber. In the center of the product was an automatic grenade launcher AG-17A. With the help of such weapons, the system is able to fight against different goals that do not have powerful protection.

The product "Companion", depending on the configuration, can have a combat weight of up to 7 tons. The existing power plant allows you to reach speeds up to 40 km / h on the highway. The range of the machine is limited to 10 km. At the same time, the area in which the complex operates should not interfere with the transmission of radio signals to the operator’s console and to BAS. 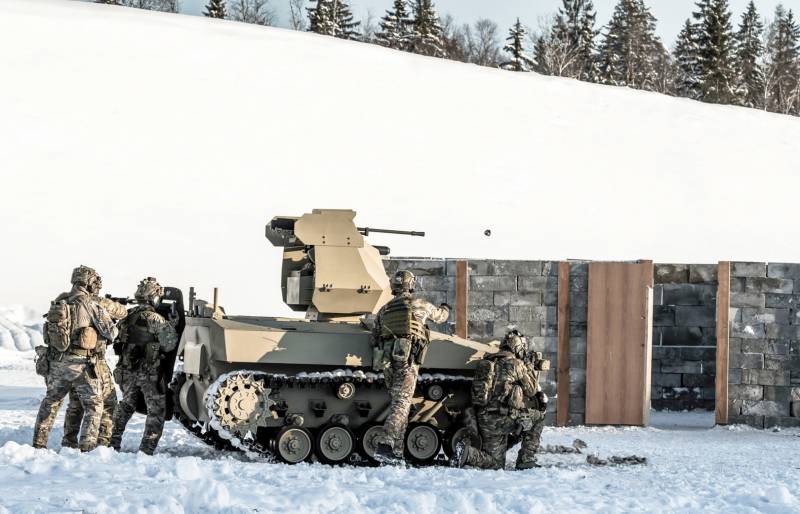 Solving certain tasks, the Sotovnik robotic complex can work independently or together with people. Thus, during the recent winter tests, an automated system supported the assault on the building. She covered the fighters with her armored corps, and also used standard weapons. Thus, it can perform the functions of a scout, striking machine, or a means of tracking and supporting infantry.

Robotic complex "parasite" is a different version of the automated combat system that can solve various problems in different conditions. The main difference of such a machine from the "Companion" are reduced dimensions and weight. Due to this, the new complex can be used as a supplement to a larger machine. Combined use of two BAS with differing characteristics can provide certain advantages.

The project "Nakhlebbnik" started a few years ago, and not so long ago gave real results. In February last year, the Kalashnikov Concern for the first time showed a prototype of such equipment for the next exhibition from the Ministry of Defense. The prototype was demonstrated along with the combat module carrying a multi-barreled machine gun. Subsequently, the project was finalized, and now experienced automated systems may carry other weapons. 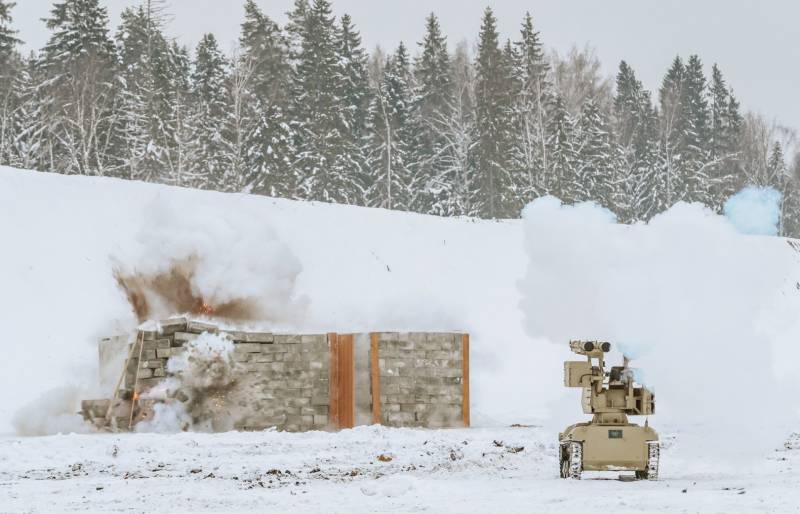 In May last year, the leadership of the Kalashnikov concern clarified the goals and objectives of the Nakhlebnik project. It turned out that this project was developed as an experiment and was intended for testing various technical solutions. The main goal of the work was to study the new layout options for compact equipment with the most dense placement of aggregates. The experiment ended in success and allowed to collect the necessary data. At the time of the appearance of the new information, as it was stated, the developments on “Freeloader” have already found application in the following projects.

The basis of the BAS "Nakhlebbnik", as in the case of the "Companion", is a multi-purpose tracked platform with its own power plant, chassis and corresponding control systems. Also, the two projects are similar to the use of a reservation that protects the car from the fragments and bullets of small arms. The control is carried out with the help of the operator panel with the transmission of the video signal and commands via a two-way protected radio channel.

A smaller tracked platform is equipped with an internal combustion engine of reduced power, and also differs from the “Companion” in its undercarriage design. This time on each side of the hull there are only four track rollers. Suspension - independent, based on balancers and springs. In the undercarriage there are front-wheel guiding wheels, unified with road wheels, and stern driving wheels. 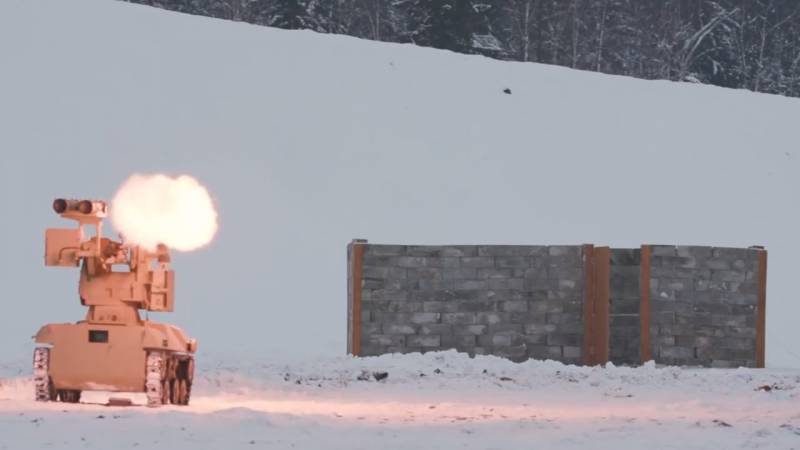 Initially, the system "Nakhlebbnik" was demonstrated with a remotely controlled combat module, equipped with a four-barreled machine gun GSHG-7,62. Such a module had a body of a characteristic multi-faceted form with a large recess for mounting the rocking machine gun mounts. On the left side of the case was a block of opto-electronic equipment, on the right - a box for cartridge tapes. During recent tests, the complex had a modified configuration. At the top of the combat module, a pair of pillars were installed, on each of which two rocket-propelled grenades were fixed. For all its simplicity, such a re-equipment of the module in the most noticeable way increased its firepower.

The potential of BAS "Nakhlebbnik" with a combined machine gun and grenade armament was clearly demonstrated in the video. The robot went to the firing line and fired a grenade at a stone building. The grenade pierced a hole in the wall, after which it exploded. Part of the wall turned into wreckage, and a cloud of smoke, dust, snow and steam rose above the “battlefield”.

Unlike the larger “Companion”, the relatively compact “Freeloader”, as it follows from the published materials, only worked on the landfill independently. The teamwork of the combat automated system and people was not worked out. However, from some moments of the video, it follows that the ground-based equipment worked with the use of aerial reconnaissance data obtained using unmanned aerial vehicles.

The combat automated systems “Companion” and “Nakhlebnik”, developed by the Kalashnikov Concern, were presented to the general public in 2016 and 2017. Over the past time, they managed to get enough fame, as well as go through refinement and noticeably change. In parallel with the improvement of projects conducted various tests. According to the latest data, not so long ago, the next inspection of equipment passed, during which it showed itself on a snowy terrain at low temperatures. 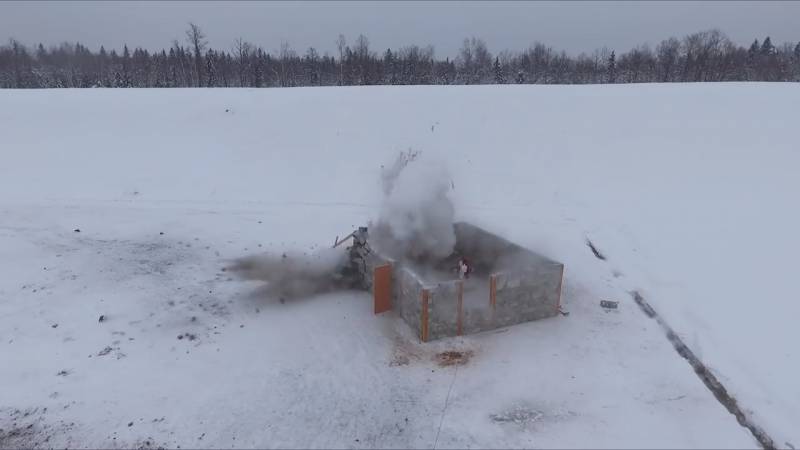 The result of shooting - the wall is destroyed

Work on new models of technology continues, and perhaps in the future, combat automated systems will reach adoption for service and operation in the military. It is curious that the developer company plans to create other samples of combat robotic systems. Last spring, it was announced that on the basis of the existing developments, a UAS project with a mass of about 20 tons was being created. The current successes of such a project of particular interest have not yet been announced. Perhaps the first information about its actual results will appear in the very near future. It cannot be ruled out that at the future Army-2018 forum the first demonstration of a new type of experimental car will take place.

Remotely controlled combat vehicles with one or another weapon or equipment are not just a current trend in the field of military equipment. Such systems have a number of characteristic advantages and are of great interest to the armed forces. To date, the Russian defense industry has created a number of samples of this kind, and the development process continues. In the foreseeable future, at least some of the combat automated systems will have to enter into service with the army. Perhaps among them will be "Companion" and "Nakhlebnik", not so long ago, passed the tests in the conditions of the Moscow region winter.