Another ultra-secure BMP in Syria

March 7 2018
14
In the Eastern Guta, the so-called Serkhzashchischennaya BMP-1 was noticed in the Syrian army, reports Rossiyskaya Gazeta. 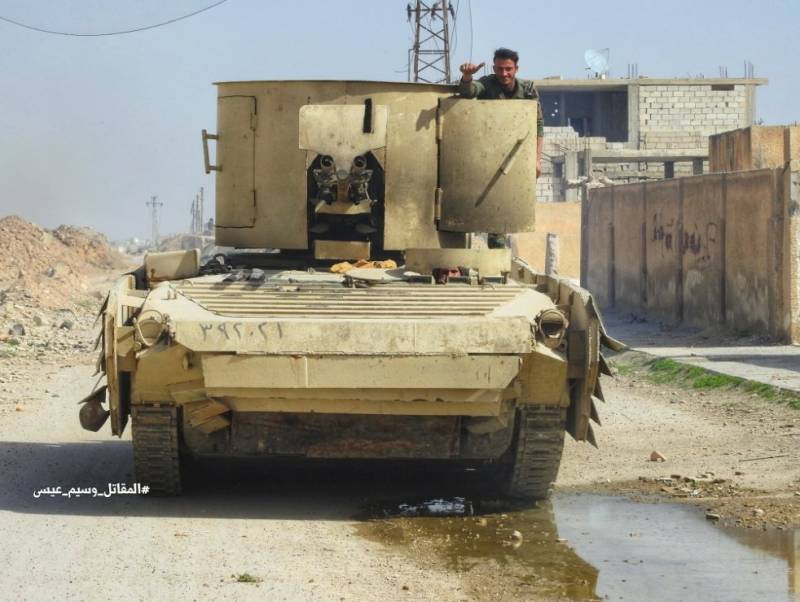 This armored vehicle is in service with the elite 105 brigade of the Republican Guard.

“Judging from the photograph, during the modernization, two major shortcomings of the BMP-1 were eliminated - weak security and insufficient firepower. The first problem has already been solved traditionally for the military equipment of this compound - by installing corner protection. The armored plates were welded at a certain angle in such a way as to create a multi-layer shielding effect, ”the author writes.

He recalls that at the beginning the Syrians tested this armor on tanks T-72M1: "combat use has shown that the" corners "significantly reduce the effectiveness of not only rocket-propelled grenades, but also ATGMs." A case was noted when "seventy-two" without damage suffered a hit from a Metis ATGM missile.

The BMP-1 and Shilka self-propelled self-propelled guns, which are used in ATS as fire support vehicles, were next in line to install such protection.

In addition, the machine depicted in the photo “instead of a single tower with an 73-mm smoothbore 2А28“ Thunder ”gun received an armored circular rotation box with a twin-speed 23-ZN-23 gun,” is noted in the publication.

According to military experts, the presented modernization is the best of those that were carried out by Syrian craftsmen. It is possible that it will become a truly mass.