March 8 2018
33
The preliminary results of the elections to the Italian Parliament struck both Italy and the entire European Union. So-called populists got the majority of votes, and with them Euro skeptics who oppose migration policies. Traditional parties were defeated. Other European analysts are already talking about the victory in Italy ... Putin. Of course: where without Putin! 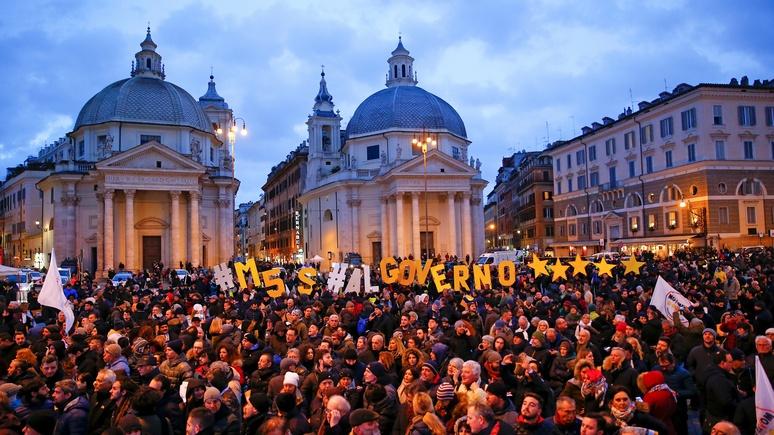 Counting ninety-nine percent of the vote showed that the Five-Star Movement won the election in Italy. This party in the EU is considered populist, and led by Mr. Grillo, a former comedian. And this movement won - with a large margin in the number of votes: more than 32% of voters voted for the party. A comedian can celebrate a resounding success. Actually, he does.

“Democratic Party” is in second place: about 19% of votes. For her, this is more than a modest result.

Other relatively honorable places were divided by the center-right parties in Italy.

"League" took the third place: more than 17 percent of the vote. Recall that this party has long and firmly protested against the current migration policy of the European Union.

The nationalists of the "Brothers of Italy" got four-odd percent of the vote.

Stephanie Kirchgaessner, Roman correspondent «The Guardian», spoke about the victory of the "two populist parties" in the following words: these parties won "sensational victories in the national elections in Italy." The journalist immediately asked an important question: would Putin benefit from the "pro-Kremlin sentiments of the Italian populist parties"?

The two “populist parties” that won the elections have “close ideological ties with the Kremlin and can translate Italy’s foreign policy into a course advantageous to Russian President Vladimir Putin,” the journalist says.

Both the Five Stars Movement and the League, formerly known as the League of the North, had previously raised questions of withdrawing from NATO, the termination of sanctions against Russia (which only hurt the Italian economy) and even "supported the Russian campaign in Syria"!

Moreover, Matteo Salvini from the League made several trips to Moscow, including a trip that took place a few weeks before the 2016 constitutional referendum of the year. “No” at the referendum then marked a major defeat for the then Prime Minister Matteo Renzi, head of the Democratic Party and associate of the former American President Barack Obama.

In 2014, Salvini refuted reports that he received "cash from the Kremlin" according to a scenario that was once run around by "his ideological partner" - Marine Le Pen in France.

“I was in Moscow, but I did not ask for money, but I was there because we have a political vision of Europe, different from today’s, and one that Brussels doesn’t share,” Salvini explained to reporters.

The founder of M5S (“Five Stars”), Beppe Grillo, became famous for the fact that his party “has changed its position” in recent years, the correspondent continues, not without irony.

In 2016, one of the foreign policy experts from this party spoke at the congress of the Putin party "United Russia". In his speech, he not only called for the termination of EU sanctions against Russia, but also said that the crisis in Ukraine was the result of EU and US intervention in Russia’s affairs.

According to expert opinion, which is given later in the article, the growing influence of M5S and the League does not necessarily mean a change in relations between Italy and Russia. Yet, from now on, much more may be required for negotiations: for example, NATO will have to base its decisions on “certain grounds”, perhaps a clear “resistance to new sanctions” or the extension of “previous sanctions”. Professor Raffaele Marchetti from Rome recalled that last year he had seen politicians from only two parties in the Russian Embassy: M5S and the League.

The failure of the “traditional” politicians in Italy, we add, was the reason for leaving Matteo Renzi to retire to the party. At least, there are such messages in the Italian press. The politician intends to resign from the post of general secretary of the "Democratic Party", reports TASS with reference to ANSA.

The reason for the proposed decision was the party failure in the parliamentary elections: the previously popular “Democratic Party” did not overcome the 20% level.

It's funny, but this politician said earlier that he would not resign even if the party failed. Apparently, the outcome of the election greatly upset him. About half of the ministers of the outgoing government turned out to be outside the parliament today. In addition, Mr. Renzi, who led the party in 2014 a year and then took the post of prime minister, is accused of splitting the center left: they say it was his work that became the actual cause of such a split.

It is difficult to say whether Renzi will soon resign, but the party chair beneath him is clearly staggering.

It is ridiculous to think, we note that the Italians in the elections did not cast votes for their parties, but for some interests of Putin. Despite the harm from sanctions mentioned in Italy, Italians care little about any success or failure of the Kremlin. A coincidence can be seen only in the fact that present-day Italy has paid closer attention to a number of values, which have recently been much spoken of in Moscow. This is national sovereignty and an objection to the all-powerful “hegemon” (USA), as well as an objection to sanctions, from which real losses are felt in Italy. Migration is a separate issue for both Italy and the European Union. Italian journalists and losers in political choices can regard him as “Putin’s” interest, but this does not make populist parties “pro-Kremlin”.

The accusations and worries of opponents of the populist parties and of Brussels are built on the fact that the election winners, who in the future will create a coalition, seem to have one common feature: these forces are in positions of Euroskepticism.

And this mood, perhaps, one way or another, can be used by Moscow. But not at all for the collapse of the EU and NATO, as the omnipresent conspiracy therapists and supporters of the “Putin’s cunning plan” write about. And to ease the sanctions. The Russian economy is now far from in the best shape, and the weakening of the sanction strangulation would give it an impetus to development. Of course, the revival of trade with Russia would be useful for the growth of Italy's GDP.

It is still difficult to say which agreement will be reached by the election winners in Italy. But another thing is clear: the picture of such electoral achievements is typical in Europe not for Italy alone. Earlier, Euroskeptics of Hungary and Austria, as well as in Poland, showed impressive results. Quite good results were also demonstrated by the so-called ultranationalists of the Netherlands, Germany and France.

This kind of achievement was shocked over and over again by Brussels, which extremely negatively reacts to the strengthening of not only “populist” and “pro-Kremlin”, but also openly anti-immigrant moods. The latter concerns the entire European Union. As a result, Brussels is beginning to suspect that some kind of cardinal reforms are needed in the former united Europe, otherwise the union will break from the inside.

While Brussels pulls, "populists" win elections and offer their solutions.

Observed and commented on Oleg Chuvakin
- especially for topwar.ru
Ctrl Enter
Noticed oshЫbku Highlight text and press. Ctrl + Enter
We are
Situational analysis of the death of the MH17 flight (Malaysian Boeing 777), made on the basis of engineering analysis from 15.08.2014Bashar al-Assad: In Syria, not the “revolution” that the enemies are talking about, but the revolution of the army and the people against terrorists
Military Reviewin Yandex News
Military Reviewin Google News
33 comments
Information
Dear reader, to leave comments on the publication, you must sign in.