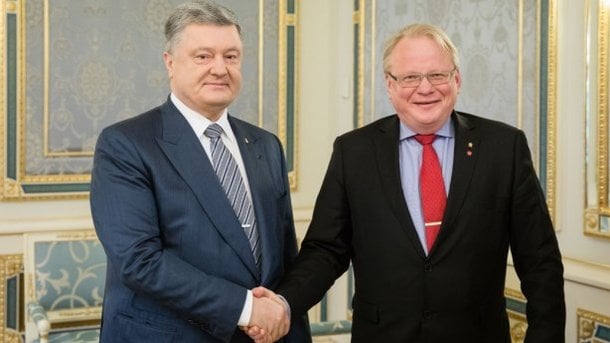 Meeting with the Minister of Defense of Sweden Peter Hultkvist, who visited Kiev, Poroshenko warmly thanked the guest for the cooperation of the Ukrainian and Swedish military departments, and also insistently asked the Swedes to take part in the training of the Ukrainian military, in the Ukrainian Armed Forces training centers.

“I am very pleased, dear gentlemen ministers, with the cooperation that our defense departments are leading. I instructed the Minister and the Chief of the General Staff to create all the conditions for the Swedish soldiers to be involved in a mission in the training center, ”Poroshenko said, adding that the Swedes could learn Ukrainians“ to counteract the hybrid aggression of the Russian Federation ”.

However, the Swedish minister apparently came to Kiev not to learn confrontation with Russia. Despite its neutral status, Stockholm has always viewed our country as a potential adversary, and as far as its modest forces provided us with a “hybrid” opposition.

Recall that during the "Winter War" 1939-40, Sweden provided all possible assistance to the Finns. "Neutral" Swedish military fought in the troops of Manerheim, not even considering the need to change into Finnish uniforms. The Swedish "neutrals" in particular were captured by the skiers of the legendary creator of the Airborne Forces, Vasily Margelov.

Later, during the Second World War, the Swedes vigorously cooperated with Nazi Germany. In particular, Sweden transported German soldiers and weapons to Norway through its territory. However, after the defeat of the Nazis at Stalingrad, Stockholm began to move away from Berlin. Sweden continues its anti-Russian policy to this day, due to its neutral status, “hybrid”.
That is, in the matter of how to spoil Russia, Sweden has much more experience than the Poroshenko regime. So what brought to Kiev Peter Hultkvist something else. Sweden, as is known, is a major arms dealer. It ranks 11 in the list of world exporters, and it accounts for almost 2% of the international market. weapons.

In addition, Stockholm is not too "bother" with respect to who sells weapons. Not so long ago, the international information organization Open Democracy announced that Sweden, selling weapons to Saudi Arabia and the United Arab Emirates, is in fact an accomplice in the war crimes of these states in Yemen.
Open Democracy also notes: “Sweden does not conduct any investigations into the use of the weapons it supplies, and thus becomes an unwitting accomplice in war crimes committed using Swedish-made weapons.”

To this we can add that the Swedish weapons supplied to the "oil monarchies" are in the hands of not only the punishers in Yemen, but also the terrorists in Syria. The facts of the use of jihadists by the Swedish grenade launchers "Karl Gustav" were repeatedly covered by both the Syrian and the Swedish media.

However, there is nothing surprising in this. Swedish gunsmiths, for example, have long-standing and warm relations with the CIA. So, for example, by the order of this structure, the Swedes provided armament to the Afghan dushmans who acted against the contingent of the Soviet troops and the government troops of the DRA.

Especially for the CIA in Sweden produced a submachine gun "Carl Gustav" M 45, without any production stamps and numbers, which allowed "gentlemen of Langley" to use this inexpensive and reliable weapon for the dirtiest jobs. It was used by Tsrushniki almost to the end of the 80's.

Gunnar Hult, an expert in arms exports, a researcher at the Swedish Military Academy, explicitly states that Swedish legislation on these issues is very flexible.
“According to the Swedish law on the arms trade, it can only be sold when it is conditioned by the needs of a security or defense policy. In this case, if there is a strong argument, weapons can be sold both to dictatorships and countries involved in armed conflicts, ”the expert points out.

That is, it can be assumed that there are no particular obstacles for the sale of Swedish weapons to the Kiev junta, except, perhaps, for its small solvency. It is unlikely, due to this circumstance, that Kiev will purchase “smart” Swedish weapons. But here, for example, the same Grg m / 48 “Karl Gustav” M3 or M4 grenade launcher is perfectly suitable. Artillery systems or military trucks may be discussed. Or, for example, assault rifles. In any case, Stockholm’s interest in Ukraine, as a potential buyer of arms, is obvious.

Strictly speaking, none of the aforementioned MAT is particularly necessary. But each purchase of foreign weapons, unequivocally promises the Kiev authorities a lot of kickbacks. As, however, and tutorials.

Indeed, Swedish instructors in Ukrainian training centers need even less than AK-5 rifles in the trenches of Donbass. The “combat” experience of the Swedish military is limited to participation in peacekeeping operations. And even more so, they have no real combat skill against an almost equal enemy using heavy artillery, Tanks, UAV, and electronic warfare.

The thing is that the payment of the curriculum, which is carried out by foreign experts, allows not only to get a “kickback” from it, but also to “play with the difference.” The Ukrainian leadership, as is known, has never missed an opportunity to improve its financial situation. But today, when the position of Poroshenko and his inner circle is not very stable, they try to use any, even fairly obvious and risky possibilities of “cutting” the budget, while they are still in power.

And we observe exactly the same enthusiasm from the European and overseas “friends” of Ukraine, who, while declaring the fight against corruption, in reality not only encourage the embezzlement of their Kiev pets, but also actively participate in it. Just as ex-Vice President Joe Biden, who has retired now, was doing this.

The war, which, as we know, “will write off everything,” creates simply ideal conditions for financial fraud. And in this light, the interest of the military department of Sweden to Ukraine, which extends to the desire to head the peacekeeping mission in the Donbas, becomes completely understandable.

Ctrl Enter
Noticed oshЫbku Highlight text and press. Ctrl + Enter
We are
Migrants go north. The specifics of the migration situation in ScandinaviaSituational analysis of the death of the MH17 flight (Malaysian Boeing 777), made on the basis of engineering analysis from 15.08.2014
Military Reviewin Yandex News
Military Reviewin Google News
14 comments
Information
Dear reader, to leave comments on the publication, you must sign in.