The myth that Russia is part of European civilization 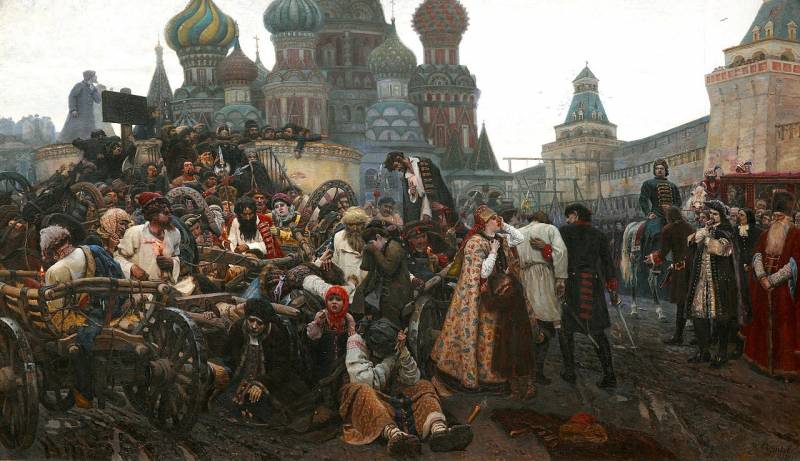 The epoch of Peter I became a turning point, as Russia was first openly tried to recode, turn into Europe. The turn to the West in Russia began under Boris Godunov and the first Romanovs, took shape as a priority project already under Princess Sofia and the government of Prince V. Golitsyn. But it was under Peter that Westernization became irreversible and eventually led to the 1917 civilization catastrophe of the year.

Peter's long trip abroad shaped his turn to the West. In August, 1698, when Pyotr Alekseevich will return to Moscow, a sense of anxiety and fear will engulf everyone, from Shein’s “generalissimo” to ordinary citizens. In the capital, the tsar was not very fond of tribute, which he imposed on the people, for his connection with German settlement. In the crowds of the common people, various rumors wandered: they were caused by dislike for the king and his innovations and were supported by the sovereign’s absence for one and a half years. They said that Tsar Peter Alekseevich was substituted abroad. As a result, the archers rose. Mutiny suppressed. But Peter, frightened, hurried to Moscow to "pull out the seed of Miloslavsky."

In modern Russia, in which in the 1990s they decided to restore the project of the Romanovs - to create a pro-Western Russia, the myth that Peter decided to return Russia to Europe is popular - ostensibly the Mongol-Tatar invasion has torn us off from European civilization and because of this, we are several hundred years behind in development. That is, Russia was originally part of the Western (European) civilization, but because of the yoke of the Golden Horde, it slipped into Eastern despotism, slavery. But the Romanovs began to turn to Europe, and Peter made it irreversible. We went on the "high road of the development of human civilization." Of course, there were mistakes like the horrors of serfdom, but after its abolition and reforms of Alexander II the Liberator, Russia allegedly finally became part of the West, moving towards the victory of democracy and the market. However, the "bloody Bolsheviks" led by Lenin and Stalin allegedly "killed the prosperous Russia of the Romanovs" and brought the country into a "communist dead end."

This is a myth for fooling the Russian people. Russia was originally a separate, self-sufficient civilization, with its code-matrix of development. The basis of the Russian matrix is ​​social justice, such concepts as conscience, truth and love. This is its fundamental difference from the Western project, which is based on social injustice, the desire of a small group of "elect" to enslave all of humanity.

In an ideal Russian project, the people and the authorities (the state) are one. Sobornost, fraternity and cooperation in solving national problems. The royal (princely) power is sacred, since they will solve national problems, uniting Heaven (Kingdom of Heaven) and the people in the work of building the Kingdom of God on earth (city of Kitezh). As soon as the elite of Russia-Russia refuses these ideals, begins to solve personal, narrow-group tasks, wait for the Troubles, as the answer of the Russian civilization and the Russian superethnos to injustice and managerial mistakes of the management layer.

In the western project of the Romanovs, catholicity was replaced by domination, cooperation by suppression, fraternity by hierarchy. The authorities declared themselves to be of the highest value and suppressed the people, turning them into a “population”. The people kept themselves, but the connection with the authorities was largely broken. Orthodoxy lost its essence due to the reform of Nikon, and under Peter, it finally became part of the state apparatus, one of the contours of government and control over the people. Faith has lost its essence, becoming a formality. The connection with heaven (kingdom of heaven) was destroyed.

The state and its owners - the Romanovs and their entourage - placed themselves above the people and the entire Russian civilization. The state now tried to change Russia, “civilize” it, make it part of the West. The Romanovs tried to replace the "Russian matrix", the basis of the foundations of the Russian people and civilization. Thus, Peter Alekseevich decided not only to modernize the state, the armed forces, the economy, science and education with the help of Western methods and technologies. He purposefully invaded the root of our civilization - its matrix-code, core, culture based on the Russian faith.

Therefore, the cultural revolution and became the basis of Peter's transformations. Shaving beards, European fashion, assembly meetings, tobacco - all these are only bright individual details. The king literally punched and iron planted Western culture, European "civilization" in Russia. For this, self-government and patriarchy were destroyed. For this, thousands of people died during the construction of the European capital of the “new Russia” - St. Petersburg. Peter tried his best to lead Russia to the "right way". He was not sorry for others. The deep meaning of this policy was well expressed by one of Tsar's close associates, Peter Saltykov: “The Russians are in every way similar to the Western nations, but they are behind them. Now we need to put them on the right path. "

Peter considered his country "backward." This view of the Fatherland was formed by Peter under the influence of foreigners, who “treated” him appropriately from childhood. It was they who gave Peter the image of a “developed European power” and predetermined his understanding of Russia as a “backward country”, which must be “corrected” by the most cruel and bloody methods. Western Europe made a huge impression on him. Strong regular armies and fleets, turbulent trade, large enterprises-manufactories, achievements of science and technology, educated people, etc. Against the background of an enterprising Europe, booming and striving to subdue the whole world, Russia seemed to Peter to be a miserable and deaf province.

Inspired by Europe, Pyotr Alekseevich experienced a double feeling for the Motherland: he loved and hated her. He loved, as N. Ya. Danilevsky noted, in Russia “its strength and power, which not only had a premonition, but had already created,” loved in it the instrument of his will and his plans, he loved the material for the building, which he intended to build on the model and the similarity of the idea originated in it, influenced by the European model; I hated the very beginnings of Russian life ... ”.

At the same time, we will be fair - the objective foundations of a fundamental reorganization of Russia took shape even before Peter. Under Godunov and the first Romanovs, Russian people were sent abroad to study, there was a desire for foreign languages, fashion, culture, trade with neighbors, and foreign military experts were invited to modernize the army. Russia during this period was subjected to strong external pressure from the East - a powerful Turkish empire with a vassal Crimean Khanate and the West. It was necessary to modernize the armed forces, develop trade, raise industry. It was necessary to develop science, technology and education. Without solving these tasks, Russia could once again plunge into the Troubles, degrade to become the prey of more powerful, military and technologically developed neighbors. To become a colony of the advanced Western powers, as will become not only the cultures and nationalities of America and Africa, but the developed ancient civilizations of India, Indochina and China. Russia could again disintegrate, as before, with the release of Novgorod, the western regions, etc.

Russia after the Troubles did not calm down, no wonder the XVII century was included in history as "rebellious age". The country was shaken by the powerful urban uprisings, Stepan Razin’s bloody war. Then more than once the riots were raised by riflemen. Since 1649, there has been a total enslavement of the peasants, which they did not like at all. In Little Russia (Ukraine) there was a civil war - the period of the Ruins. Nikon and Romanovs split the church and the people. A whole separate Russian world appeared - the Old Believer. At the same time, the Romanovs for a long time tried to suppress it with fire and sword. So, in 1666 - 1674. Tsarist troops stormed the stronghold of the Russian faith - the Solovki monastery. And taking it, the royal troops tortured and killed the monks who heroically fought for their abode. The Romanovs tortured and burned the spiritual leader of the adherents of the Russian faith, the archpriest Avvakum. However, despite the most severe repressions, supporters of the old faith stood and began to build their Russia. In 1708, the uprising of K. Bulavin began, which almost led to a new large-scale peasant war.

Thus, it was obvious that the country needed urgent changes. A systemic crisis could be the beginning of a new Troubles and the end of Russian civilization. As we see from history, modernization could be carried out without a total breakdown of the national culture, the matrix. For example, they were able to do it in Japan - the Meiji revolution. When the Japanese perfectly combined the regular army, armored fleet and railways with the preservation of Shinto and Buddhism (the basis of Japanese civilization), the emperor's sacred power and the samurai spirit in the new armed forces. Another successful example is China. In the Celestial Empire, the Communist Party was able to pull the country out of the terrible distemper, the collapse of the country and the semi-colonial regime, which poisoned millions of Chinese with opium. At the same time, the Chinese Communists retained the Chinese civilization code.

The problem of Peter was that the church schism had already happened before him. The project “hail of Kitezh” was destroyed before Peter, he did not know about it. He was left with a choice of two evils: 1) the degradation of the Romanov kingdom, which destroyed the Russian faith and enslaved the peasants, the periphery of the West and the death, perhaps very long; 2) an attempt to fundamentally modernize in a Western way, total Westernization of the social elite with the final enslavement of the main part of the people, turned into a “population”. Peter chose the path of Western modernization. His empire lasted more than two hundred years. Russia became one of the great European powers and world centers of power, had stellar years. Has achieved serious success in world politics, economics, science, art and education. However, the price of betrayal of the Russian matrix turned out to be transcendent. All the deep-seated contradictions in Russia of the Romanovs were driven inside, carefully lacquered reality, but a new explosion was inevitable. This led to the 1917 civilizational and state catastrophe of the year.

Author:
Alexander Samsonov
Articles from this series:
The myth of the "wretched" Tsarevich Alexei
"Soft power" of the West in the era of Peter the Great

Ctrl Enter
Noticed oshЫbku Highlight text and press. Ctrl + Enter
We are
Results of the week. "Who you are lucky, in fact, and will carry a cock, and such a bird as you, I, too, will rush!"Results of the week. "Well, do not change me because of every idiot!"
Military Reviewin Yandex News
Military Reviewin Google News
304 comments
Information
Dear reader, to leave comments on the publication, you must sign in.