Children's letter from the war ... 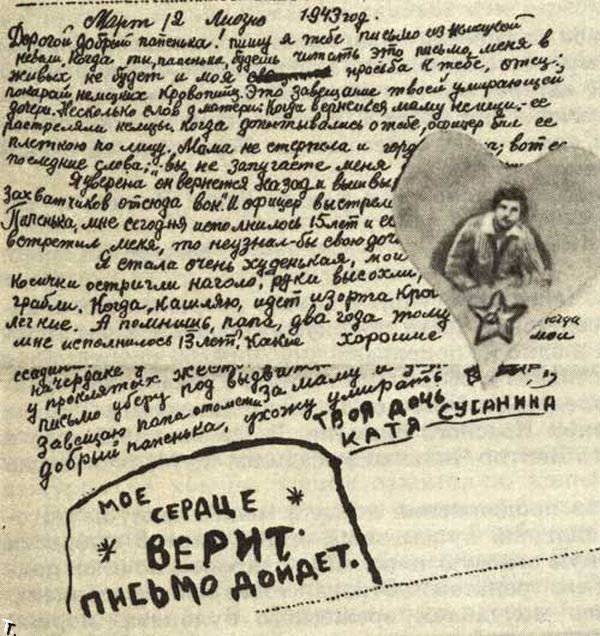 She was so desperate that she decided to commit suicide on the day of her 15 anniversary, but before that she wrote the last letter to her father. Reading hard, but very worth reading.
Unfortunately, the letter never got to the addressee, because the number of field mail, written by the girl, at that time is already outdated.

March, 12, Liozno, 1943 year.
Dear, good papa!
I am writing you a letter from German bondage. When you, papa, will read this letter, I will not be alive. And my request to you, father: punish the German bloodsuckers. This is the testament of your dying daughter.

A few words about the mother. When you return, do not look for mom. She was shot by the Germans. When trying to find out about you, the officer hit her face with a whip. Mom could not stand it and proudly said: "You are not intimidating me with beating. I am sure that my husband will come back and throw you out, vile aggressors, out of here." And the officer shot Mom in the mouth ...

Papa, today I turned 15 years old, and if you met me now, you wouldn’t recognize your daughter. I became very thin, my eyes were hollow, my pigtails cut my bald brains, my hands were dry, and I like rakes. When I cough, blood comes out of my mouth - my lungs are off.

Do you remember, Dad, two years ago, when I turned 13? What good were my name day! You, Dad, then said to me: "Grow up, daughter, for a great joy!" I played a gramophone, my friends congratulated me on my birthday, and we sang our favorite pioneer song ...
And now, papa, as I look at myself in the mirror - the dress is torn, in shreds, the number on my neck is like that of a criminal, she is thin, like a skeleton, - and salty tears flow from her eyes. What is the point that I turned 15 years. I do not need anyone. Here, many people do not need anyone. Hungry hungry, hunted by shepherd dogs. Every day they are led away and killed.

Yes, dad, and I am a slave of a German baron, I work as a laundress for a German Charlane, I wash clothes, wash my floors. I work very much, and I eat twice a day in a trough with "Rose" and "Klara" - that is the name of the master pigs. So ordered the Baron. “Russ was and will be a pig,” he said.

I'm very afraid of Clara. This is a big and greedy pig. She almost bit my finger once when I took out a potato from a trough.

I live in a wood barn: I can not enter the kolshat. Once the polka maid Jozef gave me a piece of bread, and the hostess saw and beat Bezfu on the head and back for a long time.
I ran away from the owners twice, but their janitor found me. Then the Baron himself tore off my dress and kicked me. I fainted. Then they poured a bucket of water on me and threw me into the basement.
Today I found out news: Jozefa said that the gentlemen were leaving for Germany with a large batch of slaves and slaves from the Vitebsk region. Now they take me with them too. No, I will not go to this thrice all damned Germany! I decided it was better to die on my own side than to be trodden into the damned German land. Only death will save me from cruel whipping.
I do not want to suffer any more the slave at the damned, cruel Germans who did not let me live! ..
Bequeath, dad: avenge my mother and me. Goodbye, good papa, I am leaving to die.

My heart believes: the letter will come.

Soon after the liberation of the Belarusian city of Liozno in 1944, a small yellow envelope sewn with threads was found in one of the houses during the dismantling of the brickwork of the destroyed furnace. It contained a letter of a Belarusian girl Katya Susanina, who was enslaved to the Hitlerite landlord. Delivered to despair, on the day of her 15 anniversary, she decided to commit suicide.
Before I died, I wrote my last letter to my father. On the envelope was the address:
"The current army. Field post number ... Susaninu Peter". On the other side the words were written in pencil: "Dear uncle or aunt, who will find this letter hidden from the Germans, I beg you, drop it immediately into the mailbox. My corpse will already hang on the rope."

The number of field mail, written on the envelope, is outdated, and the letter could not reach the addressee, but it reached the heart of the Soviet people!