March 7 2018
15
For the first time in many years, the DPRK leadership met with representatives of the South delegation in Pyongyang. The truly unprecedented phenomenon is the entry into the South Korean delegation of the head of the national intelligence of the Republic of Korea, So Hoon, whose main work, in fact, is related to the reconnaissance of the “North Korean secrets” relating, including the development of a nuclear missile program.


The delegation was personally received by the leader of the DPRK, Kim Jong-un, who declared that he considered the main goal of the country to be the unification of the motherland, and is ready to do everything for that. A start to “everything” is put in a verbal response to the letter of South Korean President Moon Zhe Ying, who actually invites a colleague from the DPRK to interact at the highest level. The letter of Moon Jae-Ina in Pyongyang was read by the representatives of the delegation of the Republic of Kazakhstan, and Kim Jong-un answered by agreement in principle. According to the North Korean leader, he called on the relevant departments to begin preparations for top-level negotiations. 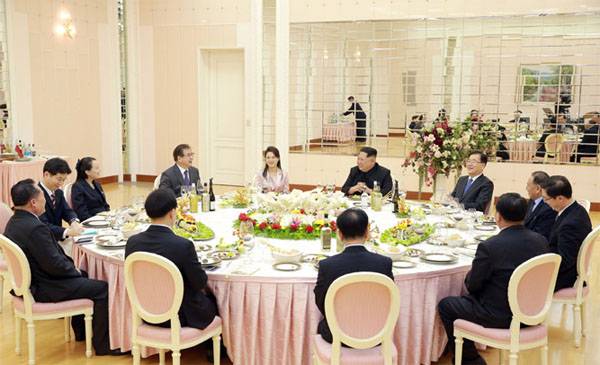 After this kind of information spread by the Central Telegraph Agency of the DPRK, the first, relatively timid, comments began to appear in the Japanese and American press. Japanese media said that the authorities intend to find out from their colleagues in Seoul about the details of their visit to Pyongyang and whether Kim Jong Un is really ready to sit down at the negotiating table. The American media was marked by articles in which they stated that such “progress” in the relations between Seoul and Pyongyang was observed thanks to the “sanctions imposed by the United States on the DPRK”.

Commented on the Pyongyang meeting Kim Jong Un with the South Korean delegation in Moscow. Deputy Foreign Minister of Russia Igor Morgulov at a meeting with the head of the parliamentary group of the Republic of Korea on peace and cooperation, Chon Don Yong, said that the Russian Federation will in every way promote the dialogue between Pyongyang and Seoul. At the same time, Igor Morgulov noted that Moscow welcomes the first steps of the two Korean parties towards each other and speaks exclusively for political and diplomatic measures to resolve the protracted conflict.

It is noteworthy that a few hours before the first news from the negotiating "fields" in Pyongyang, an information resource North38, tracking "nuclear" and military activity in the DPRK, published material in which it was announced that it received "evidence" of Pyongyang’s launch of a nuclear reactor. At the same time, the site routinely refers to data from American satellites, which recorded the appearance of steam over an object in North Korean Yongbyon. 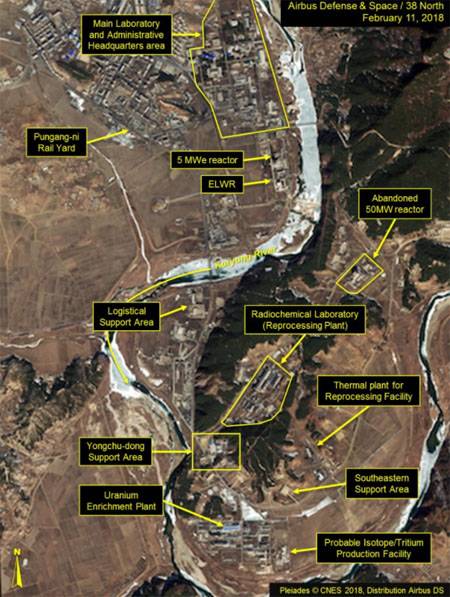 The estimated reactor power is 5 MW. As "evidence" of the reactor is not only the appearance of steam, but also the "melting of ice on the pond" at the reactor. However, there is no evidence that an increase in the volume of water used to cool the reactor was recorded at the facility in Yongbyon. It is this process that is one of the important indirect evidence that the reactor has actually been put into operation. Western experts immediately found the answer. The increase in the spillway was not observed, since "the cunning North Koreans created an additional water supply system that diverts water to a great distance from the object."

Also noteworthy is the fact that they themselves decided to publish the pictures taken in mid-February literally on the day of the meeting of the South Korean delegation with the head of the DPRK. It is quite possible that this is pure coincidence, but when you consider that the portal North38 does not provide information on a daily basis, then it is hard to believe in coincidence. In this regard, the promise is visible: “While someone is talking about positive negotiations, Pyongyang continues nuclear development. Alarm! "

However, the situation with the publication of “warning” images was somewhat crumpled by the head of the South Korean delegation, who visited Pyongyang, Jong Yi Yong, who heads the national security department under the President of the Republic of Korea.

According to Jong Yi Yong, Pyongyang declares its readiness to freeze nuclear missile tests in the event of the start of “honest and open negotiations” with Washington. Jong Yi Yong noted that the “North” promised to abstain from “military actions”.

After such a statement, the US media became particularly active, and more often than before they began to admire the effectiveness of the sanctions previously imposed on the DPRK. They say that the “rocketman”, as Kim Jong Un called, by the President of the United States, Donald Trump, spoke in a completely different way.

In fact, all the recent events on the Korean Peninsula, including a joint performance at some Olympics competitions in Pyeongchang, a single flag of two Koreas, a visit to Kazakhstan by sister Kim Jong-un, an agreement to send the South Korean delegation to Pyongyang hardly look like Korean initiatives. First of all, Washington, after numerous statements that American aircraft carriers are about to approach the shores of the DPRK and are about to make a rustle there, had to at least somehow be rehabilitated before those who are crazy about the "hegemon". Save, so to speak, face. After all, everything was drawn for the “hegemon” not in a very pleasant light: a very small state not only puts something there on the threats of Washington, but also threatens to respond, and with showing video clips with ICBM launches. In Guam, they have already begun to count the number of underground bunkers, and in Hawaii - to buy tickets for visiting relatives in continental states.

At the same time, the activity of Pyongyang led to clearly unplanned expenses from the US military budget, and the United States was accustomed to meticulously counting money, albeit from the heat of the heat printed. It was calculated how much additional missile defense elements were spent on Guam, how much it costs to convince the Japanese and South Koreans that their airspace is locked, and that no ICBM from Kim Jong-un will fly to them, how much does the missile defense itself cost the United States which silently contemplated how North Korean missiles flew over the heads of Japanese nationals.

Therefore, it is hardly worth believing that South Korea, on its own, decided to drop all the nuances of relations with the United States and look for contact points with the DPRK alone. By and large, this is an American project that focuses on one thing: to contain the DPRK, in which its nuclear missile projects have reached a completely industrial level. Restrain the process, delay the time, try to reassure the partners in the anti-North Korean block, plus - to announce that the sanctions have reached their goal, because, say, Pyongyang wins back. Judging by the newspaper publications in the United States, the latter is already actively spoken about.

It is unlikely that Pyongyang does not understand this, and certainly it is unlikely that they are ready to exchange the hypothetical promises of the American “cookies” for the completion of nuclear missile development. And it’s not in Russia's interests that Pyongyang make such an exchange. To get another “friendly” territory with American military bases at hand, and even with your own approval (as in the case of the agreements in Germany in exchange for yourself knowing that ...) it would be somehow very strange. That’s why Pyongyang can use the tricks that the United States has been using for a long time: spreading thought (cape) through the tree - about freezing trials and developments, about an open and honest dialogue, about willingness to contact the South authorities. But the goal is also being traced - to try to pull the United States into a conversation in which steps would be clearly indicated, as Trump likes to put it, for a possible deal. And the deal is unlikely to be the one used to in Washington: “you will do it, and we promise to do it.” Big historical the experience of other states in relations with the United States, after agreements with which many have ceased to exist, is an important reminder.