March 7 2018
56
David Goldfein - Chief of Staff of the United States Air Force. This man is looking through the sky. Peeps into the blackness of space. It is in space that he is preparing to fight. After a few years, the war in space will become a reality. Therefore, Washington should achieve superiority among the stars. 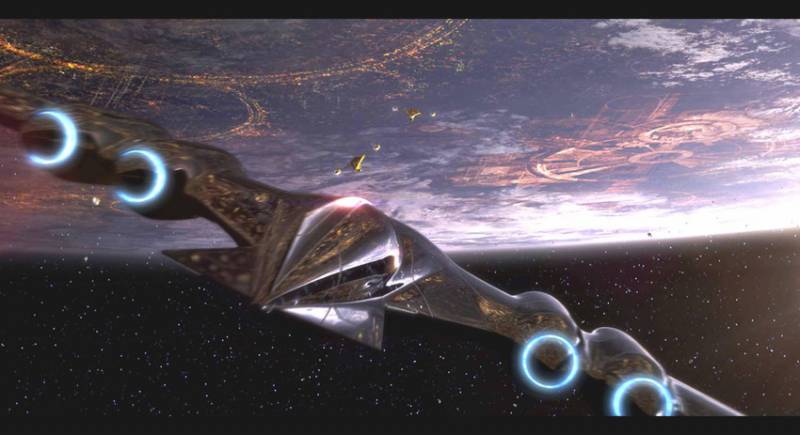 A note for special readers who like to shout: “Nonsense! Fake! Dumb humor! Lies! The author smoked! .. " The statements of the General Staff are not satire or fiction. About the future wars in space writes respected and quite serious edition of "Space News". The author of the publication is Sandra Erwin. Link to the source: here it is.

As for Goldfein himself, he told about wars in space not in the kitchen after evening whiskey, but at the next Air Warfare Association symposium in Orlando, Florida. And his main message was not to surprise the participants of the symposium with space military ideas, but to designate the topic of “investments” that would be needed to translate these ideas into reality.

Air Force commander Goldfein insists: the United States will "fight" for supremacy in space. According to the military official, to prepare for a war in space, the US Air Force needs new technology and needs retraining of commanders. This is what investment is required for.

The speech of General Goldfein turned out to be the strongest speech on the topic of "space wars", the newspaper notes. Space war has become an area that deserves "special attention from the US Air Force." Mr Goldfein told the audience consisting of flight personnel that they need to “start thinking about outer space just as they think about air space.”

According to the general, “for us, the military, regardless of specialties, it's time to strive for supremacy in space.” The pilots will have to strive for excellence "with the same zeal" as they demonstrate today "with regard to air superiority."

True, the chief of staff made a reservation: as long as we are not talking about that, the pilots will fly into a battle into space. But at the same time, warned Goldfein, the Air Force must be more thoroughly tuned in to what is happening in space. Space should be viewed as a place for future battles.

“I believe that in a few years we will wage war from space,” he said. “And we are the same branch of the military, which must lead joint military operations in this new disputed area.” This is demanded by the people! ”

Goldfein, recalls the publication, and before making such statements, speaking here and there. However, this time he adhered to much more decisive rhetoric when he spoke about the role of the Air Force in space war.

The broader premise of the general is that the Air Force must understand how to combine "air, space and the cybersphere." Only in this way a “complete picture” of the conflict will be obtained, the chief of staff believes. Goldfein clarified something: he noted that the US Air Force will have to “play at a catch-up level,” because cyberspace and space are becoming more and more “contested areas."

Goldfein is known as a proponent of "multilateral operations" and the idea that to win in future wars, headquarters requires intelligence from all "spaces": air, cybersphere, land, sea and space. The general is "looking forward" to discuss the topic of using new technologies. What technologies, he did not report, but said about the investment.

To prepare for a space war, the Air Force needs to invest in new technologies and in the training of commanders. Goldfein has already commissioned Lt. Gen. Steven Kwast, the commander of the air training unit, to develop a training program for officers and junior command personnel to conduct "space operations."

The strategy of switching the Air Force to space is also reflected in the budget proposal for the 2019 fiscal year, writes Sandra Erwin.

According to budget documents, the Air Force is “seeking” 8,5 billion for “space programs”: 5,9 billion for research and development and 2,6 billion for purchasing and launching new satellites. Air Force requests for 2019 fiscal year on 7,1% more than last year.

But will the US Air Force be able to conduct military operations in space and from space? Other Russian experts strongly doubt this.

Retired Colonel Viktor Litovkin commented on the speeches of the chief of staff of the US Air Force and noted that war in space is fundamentally impossible.

“I think,” he said radio. "Sputnik"- that the war in space is basically impossible, since it can mean the death of mankind. Therefore, Russia is seeking, through the United Nations (together, by the way, with China), the adoption of an international law banning the deployment weapons in space. And the statements of the American generals and admirals on this occasion speak of only one thing: their appetites are constantly growing. The US Army has already received a record budget, but I would like to receive more. ”

Litovkin believes that claims to world domination never ended well. Historical experience shows that such attempts can "end in disaster for those who started it all." But today, the US military "does not think about it," suggested a military expert.

They think, we note, they are about something else. About the Russians and the Chinese, who set out to "militarize the cosmos."

Shortly before David Goldfein's speech, Daniel Coats, director of US national intelligence, spoke. According to him, Russia and China are going to implement plans for the military use of outer space.

Coates's report was read on February 13. It was also published on the website of the Senate Intelligence Committee. The document contains allegations that the activity of Russia and China in space is a world threat. According to Coates, Beijing and Moscow will “combine” diplomatic efforts to preserve international agreements on the peaceful status of outer space with building up the potential for a space war.

“Russia and China continue to promote international agreements on the non-deployment of weapons in space and on the“ absence of the first deployment ”of weapons in space. However, many types of weapons will not fall under the scope of these agreements, and this will allow them to increase the potential for waging space warfare, publicly insisting that space should remain a peaceful area, ”Coates report quotes IA "REGNUM".

As we see, the reason for the arms race in space has been found. Russian and Chinese declared cunning enemies of the world in outer space.

For the Pentagon it does not matter whether a war is possible in space or not. Clearly, President Trump is following in the footsteps of Reagan. And new "star wars" will be announced soon. Spending on "defense" needs in the United States is growing rapidly with the appetites of the military and military-industrial enterprises, and few would be surprised if the Pentagon starts building something like the Death Star.

Observed and commented on Oleg Chuvakin
- especially for topwar.ru
Ctrl Enter
Noticed oshЫbku Highlight text and press. Ctrl + Enter
We are
Results of the week. “I have sawdust in my head. Long words only upset me. ”Situational analysis of the death of the MH17 flight (Malaysian Boeing 777), made on the basis of engineering analysis from 15.08.2014
Military Reviewin Yandex News
Military Reviewin Google News
56 comments
Information
Dear reader, to leave comments on the publication, you must sign in.