March 6 2018
14
Syrian government troops launched an offensive in the eastern Guta suburb of Damascus. Scream, howl, howls, sprays of saliva - brief история The media response of the “friends of Syria” to the CAA operation that began. Screaming and wringing hands is the same hysteria as in the case of the release of the Syrian army Aleppo. Nobody remembered about Rakka among the “friends of Syria”, when the American coalition organized Syrian Dresden there, and then it was quite another matter ... “The bloody Assad must leave,” “you have to pull the fangs out of the regime,” and everything.


For five days, the Syrian troops, along with the Russian military police, patiently waited at the organized "green" corridor for civilians to exit. But, unfortunately, did not wait. The reason is simple: the militants of “Dzhebhat an-Nusra” (* banned in Russia) and “Jaish al-Islam” * did everything during these five days so that the civilian population could not use the opportunity to escape, stop being held hostage. Militants hit the corridor with mortars, shooting through these barely 80 m "paths of life" from small weapons.

The result - the civilian population did not take place - except that several residents of Eastern Guta (including children) who were distraught with horror, were able to break through to Damascus in the dark of night.

For five days the so-called “moderate opposition” bombarded the humanitarian corridor - people died. The Syrian military command decided that this could not continue any longer - the cup of patience was overflowing, and it was time to send the “bearded boys” to where they themselves so want - to the long-awaited meeting with the “Guries.”

The operation began with a series of targeted airstrikes on the warehouses and logistics points of the militants identified by the intelligence on the outskirts of East Guta. Syrian Aviation In the sky, aviation was supported by the Russian Aerospace Forces, which prevented the concentration of al-Nusra forces * in the area of ​​the so-called median axis of the suburbs. Air strikes destroyed warehouses with weapons and ammunition, as well as armored vehicles "hidden" in shelters and the so-called "shaitan-mobili" equipped with anti-aircraft guns.

The beginning of the operation turned out quite swift. Government forces with the participation of special forces "Desert Tigers" decided to use the tick tactics when two dagger strikes were sent to the militants' line of defense: one from the Damascus side, the other from the eastern axis mentioned above, from the CAA units . At the same time, the militants initially offered the Syrian troops fierce resistance in the east of the suburbs of Damascus in order to prevent the release of several important settlements by the Syrian special forces adjacent to Eastern Ghouta.

Using aircraft and armored vehicles, the Syrian troops did not allow the so-called "moderate" to hold positions in the east and actually drove those in the direction of Mesrab and Hamoria. 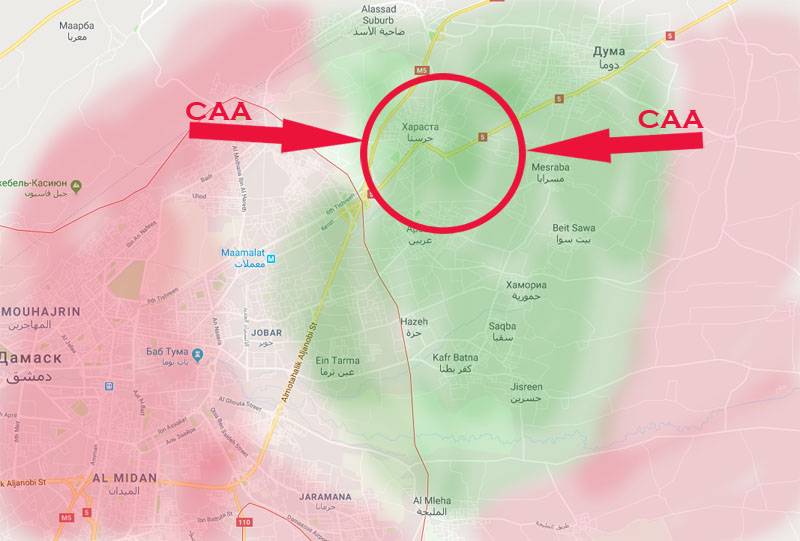 The onslaught of the Syrian army led to the fact that the advanced units managed to penetrate into the territory of Eastern Guta approximately 1,5 km from Damascus and approximately 2,5 km from the eastern front. These are the very ticks discussed above.

Further main attacks of the CAA are focused on the primary goal - the meeting of two avant-garde army groups in the quarter (settlement) of Harasta. It is Harasta that remains approximately 2-3-km across the width of the Damascus agglomeration section, along which, if the operation succeeds, the section of a large militant group will pass. By the way, the data on the number of "bearded boys" in Eastern Gute differ. If we are guided by the “arithmetic mean”, then we are talking about 10-12 thousand of militants.

Upon completion of a breakthrough in the direction of Harasta, the prospect opens up not only of dividing the militant group into two parts, but also of complete control over several key roads at once leading from Damascus to the north-east of the country. On these roads, partially controlled by the “moderates” and their main sponsors, in the direction of Eastern Guta, the main supply of terrorists went. And, not least, the missions of international human rights organizations were not allowed into the Eastern Guta by these militants on these roads. Only the day before, the UN humanitarian mission was able to reach the Damascus suburb and deliver humanitarian aid, which, of course, is not enough.

When planning the operation, it was clearly taken into account that the main forces of the militants are concentrated along the Doom-Harasta-Jobar highway. Thus, Harasta, as the key link in this line, is a strategic goal to eliminate the militant group in the whole of Eastern Gute. And if it is a link to isolate, then the whole "picture" will fall down.

The operation is also aimed at blocking the exit to the south for terrorists. This will allow to organize for the cut-off group in the south of East Guta a classic boiler. With the successful cutting of two transport arteries in the north of the boilers there will be two, and this is already a direct path to what was in Aleppo - the defeat of a terrorist conglomerate that had occupied the city for years.

But this is all theory. In practice, of course, everything is much more complicated. The main difficulty is the human shield of civilians, which the militants hide behind.

In order to minimize the inevitable losses among the civilian population, the cut-cake tactic is used. After the main phase of the operation (again referring to the variant of the operation for the liberation of Aleppo), the Syrian troops use armored vehicles breakthroughs supported by the infantry in the two mentioned hypothetical boilers. The goal is to divide the groups into such in size and power component, which will already prove incapable of providing any serious resistance to the SAR army. At the same time, through the cuts that formed the “cuts” on Eastern Guta, the civilian population gets the opportunity to leave the combat areas.

Certainly, there is no cost (there are already precedents) of a “disguised theater” - when militants in groups of civilians try to imitate a peaceful mood, going under the guise of “peaceful bakers and bread bakers”. And this CAA took place - in Aleppo and Deir-ez-Zor, when “innocent” bread-cutters were loaded, what is called, bundles.

Well, and, perhaps, the key nuance of the whole operation: after what time the “friends of Syria” will request the Geneva, Er-Riad, Amman (underline) truce with statements that they are going to leave by bus to Idlib, where they had long been going to “visit the grandmothers and grandfathers? ”. Especially since the reconciliation center has already declared guarantees of a safe exit for the militants. By the way, if Assad is still a “bloodthirsty tyrant,” is it not time for the CAA to “meet” all these buses with constantly plying militants who miss their grandmothers as it should? ..

Ctrl Enter
Noticed oshЫbku Highlight text and press. Ctrl + Enter
We are
Bashar al-Assad: In Syria, not the “revolution” that the enemies are talking about, but the revolution of the army and the people against terroristsSyria: Americans scare themselves, and Asma Asad buys chairs
Military Reviewin Yandex News
Military Reviewin Google News
14 comments
Information
Dear reader, to leave comments on the publication, you must sign in.