Nadezhda Likhatskaya is one of the angels of the Little Earth ...

March 8 2018
25
8 March we will congratulate our beloved women on International Women's Day. Let's leave our poor TV channels to sing the praises of rubber-botox "stars", juvenile nymphets, mediocre actresses and so-called, secular lionesses with a low level of social responsibility. Especially peculiar is the display of the foreign film “Pretty Woman” on this holiday. Apparently, according to the metropolitan producers in this tape shows a sample of our beautiful halves. However, this is not the first time when you turn off the disgusting TV box from disgust.


I want to recall those women, admiration for whom, in essence, created this holiday, proved its importance and continues to breathe life and a special expectation of this calendar day. These women, as they say, are real. The feminine face of war. Not having time to experience the joy of motherhood themselves, in the eyes of hundreds of fighters they were already mothers, although many of them barely crossed the threshold of coming of age. 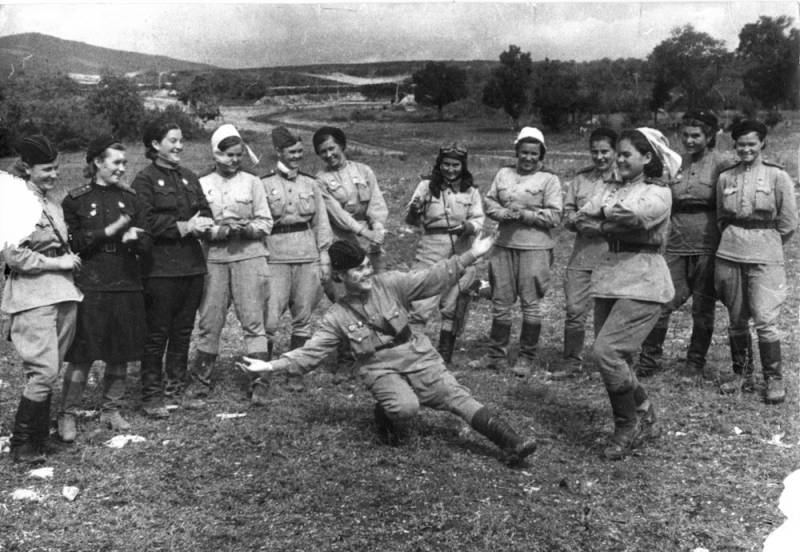 In Novorossiysk, as on all fronts of the Great Patriotic War, there were quite a few women. They included anti-aircraft gunners from the 454-th anti-aircraft artillery regiment covering the noble skydowners, and pilots of the 46-th guards night bombers of the aviation regiment, such as Hero of the Soviet Union Yevdokia Nosal, and just ordinary soldiers of the marines, who’re using sniper systems, they’re as a sniper, and they’re as a sniper. there were not even twenty years old), and, of course, nurses. 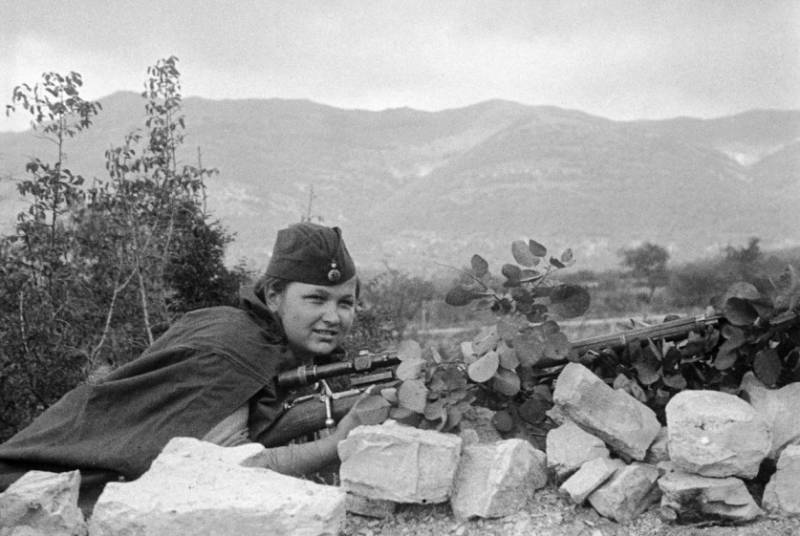 Elizaveta Mironova, soon after this picture she will die from wounds in the hospital

Each of them, of course, deserves a separate mention, but this material will focus on the nurses, these angels on the battlefield. Or rather, about Nadezhda Lihatskaya, who was appointed to the Kunikov airborne detachment and from the first days was in the very center of heavy fighting for the landlord of the land.

First, a few words about the specifics of the nursing service on the bridgehead of Malaya Zemlya. According to the recollections of the battle participants, the nurse was a fighter with an “expanded number of duties”. Titanic hard work in the hospital, the endless transportation of the wounded, most often on their own shoulders, the extraction of medical materials and water - only a small part of the duties of nurses. But in conditions of complete isolation from the "big land" and constant counter-attacks of the enemy, who sought to cut the defense of the landing force, improvised field hospitals themselves became firing points and the front edge of defense. At such moments, it was quite easy to see a nurse with a rifle, machine gun or grenades.

Another bright touch to the portrait of the small angels from medicine is one, though somewhat overgrown with fictional details, история. The fighter dying from his wounds asked the nurse to bring at least a little bit of dumplings before his death. In the situation that a kilogram of pressed black caviar, that a few dumplings are all from the realm of fantasy. But the nurse rushed to search. After two hours of throwing around the bridgehead, at the risk of being hit by shelling or simply dying from a stray bullet, the nurse returned to the hospital ... with ten ruddy dumplings. I do not know what the medicinal value of the dumplings is, but after that the fighter went on the mend.

Nadezhda Likhatskaya was an exemplary small-earth nurse. The very fact that she was taken to the Kunikov airborne detachment spoke for himself. Caesar Lvovich flatly did not want to take in a detachment of fighters without military experience, and experience of conducting military operations in the Black Sea. How strictly the major spent recruiting for the detachment, even George Sokolov described in his book “The Little Earth” (this book was published before the sensational Brezhnev book, because it is little known). Georgy personally witnessed how Kunikov categorically refused to the participant of the battles for Tuapse Nina Bondareva, because the nurses already had nurses who had been fighting in Odessa, Sevastopol and Novorossiysk. Among these nurses was Nadia.

In fact, Hope in the war was far from novice. At the same time, she was considered almost a veteran, since she was one of the few who had already “exceeded” in 25 years. However, despite her experience, she, like all the fighters of the squad, went through a tough “Kunik” training school. So neither Soviet rifle weaponNeither the enemy’s armament was anything unfamiliar to her. The nurses of the Kunikovsky detachment, as I already wrote, were guided both with a rifle and with a gun, despite the country of production. 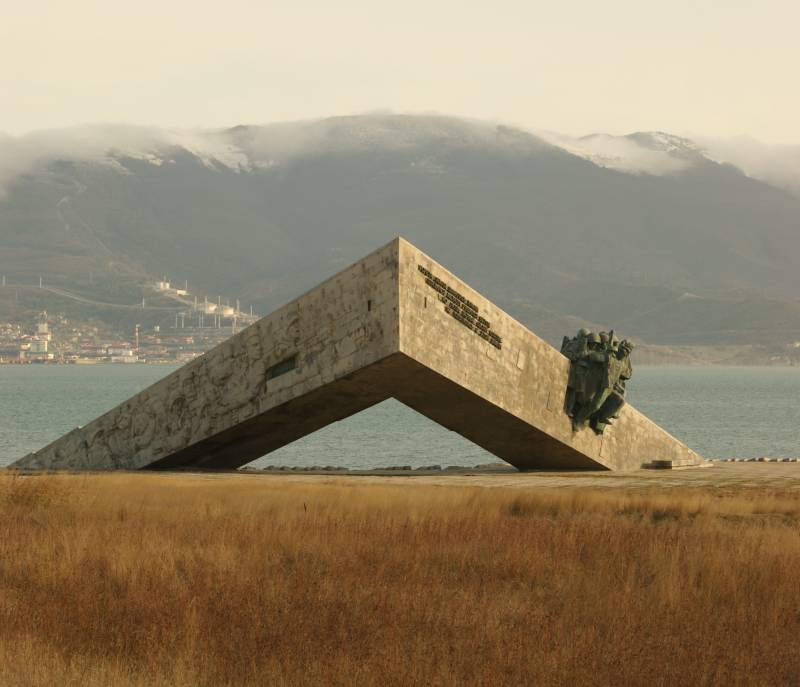 Now, at one of the landing sites, only the sea wind is walking, and in the spring evenings, when the storm does not rage, it is very peaceful here. And it’s hard to imagine that some 75 years ago here even the sea was boiling

According to open sources, Nadia was born in a distant settlement of Yuzovka (later this settlement will become a city, after the revolution a new name will be assigned to him - Stalin, and now we know this glorious city under the heroic name - Donetsk). One can only imagine how sometimes it was scary for a girl from a steppe town to see the raging sea abyss, and that is what strives to throw her overboard. But 4 February 1943 of the year as part of the landing groups Nadia rushed along with all on the inhospitable stormy coast. On the very first day, the nurse carried out from the battlefield, provided the necessary assistance and facilitated the evacuation of the 6 marines. It’s a lot or a little if everyone decides for himself, but only after under six continuous guns he pulls on himself six adult men. From 5 to 7 in February, Lihatskaya saved 15 fighters, and from 8 to 11 Nadia became the guardian angel of 25 to navy officers and officers. And this is all under constant mortar, artillery fire, accompanied by Nazi surprises from the sky in the form of bombs.

But this is “just” the direct responsibility of the nurse. But about what other trials fell to the lot of Nadezhda and her comrades in addition to saving the soldiers, they say less. After all, in the award lists, all this is usually hidden behind the wording "showed selfless devotion to the cause of the party" or something like that. Nor is it said that many nurses, including Likhatskaya, had the fate of an observer at the forefront during tank attacks, when the enemy was fiercely trying to throw our troops into the sea.

Nadia rarely got to be in the rear. Being in the 393 battalion of the marines of Vasily Botylev, a desperate then lieutenant commander, whose headquarters were sometimes less than a hundred meters from the enemy headquarters, Lihatskaya almost always was, as they say, "on the front end." A "hot" on the bridgehead was always, until the liberation of the city. At one of these critical moments, a kind of field hospital, which was simply the ruins of the house where the wounded were placed, was guarded from constant attacks by the Nazis only by the major medical service Laptev, the military commissar Dobushev and the nurse Nadezhda Lihatskaya. In addition to them, only a few wounded could keep a weapon, and even that was lying. 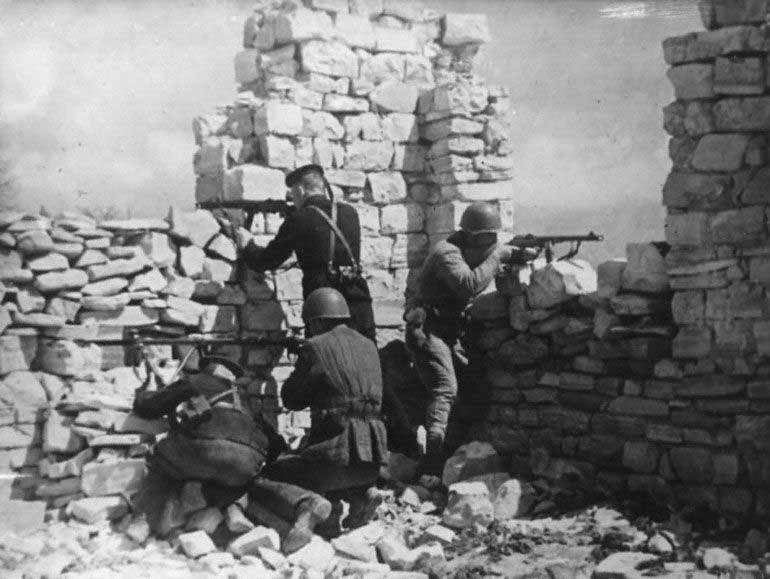 The firing line on the beachhead was not much different from some hospitals.

It so happened that as soon as Nadezhda dragged the wounded soldier into the medical service, another Nazi counterattack followed. Sometimes such counterattacks came almost to the walls of the “hospital”. In such a desperate hours, everyone who could at least hold a weapon and fire, even while sitting, even lying, felt it their duty to take up battle positions. But only many of these fighters already crawled with difficulty. And again Nadia went around her patients and gently asked who felt better. If the fighter confidently took up arms, the nurse took the guy over and dragged him to firing positions.

Nadia survived until the final liberation of Novorossiysk, and before the Victory over Germany, but she remained true to her profession in civilian life. And in a peaceful life, she finally did not have to carry a weapon along with the sanitary bag. 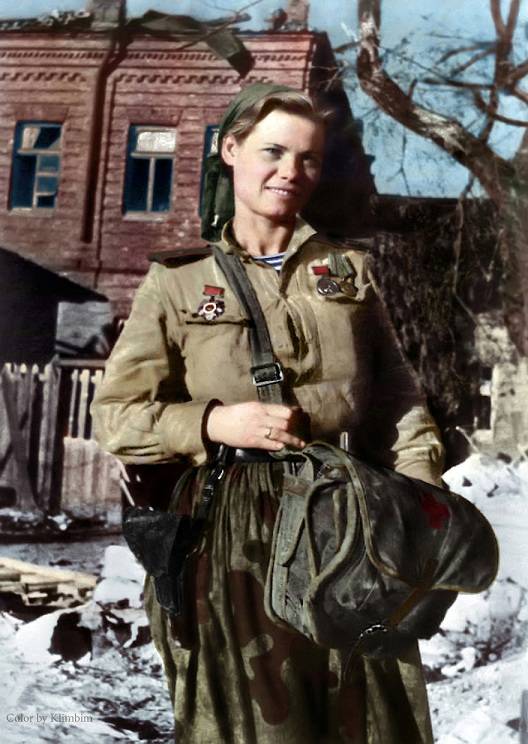 So why did the author decide to write only about Nadezhda Lihatskaya alone? First, why not. Secondly, little was written about her undeservedly, and after all her last name was also mentioned by Vice-Admiral Georgy Kholostyakov in their memoirs, and Starshinov, and Sokolov. And thirdly, I confess purely in male sympathy. Well, well, tell me how you can resist this infinitely charming smile with a slight sadness in the eyes of the 1943 photo of the year?

The photo was taken while fighting in the area of ​​the Wolf Gate (the “corridor” from the Tsemess Valley). Nadezhda was just awarded the Order of the Patriotic War of the II degree, and it vividly contrasts with the battered and burnt out gymnast. Modest, cheerful, smiling and our real woman ...

Ctrl Enter
Noticed oshЫbku Highlight text and press. Ctrl + Enter
We are
Poroshenko: "I asked my wife not to congratulate me on the holiday 23 February"Reports from the militia of New Russia for October 13 2014 year
Military Reviewin Yandex News
Military Reviewin Google News
25 comments
Information
Dear reader, to leave comments on the publication, you must sign in.