The end of an era of American ultimatums. EU and Russia united against USA

March 6 2018
39
Recently, the EU ambassador to the US, David O'Sullivan, made a statement that can be called the first sign of the political spring. There was a “spring” among the Arabs, and now it will strike Europeans who want to be free from American dictate. The European Union’s call for a boycott of anti-Iranian sanctions, conceived by the overseas hegemon, has caused considerable resonance in international diplomacy and in the world press. Is the era of American ultimatums coming to an end? And this process is accelerated by impulsive Donald Trump. 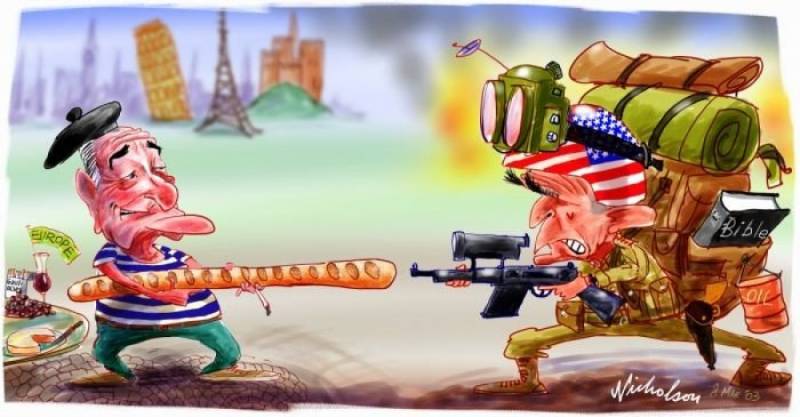 The EU Ambassador to the USA David O'Sullivan recently made a statement that was immediately dubbed in the Western and Russian press as a sensation. It’s no joke: the EU went with the Russians against the great world hegemon!

According to Mr. O'Sullivan, the Americans want to impose new sanctions against Iran, but these sanctions are "in good conscience" unjustified. And if so, the EU intends to boycott them.

According to Mr. O'Sullivan, who leads IA "REGNUM"“We cannot, with a clear conscience, impose sanctions again without a good reason.”

This statement, sensational in its diplomatic and political essence, has a background.

At the last UN General Assembly, the French ambassador, Gerard Aro, said: “Iran, China and Russia have made it absolutely clear that there will be no revision of the agreement, it works as it is.” Mrs. Mogherini confirmed: the nuclear deal with Tehran is working.

But the speeches on this issue representatives of Russia.

Deputy Foreign Minister Sergei Ryabkov defined the US strategy as “flawed and vicious”. Minister Lavrov noted the ultimatum of the US path: “... if you want to discuss any other issues concerning Iran, this should be done with its obligatory participation and on the basis of consensus, and not by ultimatums.”

The decision to postpone the introduction of new sanctions against Iran, Mr. Trump adopted on January 12. However, this does not mean that the White House and the State Department will continue to pull. It is not without reason that a probable exit from a nuclear deal and its “terrible flaws” are reported. ”

Earlier, last October, Donald Trump formulated his strategy for Iran. The President of the United States does not believe that Iran is implementing the agreement on the nuclear program. In connection with his own statement, Trump promised to seek changes to the agreement. Otherwise, the United States will cease to participate in the transaction.

Apparently, because of the intransigence of the Trump administration, a new meeting was held on the Iranian issue. More precisely, on the issue of the conflict diplomatic situation that has developed between the White House and the Iranian authorities during the reign of Mr. Trump, who considers Iran to be a state "sponsoring terrorists around the world."

As the TASS, officials from the European Union and the United States are planning to meet in Berlin to negotiate a Joint Comprehensive Action Plan on the Iranian nuclear program. A certain “European diplomat” told Reuters that the meeting was scheduled for March 15.

On the eve of the meeting, the aforementioned Ambassador David O'Sullivan held an event for the American press, the purpose of which was to explain the position of the EU, which opposes Trump's strong desire to prevent the Iranian nuclear deal.

David O'Sullivan's statements led edition «Bloomberg». In the publication N. Wadhams notes that the Europeans really "dug up the ax" and oppose the new sanctions against Iran. New sanctions would jeopardize the 2015 nuclear deal of the year.

According to the European Union’s ambassador to the US, David O'Sullivan, there are no problems that could become worse than turning Iran into a “nuclear state,” the ambassador said at a meeting with editors and journalists in the Washington-based bureau “Bloomberg”.

“And the first thing to do,” he said, “is to make sure that there is no nuclear weapons. But this is exactly what the agreement did, and is doing, in our opinion, now. It works".

However, in January, Trump "swore to back down" on what he himself considers the "worst deal" one can imagine. “Retreat” is scheduled for May 2018. A “retreat” will take place if the “shortcomings” of the transaction are not eliminated.

“This is the last chance,” said as Trump snapped.

Trump's words are not an empty threat. US officials focused their close attention on negotiations with their European counterparts. We are talking about attempts to limit Iran’s continuing development of a ballistic missile program. Meanwhile, the latter is clearly not prohibited under the agreement reached in 2015, signed with the United States and five other powers.

O'Sullivan says that the EU will not support the return of trade sanctions lifted from Iran when a nuclear agreement is adopted, on any other basis, for example, in punishment of Iran’s missile program or for “supporting terrorism”.

True, here O'Sullivan, rather, expressed his opinion, rather than voiced the official position of the EU. “In my opinion, this will not work,” he said. “We have lifted the sanctions that were part of the deal, and, speaking from a clear conscience, it is impossible to return these sanctions without a good reason.”

The EU ambassador also rejected Washington’s opinion that the 28 alliance of countries is not in a hurry to condemn Iran because it is afraid of risking a deal. The diplomat noted, not without irony, that in the United States there is a “real myth”, generated by some people concerned about Europe’s trade relations with Iran. Like, for the sake of selling several cars or several planes, Europeans are ready to "sell their souls." “We do not sell our principles in order to achieve success in several trade deals,” commented the behavior of the EU, Mr. O'Sullivan.

At the same time, the European Union will not do anything that would jeopardize a deal with Iran. This is “absolutely necessary for the national security of Europe,” O'Sullivan said, repeating once again that the EU will not “revise the deal” and will not do “anything that, in our opinion, will put the deal at risk.”

If you recall the comments of the Ministry of Foreign Affairs of the Russian Federation cited above, then it must be admitted: there is indeed an unusual situation. Against the United States on the same side today are the EU and Russia. And of course, Iran.

Will Mr. Trump go against the collective will of the European Union? Will Brussels and Washington encounter in a diplomatic conflict? If so, how will it end?

The new sanctions policy against Iran could lead to the decision of Iran to develop the very nuclear program.

In addition, the new sanctions, issued in a "one-sided" manner, could have an effect on the long-time desire of some EU countries to relax sanctions against Russia. If Washington decides for itself, without its “allies and friends”, what measures against whom to use, then the EU can take a unilateral decision and soften the restrictive measures taken against Russia.

Let's wait for 15 March. On this day, as it is expected, negotiations on the Iranian nuclear program will take place. The maximum period when Trump has to decide something on the Iranian deal comes in May. If the EU reaffirms its determination in March and May and the agreement with Iran is removed, this will mean that the era of American ultimatums is a thing of the past.