March 5 2018
6
JARD is American armory a company from Iowa, it is known mainly in the USA about its existence, this brand will not say practically anything to other lovers of small arms. At the same time, JARD presents a very extensive range of different rifles and carbines on the market, which definitely deserve attention, and some of them are real weapons exotic. For example, a JARD J68 carbine for a pistol cartridge made in bullpup layout.


JARD was founded relatively recently, it appeared in 2000 year. The company was founded by practitioner marksman Dean Van Marel, who decided to try his own strength also in the field of a supplier of various tuned trigger mechanisms for various models of small arms. It is worth noting that many people liked the trigger mechanisms offered by him, so JARD was able to earn a good reputation at the very beginning of its formation. The company is based in Sheldon (Iowa), it can be said that this is a weapons company from the American backwoods with a distinctive history and interesting weapon models.

Over time, the head of the company revealed in himself a design talent, thanks to which a small company from Iowa managed to become a supplier of its own and quite original models of firearms: rifles, carbines, and also its variations on the immortal automatic rifle AR-15 so popular in the USA for cartridges central and lateral ignition, but, most importantly, various models of weapons in the bullpup layout not only for rifle or intermediate caliber cartridges, but also for pistol ammunition . 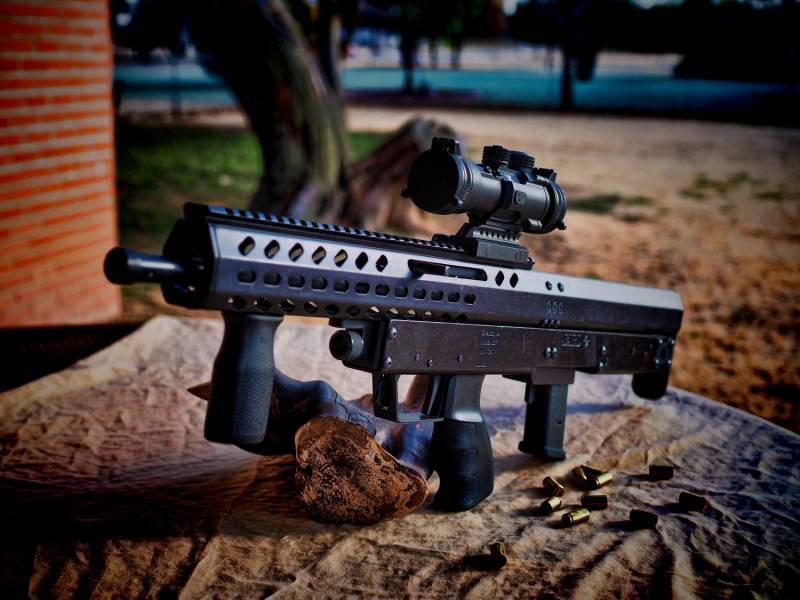 As the authors of the specialized weapons portal all4shooters.comJARD has a complete machine park with all the necessary equipment, including the production of barrels, which allows you to produce your own models of weapons. The company has implemented the principle “we do everything ourselves, right down to the last screw”.

It would be strange to imagine an American arms manufacturer, whose product line would not have its own variation of the American bestseller AR. The American semi-automatic rifle chambered for 5,56x45 mm AR-15 has long turned into one of the symbols of the states. It has been produced in series since 1963. The rifle goes on sale as a civilian weapon (not yet banned, but in light of the latter News, American arms legislation can still wait for change), weapons for hunting and self-defense. In addition, various versions of the AR-15 rifle are a standard weapon of the American police.

Like a large number of other American arms companies, along with a large assortment of parts for the AR family. The company JARD carries out mass production of its own clone of the famous AR-15. In this case, it is not about mindless copying a successful rifle. The model, presented by Van Marcel, has a number of features that distinguish the JARD rifle from a series of numerous AR-shaped semi-automatic rifles. For example, the J16 caliber .223 Rem (5,56x45 mm) is equipped with a skeleton-folding butt that makes the weapon very compact, while the spring return tube of most of the classic clones of AR-15 / M16 rifles, as well as the M4 carbine, does not allow ensure the availability of a folding stock. In addition, JARD offers customers its versions of AR rifles in unusual calibers, which contribute to attracting the attention of consumers. 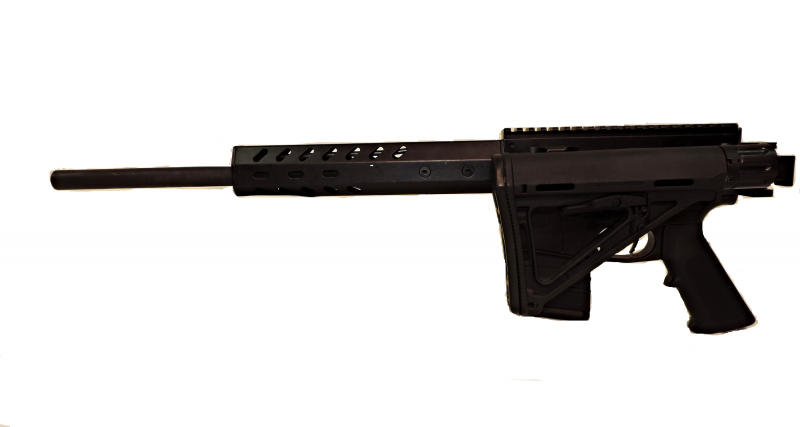 J16, photo: jardinc.com
One of the latest innovations of the company in an unusual caliber is the JARD J450 model chambered for .450 Bushmaster. This cartridge was obtained by rolling a 6,5 mm (.284) caliber sleeve under a heavy 11-mm bullet weighing about 16 grams. Thanks to this step, AR semi-automatic rifles obtained ammunition with phenomenal muzzle energy with moderate recoil force. At the same time, JARD offers the popular AR rifles in other calibers: .243 WSSM, .25 WSSM (J18), .22, (J22), .223 Wylde (J19C and "Canadian" J48), .17HMRXXMM (XXUMXC (X71C) and "Canadian" J23), .223HMRXXMX (XXUMXC) ), as well as an unusual “pistol” version of the JXNUMX caliber .XNUMX Wylde with a short barrel and no stock.

JARD also has a range of bolt-bolt magazine rifles from the J70 family. Bolt bolt is the abbreviated name of the longitudinally sliding bolt with manual rotation of the handle. Valves of this type help the shooter to lock the bore by inserting locking (combat) protrusions of the bolt stem into opposite grooves of the barrel or the receiver of the weapon. Due to the features and simplicity of design, such closures can withstand high pressure of powder gases, which allows the use of more lethal cartridges.

J70, photo: jardinc.com
Rifle JARD J70 family with a rotary bolt, lockable on 3 combat stops available to American buyers in versions with long and short receiver. Among the models presented are ageless hunting classics with a single lodge made in the style of the Remington 700 model, but there are also more interesting versions with a pistol grip, a tactical butt and an unusually thin forearm. The latest models are more focused on athletes and snipers. At the same time, the J70 family rifles are a kind of designer, from which, if desired, you can assemble a finished sample, based on the preferences and tastes of the buyer.

The JARD product range, among other things, has excellent trigger mechanisms for the Ruger 10 / 22 self-loading small-caliber rifles popular in the US. Such weapons are quite common in the states and are sold by millions of parties, as it helps young people to get the necessary skills to handle weapons and join the shooting. At the same time, the company also decided to enter the market with its model, presenting a rather nice J1022 rifle to the .22LR cartridge (5,6x15,6 mm), a small-caliber unitary ignition cartridge, to customers. This model is equipped with interchangeable trunks, a Picatinny-type rail and various design options for the lodge.


In the bullpup scheme

JARD's business cards and models that rightly attract a lot of attention include Dean Van Marel’s family of self-loading weapons, made in the bull-dad layout. The family is based on the idea of ​​a “single box” (chassis), which simultaneously performs the role of a receiver, barrel casing, forend and butt. This decision allowed the output to get a technological and simple design, which was reflected in a fairly reasonable price of JARD carbines and rifles. A similar approach was used by the British when they created the STEN submachine gun, the cost of which usually did not exceed 10 dollars apiece.

J68, photo: jardinc.com
At the same time, the consumer can also save on ammunition by choosing the JARD J68 model for a pistol cartridge (pistol ammunition is less expensive compared to rifle ammunition). This carbine is available at once for three options of cartridges - 9x19 mm, .40 S&W and .45 ACP, it is possible to use standard magazines from the Glock pistol. The extraction of the shells during firing is carried out downward, therefore, both right-handers and left-handers can use the carbine equally conveniently. A long Picatinny rail is installed in the upper part of the receiver of the weapon, the barrel is crowned with a non-removable muzzle brake-compensator. Also on the carbine are M-LOK mounting slots (modular system for attaching additional accessories to weapons, developed by Magpul).

Thanks to the bullpup layout, manufacturers managed to create a rather compact model of weapons. The total length of the carbine JARD J68 does not exceed 667 mm, barrel length - 432 mm. Weight - kg 3,4 in the version for 9-mm cartridge. It is curious that all three J68 models for different cartridges are sold at the same price and will cost the buyer a 899,95 dollar.

In addition to J68, there are other models of firearms in the Bulldog layout in the JARD product line. For example, the JARD J12 model may be of interest to the Russian audience - this is a smooth-bore 12 caliber carbine, which can be used with stores from Russian Saiga carbines made in Izhevsk. The semi-automatic model JARD J56 is made in the .223 Wylde caliber; cartridges are powered from standard magazines from rifles of the AR family. In turn, the J1023 model in the .22LR caliber is a special chassis for reworking Ruger 10 / 22 carbines into small arms, made in the bullpup layout.

A peculiar cherry on the cake in the JARD product line is the J51 self-loading large-caliber rifle chambered for .50 BMG (12,7х99 mm). This model is also built in the ideology of a “single box” in all senses of this meaning. When looking at the rifle, the famous German expression “quadratisch, praktisch, gut” comes to mind. In this case, the rifle was made not in the bullpup layout, since its 10-charging magazine is located in front of the pistol grip. This model replaced the former semi-automatic rifle JARD J50, which appeared on the market in 2008 year, for a long time it could be called the flagship of this company from Iowa. When creating the 12,7-mm rifle J50, the designers used an automatic system similar to the AR15 / M16, adapting it to use the powerful large-caliber cartridge 12,7x99 mm. The rifle's mass was about 11,5 kg, powered from detachable box magazines designed for 5 cartridges.

In this regard, the new J51 rifle, externally possessing a recognizable appearance thanks to other JARD models, made in the bullpup layout, attracts primarily with its small mass, which is not typical for rifles of this caliber. With a total length of 1473 mm rifle and 762 mm barrel length, it has a small weight, only 9,07 kg, which in itself seems to be a great achievement without taking into account other characteristics of this model.