March 5 2018
804
“My name will be slandered, many misdeeds will be attributed to me. World Zionism will strive with all its might to destroy our Union, so that Russia will never rise again. The edge of the struggle will be aimed at separating the outskirts from Russia. With particular force, nationalism will lift its head. Many pygmy leaders will appear, traitors within their nations ... ”
I. V. Stalin


"Stalin is the center, the heart of all that radiates from Moscow all over the world."
French writer A. Barbusse

65 years ago, 5 March, 1953, great national leader Joseph Stalin passed away. The man who was able to revive the Russian empire in the form of the Soviet Union, who won in World War II, created powerful armed forces, the nuclear shield of our Motherland, the best science and education in the world.

In the “democratic Russia” created in 1991-1993, he was declared a maniac and a bloody dictator. Why is Stalin so hated by various Westerners, liberals and parochial nationalists? The answer is simple. Stalin was a true national leader who devoted his whole life to solving global and national problems of the Russian civilization and the Russian people. He forced to serve the Motherland without sparing himself the government and the Communist Party. After death, he left no riches, no accounts in foreign banks, no palaces and villas, no stolen billions and gold. His treasure was the Soviet superpower.

The most important thing: Stalin showed the main road of the future great Russia (USSR) and all mankind - the society of the “golden age”, the society of social justice, service and creation. A society dominated by ethics of conscience, and the person is the creator, creator, serves the motherland and the people. Stalin showed an alternative way of development of all mankind. The masters of the western project and civilization are building an unjust world order — a global slave, slave-holding, caste civilization, where there are a bunch of “masters of life and money”, “elect” who are allowed everything and who have access to true knowledge, the most advanced achievements of science, technology, medicine. And the rest of the people are immersed in the darkness of poverty, do not have access to normal education and health care, constantly intoxicated with various drugs: tobacco, alcohol, heavier drugs, food substitutes, information-virtual illusions, etc. Their life span is consciously reduced, spirituality , intellect and physical condition are suppressed, descend to the level of two-legged weapons, cattle.

At the same time, Western “elites” are constantly developing and implementing plans to reduce human “biomass”. So that more resources remain “chosen”, so that you can create a clean planet, without bipedal “viruses” that kill the Earth. This is junk food, and planting people on drugs, with the suppression of normal immunity and the lack of normal programs for the physical and spiritual development of people. This is the creation of a society of stress, where people spin like squirrels in a wheel, extracting resources for a “normal” life, but in reality they are losing mental and physical health, sitting down on stimulants and dopeful people to temporarily forget. It is also a consumer society, which destroys both the planet, its biosphere, and man himself, as part of a common living system. A person is transformed into an animal consumer completely dependent on the “masters of life”. This is a system aimed at destroying the reproduction of humanity - the promotion of abortions, contraceptives, ideas of childlessness, homosexual marriages, various perversions (perverts do not give birth to children), virtual sex, on-line sex robots, etc.

Under Stalin, the USSR began to build a just state and society, a society of service and creation, a society with the domination of the ethics of conscience. Hence, the most powerful spiritual national impulse, which allowed not only to create a superpower, to win in the most terrible stories mankind war, but also to eliminate all the consequences of the most brutal world slaughter, to create a socialist camp, which allowed to confront the Western world, relying on their colonies and semi-colonies. Popular support allowed building an independent national economy, supplying all the necessary Soviet people and even supporting the allies, creating the best armed forces in the world, eliminating the threat of a new open large-scale attack on the USSR-Russia for several generations (most of the people of Russia live in the world only because of this foundation ), to create the best in the world science, education, a system that reveals the creative, creative potential of children and young people, and much more.

The common people idolized him during the life of Joseph Vissarionovich. They sang songs about him, put monuments to him, appropriated his name to cities and large enterprises. Stalin and his government embraced a shattered and ruined Russia, which went through the catastrophe of a previous development project in 1917. The Bolsheviks (Russian communists), contrary to popular belief, had practically no relation to this catastrophe, they had simply taken power in the lost “old Russia”. They offered the people a new project - the Soviet civilization, which was in the interests of the overwhelming majority of the people. They managed to create a Soviet superpower - they returned most of the lands they lost during the years of turmoil, defeated Japan and Germany, to whom Tsarist Russia lost. The Soviet Union included half of the planet, including China, in its sphere of influence. During the years of Stalin’s reign, the national economy was rebuilt, becoming more efficient than those of the leaders of the capitalist world, created advanced industries that had only the most advanced powers - aircraft, shipbuilding, mechanical engineering, machine-tool construction, chemical industry, military industrial complex, rocket production. Created nuclear weapon and created the foundation of the space industry. Eliminated unemployment, education and health care became free and accessible. Under socialism, children from poor peasant families who had no chance under capitalism became professors and marshals, pilot-aces and ministers.

Under the leadership of Stalin, World War II was won, when the masters of the West allowed the German Nazis, led by Hitler, to take power in Europe. The masters of the West were afraid of the Soviet project. Russia was becoming an alternative center for a new just world order. The sympathies of a significant part of humanity, the best people of the Earth, were on the side of the “solar” Soviet civilization. As a result, in essence, the “European Union” was created, led by Germany and all its power - military-technical, demographic and economic was thrown against Soviet civilization, which challenged the domination of the West over the planet. However, the Russian (Soviet) army defeated a strong and cruel enemy. The eastern and part of Central Europe, including East Germany, has come under the influence of Moscow. The Soviet Union defeated militaristic Japan, taking revenge for the shame of the Russian-Japanese war 1904-1905. and regaining its influence in the Far East. With our help, the Communists won in China and the Celestial Empire recognized the USSR as the “elder brother”.

Stalin did not flinch before the atomic threat from the United States, which conducted a bloody "test" of nuclear weapons in Japan. Moscow had such powerful armed forces that the United States and Britain and the allies did not dare, immediately after the end of World War II, to launch the “hot” Third World War (although there were plans). Soon Moscow created its atomic bomb and quickly created a first-class nuclear arsenal. The West began the “cold” Third World War - an informational, ideological, economic, secret war of the special services, a war on the territory of other countries (the Korean War, etc.).

Therefore, our enemies in the West and Russian Westernizers, who betrayed the USSR and the ideals of socialism, social justice, and hate Stalin. They created a mass of black myths to slander the great popular leader. However, the truth finds its way even in the atmosphere of total lies. Therefore, the image of Stalin is now again popular among the Russian people. During his reign, people had faith in social justice, in the future of the people and the country. A powerful economic, scientific, technical, educational, cultural and military foundation was created, which allowed Russia to live to the present day.

Even the outspoken enemy of the Union and the irreconcilable anti-communist, the famous British Prime Minister Winston Churchill, speaking in the House of Commons on December 21 1959, on the day of Stalin's 80 anniversary, recognized his outstanding role in the world: and the cruel times of the period in which his life passed. Stalin was a man of extraordinary energy and inflexible will power, sharp, cruel, merciless in a conversation that even I, brought up here in the British parliament, could not oppose. Stalin primarily possessed a great sense of humor and sarcasm and the ability to accurately perceive thoughts. This power was so great in Stalin that it seemed unique among the leaders of all times and peoples. Stalin made the greatest impression on us. He had a deep, devoid of any panic, logically meaningful wisdom. He was an unsurpassed master to find a way out of a most hopeless situation in difficult moments of his journey. In addition, at the most critical moments, as well as at the moments of the celebration, Stalin was equally restrained and never succumbed to illusions. ” 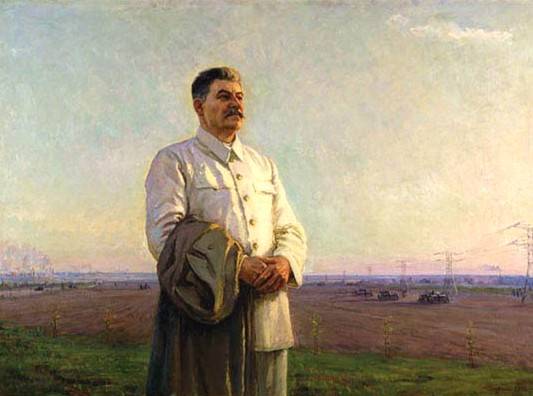 F. Shurpin. The morning of our Motherland. Xnumx

Ctrl Enter
Noticed oshЫbku Highlight text and press. Ctrl + Enter
We are
Results of the week. "Well, do not change me because of every idiot!"Yuri Drozdov: Russia prepared the role of the sacrificial calf
Military Reviewin Yandex News
Military Reviewin Google News
804 comments
Information
Dear reader, to leave comments on the publication, you must sign in.