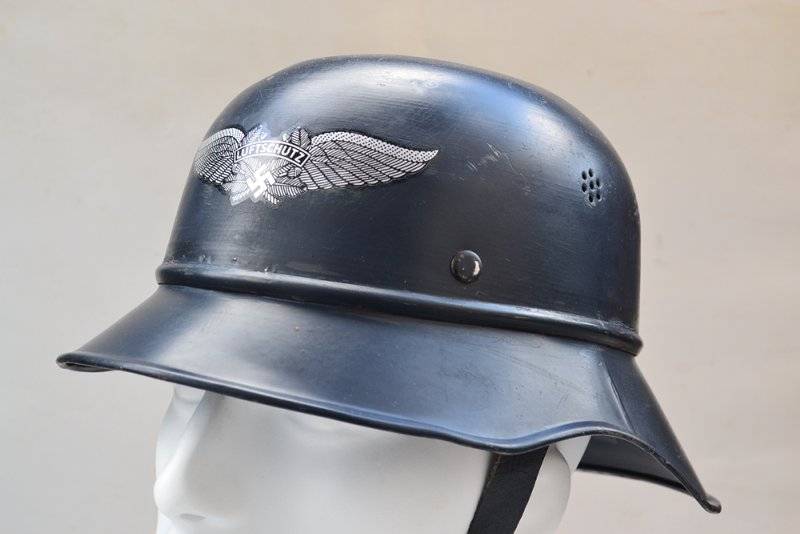 Starting the topic of head protection with the Soviet 1938 air defense helmet of the year, upon the recommendation of readers, I will move on to my colleague from Germany’s air defense, which by a strange coincidence also called the M38, but better known as the “Gladiator”, or Luftschutz helmet.

The helmet is very famous, mainly for many photos. The first half of the Berlin Air Defense War, for example, didn’t strain too much, why not take pictures? Then, of course, it became worse in all respects. 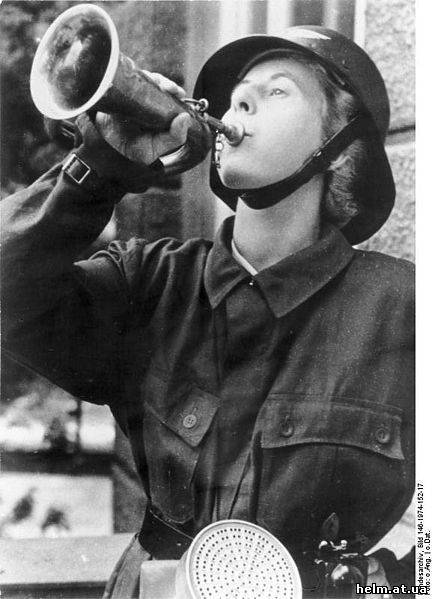 In general, the Germans with the air defenses dealt in a big way.

Back in 1923, the Union of Air Defense Reichsluftschutzbund ("Reichsluftshuttsbund"), or RLB (for short), was formed on a general wave. By 1933, the union took on a final look, and in 1943, the 23 consisted of a million Reich citizens. 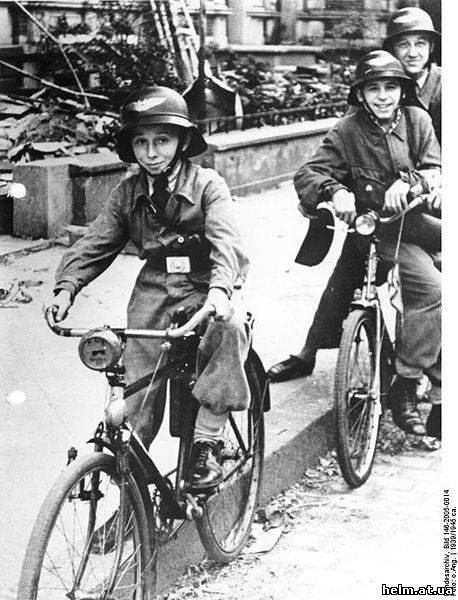 The RSL, which was under the control of the Ministry of Air Traffic, was engaged in the propaganda and training of the population in the basics of air defense throughout the territory of the Reich. The Union enjoyed special patronage from the industrialists who produced gas masks, chemicals, building materials and protective equipment. Why - it will become clear a little later.

The RLB had three whole editions: Reichsluftshutz, Deutsche Flyuglustrirte and Siren. The essence and content is clear: the need to strengthen and improve air defense, with all sorts of advice and guidance, and, of course, with a lot of advertising. 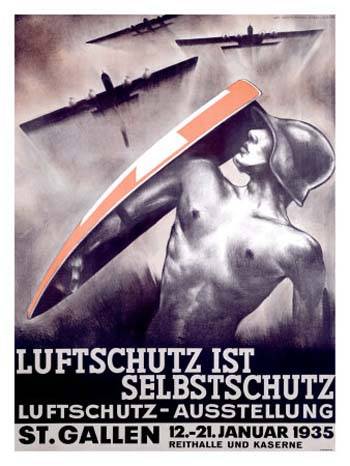 The Union ensured that the entire population of Germany received appropriate training, including a series of lectures with watching movies and several practical exercises. The union was rather numerous: 20 of millions of Germans entered it.

In addition, there were two organizations in the Reich air defense system itself, whose functions included notifying citizens about the approaching air attack and assisting the victims. 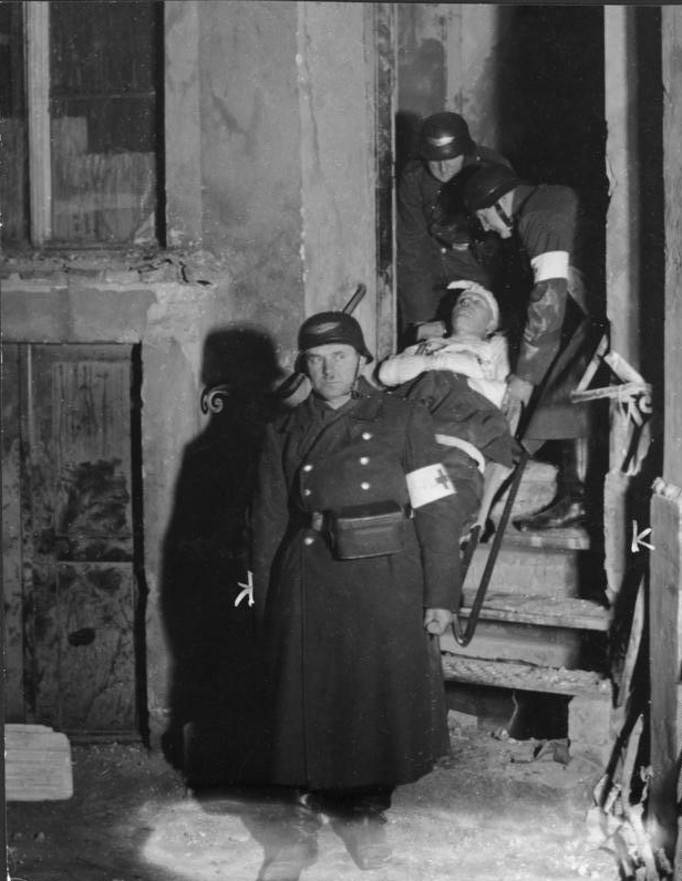 Both formations were created shortly after the start of the bombing of German cities aviation allies. These are Sicherheits und Hilfsdienst, a security and relief service, storage, and Luftschutz Warndienst, an alert service, LSW.

Service in the storage system was equivalent to military service and was a kind of alternative service. The warning service of the LSV was subsequently taken over by the police.

As an organization, the RLB was subordinate to Göring. On-site personnel were led by air defense personnel, but with a few exceptions, the staff mainly consisted of civilian volunteers.

Well, actually, we turn to the object of our story, that is, to the steel helmet of the air defense or the "Gladiator".

The basis for the new German helmet in general was the development, which were conducted under the guise of creating a protective helmet for civilian structures: police, firefighters, civil defense. The reason is clear: the Treaty of Versailles and its limitations. As a result, the M34 helmet appeared, which became the starting point in the development of all other models. 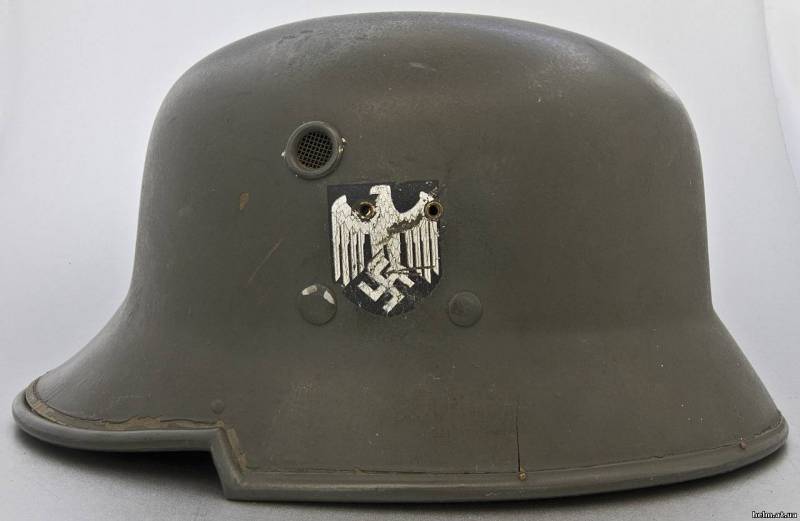 Yes, in 30-e years, the technology for the manufacture of plastics by vulcanization has already spread, so the helmets from fiberglass were, of course, a novelty, but not something out of the ordinary.

1938, on the basis of the M34 model helmet, was created a special helmet for the Luftschutz air defense units, which received the name “gladiator” in collector circles because of its original shape.

The main sphere of the helmet had a form similar to the M34, and the conical fields were significantly modified. This is logical and justified primarily by protecting the head from falling from above. 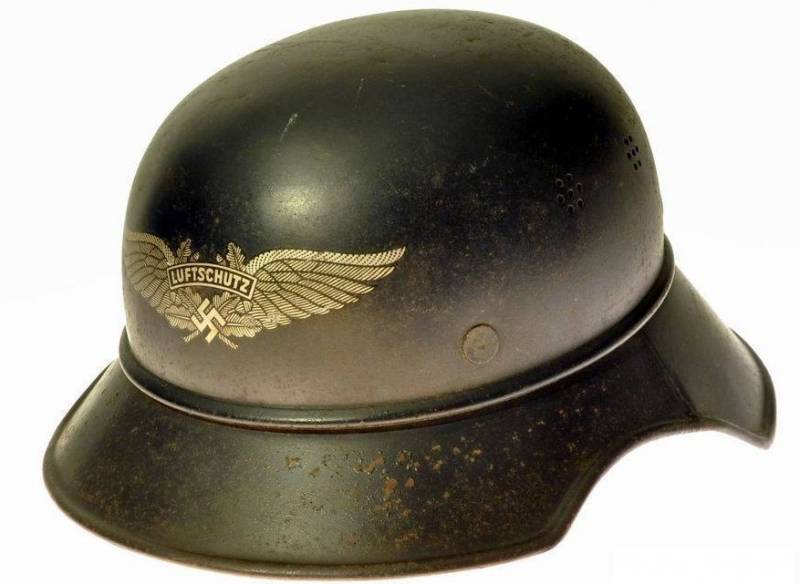 In general, the M38 had so many varieties. In the first place, this was due to the fact that the RLB units were not military. 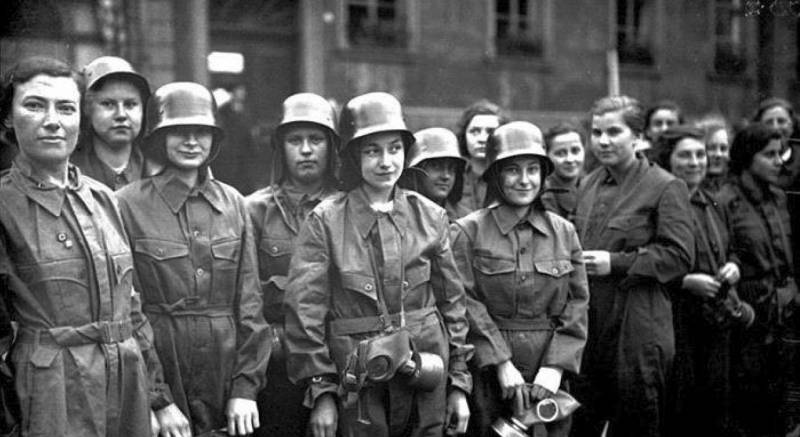 In addition to air defense units, "Gladiators" were successfully used by other organizations, for example, Volkssturm.

In Germany, in 1943-45, in addition to air defense forces, assistants from the RLB, ordinary citizens united into voluntary air defense squads, which provided protection for their homes and districts. 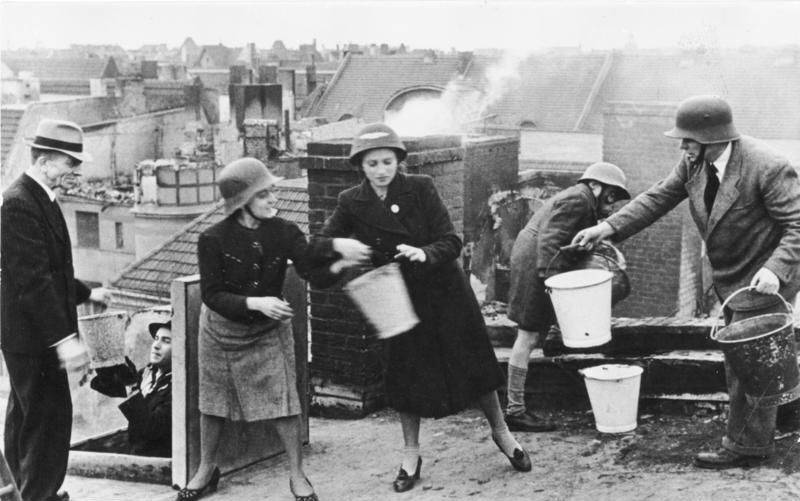 And here is the most interesting difference between Germany and the Soviet Union.

The German state offered the members of these teams to buy the necessary equipment, including such helmets!

How, by the way, first-aid kits and everything else. 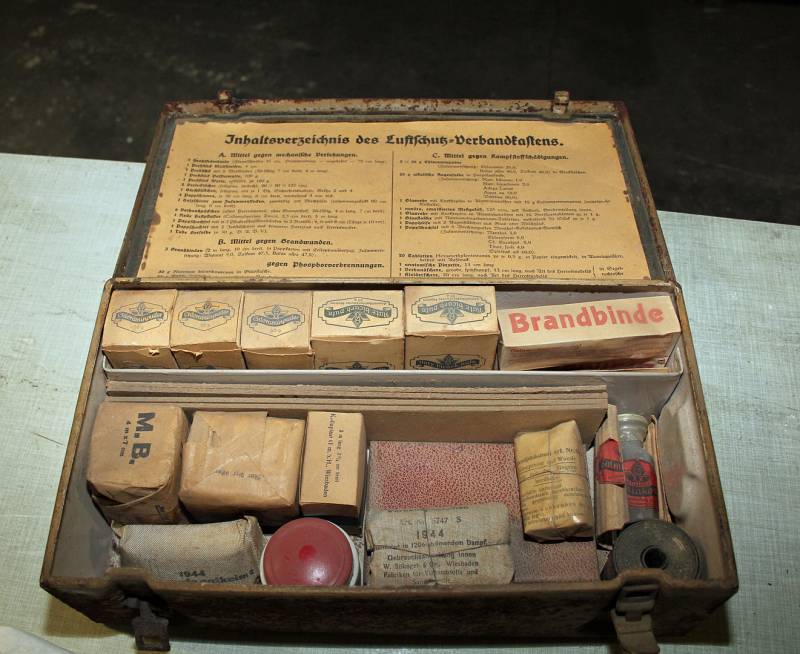 Closer to the beginning of the Second World War, M38 was stamped from alloyed carbon steel with the addition of molybdenum. Sheet thickness ranged from 1 to 1,15 mm.

The helmet maintained pressure up to 220 kg per mm², which provided protection even from large fragments and (partially) from pistol bullets.

With the beginning of the war and increased spending helmets began to be simplified. Manganese silicate was used instead of molybdenum, air vents were made by stamping, rather than individual parts, as before.

And since 1942, alloy steel and manganese in the manufacture of helmets were generally abandoned. Good steel was required for tanks. Helmets began to be made of absolutely ordinary steel, rolling the edges of the helmet was replaced with a simpler flanging.

It is very similar to the Leningrad blockade ersatz, which was made of ordinary steel in a conventional factory, in the workshop for the production of enamelware.

Helmets wore a variety of emblems: the general emblems of LW, the various-sized emblems of Luftschutz on the front of the dome (silver and less often of gold), the emblems of large enterprises, which structurally belonged to the air defense units. 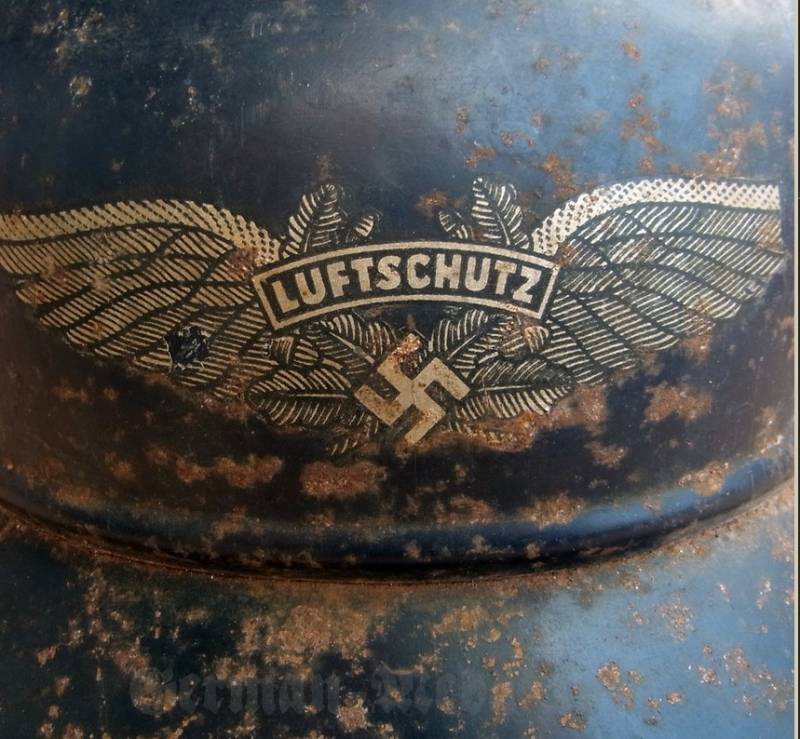 In general, comparing history two helmets worth saying one thing. Very much in common.

But in the encircled blockade of Leningrad, the release of ersatz helmets was a temporary phenomenon, and, as soon as the blockade was broken, they forgot about the "blockade". They were replaced by SSH40.

But in Germany, the situation was completely different. And with the beginning of the war, practically the release of normal steel helmets in our understanding was stopped. And they were replaced by ersatz helmets. What did not have a positive effect on the work of the Reich air defenders. But we do not feel sorry for them, of course. 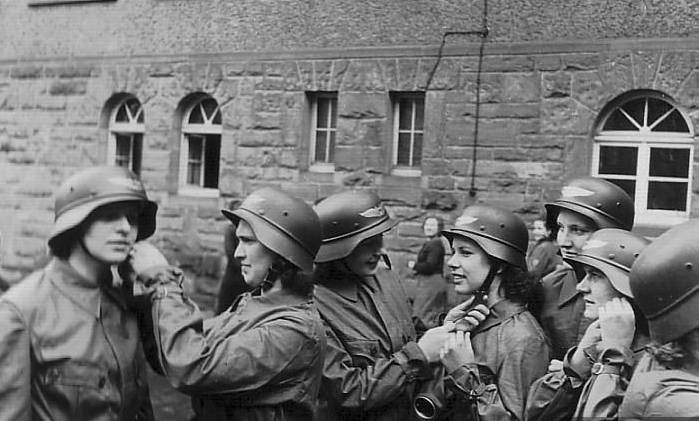 And, of course, the sale of helmets to the inhabitants of a belligerent country who help the army is, excuse me, the height of cynicism with a capitalist face.