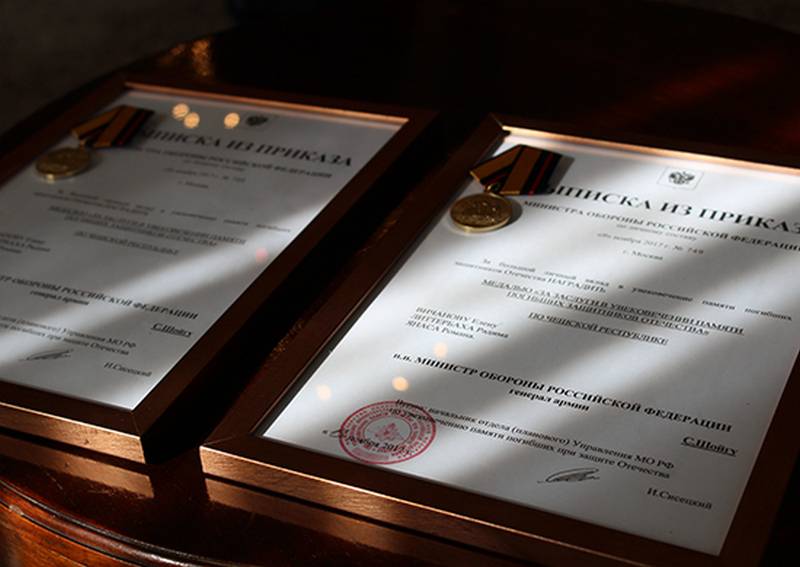 Welcoming remarks were made by Valery Konnov, Head of the Representative Office of the Russian Ministry of Defense for the organization and conduct of military memorial work in the Czech Republic

We invited you here to thank you for the voluminous and multifaceted work you are doing, which aims to preserve historical the memory of those who liberated Czechoslovakia from Nazism, who gave their lives during the Napoleonic Wars and during the First World War
- Valery Konnov noted in his speech.

Coordinators of the organization Czech Union of Fighters for Freedom, civil activists Yelena Vychanova and Radim Litterbach, who are marked by the distinction, are the initiators of the restoration, repair and improvement of monuments and memorials that perpetuate the feat of the Red Army soldiers who died during the liberation of Czechoslovakia in the Usti region in the north of the Czech Republic. With the participation of local authorities and the regional administration, as well as donations from Czech citizens, they are working on the restoration and improvement of Russian military memorials.

Elena Vicanova and Radim Litterbach repaired five monuments to the soldiers of the Red Army: three in the districts in Usti nad Labem, in the settlement of Male Brezno and in n. Foytovice, Ustetsky region. At the end of each repair, activists organize solemn ceremonies for the opening of monuments involving the guard of honor, orchestra, Russian and Czech media, which are held with the support and participation of local and regional administrations.

Currently, Elena Vichanova and Radim Litterbach are working on a large-scale reconstruction of the monument to the Red Army liberators in the center of the resort town of Teplice. The opening of the renewed memorial will be timed to the celebration of the 73 anniversary of the victory in the Great Patriotic War and the liberation of Czechoslovakia.

The medal “For merits in perpetuating the memory of the fallen defenders of the Fatherland” was also awarded to local historian Roman Janas from Chesk Wes of the Olomouc Region, who for 10 years has been actively engaged in search activities in the north of Olomouc Region (Jeseníky region), identifies the names of Soviet prisoners of war who died in Nazi labor camps in the Sudetenland.

Roman Yanas has established more than 1400 names for dead prisoners of war from the USSR, Poland, France, Great Britain and New Zealand and attracts students from local schools to search work. He verifies the lists of the dead, works with paper and electronic archives abroad, searches for relatives of prisoners of war around the world and creates a file on all prisoners, including biographies and photographs of prisoners, and publishes booklets with information about them. In his hometown of Česká Ves, he opened a museum about prisoners of war who worked in labor camps in this area, where he placed his own labor camp maps, weapon and the military uniform of those years, regularly holds film screenings and lectures in the museum. It monitors the state of the forest cemeteries of Borek, Raïviz and Bela pod Pradedem, in which dozens of soldiers of the Red Army who died in German captivity are buried. Every year, Roman Yanas organizes memorial actions at these memorials.

As of today, 903 Russian (Soviet) military graves are located in the whole of the Czech Republic. In their daily care, the representative office of the Ministry of Defense of Russia in organizing and conducting military memorial work in the Czech Republic actively cooperates with Czech state institutions, municipal authorities, public organizations, archives, museums and just volunteers who care about the memory of fallen battles.

Ctrl Enter
Noticed oshЫbku Highlight text and press. Ctrl + Enter
We are
Ministry of Defense awarded medals to three citizens of GreeceThe Czech army prefers the Puma BMP and is looking for a replacement for the T-72 tank.
Military Reviewin Yandex News
Military Reviewin Google News
6 comments
Information
Dear reader, to leave comments on the publication, you must sign in.