April 26 2012
10
In 1909, the Hotchkiss company introduced two light machine guns weighing 7 and 10 kilograms to the market. They were made on the basis of an easel machine gun of its own design. Gunsmith GAU Artkom department immediately decided to test the "heavy model" with a radiator and quick-change barrel in Russia. And although the tests carried out at the Gun range were discontinued due to the breakdown of the receiver, the Armory department, "given ... the distribution in the armies of foreign countries along with the machine gun and submachine guns" (Japan, USA) decided to continue the tests, and issued order for 3 more guns "Hotchkiss". In 1912, the company introduced a “model for air fleet"Having a pistol grip instead of a stock, a special sight and a swivel mount. On July 23, 1914, the company sent 4 sets directly to the Officers Rifle School. 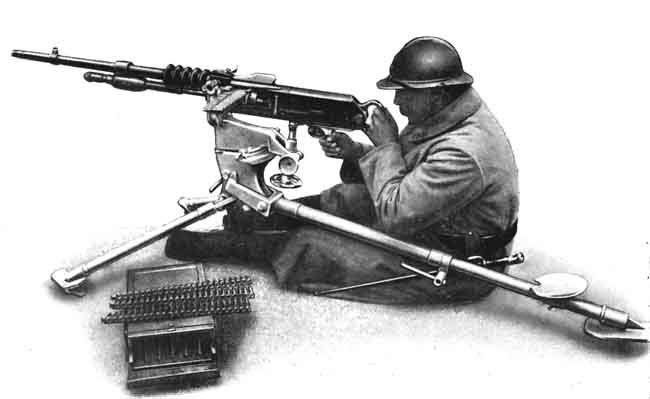 About "Hotchkise" remembered with the beginning of the First World War. In France, it was adopted under the designation Mle 1909, in the UK under the designation Mk I “Hotchkiss.” 303, and in the United States - “Bene-Mercier” .30 M1909 "). In 1916, the English put the production of machine guns in Enfield and Coventry (by order from France, about 670 units were produced per month). These machine guns supplied folding bipod, a ring on the trunk with trunnions under a light tripod, could be installed rear support. The Hotchkis machine gun was also delivered to Greece, Spain, Norway, and Brazil.

The Hotchkis machine gun retained the gas-discharging engine of automation (removal of powder gases through the transverse hole located below the barrel) and the long stroke of the gas piston having a spigot. The gas chamber regulator was an unscrewable piston located in front of the chamber and functioning according to the principle of volume change. Exhaust gases were dumped through holes in the gas cylinder. The recoil spring was positioned in the piston rod channel. The locking knot was changed - on the battle larva of the bolt and on the breech breech intermittent cutting was performed. The clutch of the breech breech and the combat larvae of the bolt were made with a rotary clutch with internal sectors, the barrel served as its axis of rotation, and the piston rod produced a turn. This somewhat cumbersome system provided strong locking and protection of the shooter during a breakthrough of powder gases through the chamber. On the muzzle of the trunk was attached clutch with a tide for bipods and front sight. The reloading handle was also the fuse interpreter. By turning the knob in the transverse plane, the mode was determined - a fuse (“S” mark, located on the rear wall of the receiver), a single fire (“R”), continuous fire (“A”). The movable automation system had a stroke length equal to 106 millimeters.

Power was supplied from a rigid tape on the 30 English or 24 French patron. The ribbon was propelled by a finger of a lever that is connected to a moving system. The mass of the ribbon was much less than that of the store, but it worked less reliably, and loading the machine gun was especially difficult at night. On the wooden butt there were a pistol protrusion and a narrow neck for coverage with the left hand, shoulder rest. In the butt there was a compartment for placing the oil can.

Russia acquired 540 Gochkis submachine guns in 1909; in general, delivery was completed in January 1917. Fabric tapes were sent to Russia for "Hotchkiss", but the work of the machine guns was so unreliable that they were remade under a rigid tape. The weapon did not show any special advantages besides the comparative simplicity of the device. They were mainly used in aviation. In June 1917, the UK adopted the Mkl * modification with a semi-rigid or rigid tape - this most successful modification of the manual "Hotchkiss" was mainly used as tank machine gun. Later, in this capacity, he came to Russia with British tanks.

“Hotchkiss” did not like any army as a light machine gun. His service was more or less long only in the colonies — for example, by the Indian army, it was used until the beginning of the 30s. During the Second World War in England, the old “Hotchkiss” had to arm the local defense forces (at that time they, in accordance with the new nomenclature, had the designation MkI * and No. XXUMX MkI). 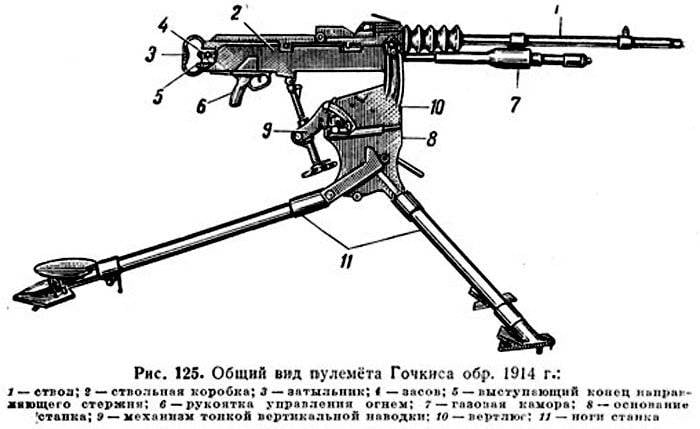 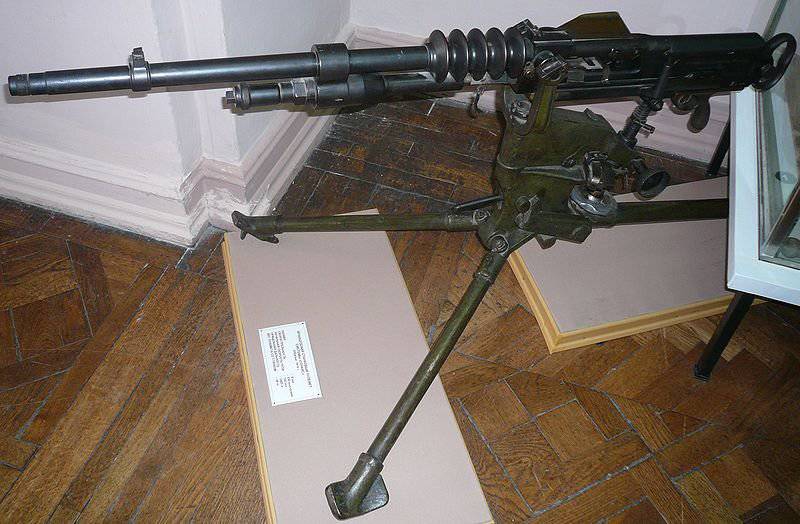