The most peaceful ship 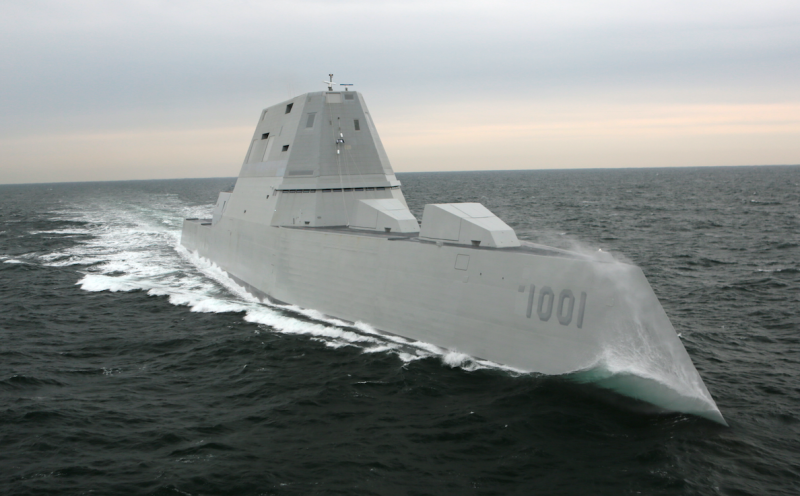 This ship is made of peace and love. Thank fate for the fact that we will never see the full functionality of the “Zamvolta”, as it was conceived by its creators.

With a dual-band radar, the three grilles of which looked up, the other three continuously scanned the horizon line.

With a full ammunition of missiles for any purpose, including long-range missiles and long-range kinetic inter-atmosphere interceptors.

With six-inch artillery systems capable of watering an endless rain of guided munitions at 100 + km. At gunpoint - the entire infrastructure of the densely populated coast, areas in which one third of the world's population lives.

With a closed loop near air defense, consisting of 57-mm automatic anti-aircraft guns with programmable projectiles.

With the full implementation of the plans of serial construction - 29 destroyers of the new generation on the guard of freedom. 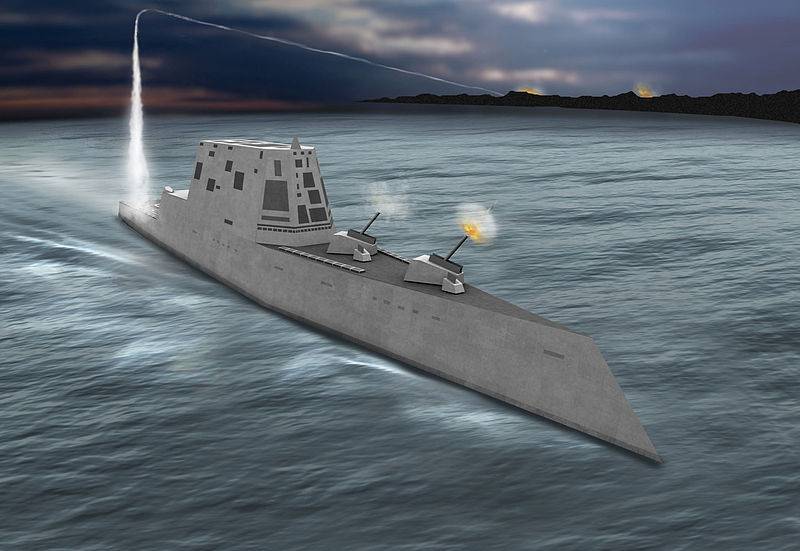 But enough to scoff at not the worst ship. What happened in practice from an ambitious rearmament program fleet?

It turned out, to put it mildly, rather weakly. The “Destroyer of the Future” no longer radiates its former confidence, and its sequestered functionality casts doubt on the very idea of ​​its construction. Despite all the difficulties, the project still attracts the attention of specialists and the public. For various reasons.

No matter what they said about a series of “experimental” ships, to test new technologies, “Zamvolt”, in the first place, remains a combat unit. With a potential exceeding the aggregate potential of fleets of many countries of the world.

80 rocket mines. Few modern ships have such power. You shouldn’t dismiss his large-caliber guns - an unexpected solution breaking the stereotypes of modern warfare (six-inch guns were not put on ships from the 1950-s).

Innovation "Zamvolta", at first glance, seem not obvious. The inhabitants see only the “iron” of an unusual form, without the promised railguns and other futurism. Specialists also do not express much enthusiasm - many elements of the “destroyer of the future” have long been used in practice.

It has long been observed that the silhouette with the collapse of the sides coincides in shape with the “Merrimak”. If the comparison with the battleship is just a curiosity, then other moments can no longer be explained by simple external similarity. One of the main features of Zamvolta, the electric transmission, was first installed on the Russian diesel-electric “Vandal” (1903). Then the scheme was applied on many military and civilian ships, incl. on Lexington-type aircraft carriers and battleships (Tennessee, Colorado). Nowadays, the British destroyers Daring use a similar electric transmission.

On the other hand, one should not underestimate technical progress. Turbogenerators and electric motors of battleships of the First World War could provide the power of the entire 28 ths. Hp A quarter of the possibilities of “Zamvolta”! With incomparable sizes and power density. 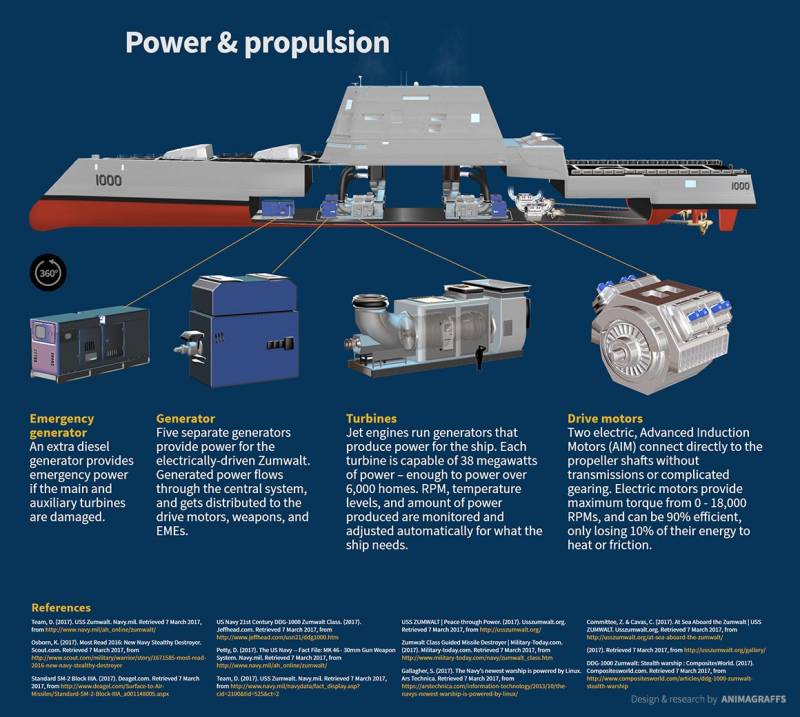 And not just a transmission. “Zamvolt” is a real bundle of electrical energy, penetrated by its threads from the keel to the dung. The main innovation in the field of power plant is the flexible management of energy flows. According to the creators, this allows for a few moments to redirect up to 80% of the generated power to a separate group of consumers.

As you might have guessed, this was done with respect to promising electromagnetic guns. Destroyers are unlikely to survive until the emergence of combat-ready "railguns," but the Yankees in the process of working on the "Zamvolt" gained practical experience in creating ship-based electrical systems and automation, operating with capacities of tens of megawatts.

As with any development in critical areas beyond the traditional concepts, such advances can change technology and technology at lower levels. And this is the whole DD-1000 project.

Many of the items presented in fragmented form met in the past. But only in the project “Zamvolt” they became part of a single structure.

For the first time such large-scale measures to reduce visibility were implemented on the ship of the “destroyer” class ship. Angular forms, radio-absorbing coatings, masking of thermal emissions of a power plant, a weakly pronounced wakefield ...

For the first time - complex automation, affecting many aspects that previously no one paid attention. Everything has been automated, including the loading of ammunition, food, spare parts and consumables in preparation for the march. Coupled with the increase in the turnaround time of all mechanisms and systems of the ship, which saved the crew from the need for repairs in the open sea. No workshops, teams of masters and electricians. All maintenance will be performed only in the database - before and after the end of the hike. The crew is reduced in 2-3 times compared with cruisers and destroyers of the previous generation.

For the first time, a multifunctional radar that combines the functions of a surveillance radar, a target illumination radar, a counter-battery radar and an electronic warfare station. Automatic detection of floating mines, targeting fired missiles, electronic intelligence - collecting information in a passive mode.

Fortunately, the radar has a limited detection range. Three other antenna arrays (AN / SPY-4) were never installed on the destroyer (empty area on the ill.) 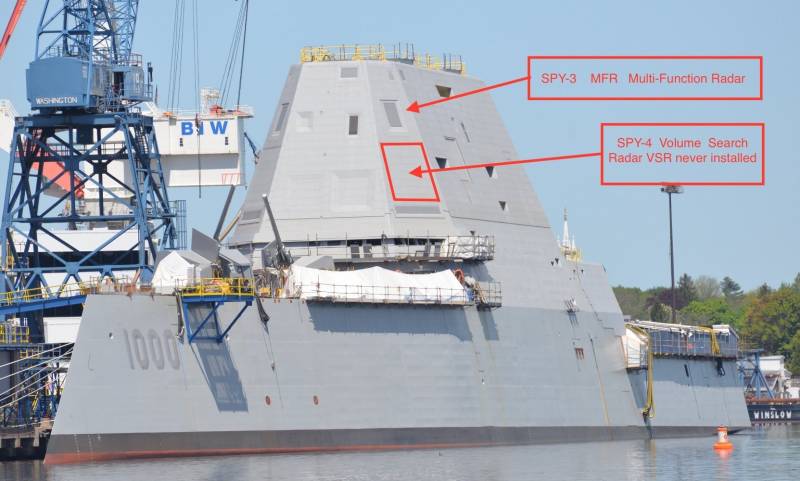 Mixed rocket gun armament. New launchers (Mk.57), equipped with expelling panels and dispersed around the perimeter of the ship - to localize damage in case of fire and detonation of ammunition in the launch shaft. The maximum launch mass of the missiles was doubled (to 4 tons) - the air defense system Mk.57 was created based on the needs of the near future.

"Soldiers climbed to the edge of the parapet, but did not find the enemy ..." In the absence of any equal rival in the coming decades, the US Navy curtailed the program to create the next generation of destroyers.

Due to the fact that the project was in a high stage of readiness, it was decided to build a limited series of three destroyers, i.e. by American standards they didn’t even start building. The next step was to reduce the functionality. If Zamvolts are not a substitute for the entire fleet of destroyers, you can opt out of a number of expensive systems. “The ships of the future” lost three arrays of the general survey radar, - the tasks of the zonal air defense / missile defense were assigned to dozens of other destroyers with the Aegis complex.

Then the question arose: what to do with the “white elephants”? As noted above, this is not just an experiment. “Zamvolty” - full combat units. Due to the lack of long-range radar, they did not fit into the classic AUG. On the other hand, low visibility, a combination of rocket-gun armament and serious defensive capabilities (multi-purpose radar with AFAR + highly maneuverable short-range and medium-range ESSM anti-aircraft missiles) made the Zamvolt suitable for single actions off the coast of the enemy. Fire support units of the army and the ILC, leading the battle in the coastal strip, unexpected rocket-cannon attacks on targets on the coast.

The 155-mm Advanced Gun Systems (AGS) ship guns were a real disaster. The Americans in an unthinkable way perverted the idea of ​​naval artillery. Although the idea itself was rational grain. Artillery has its own scopein which it is superior in efficiency to any other means. Of the advantages: complete immunity to weather conditions, means of air defense and electronic warfare, high density of fire - the fire of the WWII cruiser was comparable in density to the wing of a modern aircraft carrier, the highest response time, the negligible cost art. ammunition - the usual “blank” in 1000 times cheaper than a cruise missile. 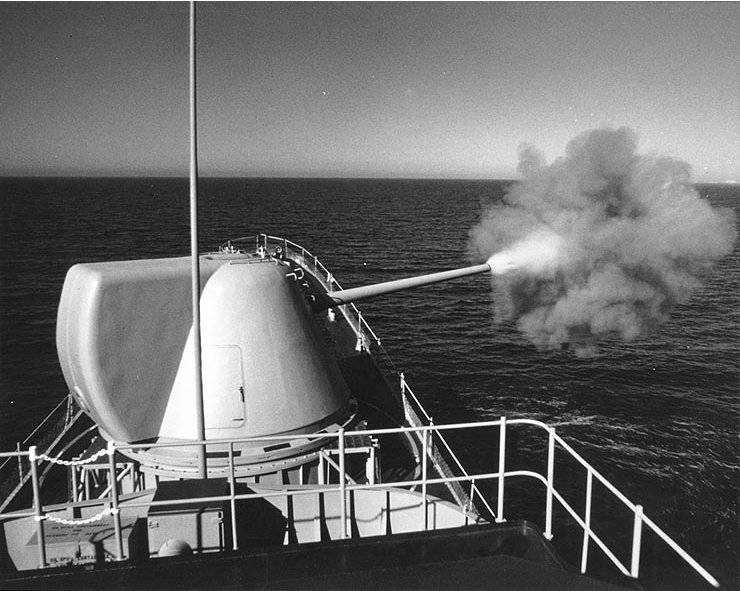 The automatic gun Mk.71 caliber 203 mm - the apotheosis of the development of naval artillery. Tests on the destroyer “Hull“ (1975 g.)

“Zamvolt” has nothing of the kind. Its magnificent guns are mothballed, until an acceptable ammunition that meets the requirements of practicality and economic justification for the application. The concept of AGS was initially erroneous: artillery does not need to compete with missiles, setting records in range and accuracy.

Currently, “Zamvolta” are trying on the role of “fighters” of enemy squadrons in naval combat. According to the calculations of admirals, a smaller visibility will allow them to secretly go to the distance of the start of the missile and the first strike.

Main anti-shipping weapons should become anti-aircraft missile RIM-174 ERAM (SM-6), capable of hitting beyond-the-horizon air and sea targets. According to official data, the launch range for the surface target can reach 268 miles. The relative weakness of the warhead (64 kg) is compensated for by the short reaction time and high speed of the 3,5М in a quasi-ballistic trajectory. The rocket was put into service in 2013 year. The military budget for the 2019 year laid the amount of 89,7 million dollars for the adaptation of “Zamvolt” under the SM-6 missiles.

The use of another promising development from the Zamvolt, the AGM-158C LRASM anti-ship missile with a multispectral seeker, new attack algorithms and a launch range over 300 miles, is out of the question. Tests AGM-158 are in the final stages, according to official data, its adoption is expected in 2018-2019.

The change of priorities only happens on paper. A modern destroyer-class warship with a displacement of> 10 thousand tons is versatile enough to fight any underwater, surface, air and ground enemy. 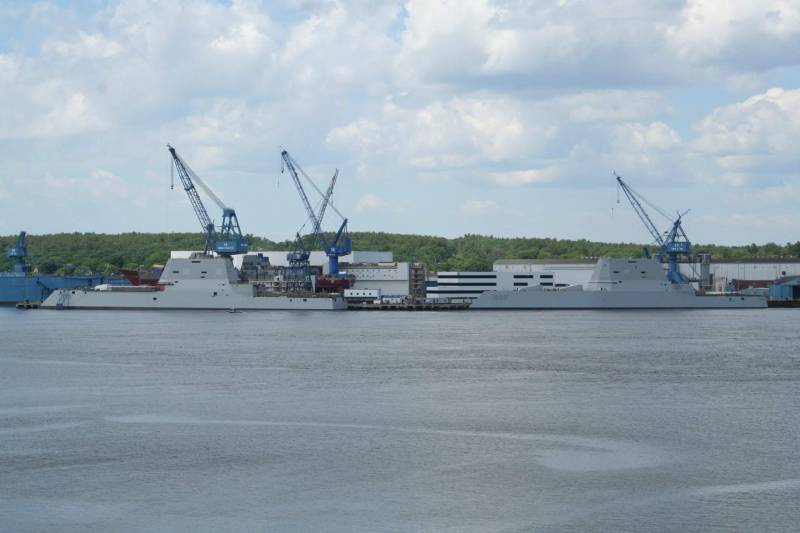 But the very fact of finding suitable tasks for built ships irrefutably indicates the miscalculations of their creators. The main mistake is the redundancy of the US Navy, operating a fleet of 90 cruisers and destroyers. Against this background, the Yankees, naturally, cannot understand why three more “non-standard” ships were built for this armada.

Imagine the situation: “A tomograph worth 500 million rubles was purchased for the hospital of the county town N. from the city budget.” History, for sure, it will end up with the fact that a young doctor will complain to journalists that this is not a tomograph at all, but just an X-ray machine. And he has been unpacked for a year in a room on the first floor. There will be a fuss, fighters against corruption will run in, and there is a considerable chance that shreds will fly from the responsible persons.

Unlike the civilian sector, which is somehow controlled by the public, the scope of military orders is an inexhaustible source for embezzlement and “kickbacks” on a particularly large scale. 10-fold overpricing under a deaf veil of secrecy.

“Zamvolt” is blamed for the fact that it is indecent roads (4,24 billion dollars). And, this supposedly stands out for the worse. Take a look at other modern ships - yes there are “zamvolty” at every turn.

The announced cost of modernization of the Admiral Nakhimov TAKRK - 50 billion rubles, or 1,6 billion dollars. As of 2013, you can be sure that by the end of the work, the cost estimate for long-term construction will increase several times. It is difficult for an ordinary person to imagine such values.

For comparison: the cost of the world's largest cruise ship “Symphony of the Seas” was 1,35 billion dollars (2018). Just do not say that the process of building an 16-deck giant is less complicated and time consuming than building another “zamvolta”. What are some unprecedented measures to ensure the safety of 6000 passengers! 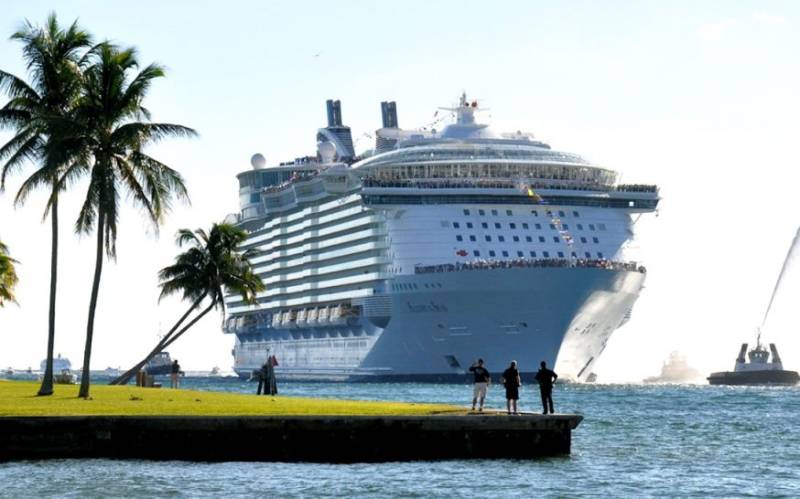 The total length of the 362 m. Displacement - like two nuclear aircraft carriers.

The only “adequate” item of expenditure in the implementation of military shipbuilding projects is scientific research. The total cost of R & D for the project DD-1000 was about 10 billion dollars, while the application of the results is not limited to one Zamvolt. For example, the dual-band radar complex Dual-Band Radar (DBR) is also installed on Ford-class aircraft carriers.

When creating the “destroyer of the future,” a vast reserve was obtained in the field of designing hulls of unusual shape, methods of reducing visibility, automation, creating combat information management systems, radar facilities and weapons of the new generation. 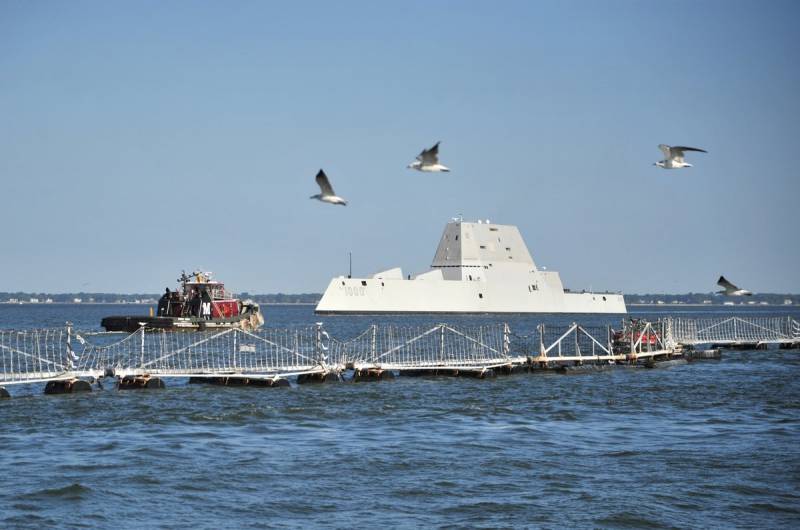