Who will lift our Crimea? 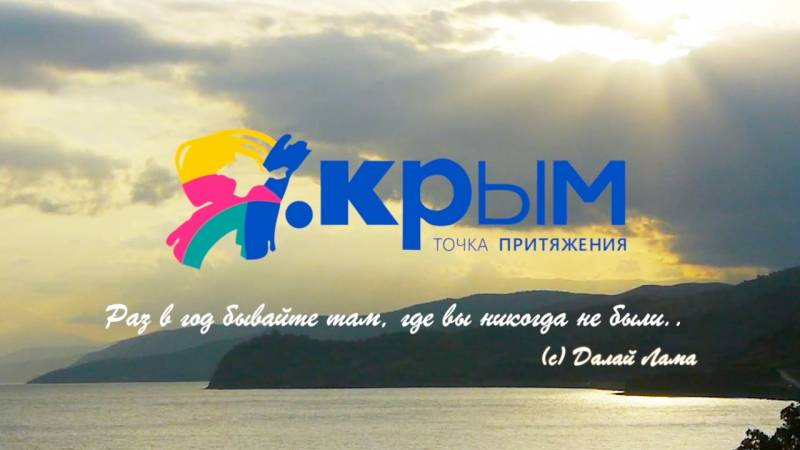 In the ministerial circles of the Crimea split. The Ministry of Resorts and Tourism was divided into two camps. And now two groups of officials drag the tourist rope, arranging the infamous "push-and-pull" instead of working to develop the hospitality industry. It looks especially funny in an important election year, secondly, and after the disastrous last year - firstly.

Meanwhile, the situation is not improving at all. The industry is swinging very slowly, and the tourism industry is looking at the industry and is also not in a hurry.

More recently, 20 February, opened a tourism forum "Open Crimea". If we wrote that February 20 opened the tourism exhibition "Open Crimea", we would not have lied: the Ministry of Tourism could not decide on the name of the event.

The website of the Ministry says about the forum.

And on the site of the tourist center of the Ministry of Resorts and Tourism, this is already called an exhibition.

Apparently, for one ministerial clan this is a whole forum, and for another - an ordinary exhibitor. We will not know this, but the feeling that something is wrong in the Ministry of Resorts and Tourism of Crimea is clear.

Then another oddity. It turns out that the forum-exhibition is not held in one place, as is usually the case in view of simplifying the logistics of exhibitors and participants (some of which are not from the Crimea).

The forum-exhibition is broken into two (again) parts: one site in Simferopol, the second in Yalta. The public, to put it mildly, is not thrilled with such “blurring”, but what to do: the clan war does not ask the public, especially when it is being redistributed.

The statement of the new Minister of Tourism of the Republic Vadim Volchenko, speaking before a half-empty conference hall in Simferopol, looked funny: "We organized such a large-scale tourist forum for the first time in the capital of Crimea, in a new international exhibition center, and this is a small revolution for the tourist industry."

This remark is like a black mark for the opposing clan, which did the exhibition in the old manner in Intourist’s moor Yalta, and the words about the “little revolution” as if should convey the idea of ​​seriousness to competitors.

Separately, it should be said about the “new international exhibition center”. The story about him needs to start as early as the 6 century, from stories Tauris

Long ago, in the Middle Ages, Byzantines began to master the mountainous regions of the Crimea. On high peaks, military architects cocked cave cities, turning the pagan temples of the Taurians into ruins. One of the most vivid examples of such cities is the site of ancient settlement Mangup, on which the principality of Theodoro was located in those years.

In one of the hundreds of caves in this city, you can easily see how the purpose of the voids carved in the stone changed over time. From the place where grain was stored, the cave turned into a stall for sheep and goats, then after a year it became a barn for storing household utensils, and after a while - a Christian temple.

Similarly, the premise in which the Connect Center exhibition center in Simferopol is located was a few years ago the building shop Nova Linia of ancient ukrov who dug out the sea. For us, for example, curiosity became the main motive for visiting the exhibition-forum: how can a shopping center on the outskirts of the bypass road be turned into an exhibition center? 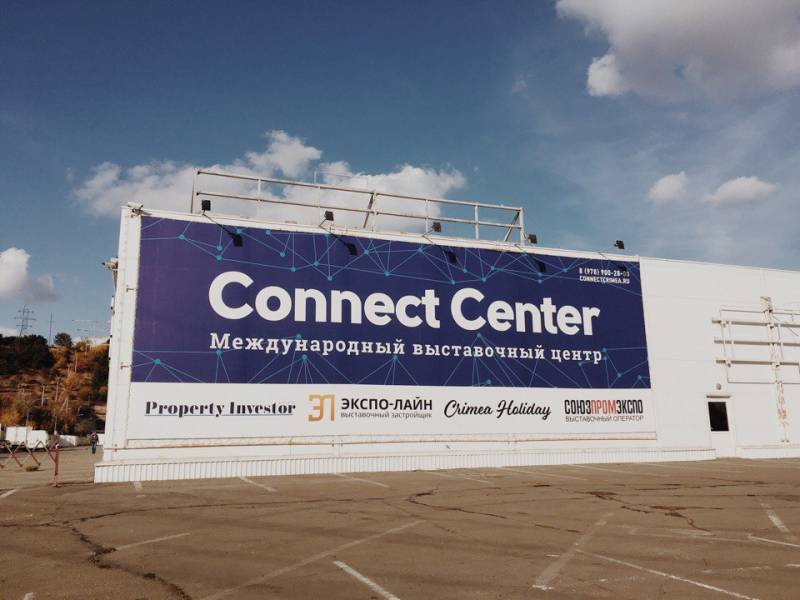 The transformation of the shopping center in the exhibition

This exhibition center unexpectedly appeared quite recently. And it was made by a team led by a Canadian Frenchman, whose name is Cedric William Bell. Eight years ago, he met Krymchanka Eugenia, married her and moved to Crimea. Cedric's team has been publishing the Crimea Holiday magazine for several years and organizing wine festivals. 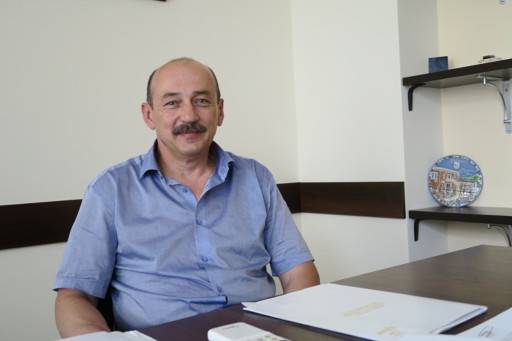 Ex-Minister of Resorts and Tourism of Kazakhstan S. Strelbitsky

During the time when Crimea was part of Russia as Minister of Tourism, three people have already visited. About the first, or rather, the first, Elena Yurchenko, is no longer interesting to talk about. The second, Sergey Strelbitsky, was remembered by the fact that instead of developing tourism on the peninsula, he created various associations of tour operators with paid membership, and the minister’s favorite occupation was pathetic speaking at tourist exhibitions of solemn speeches in the spirit of “We are pleased to inform you that this year Crimea visited 5 million man, it's 500 thousand more than the previous one! ”

Although they have always waited for the development strategy of the industry, but, unfortunately, they did not wait. I remember that we asked Strelbitsky to work together with tour operators bringing Chinese to the Crimea, normative documents regulating the behavior of guides in the republic, even proposed a bill. But they could not persuade them to take up this business. And to the free help in translating the materials of the ministry into Chinese, he generally responded with his charming smile and took up other issues. And the Chinese are very not weak interest in the Crimea, and in historical terms. And we are ready to go in droves and pay.

Needless to say, what is the crowd of Chinese who want to look at the historic dacha of the teacher of the great Mao? In quantitative terms? 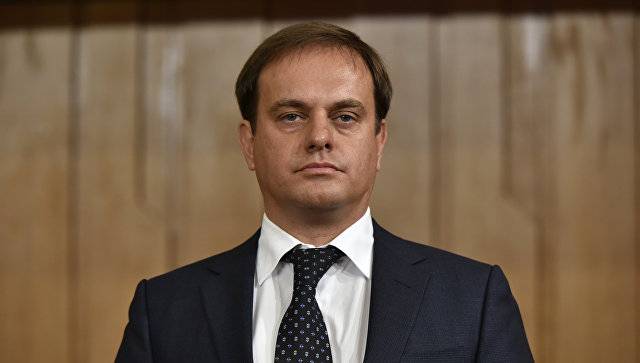 Acting Minister of Resorts and Tourism of the Republic of Kazakhstan V. Volchenko

The new minister, Vadim Volchenko, in his speech, addressed mainly to journalists, and not to the visitors of the forum-exhibition, spoke about his hopes for the best. And when he recently stated that in 2017, the Crimea was visited by 5 million, the audience was overwhelmed with a sense of deja vu, only a charming smile was missing.

We will not talk about holding an exhibition forum at the Intourist Hotel, since this is a common post-Soviet tradition that is not outstanding. We are interested in exactly the Simferopol component.

The exhibition and forum in the new exhibition center "Connect center" was organized at the level of student initiatives. There were three zones: the main stage at the entrance, the congress hall with speakers and directly the zone with exhibition stands. The person who first appeared in this building, it was very difficult to figure out where that. Navigation let down. We saw a lot of people rushing around the corridors of the former shopping center.

A separate item was the issuance of badges to participants. They were given out almost in the middle of the day, as there were difficulties with the designers and the organizers could not bring the handouts in time. 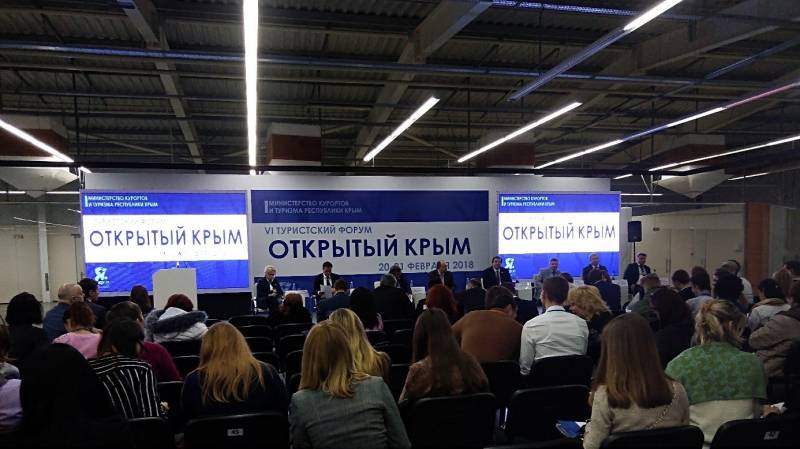 The start was also impressive. It seems that the first important event was the opening of the forum, but the people at the main stage were very few. We walked into the hall, where serious people sat in front of the half-filled chairs (minister, head of Rostourism, permanent representative of Crimea to the president), and very quietly and uninterestingly talked about idle things, including the prices for air travel to Crimea, which this year were just space.

It was surprising that the people occupying key positions in the locomotive of development of the peninsula did not have their eyes at all. They were more like tired of the routine activities of the nomenklatura officials of the district center. On the huge screens behind the backs of the speakers, throughout their “conversational performance” hung the frozen “Open Crimea” inscription, without being replaced by any slides of a beautiful future, or even views of the Black Sea. Everything was very formal. 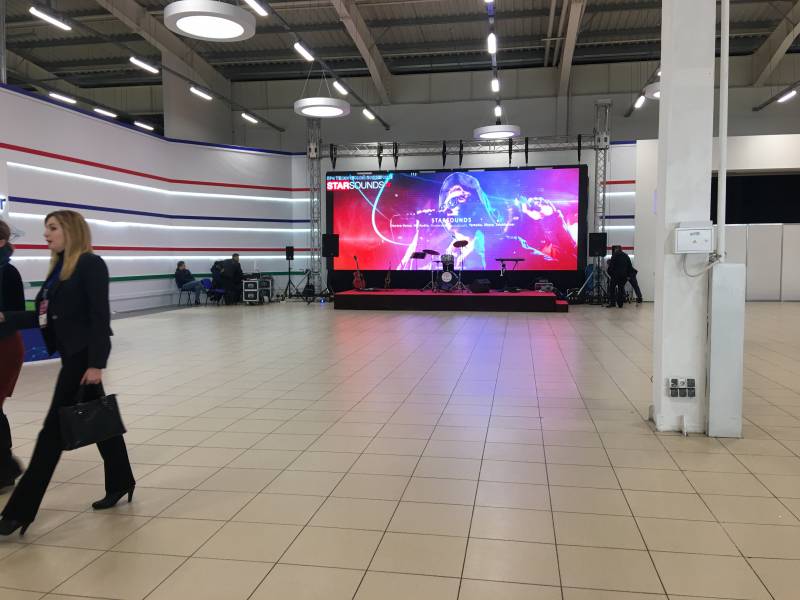 Main stage and absence of spectators

"Fun" was at the main stage. There were presentations of innovative projects that have already begun to change the tourism industry of the Crimea. Young guys from Siberia and Chernozem region told about the site with artificial intelligence, which selects the Crimean offers for tourists as accurately as possible, allowing you to plan your trip “from time to time” in terms of time and money.

The performances at the stage were much more alive than the monotonous speech of distinguished speakers in the congress hall. But it struck us that this main stage did not have a single viewer! The organizers could not properly distribute the flow of visitors. Almost no one came to the speakers, because it was far away, and no one lingered at the stage, perceiving it as a secondary platform.

On the same stage, the project of the information portal about Crimea in 4 languages ​​was presented. Led the presentation of St. Petersburg in Russian, Italian, French and English. The development of the news portal, breaking through the international information blockade of the Crimea, according to logic, should have been discussed with the ministers as the main strategists of the industry. But the presentation was held in the void, in the lobby with rare spectators.

Given that participation in the exhibition was paid, the speakers were humiliated in full - both materially and morally. As a result, money for participating in the forum was wasted, and interesting presentations were made in the humiliating atmosphere of the absence of spectators, with the success provided by the organizers - the Crimean Ministry of Tourism. I wonder if the speakers in Rospotrebnadzor will serve for the service, which is not fully provided? 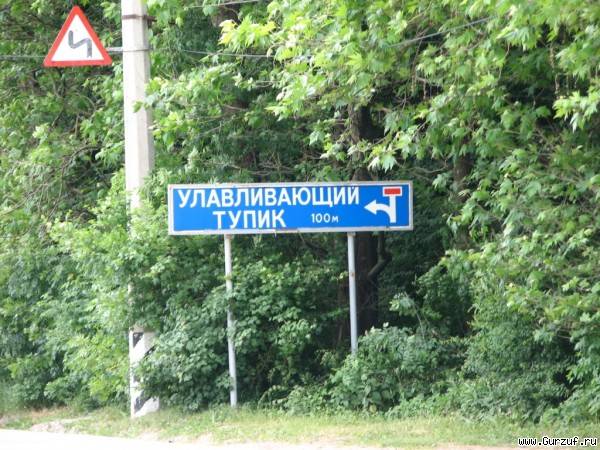 It is interesting whether the leadership of the peninsula understands that while they will openly “merge” the most important forums and exhibitions devoted to the republic’s main potential, tourism, the Crimea will remain a “catching dead end” - a place where state employees go for a vacation on holiday tickets, grandmothers, not carrying air travel, and poor students who do not have enough money for Turkey or Egypt?

Although, I'm sorry, enough. This we overdo it slightly. Alas, but the fact that at a cost the Crimea is again ahead of the rest of the world and only urgent barriers against Turkey, Egypt and Thailand can save the 2018 season.

And we are all calm. All the same.

And whose Crimea is in terms of forgetting about the prices of air carriers, for example, and banks in particular?

The naked eye can see how much power ministerial officials are spending on the internal power struggle, totally ignoring their responsibilities, bringing strategic events to commonplaceness.

Statistics tourist flow to the Crimea is not an indicator of the success of the Ministry of Tourism. And it should be voiced by extras, secretaries, deputies, but not the minister. The minister must issue a strategy that will lead 10, 20 million tourists to the peninsula. The minister should draw incredible prospects, images of the Crimea of ​​the future, in which the beaches are perfect, the staff is talented, the prices are democratic ...

The Minister of Tourism of the Crimea should not attribute the services of the Kerch Bridge and the Taurida Route to the merits of his department: all these megaprojects were created by a large Russia. And republican managers should, using this chance, build a garden city on the peninsula. Not less!

I would like to appeal to the Ministry of Resorts and Tourism of the Republic of Crimea. If you are deaf to small business, which is the core of the development of territories in successful cities of Russia, then at least listen to the presidential decrees, which have already set the only right direction. Why take up something that you dislike? In general, as the People would say, development or death!

And the beaches this year will show how we were wrong ...