Slutsk uprising and Poland - is there a connection?

April 24 2012
7
The Slutsk uprising is perhaps the most controversial issue in the formation of the Soviet state. There are diametrically opposed historical assessments of the events of 1920 in the territory of Belarus. In the thirties, now known as the years of repression and reprisals, almost all the participants of the national liberation movement of Belarus were convicted and executed. It remains to judge what happened only by the facts and evidence from the execution of cases that have been preserved in the people's memory. Among the diversity of opinions, there are three main points of view on the Slutsk uprising. 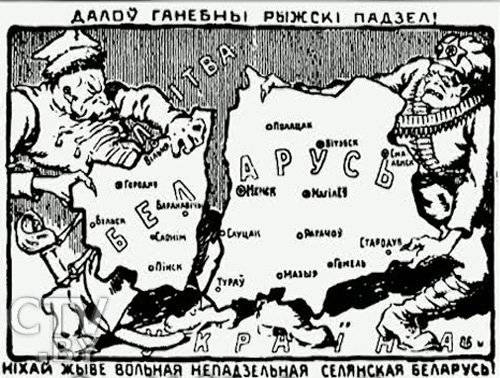 The Soviet interpretation of events boils down to the fact that after the Russo-Polish war in the territory of the BSSR, the work of a wide variety of agitators intensified. The purpose of their work was to initiate a rebellion with the help of criminal structures, as well as the use of anti-Soviet sentiments in the interests of the gentry. The speeches were financed by the Polish secret services, also a dependent organization, calling itself the Government of the Belarusian Democratic Republic, located in Warsaw. Today, this statement is questioned, but during the investigation period it was taken almost as an axiom. The Polish side focused on its own non-interference in the development of the uprising, as well as the allegedly voluntary withdrawal of troops from the occupied territories in accordance with the Riga Peace Treaty. However, we are most interested in the version of the Belarusians themselves. It was almost impossible to hear her for a long time, but after the fall of the USSR, the historical truth turned out to be covered by researchers from a completely new side.

October 12 heavy 1920, the two warring parties finally signed a peace treaty in Riga. In accordance with its terms, Belarus was split into two parts. One of them became the BSSR, and the other became part of Poland. Representatives of the two powers did not even think about the freedom and independence of the Belarusians. The behavior of both parties to the treaty is completely understandable, most of Belarus is covered with fertile lands on which hereditary agricultural producers live. In the Soviet period, the BSSR was called the ally of the breadbasket, there is grown a significant part of grain and vegetable crops. Providing independence to the edge meant depriving oneself of the use of resources. In addition, each of the parties understood that if even a small territory was left outside its influence, the other immediately occupied it.

However, the population of the country, tormented by mutual robbery and atrocities of fierce armies, did not have special sympathy for either the Polish interventionists or the Soviet dictatorship. During the war years, the Bolsheviks recruited all males capable of fighting into the Red Army. Representatives of the Soviets were not interested in the arguments of the peasants about the need to work on the land and feed their families. Tired of bloodshed, the peasants did not want to act in the struggle for people's power that was incomprehensible to them, but they also did not want to see Catholics eager for power in their land. To be more precise, the peasants did not want state sovereignty as such, but tranquility and peace, which, as it seemed to them, could only be achieved through the formation of an independent and free Belarus.

The High Contracting Parties in Riga determined that the line dividing Belarus ran in such a way that Slutsk district, which later became the spiritual center of the uprising, was to become part of Soviet Belorussia. Simultaneously with the division in the country, the national movement rose. Rather, the idea of ​​national independence originated during the Polish-Soviet confrontation, but turned into open speeches only after the end of hostilities. Already in the fall, anti-Soviet and anti-Polish “explosions” began in Minsk and Borisov counties. At non-party meetings, decisions were made on the creation of armed detachments, and their liberation goals were proclaimed.

The center of the movement became the city of Slutsk. The instigators of the uprising themselves sought both financial, and political and military support, but the proposal of the representatives of Poland to move under their sovereignty and protection suited not many. It should be recognized that there is still some truth in the accusations of the leaders of the uprising in cooperation with the Poles. The government of the Belarusian People’s Republic skillfully used the rise of the national spirit of the peasants. The rebels were sent assurances of assistance, as well as items of state symbols: a red-white flag and coat of arms. In fact, as such, the republic no longer existed, but the presence of any manifestation of state power was simply necessary for the movement. The presence of the government in Warsaw gave grounds for the Bolsheviks to declare that the uprising was not national, and the decisions taken by the committees could not be considered popular. The Red Army detachments came out against the rebels.

The anti-Soviet sentiments among wealthy peasants and merchants, which were much larger in this region than in the central part of Russia, also contributed to the spread of national sovereignty ideas. The concentration of the kulaks, runaway Red Army men and wealthy citizens, including the owners of manufactories who seriously feared ruin and reprisals after the final approval of the power of the proletariat, created fertile ground for the development of the movement. People remembered the practice of surplus very well and understood that the new visits of the food withdrawal detachments could be resumed.

The leaders of the liberation movement were not united in their views on the future of the country. Some tended to cooperate with Poland and one of the military commanders Bulak-Balakhovich. Others pointed to the expediency of negotiations with the Bolsheviks, and still others held utopian opinions about the possibility of creating an absolutely independent state opposing both Poland and the Soviets. Contradictions manifested themselves during the whole uprising and, as a result, became the main cause of the defeat of the rebels.

Polish agitators were active in Slutsk district, persuading the population to declare their desire to go under the sovereignty of Poland. The most persistent were arrested and betrayed by the Soviet authorities. Despite the displeasure of ordinary Belarusians with the Bolsheviks, they feared the Poles no less; therefore, they perceived various kinds of agitation, as a rule, with hostility.

It should be said about such a leader of the movement as Vladimir Prokulevich, who was most tried to be accused of having links with Poland. By political conviction, this man was a Social Revolutionary, had a higher legal education. Very little is known about the individual, only in 1995, the year Vladimir Mikhnyuk was allowed to study a multivolume criminal case about the Union for the Liberation of Belarus. Documents relating to the accused Prokulevich was not very much. According to the researcher, all documents drawn up in advance and for a specific purpose were signed by the accused. However, we are not interested in a trumped-up accusation, but the few biographical data that were recorded in it.

Born Vladimir Mikhailovich 2 December 1887 year in the Minsk province in the family Zemsky secretary. Until 1910, he adhered to the views of the Mensheviks, and then joined the Socialist Revolutionaries. Before the 1917 revolution, and some time after it, Prokulevich worked as a judge. In accordance with the materials of the case, from 1920 up until 1923, he participated in the counter-revolutionary Slutsk uprising, and then hid from court in exile. After a quick investigation, Prokulevich was sent to Perm for five years, however, in the 1938 year, he was still shot.

Prokulevich was the head of the elected rebels Rada. His responsibilities included making decisions together with another seventeen members in the field of defense and the organization of the regional administration. Parliament immediately after its election in November 1920, announced a general mobilization. Until today it has not been established exactly what was the participation of Poland in the activities of the rebel government. Some argue that all the financing of the uprising was carried out by the Poles, others, including the authoritative research historian Stuzhinskaya, insist that support from Warsaw was more in words. Modern authors consider the main source of funding for the rebels of well-off Belarusians, who have donated almost all of their wealth to the needs of the liberation detachments.

The command of the rebel forces was entrusted to Captain Peter Chaika, who was later arrested by his fellow soldiers on suspicion of treason. The liberation national militia consisted of only two regiments, headed by Gavrilovich and Antsipovich. Despite the support of the population, the troops were weak and disorganized, and the weapons were sorely lacking. Nevertheless, at first luck turned out to be on the side of the rebels. In many ways, their successes were associated with the sympathy of the Red Army soldiers for the rebels, as well as the ill-conceived actions of the Soviet command.

The Bolsheviks soon found a solution and directed against the Belarusians detachments of Chinese and Tatars (international formations) who did not experience fraternal feelings towards the enemy. The forces were unequal, but the main reason for the defeat was the conflicts in the leadership. The fact is that the military command was of the opinion that it was necessary to seek support from Bulak-Balakhovich, while the majority of members of the Elected Rada refused such a decision. Contradictions soon reached their apogee and culminated in a series of arrests and reprisals. And without that little organized units, were deprived of professional leadership, ammunition ended, the first casualties appeared. In addition to all the outbreak of typhus. On December 28, on the Moroch River, the remaining soldiers were declared to cease hostilities and conclude a peace agreement with the Soviets. Some of the rebels continued to fight with the Soviet government under the command of Makhno, the other part returned to their places of origin. Virtually every participant in the uprising, especially the leaders, were tried, and executed at the end of the 30s.

Today, the Slutsk uprising is viewed in Belarus as the first manifestation of the struggle for an independent state. The leaders of the liberation movement and its rank and file participants are considered heroes, and they prefer not to recall the role of Poland in this historic event. In this case, the modern "democrats" are actively using the opportunity to once again stigmatize Soviet power with shame and catch the Bolsheviks in an effort to seize territory by force. However, too much confuses them in their reasoning. The main circumstance remains covered with mystery, namely the role in the uprising of the gentry.