March 2 2018
13
The main contract of February was the signing of an agreement with Indonesia for the supply of 11 Russian Su-35 multi-role fighter jets. The cost of this transaction is estimated at 1,14 billion dollars, of which 570 million dollars will be covered by the supply of Indonesian commodities. Also in February, Rosoboronexport reported on arms shipments to Indonesia for the period from 1992 to 2018.

Russia and Indonesia have signed a contract for the supply of 11 ++ Su-4 multi-generation fighter jets, the Russian news agency reported on Thursday, 35 February, citing own sources in JakartaInterfax". The signing of this contract by 16 in February was confirmed by Totok Sugiharto, head of the public relations center of the Indonesian Ministry of Defense.

The contract value is 1,14 billion dollars, part of which is covered by counter deliveries of Indonesian goods, but this part of the contract by Indonesian sources is not detailed. Earlier in the Russian media appeared information that we are talking about exactly half of the amount claimed - 570 million dollars, which are going to cover the supply of Indonesian commodities. It is worth noting that these products are not likely to be physically delivered to our country, and then will be sold on the stock exchange.

That the supply of modern Russian aviation According to the laws of Indonesia, technology is tied to offset obligations and countertrade, said Viktor Kladov, who holds the post of director of international cooperation and regional policy at Rostec State Corporation, earlier. According to him, this means that Russia has committed itself to purchase a number of national Indonesian goods. Kladov noted that Indonesia could supply Russia with rubber, palm oil and other products of its traditional export. 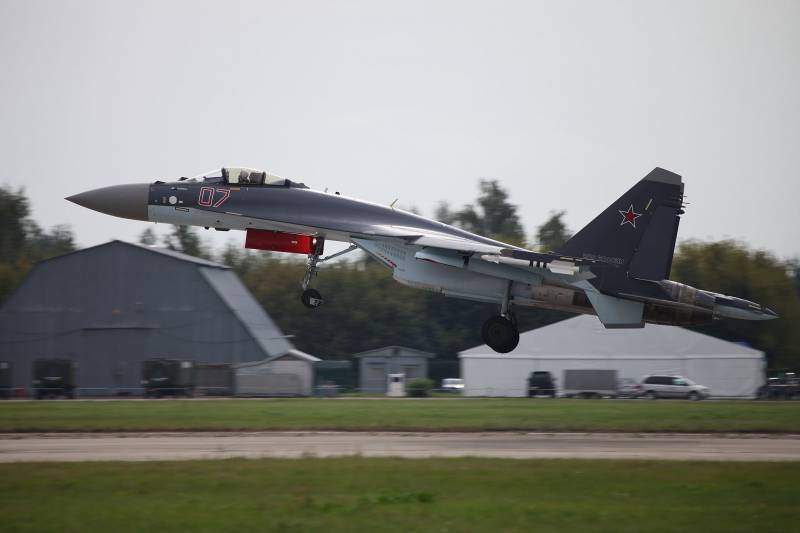 As noted by the Indonesian newspaper "Kompas“, The agreement between the countries allegedly provides for the transfer of Indonesia’s technology to repair Su-35 fighters in order to no longer need to send them to Russia for repairs. Totki Sugiharto told reporters that the signed contract should take effect in August 2018 of the year, and the first two Su-35 fighters will arrive in Indonesia in August 2019. The following 6 aircraft must be delivered by February 2020 of the year, and the last 3 multi-functional fighter will be transferred to Indonesia in July 2020.

Indonesia acquires Russian fighter jets to replace their own fleet of obsolete American fighter jets Northrop F-5E / F Tiger II, which are in service with the 14 squadron of the Indonesian Air Force, based on Iswahyudi air base (Madiun, Java). For this squadron today nominally listed 8 fighter F-5E and 3 fighter F-5F. But in reality, according to the words of the Indonesian Air Force Press Officer Jamie Trisonjaya, quoted by the journalists of the Kompas newspaper, this squadron has not actually included a single aircraft for two years, since the Northrop F-5E / F Tiger II fighters had previously declared unsuitable for flight operations.

Thus, Indonesia became the second foreign buyer of the modern Russian multi-purpose fighter Su-35 after the PRC. Earlier in November, 2015 of the year Beijing acquired the 24 of the Su-35 aircraft (deliveries of fighters to China began in December of the 2016 of the year, and by the beginning of the 2018 of the year 14 aircraft were delivered). Serial production of multipurpose Su-35 fighters is conducted by the Komsomolsk-on-Amur Aviation Plant named after Yu. A. Gagarin (a branch of PJSC "Company" Sukhoi ").

Rosoboronexport noted the high level of military-technical cooperation between Russia and Indonesia. In the period from 1992 to 2018, the Russian Federation supplied military equipment worth more than 2,5 billions to the republic. Reports about it official site Rostec with reference to Rosoboronexport General Director Alexander Mikheev.

In 2018, military-technical cooperation between the countries turned exactly 60 years. Negotiations on the supply of Soviet weapons and military equipment to Indonesia began in 1957. In those years, the armed forces of Indonesia needed to carry out a total modernization, it was necessary to protect the sovereignty and territorial integrity of the country. The GAZ-69 SUV was the first to be exported to Indonesia, which in 1957 was able to win the tender from its Western competitors. In 1958, the first 100 vehicles were supplied for the needs of the Indonesian Air Force, and later, 400 off-road vehicles for land units. These cars are still 1958 year of manufacture used by the Indonesian armed forces to this day. 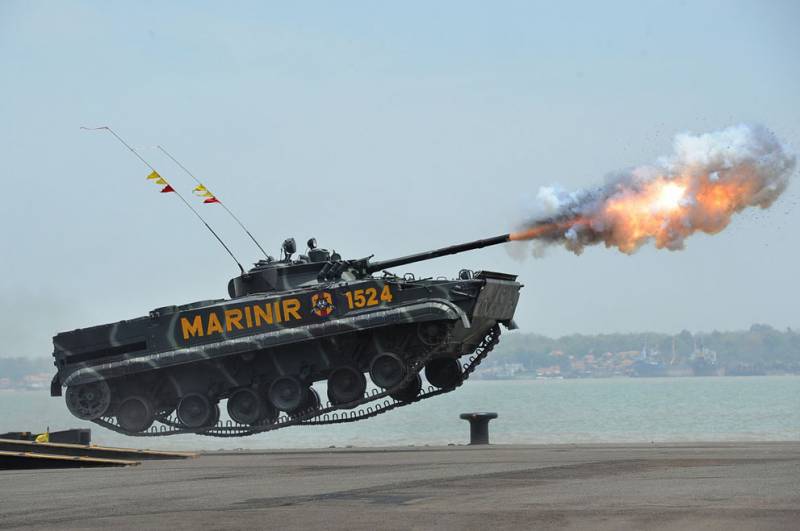 BMP-3F Marine Corps Indonesia
In 1958, the USSR and Indonesia agreed to supply dozens of MiG-15UTI training fighters to the republic, as well as MiG-17 fighters, Il-28 bomber aircraft and IL-14 transport aircraft. In addition, the Indonesian Navy was re-equipped with Soviet participation. In 1959, 4 destroyers were delivered to the country, which received the Indonesian names Sanjaya, Sultan Iskandar Muda, Savungaling and Silivangi and two submarines of the 631 project.

Later, after the collapse of the USSR, Russia continued its military-technical cooperation with Indonesia. “In general, since November 1992, the total volume of deliveries of military products from Russia to Indonesia amounted to more than 2,5 billions of US dollars. During this time, the Indonesian armed forces delivered Russian infantry fighting vehicles BMP-3F, armored personnel carriers BTR-80A, Kalashnikov assault rifles of the "hundredth" series, Su-27SK and Su-27КМ, Su-30МК and Su-30МК multipurpose fighters -106-MKF “2 and Mi-17, as well as other types of weapons and military equipment,” added Alexander Mikheev. In addition, Rosoboronexport has been a participant in the International Exhibition of Arms and Military Equipment INDO DEFENSE, which is held in Jakarta, for a long time. In November 35, Rosoboronexport will once again speak at this exhibition as the organizer of a single Russian exposition.

Iraq got the first Tanks T-90S and, possibly, BMP-3

The first photographs of the Russian main battle tanks T-90S delivered to Iraq, which arrived in the country 15 February 2018 of the year onboard the maritime transport from Ust-Luga port (Leningrad region), began to appear on Iraqi Internet resources. The images posted on the network capture the process of transporting tanks on trailers to one of the facilities of the Iraqi army in Baghdad, a blog reports bmpd.

Earlier, a deal between Russia and Iraq on the supply of main battle tanks became known from the published annual report of Uralvagonzavod Research and Production Corporation JSC for 2016 in which the beginning of the implementation of a contract with a foreign customer 2017 was among the priorities for 368. (Iraq) for the supply of the first batch of T-90C / SK tanks in the number of 73 units. In November last year, the TASS agency, citing a statement from the press service of the Federal Service for Military-Technical Cooperation (FSMTC) of Russia, stated that the Russian Federation is implementing a contract for the supply of T-90C tanks to Iraq and that “this contract is being implemented in accordance with approved by the parties schedule. " 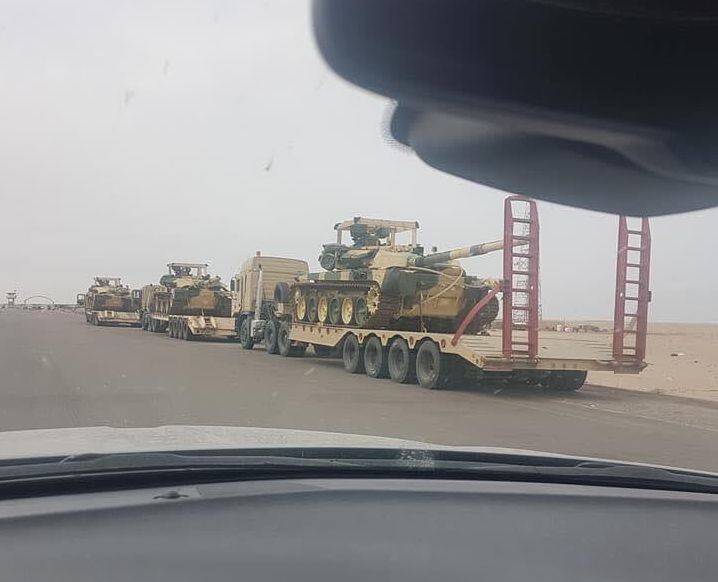 Also in February, it was reported that, in addition to tanks, Iraq began to receive Russian infantry fighting vehicles, the BMP-3. According to the Algerian Internet resource MenaDefense in the BMP 3 for Iraqi army, the Iraqi army received a batch of approximately 10 Russian infantry fighting vehicles BMP-3, which came in a package with the delivery of the main battle tanks T-90С / СК. Later, one of the Iraqi sources reported that the first batch of BMP-3 that arrived in Iraq was 19 combat vehicles.

Sources of the Algerian online edition confirmed that new shipments will be made to Iraq for the first batch of BMP-3 to Iraq. In 2015, Russia and Iraq signed a contract for the supply of about 500 BMP-3. The same resource writes that in 2015, Saudi Arabia ordered 900 of such combat vehicles, but the contract has not yet been finalized. According to the MenaDefense publication, the operating experience of the BMP-3 infantry combat vehicles in the UAE led to the development of a modification of the Dragoon with the front engine and ramp at the rear of the combat vehicle.

In the context of the inevitable reduction of the state defense order, enterprises of the Russian defense industry need to increase the volume of supplies of civilian and dual-use products, including to international markets. In this vein, the modern Russian light twin-engined multi-purpose helicopter "Ansat" has good prospects, including in the Chinese market.

Holding "Russian Helicopters», Which is part of the state corporation" Rostec ", together with the representatives of the Federal Air Navigation Agency held the first stage of negotiations with representatives of the Civil Aviation Administration of China (CAAC). The subject of the talks is certification in the Celestial Empire of the Russian Ansat helicopter. Following the results of the meeting, the parties elaborated the order of further actions. In the very near future, the delegation of the CAAC is going to visit the KVZ - Kazan Helicopter Plant to get acquainted with the production of new Russian helicopters, the official website of the holding reports. In addition to China, the Russian Helicopters holding is currently negotiating certification of this type of helicopter in Mexico, Brazil and Canada. 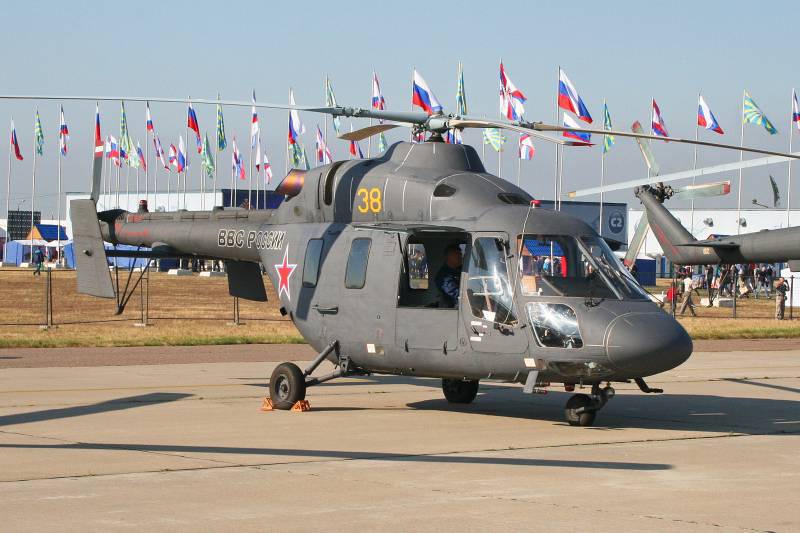 Ansat is a light multi-purpose twin-engine helicopter, its mass production has been established at the Kazan Helicopter Plant. The model of the helicopter with a medical module was certified in May 2015 year. It is reported that this model meets all international standards of air ambulance, providing the possibility of saving human life during transportation of the victims. According to the certificate, the design of a multi-purpose helicopter allows you to quickly transform it into a passenger and cargo version with the ability to transport to 7 people. In the holding "Helicopters of Russia" note that the medical "Ansat" has a number of serious competitive advantages over foreign counterparts in its class. In the first place - it is a lower cost of maintenance, repair and training. In addition, the Russian helicopter has the most capacious cabin in its class and can develop a high speed of flight, which makes it possible to use the helicopter when flying over fairly long distances.

Ctrl Enter
Noticed oshЫbku Highlight text and press. Ctrl + Enter
We are
Russian arms exports. August 2017 of the yearThe global crisis and the “yellow threat” led to the arms race of the countries of the Asia-Pacific Region. Part of 2
Military Reviewin Yandex News
Military Reviewin Google News
13 comments
Information
Dear reader, to leave comments on the publication, you must sign in.