While Russia expresses "concern", China is seizing the Middle East

March 1 2018
56
Beijing is playing an active game in the Middle East, turning there from a “strategic partner” of Russia into a dangerous rival. It is dangerous for the United States. The concept of “One belt, one path” serves for the Middle Kingdom as a bridge across the entire planet. The Middle East is important to China in that it is a “transit” route. 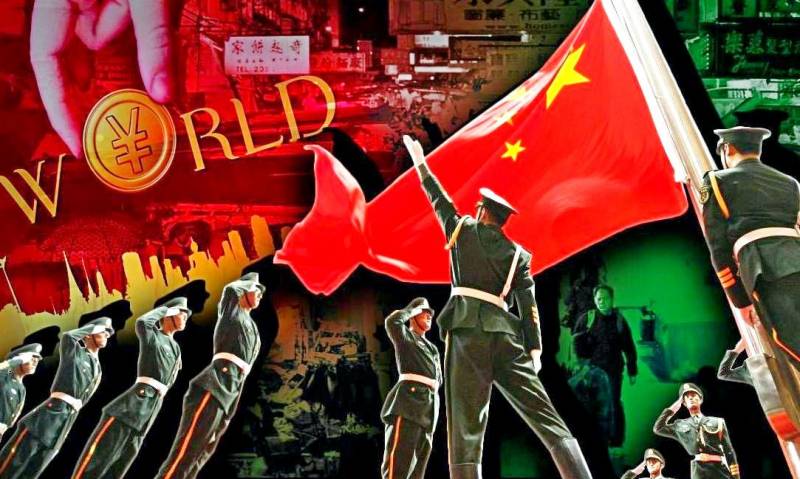 The “One Belt, One Road” initiative originates from the Xi Jinping policy statement made in the fall of 2013. At that time, the PRC Chairman spoke, however, about a smaller project - about the “Economic Belt of the Silk Road”.

The “economic belt of the Silk Road” was intended, according to the Chinese leader, to solve several main tasks: to strengthen regional economic integration, create a single “trans-Asian” transport infrastructure, eliminate investment and trade barriers, increase the role of national currencies in trade and deepen cooperation in the humanitarian sphere . The project implementation period is thirty years.

30 yo? For China, with his thinking for centuries to come, this is utter nonsense. In 2013, the Chinese leadership had no doubt that the project would cover approximately seven dozen states of the planet.

Later, the Chinese announced the second project - “Sea Silk Road of the 21st Century”. In essence, this was only a “water” addition to the land project.

And then the two paths formally united into one: “One belt, one path.” This global initiative is now considered a project to create a global transport and investment infrastructure. And above it will be China.

The first years of the successful development of this global project inspired the Chinese Communist Party so much that it decided to put Xi Jinping to leadership for almost a lifetime. This is not a joke: the Central Committee of the Chinese Communist Party proposed repeal one of the provisions of the constitution. Namely, the one that establishes that the chairman of the PRC can hold a leading position for no more than two terms in a row. It is possible that the Chinese comrades want the initiator of the path to be at the helm for another ten years, or even longer.

The most difficult in the Chinese global "belt" is the so-called central corridor. It is understandable: there is a tense political situation there, there are conflicting states, and the necessary infrastructure is not or not enough.

The Chinese government intends to link Eastern China (Shanghai and Lianyungang) with a “belt” with the states of Central Asia (Kyrgyzstan, Uzbekistan and Turkmenistan), and then with Iran and Turkey. Next, the route is drawn through the Balkan Peninsula to the French ports. To stretch such a “belt”, the Chinese will have to build an additional tunnel under the Bosphorus.

The Middle East belt of the Chinese "belt" covers the MENA countries (Middle East & North Africa, the same thing that in Russia is collectively called the Middle East and North Africa). It was this geographic region that unites the countries of the Middle East and the Maghreb countries that was set on fire in 2010-2011. "Arab spring". This includes Algeria, Bahrain, Egypt, Jordan, Iran, Iraq, Qatar, Kuwait, Lebanon, Libya, UAE, Oman, Saudi Arabia, Syria, Tunisia, Yemen and other states.

China’s fantastic project, which has long gone beyond what Xi Jinping announced in 2013, is striking in scope even in this particular area.

The Middle East "sleeve" of the Chinese initiative involves the construction of a number of industrial bases in the MENA countries, railway lines and the expansion of ports. If in 2010 the trade turnover of the People's Republic of China with the Arab states was 145 billion dollars, by 2014 it jumped to 250 billion dollars. Today, China has become the largest exporter of goods to the countries listed above. MENA countries are a source of raw materials for China: they now account for up to 40 percent of the oil supplied to the Chinese. As we see, the Chinese imitate the Europeans and actively diversify energy supplies. In addition, the Chinese, as part of their project, have conceived to build an expensive infrastructure for transporting liquefied natural gas (LNG). The price of infrastructure projects "One Belt" in the next fifteen years will amount to 26 trillion. dollars, notes analyst P. Escobar in Asia Times.

American observers believe that the Chinese "belt" already "really works" today. The One Belt, One Road Initiative is doomed to success, says Wade Shepard, author of Forbes magazine. True, “it is necessary to remember that the economic principles of“ One belt, one path ”will play their role not today, but through 10, 20 or 50 years,” the analyst said "InoSMI". That is, it is clear that China "is investing in the world of the future, where all roads will run through Beijing."

However, the Americans fear Chinese expansion today. The AidData study indicates: a financial giant has appeared in the world that has challenged the largest donor countries. 2000 to 2014 The PRC has provided funding to the world for 354,4 billion dollars. This is close to the volume that the United States allocated over the same period (394,6 billion dollars). And this is a very serious competitor: instead of choosing tops or roots, China takes away both, doing without confrontation. China emphasizes that it intends to "form partnerships through dialogue, where there is no place for confrontation, and where friendship exists instead of alliances." This is the message of Xi Jinping, the "main Chinese narrator", an American analyst is ironic. As a result, China is developing relations with Israel and Iran, with Azerbaijan and Armenia, with Russia and Ukraine, with North Korea and the United States. “In short,” the author sums up, ““ One belt, one path ”is built in such a way that it really works.”

As for the Middle East, Chinese appetites are growing rapidly.

According to the results of 2017, we note that natural gas imports to the PRC grew to 68,6 mln. Tons, or by 26,9%, and oil imports - to 419,57 mln. Tons, or by 10,2%. One of the largest local gas exporters to China is Qatar. Chinese are buying oil from Saudi Arabia, Iraq and Iran. Saudi Arabia was the main supplier of oil to China, and in 2016 — 2017. she rolled back to second place after Russia. As a result, it can be stated that China has a certain energy dependence on the region and at the same time either is already the most important economic and trading partner of local states, or will soon become one. Money for it in the Middle Kingdom do not regret. Beijing has invested billions and again billions in Iran, Iraq and the Arab monarchies, and in the future, the newspaper reminds "Sight"It intends to create here a free trade zone with the countries - members of the Cooperation Council for the Arab States of the Persian Gulf.

And the Chinese will succeed. In fact, they are building their bright future. Rather, the present. A bright "future" is, as is known, the lot of Russia.

China knows how to get on where Russia expresses “concern”, and the US is completely furious, pointing at Iran and accusing it of “sponsoring terrorism”. China has an economy in front, and politics follows it like a cart after a horse. This is the Chinese national idea: more yuan and dollars, more goods and services, but less political talk. As a result, Western analysts acknowledge that the Chinese initiative “really works.”

For example, China is successfully developing relations with Israel. The Chinese are building container terminals in the Ashdod port, a metro station in Tel Aviv and digging a tunnel on Mount Carmel in Haifa. In the meantime, they spy on advanced Israeli technologies in medicine, alternative energy sources, and agriculture.

Israel has a local enemy - Iran. However, Beijing is friends with him. Beijing was friends with Tehran and in times of serious sanctions. Over 2017, the two countries' trade increased by 22% (30,5 billion dollars). It is curious that the Iranians in calculations with the Chinese pay not in dollars, but in yuan.

As a result, where it is difficult for Moscow and Washington, Beijing is successfully promoting its “belt.” Beijing manages to balance between Israel, Iran and Saudi Arabia, between Shiites and Sunnis, maneuvers between the “interests” of the United States and Russia in the Middle East and establishes strong ties where other seekers of gains are hindered by politics.

The economic “belt”, which is tightening around the planet tighter, helps China to grow rich. Political power, as it is known, derives precisely from economic wealth, and not from slogans about “exclusiveness”, “special mission” or “super-ethnos”.

Observed and commented on Oleg Chuvakin
- especially for topwar.ru
Ctrl Enter
Noticed oshЫbku Highlight text and press. Ctrl + Enter
We are
Results of the week. "God forbid to see Russian revolt, senseless and merciless!"Strangulation: the context, conduct and consequences of the American naval blockade of China
Military Reviewin Yandex News
Military Reviewin Google News
56 comments
Information
Dear reader, to leave comments on the publication, you must sign in.