A national war on guard of independence

February 28 2018
11
It is generally believed that at the moment state sovereignty and the ability to pursue an independent policy based on national interests can only be guaranteed by the presence of a nuclear missile shield. 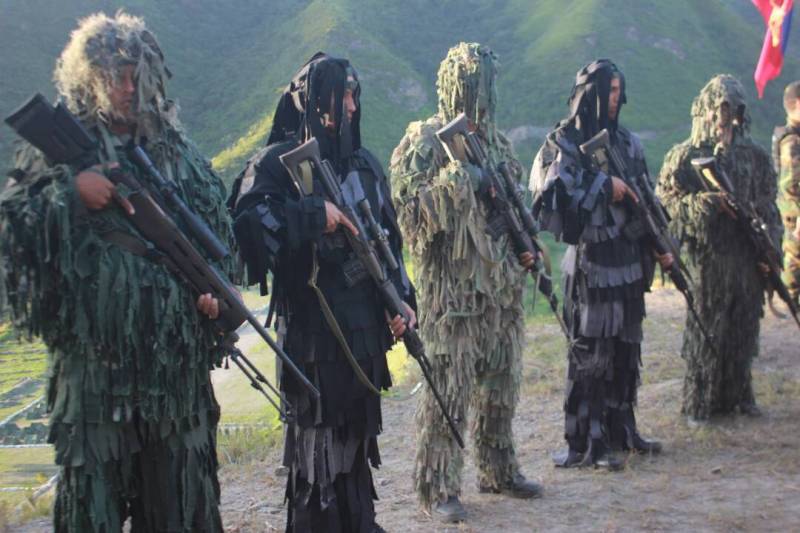 It is known that after the Caribbean crisis, which ended with the withdrawal of Soviet missiles from Cuba, the then leader of the DPRK, Kim Il Sung, decided to launch a national nuclear missile program as the only way to protect against the threat of a new US aggression.
However, you can defend your sovereignty without nuclear weaponsAs evidenced by the experience of the same Cuba, which after the collapse of the USSR was left without external protection and assistance, with very limited resources.

Despite this, the United States did not dare to commit aggression against the Island of Freedom so hated by it.

The main reason for this is Washington’s understanding of the fact that an attack on Cuba would cost an unacceptable amount of casualties. Since this country not only has well-trained and disciplined armed forces capable of becoming a serious problem for the aggressor, but also subdivisions of the territorial people's militia. Million milsanos are ready to defend one and a half thousand pre-prepared fortified areas and defense lines. And after that, in the event of the defeat of the regular army, they must make the ground burn under the feet of the invaders. Tens of thousands of trained snipers and sappers, secret warehouses with mines, explosives and MANPADS make this prospect quite real.

This defensive concept of the “National War,” proclaimed by Fidel Castro, is now adopting Venezuela, against which the United States launched a hybrid war.

Attempts by Washington to organize a color revolution in the country, and then to raise an armed insurrection failed, including due to the fact that the armed forces and law enforcement agencies of the country remained loyal to the people and their elected authorities.
However, the rebels, having failed to seize power, or unleash a civil war, turned to sabotage and terror. So, February 23, unknown saboteurs blew up the substation, as a result of which eight states of Venezuela were left without electricity.

The country's electric power minister, Luis Mott Dominguez, announced signs of sabotage, suggesting that the saboteurs want to destabilize the situation before the presidential elections scheduled for April 22 of this year.

And on February 26, Venezuela’s Minister of Transport, Carlos Osorio, said that the railway guard was able to prevent a terrorist attack that could lead to more victims - the terrorists were trying to derail the passenger train Caracas - Kua.
In addition to the widespread opposition of the terrorist war, the threat of external aggression against Venezuela, which may become real, after almost inevitable provocations during the upcoming elections cannot be ruled out.

That is why he turned to the Cuban concept, which seems to have formed the basis of the country's defense doctrine, as Nicholas Maduro said ten months ago - in April 2017 of the year, stressing that he intends to bring the number of militia to 500 000 fighters armed with everything necessary to confront invaders.

"We approached the goal in 500 thousands, then to move towards the main goal, which Comandante Chavez bequeathed to us - organizing and training 1 a million militiamen to protect the sovereignty of the motherland," the Venezuelan head set the tasks.

Confirmation that the goals outlined almost a year ago were achieved were the large-scale military exercises that took place on February 24-25 in the whole territory of the country, in which, in addition to the Armed Forces and law enforcement agencies, the Milissos took part. In total, more than a million Venezuelans participated in the event, and they showed high efficiency and coherence of the actions of the security forces and the people's militia in providing “multi-level and comprehensive defense”.

The legend of the past teachings is more than eloquently their name - “Independence 2018”.

Speaking about the specifics of military construction in Venezuela, it is necessary to recall the events of April 2002, when some officers attempted a military coup that ended in failure.

In most countries of Latin America, the military is a kind of closed caste, and traditionally adhere to right-wing views. A significant part of the officer corps are trained in the United States, where some of them are subject to direct recruitment by American intelligence services.

Others turn into “US friends” after brainwashing at the Institute of the Americas, or through initiation in secret societies. In other words, among the national armies of Latin American countries, agents of influence of Washington are more than enough. Sun Venezuela were no exception, which resulted in the 2002 coup of the year, fortunately, failed.

But after that in the army and navy serious changes followed, not limited to ordinary personnel cleaning. Deep changes took place that destroyed the caste army and law enforcement forces. The remote putschists were replaced by new officer cadres who had left the masses. The priorities for admission to the University of the Armed Forces were revised.

Moreover, on the basis of this main military educational institution of the country began mass training of commanders for the people's militia - ten thousand students per year.

In addition, military facilities began to be used as training classes, thanks to which people living in remote corners of the country have the opportunity to learn not only the possession of weapons and other aspects of military craft, but also general educational disciplines. This not only increases the literacy level of the population, but also strengthens the interaction and the level of trust between the military and the people, which contributes to the realization that the defense of the country is not only the task of the Armed Forces.

The fact that the ongoing military reforms proved to be correct is evidenced by the fact that during the current attempt at insurrection, the loyalty of the soldiers and officers of the Venezuelan army to the oath was unshakable. A political crisis caused a massive influx of volunteers into the ranks of the national militia. This is currently a well-prepared and trained structure. The military personnel commands the people's militia, but the detachments themselves consist of workers, peasants, teachers, students, and civil servants. The functions of junior officers are performed by citizens who have undergone special training at the University of the Armed Forces.
It is noteworthy that it is the Bolivarian people's militia that causes particular concern to the United States.

In particular, the director of the CIA, Mike Pompeo, said that there is an increase in the risk that Venezuelan armed militia "will act without control," and the expansion of their troops will lead to "uncontrolled proliferation of weapons." Pompeo voiced these concerns during a hearing in the US Senate of the Committee on Intelligence on Global Threats.

“The risk that these groups will act out of control increases every minute,” said Pompeo with pathos, noting that “Huge flows of weapons circulate in Venezuela, and this is an incredible real and serious risk, a threat to South America, Central America, and not just for Venezuela. ”

He was supported by National Intelligence Director Dan Coates, who said during the hearings that "in Venezuela, an unpopular autocratic government will resort to increasingly repressive measures to pacify political opponents and street riots."

That is, Coates tried to draw a parallel between the Bolevarian militia and the “death squads” that the American intelligence services implanted and implanted not only in Latin America, but also in the Middle East, in the Balkans, and now in Ukraine, without bothering about the associated with them, the "circulation of huge flows of weapons."

However, this speculation of the head of the US National Intelligence is too obvious. After all, the militia units are designed exclusively to fight the external aggressor, while the forces of law and order quite successfully cope with the rioters and participants in the riots.

Americans are completely worried about the presence of a nationwide armed and trained, including partisan war, highly motivated militia, can make intervention, even in this oil-rich country, too expensive for the US pleasure.

Ctrl Enter
Noticed oshЫbku Highlight text and press. Ctrl + Enter
We are
Situational analysis of the death of the MH17 flight (Malaysian Boeing 777), made on the basis of engineering analysis from 15.08.2014Results of the week. “In our cooperative, the board is always agreed”
Military Reviewin Yandex News
Military Reviewin Google News
11 comments
Information
Dear reader, to leave comments on the publication, you must sign in.